The Lope: Rt 66 in outer LA: Neon Jewels in the Suburban Sprawl

Rt 66 in outer LA: Neon Jewels in the Suburban Sprawl

They're not suburbs, exactly, but you'd never know it. Route 66 changed after we reached the San Bernardino/Rialto area; it is now one long sprawl of businesses, mostly relatively new ones. If you are in love with the wide open spaces of the mother road east of here, you'd best have a meal at the Summit Inn or stay a night at the Wigwam Motel and then turn back.

But if you are open-minded and willing to drive quite a while to see that cool neon sign or an eatery the locals rave about, keep going. You'll even see echos of the history of this area in the place-names, many of which are taken from old rancheros.

This next post of Route 66 pictures was shot August 4th and 5th, 2005, while back-tracking from LA. Some of them were done in a relatively leisurely fashion (5-minute stops here and there) while others were shot on the fly from a moving car at dusk, in traffic and with a digital camera that has the usual delay. Its not easy to drive or navigate and shoot pictures too, or reasonable to ask one's friends to go around the block, find a parking place or let me out and circle to pick me up again. Still, they did it anyway a few times. I'm just lucky that way.

Even Ace stayed in the car for most of this stretch, having discovered that we would stop for neither food nor beautiful women. 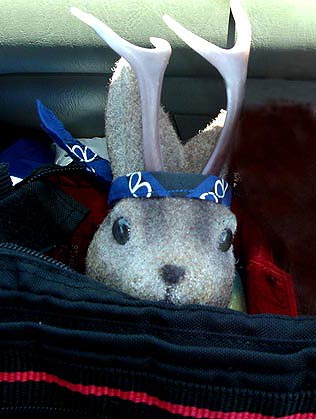 The pictures vary widely in quality, but they *are* all views along Route 66, and as such, may be useful for planning your own trip. Regardless of when they were actually shot, I have arranged them in a linear east-to-west fashion as if one were driving from Rialto to outer LA.

Sometimes the contrast between "old" route 66 and "new" route 66 is surreal. Case in point: the last orange juice stand. Time was, citrus farms dominated this region and orange juice stands dotted the sides of the mother road. There is one left, and it's in Fontana. We knew that; we looked for it. We missed it.

Because it now resides in the parking lot of a Wal-Mart supercenter, thats why...too surreal, even for me. But, we did get a good taste of what Route 66 still has to offer in the way of architecture and signage in the vast suburban sprawl that is the outer Los Angeles area.

There's nothing like a dinosaur to catch one's attention from the road. These big metal ones are at Route 66 Memories, 10150 Foothill Blvd, Rancho Cucamonga, CA. We just drove by, but their website says the business is family owned and operated by Rosa and Gilbert Ramos in a century-old restored house. Aside from dinos, they carry artwork, antique mission-style furniture, Rt 66 memorabilia and a few wooden tikis.

Being from Kansas, the New Kansan Motel sign in Rancho Cucamonga caught my eye. 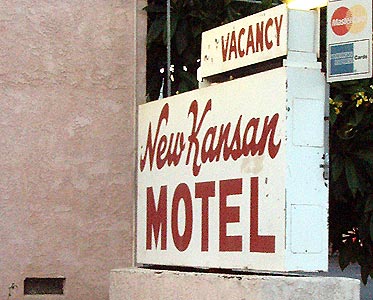 Is this a reconnaissance photo of an Imperial tracking station on the planet Endor? (Sorry...geek Star Wars reference there) 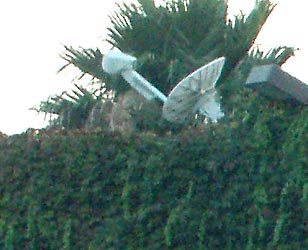 No, it's ivy-covered Carl's Liquor and Mart and The Deli in Rancho Cucamonga.

Now here's a place I wish we'd have explored...one of those "shoot it now, research it later" cases. 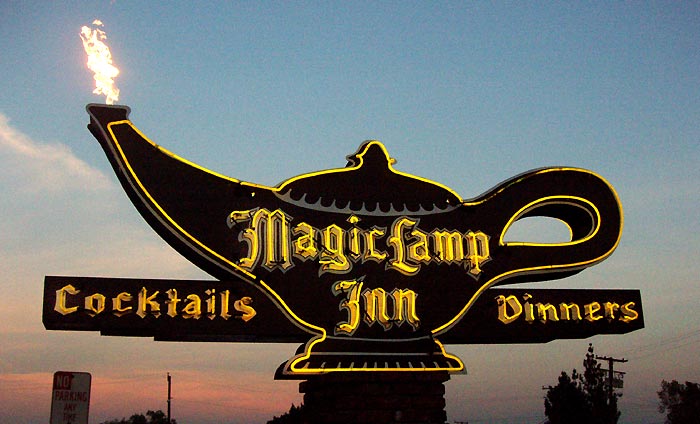 The Magic Lamp Inn at 8189 Foothill Blvd. in Rancho Cucamonga, CA is labeled a "Retro Pit Stop" by Frommers: "...consider the Magic Lamp Inn, 8189 Foothill Blvd., open for lunch and dinner Tuesday through Friday and dinner only on Saturday and Sunday. Built in 1957, the Magic Lamp offers excellent Continental cuisine (nothing nouvelle about Route 66!) in a setting that's part manor house and part Aladdin theme park. Dark, stately dining rooms lurk behind a funky banquette cocktail lounge punctuated by a psychedelic fountain/fire pit and a panoramic view. The genie-bottle theme is everywhere, from the restaurant's dinnerware to the plush carpeting, which would be right at home in a Las Vegas casino. Lovers of kitsch and hearty retro fare shouldn't pass this one up."

On to Glendora, a town that was named by one of its large land owner's after the "glen" behind his house and his wife, "Ledora." I've read that, despite a recent exterior remodel, the Golden Spur at 1223 E. Route 66 in Glendora, is over 80 years old. Its a conventional steak and seafood place now, but it began as a ride-up hamburger stand for equestrian enthusiasts. I just know it has a really cool neon sign. 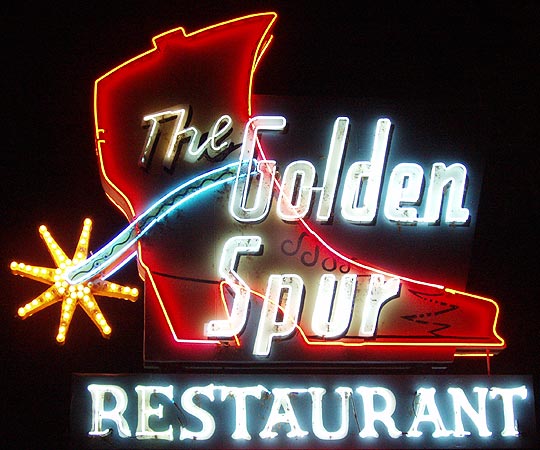 The Palm Tropics Motel, 619 W Alosta Ave (Rt66), Glendora, CA is credited on some websites as being very well maintained.

The Hat World Famous Pastrami has ten locations. This one is at 611 West Route 66 in Glendora; I don't know if it actually dates from 1951 or if that just refers to the chain, but I loved the sign. If I'm ever back this way, I really want to try the pastrami, based on reviews like this one, this one and this one. 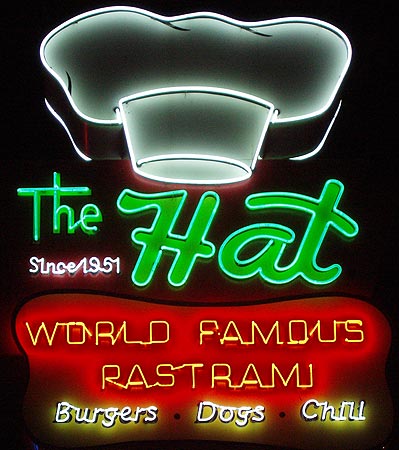 I just saw the Oak Park Motel, 925 E Huntington Dr, Monrovia, CA out the car window and took a quick picture. It is now listed online under apartment rentals so it may not be a motel anymore. In many towns, this would be the coolest neon sign around. 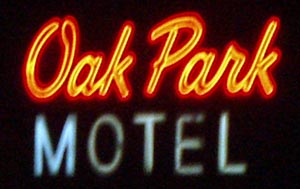 I couldn't find out much about Rod's Grill, 41 W. Huntington Dr. in Arcadia, CA. It's another case of stopping to shoot a sign and blasting onward. 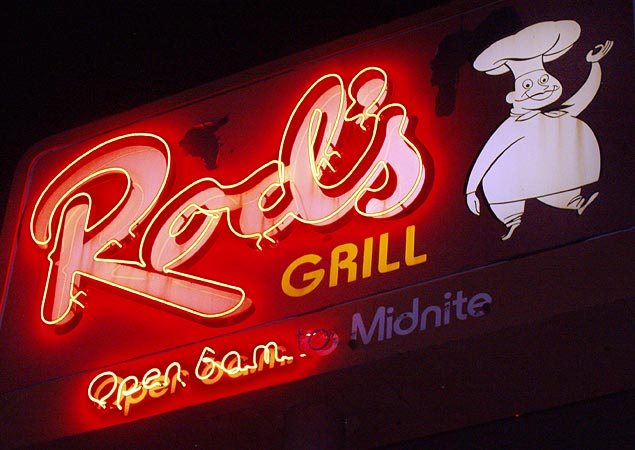 The building looks like a possible 1950's or 60's coffee shop; it had closed for the night when we drove by. Update: Route 66 News has brought to wider attention an article at San Gabriel Valley Newspaper Group's sgvtribune.com which mentions that Rod's Grill is in danger of being seized by the city of Arcadia via eminent domain in order that a car dealership might expand.

This is no ordinary Denny's. The chain diner at the corner of Santa Anita and Huntington streets was originally a Van de Kamp's coffee shop and retains the neon windmill on the roof. 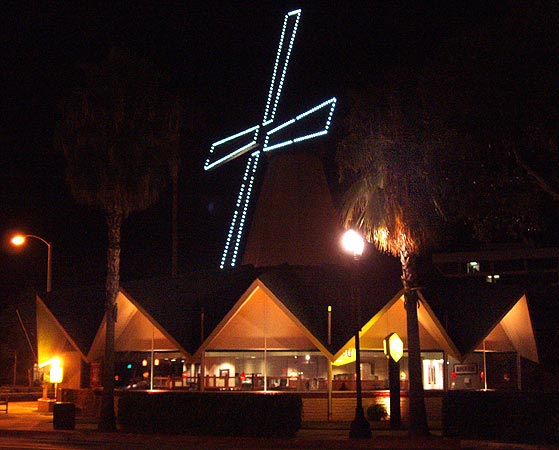 The neon sign for the Original Whistle Stop is a case of something that was satisfying to photograph, but even more interesting when I researched it later. It dates from 1951 and was at a previous location of the store. When the business moved to this location at 2490 E Colorado Blvd, Pasadena, CA in 1988, the city councel labelled the sign an "eye sore" and refused to allow it to be installed. 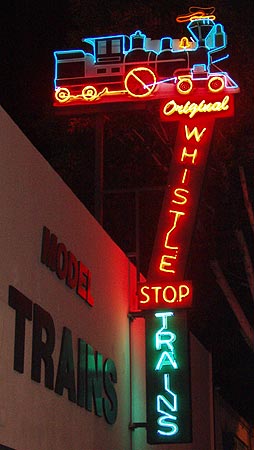 The situation was remedied when the Pasadena Cultural Heritage Foundation helped the sign to be named as a California Cultural Historical Landmark, which cleared the way for its installation.

I found the Hiway Host Motel, 3474 E. Colorado Boulevard, Pasadena, CA, on a couple of consumer motel rating sites, but no reviews were listed for it. The sign had a neat shape which does not show up in this night shot. 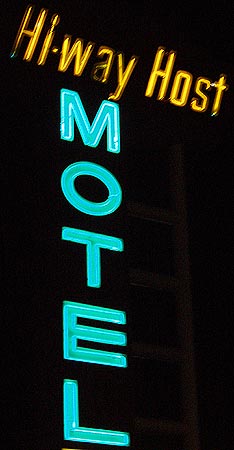