The Lope: "Here are a host of signs you may see" - California Route 66 Museum

Ace discovers many wonderous things, like this Green Spot Motel sign, at the California Route 66 Museum in Victorville, CA. 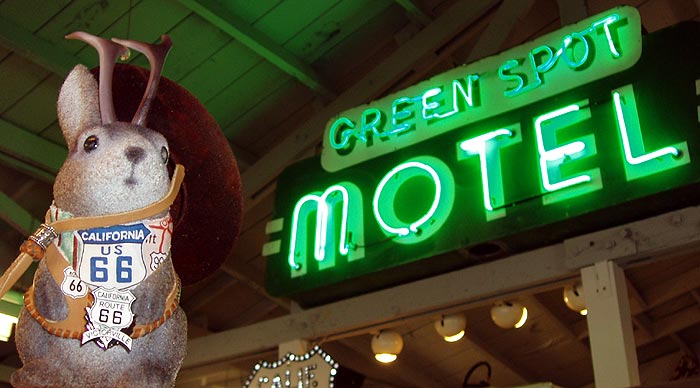 It was August 4, 2005, the sixth day of our Joplin to LA roadtrip. It was raining in Victorville, CA and we made a spontaneous stop at the museum.

A major attraction of the museum is its collection of Hula Ville artifacts. Hula Ville, also seen spelled as "Hulaville" and "Hula-Ville", was the creation of Miles Mahan, who, starting in 1956, turned his small patch of the Mojave desert along Route 66 roughly near Herperia, CA, into a site that would eventually be listed in the registry of Califonia State Landmarks as an example of 20th century folk art. He decorated the land with bottles, signs scavanged from other sites, signs he painted with his own sayings, and other found objects. The cowboy below was originally the welcome sign for the Hesperia Businessman's Association. 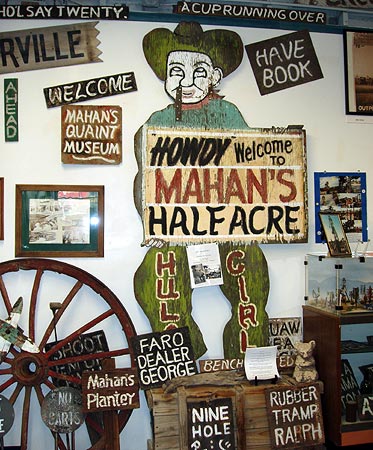 Mahan was a retired carny - a career guess-your-weight man - who lived in a trailer without plumbing or electricity even though newspaper reports classified him as "wealthy." He reportedly lived on eggs, roadkill rabbits and, possibly, wine. He collected the many bottles that were strewn on his land and mounted them with nails onto fence posts which he called his "Cactus Garden", an example of which is shown below. Near Oro Grande there is a folk art site which may have been inspired by Hula Ville. 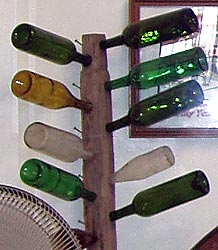 What was his motivation? I have read that he built Hulaville as a tribute to fallen hobo friends to whom he dedicated signs in a sort of Boot Hill Cemetary. Some of his memorialized friends were: Rubber Tramp Ralph, Steam Train Wagner and Shoot Em up Charlie. If you want a real treat, listen this 1993 sound portrait of Miles Mahan at Hula Ville by National Public Radio reporter David Isay.

Two years after that interview, in 1995, Mayhan moved to a rest home and Hula Ville began to deteriorate. Fortunately, museum volunteers disassembled the site and the museum currently displays a good chunk of Hula Ville. Miles Mayhan died in 1997 at the age of 100, but Hula Ville, in bits and pieces, lives on. 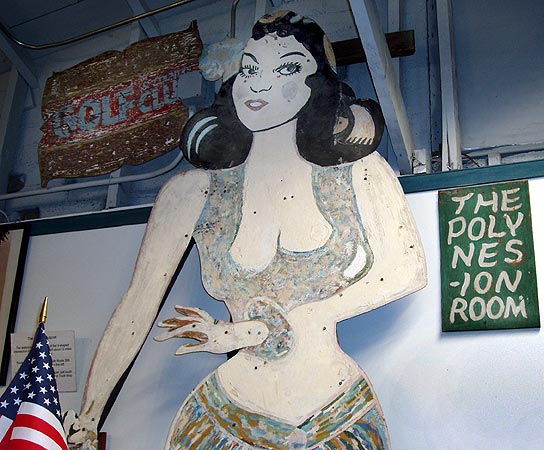 This hula girl sign was salvaged by Mahan from a Polynesian restaurant that had discarded it. It was the centerpiece of Hula Ville. "If it wasn't for her, I wouldn't be here", he said in the interview with Isay. 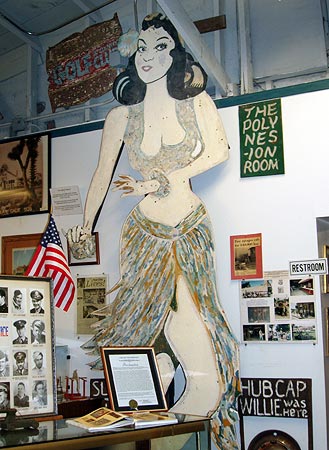 The sign is twelve feet tall, and various reports I've read say it was 14 or 16 feet tall when it was mounted in Hula Ville. 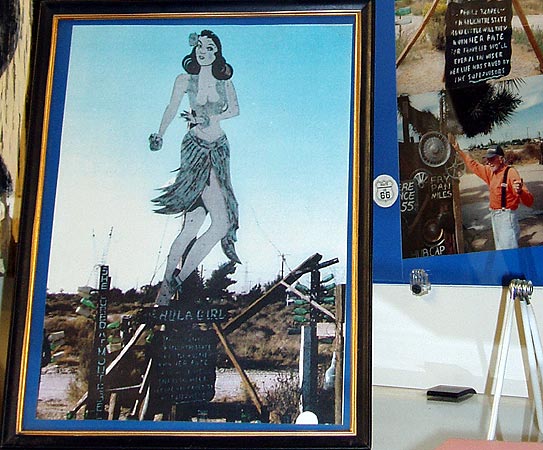 The photo above shows the sign in place at Hula Ville; at right you can see a photo of Mahan from a collection posted in the museum. 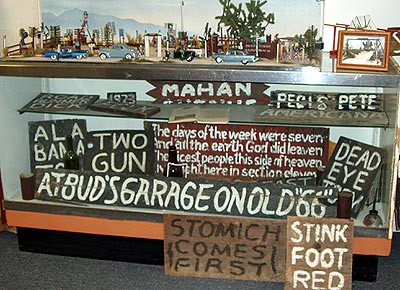 Museum volunteer Steve Anderson built a 1/25 scale model of Hula Ville (above, on display case) based on photographs. He says the construction took him 2 1/2 months and 23 tubes of Super Glue. To simulate the bottles Mahan used, Anderson sharpened dowel rods in a pencil sharpener and painted them green for Mountain Rhine or bronze for Hearty Burgundy. 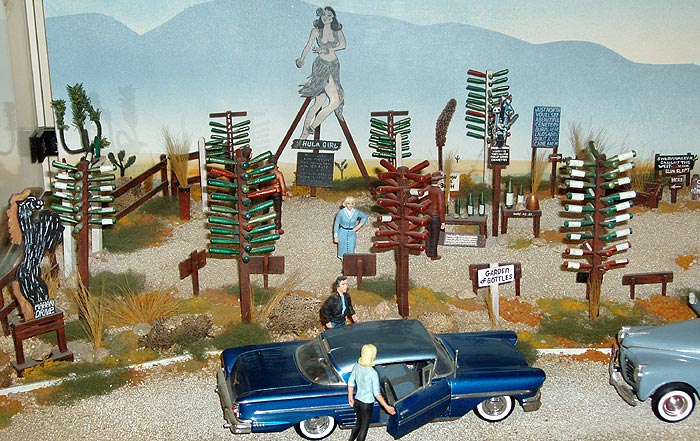 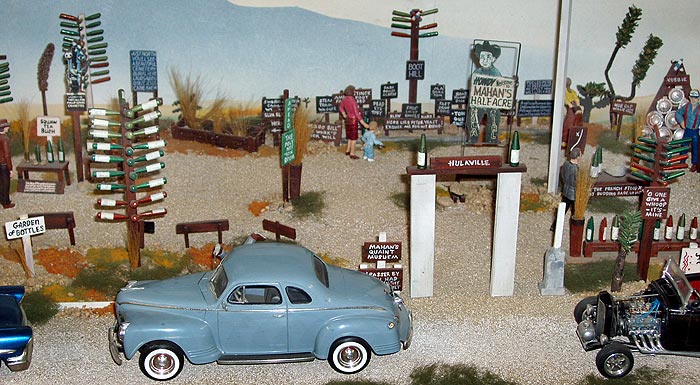 The Joshua Tree was made from pipe cleaners, masking tape and branches from an artificial Christmas tree. 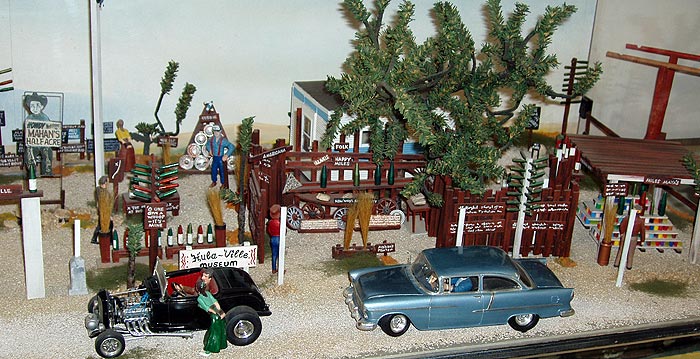 Hula Ville is gone now...but one can still get a feel for it, thanks to the efforts of people who didn't wait too long to preserve its quirky charm. 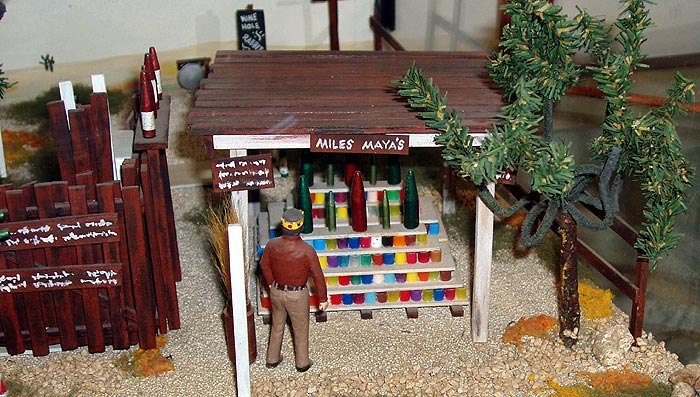 Mahan was also a poet; at the end of the tours he gave of Hula Ville, he would sometimes ask visitors if they wanted to buy a book of his poetry. He is also known to have read to visitors sometimes. This is his poem, Hulaville:

"Yea so welcome are all of thee
To this museum so full with glee
Here are a host of signs you may see
So cleverly painted by old Mile-zee."

Roy Rogers and Dale Evans lived in Victorville for many years. After their deaths, the Roy Rogers Museum moved from Victorville to Branson, MO, but Rogers is still identified with this community. 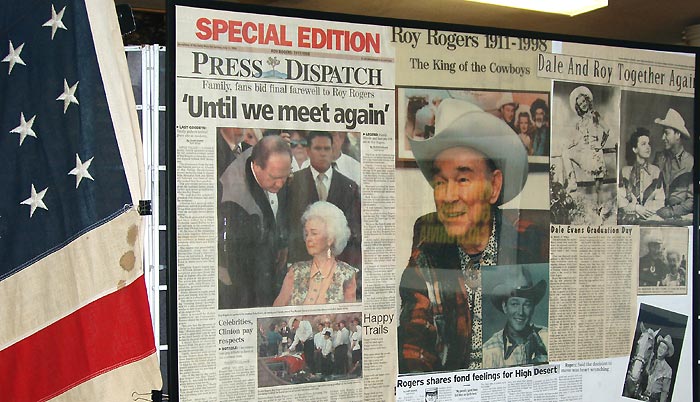 A vintage 7-UP sign recalls a more psychodelic era. 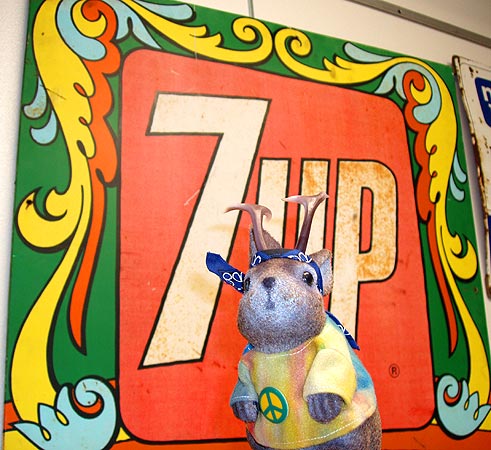 A collection of old pedal cars is set against reproduction Burma-Shave signs. 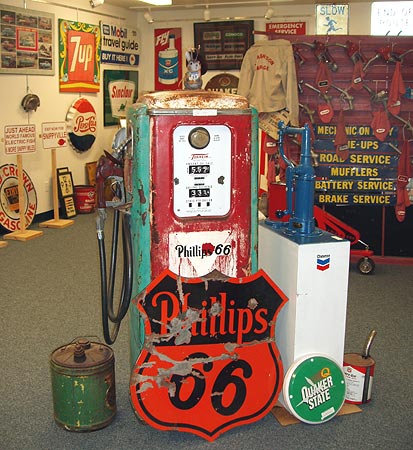 Chick Kirk, President of the California Route 66 Museum (left), and volunteer Paul Chassey answered questions about where we'd been as well as where we were going. They also sold us some inexpensive new Rt66-themed luggage cheap that we're using to this day. 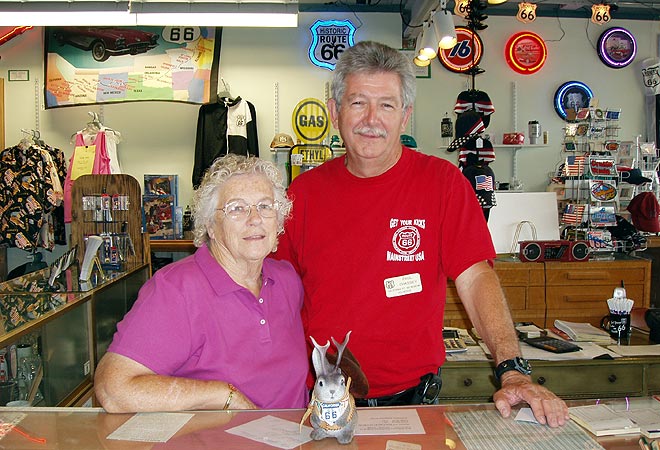 Next post: On your way from Victorville to Rialto, stop at the Summit Inn and learn your fortune. 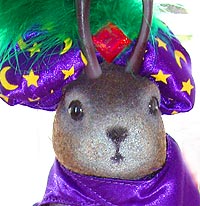 I have certainly been enjoying the photos and narrative about the Route 66 tour. I know you probably wonder if anyone is out there sometimes. I am and I look forward to your continued adventures.

Greg, you called the Museum the other day looking for more info on the HulaVille Girl. I spoke to Chick Kirk our Museum President and she had a little more to share. Miles and Chick had a conversation about the Hula Girl and this is Chick's recollection. ( MIles may have told others a different story as I understand he was quite a character.) The Hula Girl was a feature of a Polynesian restaurant and we are pretty sure it was located in the vicinity of Norwalk California, a Suburb of Los Angeles. One of our Museum volunteers confirmed to me that he used to patronize this restaurant with his family many years ago. Anyway according to Chick's story, Miles had been gone to the restaurant at one point and it was no longer Polynesian. He was told the Hula Girl had been sent off to salvage. Somehow he was able to retrieve it and relocated it on his property in the High Desert. When the Museum rescued the Hula Girl and other artifacts from the site, it was mounted on a pole about 14 feet high. The pole had to be cut to fit the Old Girl in the Museum where she resides today.