The Lope: Racing the sun across the Mojave

Racing the sun across the Mojave

Somewhere between the "just names on a map" towns of Bagdad and Siberia, an eastbound BNSF mainline skirts the edge of the Lava Hills to it's north, and The Old Trails Highway (Rt66) to it's south. 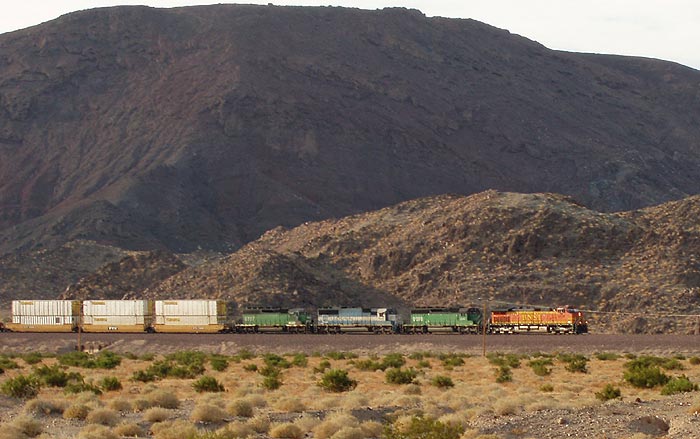 It was 6:06 PM, August 3rd, the fifth day of a roadtrip from Joplin, MO to Los Angeles. After a day that started in Williams, AZ, and included countless photo stops, we were racing the sun to see as much of California's RT66 as we could today before dark. This is ironic, because we were doing exactly the opposite of what the dust bowl refugees did; they tended to cross the desert at night to avoid overheating. My GPS told me that sunset would occur at 7:48 up the road in Barstow so I knew the time for lengthy examination of photographic targets, as I'd just done at Roy's, was over.

6:24PM: The Ludlow Coffee Shop is an interesting structure. 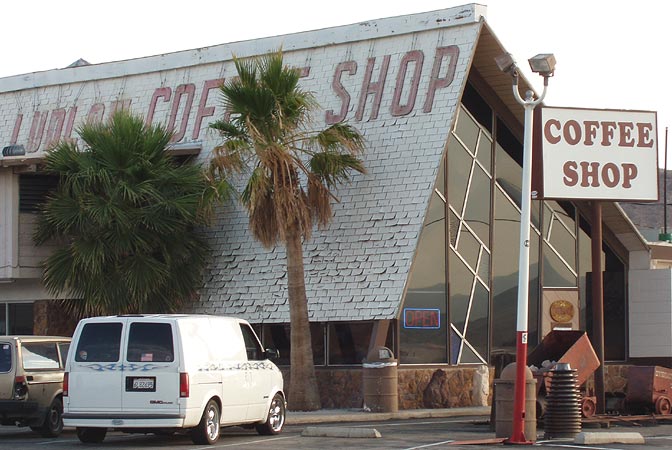 6:50PM: I wonder if this patch of pavement, just off the current drivable stretch, was a reststop at one time? Note the steep curb. 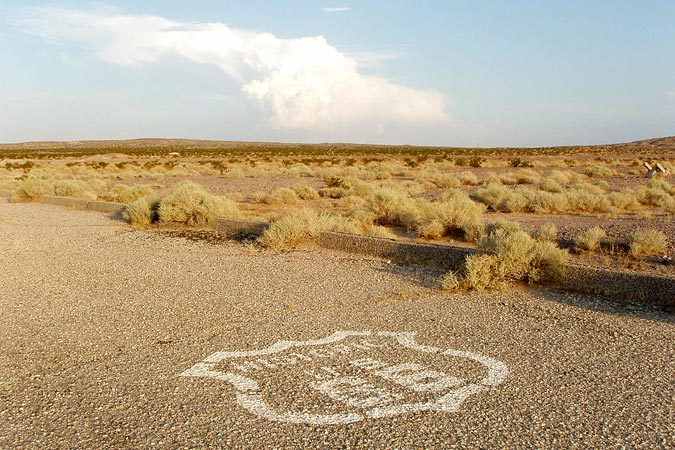 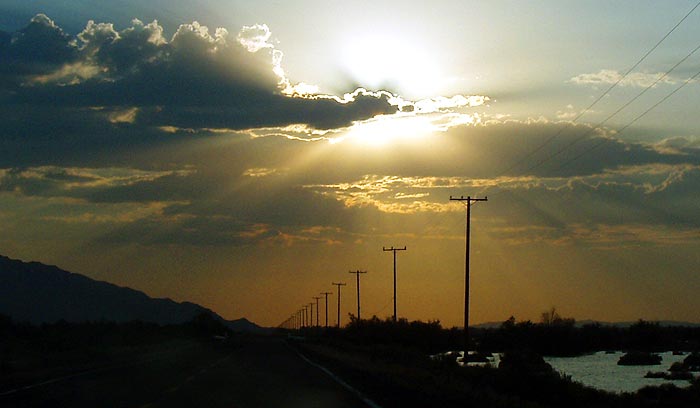 7:23PM, Newberry Springs: I've seen this referred to on other websites as Bagdad Hut, but I don't know what it is. It reminds me of the top of a four-gabled house that got buried. 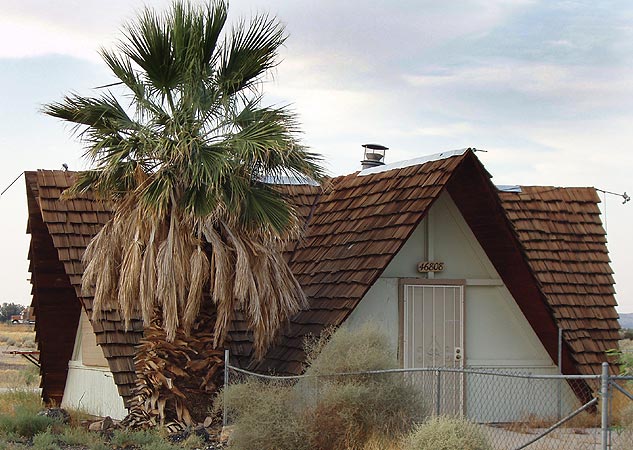 Wagon trains coming to California in the 1850's on the old Mormon Trail used to stop nearby to take on water. Three decades later in the 1880's, the Atlantic and Pacific Railroad filled tank cars with water from Newberry Springs and hauled them to area stations and towns, thus enabling further settlement in the arid Mojave desert.

7:24PM, Newberry Springs: You can see several different generations of usage on this building. The shape of the sign identifies it as an old Whiting Brothers gas station. Sometime after that, lettering on the building seems to indicate a "Tony's Italian and American dishes." A faint "CAFE" on the right end of the sign is visible but it looks like "DRY CREEK STATION" is more recent, at left. The site is fenced off now, but on websites dated as recently as 2001 I've seen it referred to as a working service station. 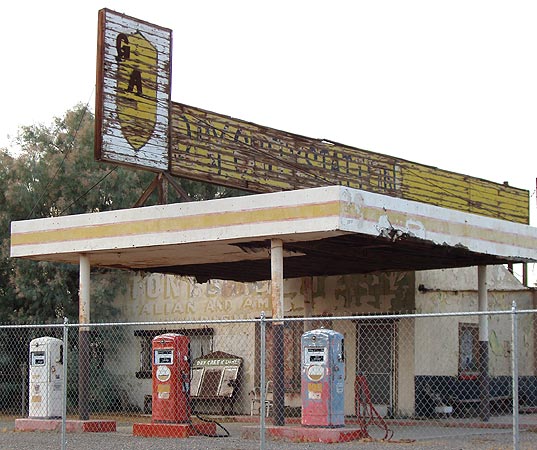 7:29PM: About a fifth of a mile west lies the Bagdad Cafe, where the 1988 movie "Bagdad Cafe" was filmed. Yes, the actual town of Bagdad was a few miles back, but there is literally nothing left of it now. This cafe was built in the 1950's and was "The Sidewinder" before changing its name in 1995 to "Bagdad Cafe" to cash in on the movie.

7:32PM, Newberry Springs: Desolation can be a beautiful thing. I never expected to see this much standing water in the Mojave. 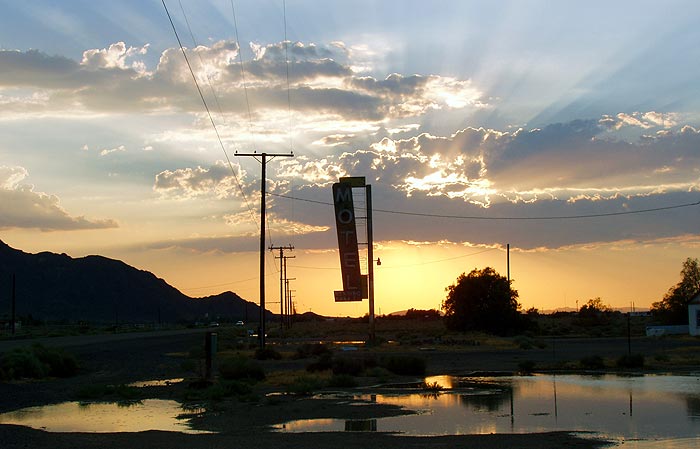 7:33PM, Newberry Springs: The other side of the sign reveals its name, the Motel Henning. 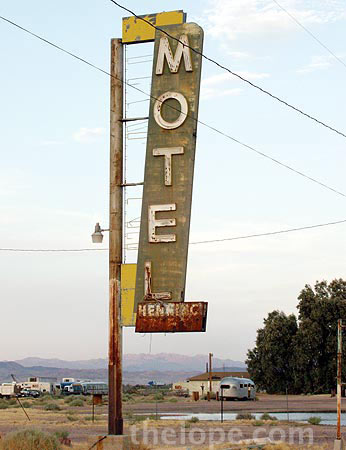 7:40PM, west of Newberry Springs: I'd been seeing this dirty white crust all over the ground for a few miles. This was in the area of Bristol Dry Lake (a rather saline body of water); borite is mined in this region and can appear as a residue on the ground, but informed sources tell me it was probably salt. 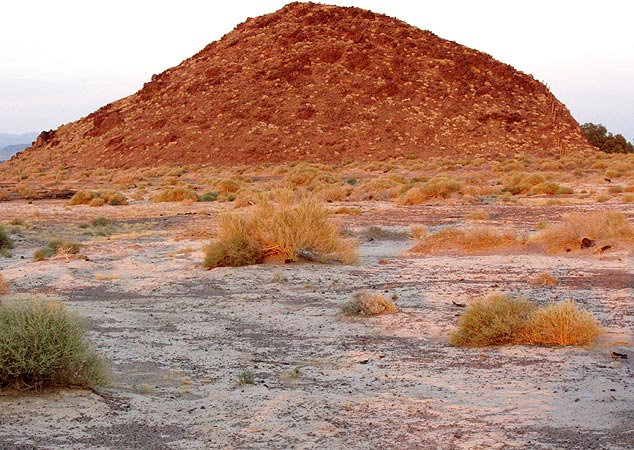 7:52PM, just east of Daggott: This was an experimental solar concentrator of the solar tower design; it was built as "Solar One" in 1982. By 1996, it had been upgraded and renamed "Solar Two."
This is how they worked: A large array of computer-aimed mirrors, called heliostats, focused all their light onto one central tower that contained water in the case of Solar One, and (more efficient) salt in the case of Solar Two. In either case, the superheated liquid was circulated and used to power conventional steam generators which, in turn, produced electricity. In 1999 Solar Two was decommissioned; it was converted by the University of Califonia in 2001 into an Air Cherenkov Telescope which measures gamma rays hitting the atmosphere.

7:56PM, Daggett: Dusk has arrived and its getting hard to shoot pictures. Its too bad the little lightbulbs in the Sportsmans Club sign aren't working. 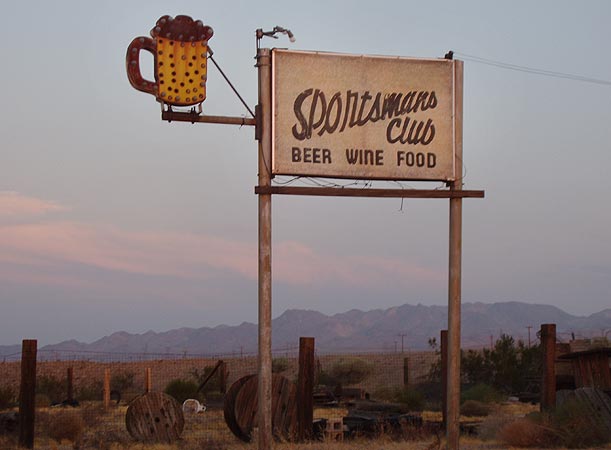 7:59PM, Daggett: This building with the oddly alpine-like curved roof dates from the 1930's and was a cafe for many years. I am told there was a Russian heritage in the area so maybe that influenced the architecture. 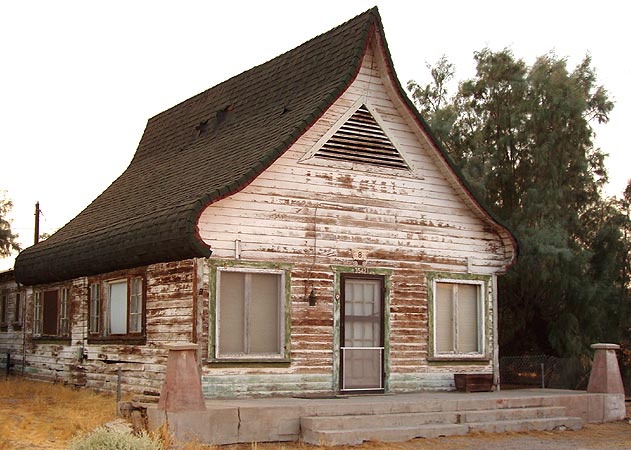 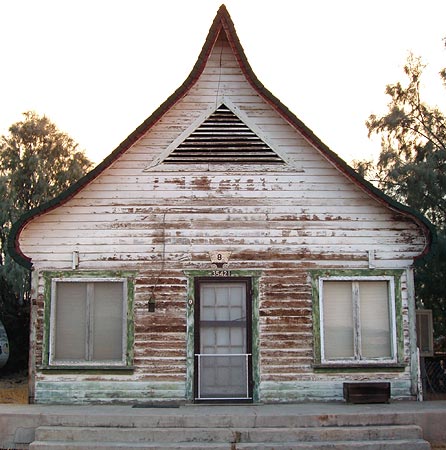 The day had grown short, and the exposures, long; it was now too late to do much of anything photographic that wasn't neon, so we hurtled on to Barstow on Rt66, seeing pavement in the headlights and the shadows of a landscape gliding by at our sides.

8:21PM: Cactus Motel, Barstow. This was my last photo of the day; we had started shooting at 7:37 AM mountain time in Williams, AZ, and finished at 8:21 PM Pacific time in Barstow, CA. It was time to grab food, then the Interstate and accelerate to Rialto, where we had a reservation at the Wigwam motel. We would return the next day to Barstow so we could see Rt66 in a linear sequence. 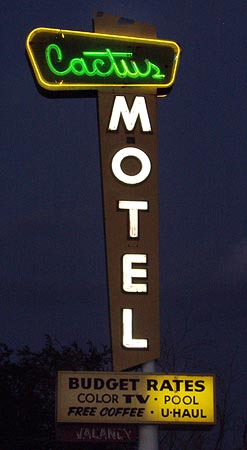 posted by Ace Jackalope at 6:04 PM

Originally opened about 1926 as a visitors information center and gas station. In the late 1930's it became the home of Mojave Deserts "Poet Laureate" Alice Richards Salisbury. Found on the net in a couple places. JB