The Lope: Twilight Zone on Route 66 - Victorville to Rialto

A Joshua tree seen along RT66 south of Victorville looks like a dancing Kachina.

August 4, 2005 - the sixth day of our Joplin to LA road trip. We'd been on Route 66 whenever possible since entering California. Rt66 is largely two-lane here and is mostly buried under Interstate 15. Scenery here is courtesy of the San Gabriel Mountains. 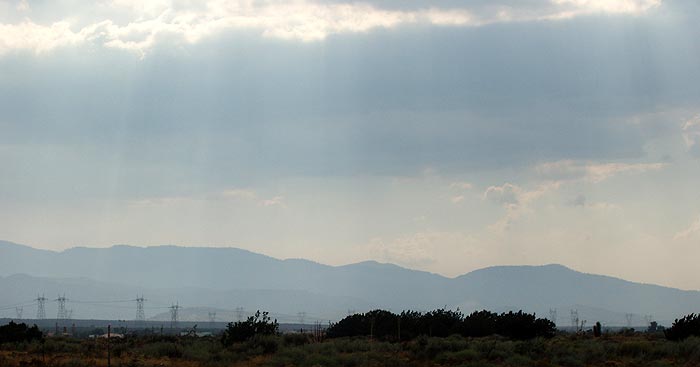 We'd heard about the Summit Inn at Cajon Pass, a Route 66 (now I-15) restaurant that has been here since 1952. The business itself is older than that; the previous building was on an earlier routing of Route 66.

This building is beside I-15, which largely covers old Route 66 at this point. There is, however, a short stretch of the old road near the building. Access is from the Oak Hills exit.

The Summit Inn seems to draw regulars as well as tourists. The place, though very authentic, also has a lot of the modern RT66 nostalgia decor...maybe a little *too* much, as it seems a little overdone. Oh well, I suppose that a business owner along the old road may need to continually reinforce that association for the sake of the casual tourist who doesn't know the history of what they've just walked into. 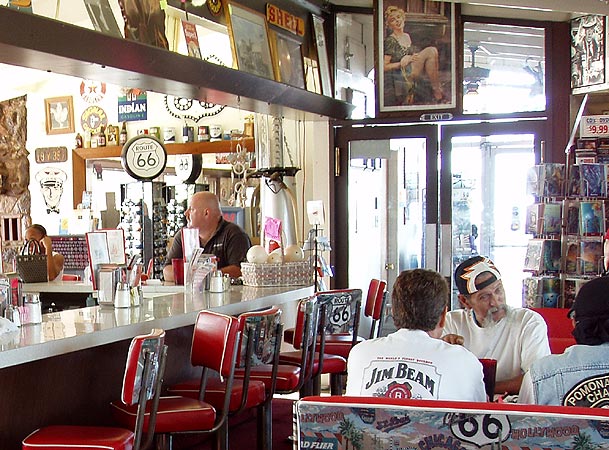 Although the Summit Inn is noted for buffalo and ostrich meat, we see a lot of that in Kansas so we opted for more conventional cuisine. It was basic, but good and filling after a hard day's work of sitting in a car seat and jumping out occasionally to walk around a bit with a camera that weighed almost 1/2 pound...exhausting, really. 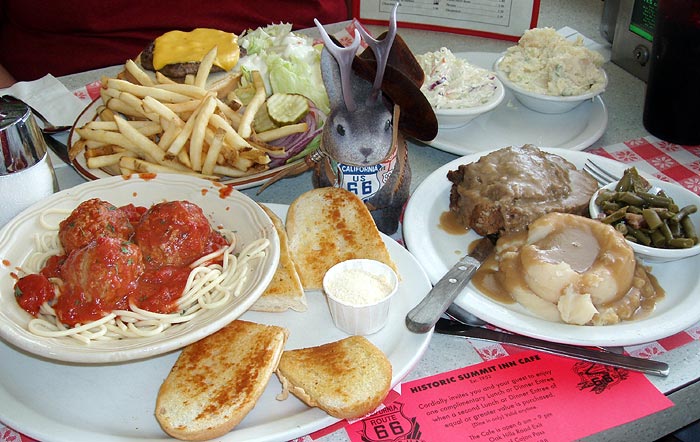 The deserts were good too. 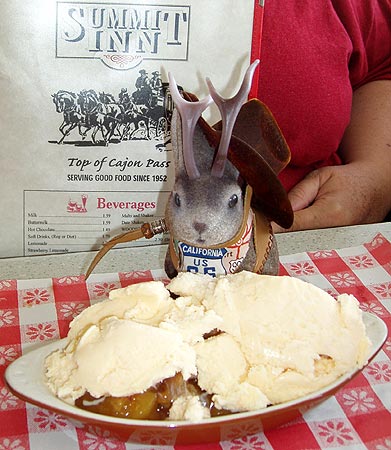 But the memorable things about the Summit Inn were the penny-operated fortune-telling napkin holders. 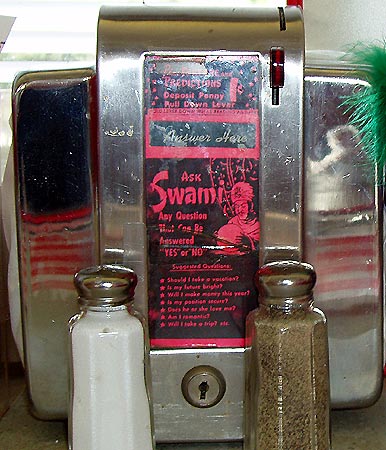 Each machine is a chrome plated gateway to... The Twilight Zone. 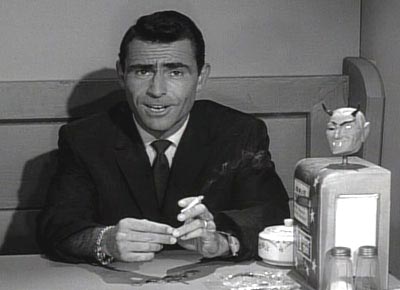 The Twilight Zone, for those of you too young to remember, was a 1950's and 60's Sci-fi/fantasy TV series hosted by Rod Serling (above). 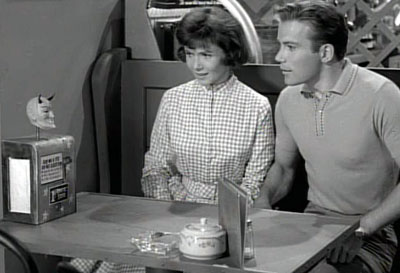 The machine in the TV show is thought by Twilight Zone aficionados to have been a studio-modified version of "Ask Swami", made by by F.E. Erickson, in North Sacramento CA during the mid-20th century. Some versions dispensed one's fate on little cards, like the one on the TV show. 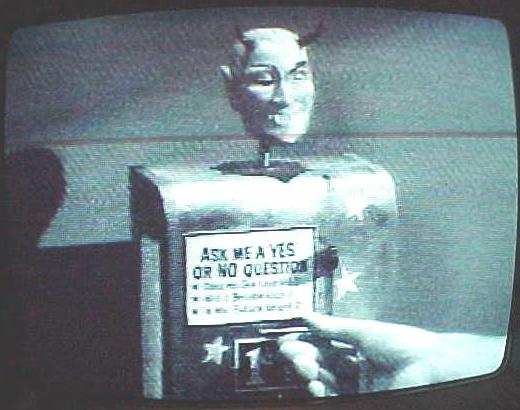 While others, like the ones at the Summit Inn, showed the answer in a window when a lever was pulled down. 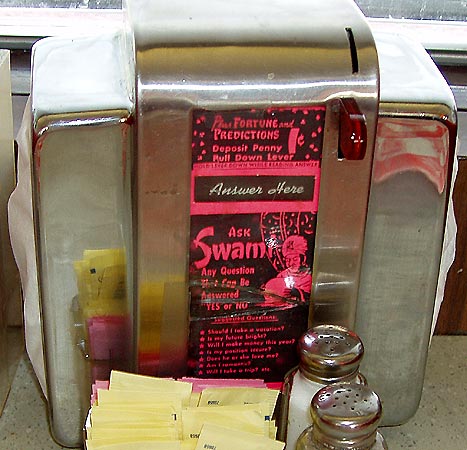 Summit Inn has at least two versions with different graphics. This is another one. 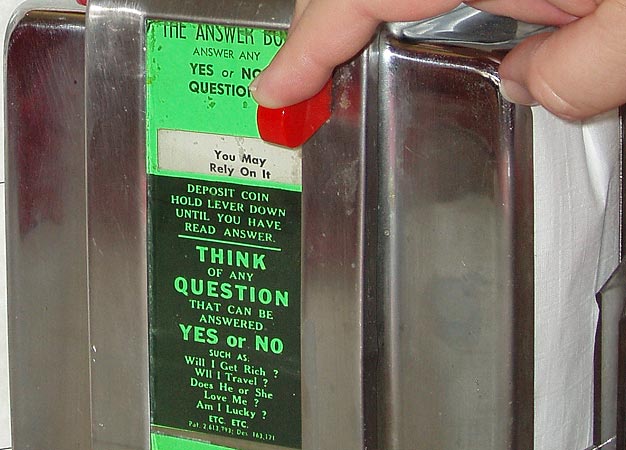 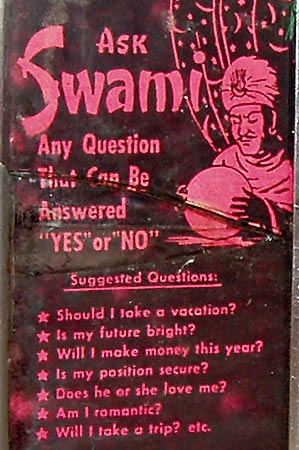 If those who study the TV show in detail are right, The Twilight Zone's prop department added a shell around the device and a devil's head on top. The actual production versions had no topper at all; we felt slighted.

Ace Jackalope improvised for us. 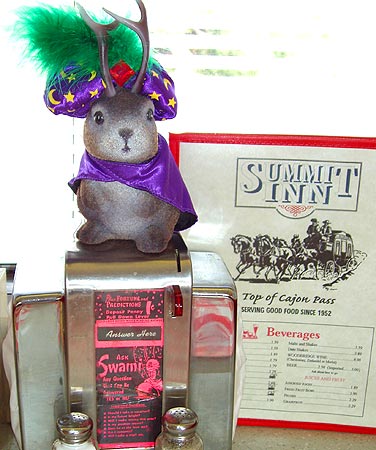 Cajon Pass itself has quite a place in the history of travel to and from California. Native Americans had used it for centuries before Spanish and Anglo explorers found it, and it was the southern end of the Old Spanish Trail to Santa Fe, New Mexico, back in the early 19th century. A 12-mile toll road was built through the pass in 1861 and linked San Bernardino and cities on the coast to the booming mining communities of the Mojave desert.

Cajon Pass enabled rail travel in the 1880's. Route 66 succeeded the old trails over Cajon Pass in the 1920's; portions of it in this area were divided, which was unusual at the time. 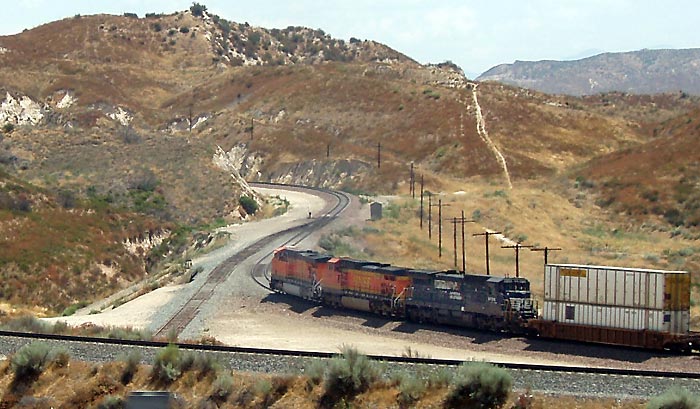 It really reminds me of a big model railroad in this view, shot from our car as we travelled I-15 over the old path of Route 66.

Between the Cajon Pass and San Bernardino, there are occasional patches of older Rt66 pavement to be seen. 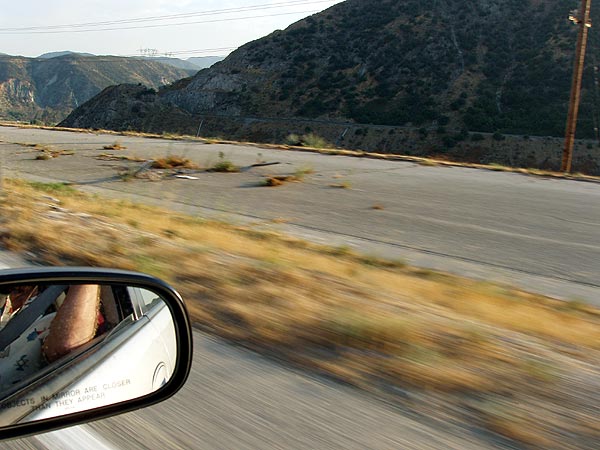 The path of Route 66 through San Bernardino is not always savory. Along with the usual beautiful works of neon sign manufacturers past, there is a feeling of decrepitude here and there, and people hanging around some of the properties can really look threatening when you stick a camera out of the car window.

According to a an online story I found from the San Bernardino Sun, dated August 22, 2004, the remnants of the El Cajon Motel in San Bernardino are owned by Bruce VonFaulstich, who has had a few problems with local code enforcement. I just hope they don't make him remove this sign. 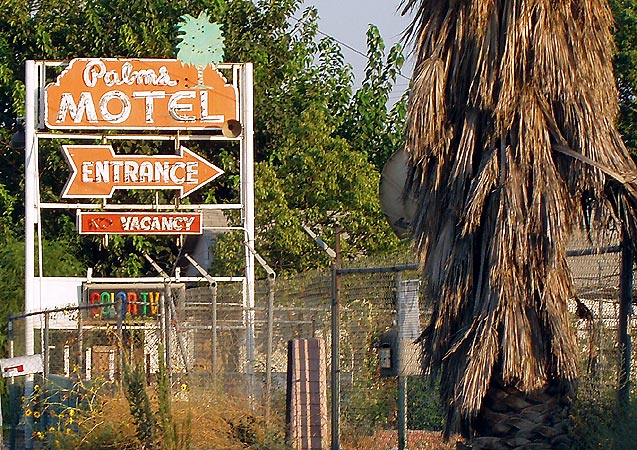 The Lido Motel, San Bernardino. The Palms, Lido, Sharene and Oasis are all listed in an online guide to motels at a ski website, but it has no reviews posted for any of them. 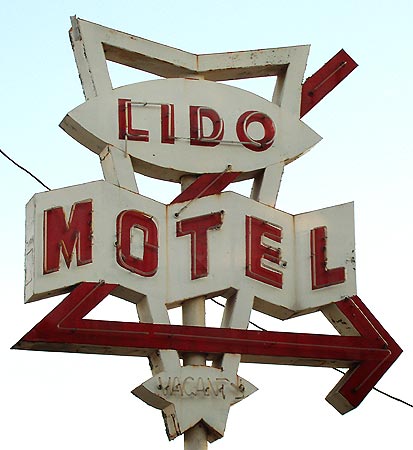 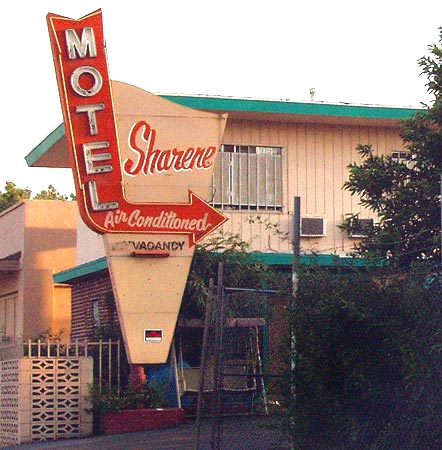 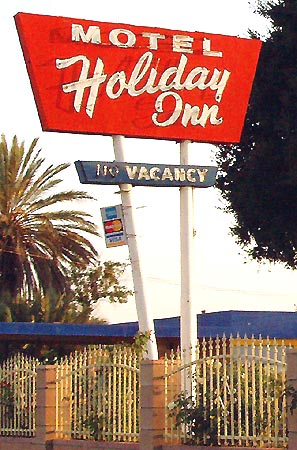 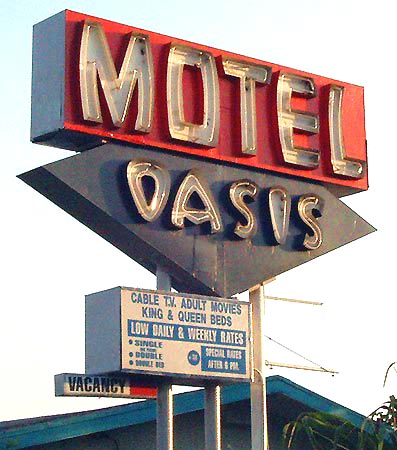 San Bernardino Motel at 2528 Foothill Blvd has a very nice "space age" sign. I missed part of it due to shooting the pic from a moving car...oh well, can't stop everywhere.

The El Rey Motel is variously listed in web sources as being in San Bernardino or Rialto. 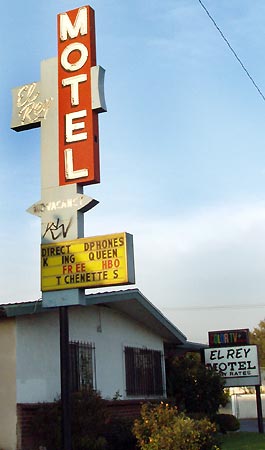 The sign for Ned's Oil & Stuff along Foothill in Rialto, CA points to a large automotive store. 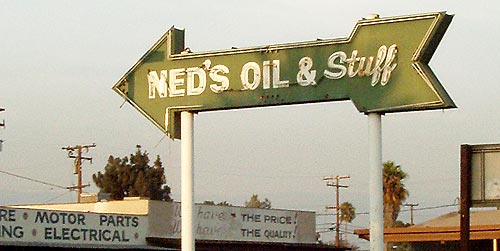 Las Playas has several locations; this one is in Rialto. It looks like the neon sign has a flame effect. 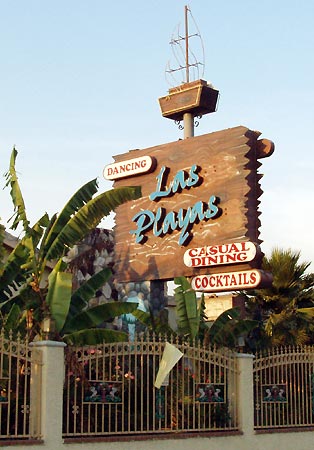 The Orange Bowl is very near our next destination, the Wigwam Motel. The bowling alley at the corner of Foothill and Pepper on Route 66 had been closed for at least ten years and changed hands as recently as February of 2002. I don't know what it sold for or what they plan to do with it, but the asking price for the parcel of land on which it stands was $1,050,000. 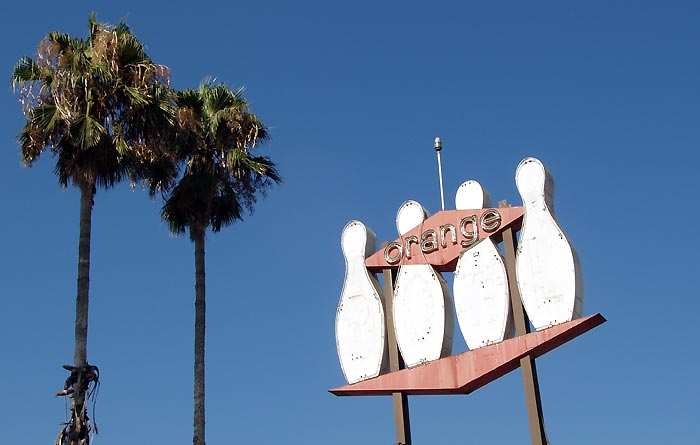 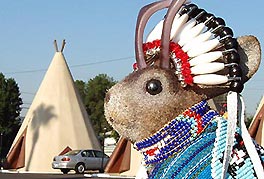 (Copyrights on the Twilight Zone, including black and white screen capture images above, may be held by MGM Television, Cayuga Productions and/or CBS Television.)

posted by Ace Jackalope at 7:40 PM

Great Pictures. Thanks for posting them.

Exciting these pictures are worth a million $. Thanks