The Lope: The Last Wigwam 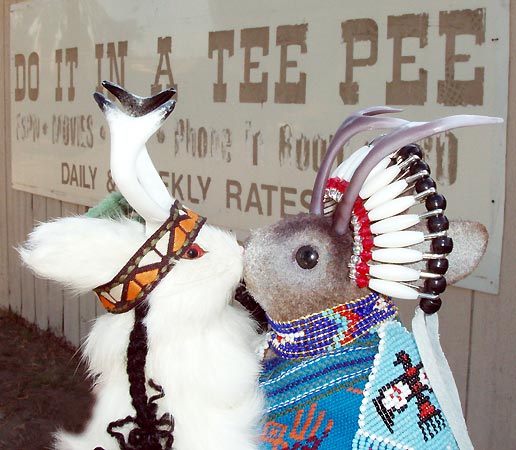 I previously wrote quite a bit about the history of the wigwam motels when I stayed at the one in Holbrook, AZ May 17, July 31 and August 1 of 2005, the last being just a few days before this. I'd also stayed at the one in Cave City Kentucky two years before. I was very eager to finish my collection of Wigwam Motel stays with this one on August 3rd and 4th of 2005.

This was the last Wigwam Motel built by the founder of the small chain, Kentuckian Frank Redford. He sold his motels in Cave City, KY, and retired here in Rialto where he build Wigwam Motel #7 - his last. I've seen the date of construction listed as 1953 and 1949, as on the sign. When built, this patch of land was in San Bernardino, but at some point the border changed, at least according to the post office, which has it at 2728 W. Foothill Boulevard, Rialto, CA.

They are technically called teepees because they are conical, not round like a wigwam.

The slogan "Have you slept in a TeePee Lately?" is a recent replacement for...

...DO IT IN A TEE PEE. Yes, for a long time, this place was the red-headed stepchild of the other two Wigwam Motels that remain of the original seven. Enthusiasts of such novel lodging would say "There's one in Holbook and one in Cave City...oh, and maybe one more in California, but its sleazy." Redford died in 1958 and by the 1970's the motel was known for hourly rates. That began to change in 2002, when Jagedish and Ramila Patel bought the Wigwam for just under one million dollars and, along with their son Manoj, fixed up both the motel and its image. I'm glad they left this old sign attached to a shed behind the dwellings; it was a nice nod to history.

I understand the transformation has been dramatic. The place is now clean and well cared for. In a classic case of the benefits of researching travel on the internet as well as in the bookstore, many of the Route 66 books have not caught up to this change, but it is well covered in websites.

We actually arrived after dark; just like owners at the two other Wigwam Motels, this one was nice about staying later to check us in on a night they were fully booked. I didn't walk around shooting a lot of pictures; although the place seemed pretty safe, there was a lot of activity - groups of young men coming and going - and a woman in a nearby teepee told me her's had been broken into. I'm not sure I believe her; when I suggested she call the police she became reticent. That being said, I think this place was at the nicer end of the dicey spectrum for mid-price motels in the Rialto/San Bernardino area. 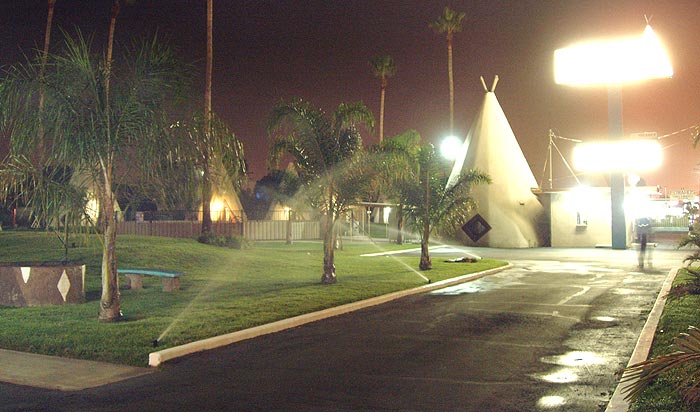 The units lack lights atop the teepees like they have in Holbrook, or the central fluorescent yardlights, as in Cave City, but they have nice lamp posts. 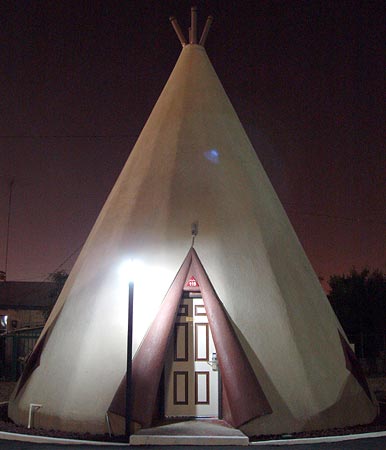 How fitting that on our first morning in California we'd have a palm tree shadow on our tee pee. 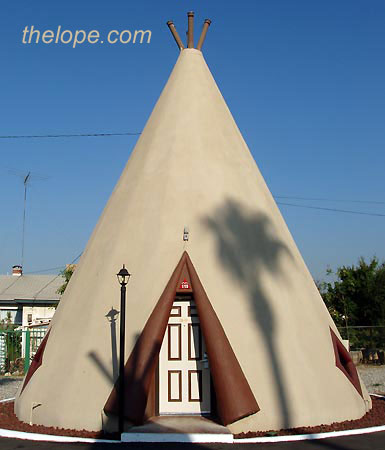 The furnishings here stood in stark contrast to those in Holbrook, and Cave City. This was all new decor, whereas those had been composed largely of original furniture that looked more "woody." Given the previous reputation of the place, I wouldn't be surprised to learn that the original furniture was trashed long ago. 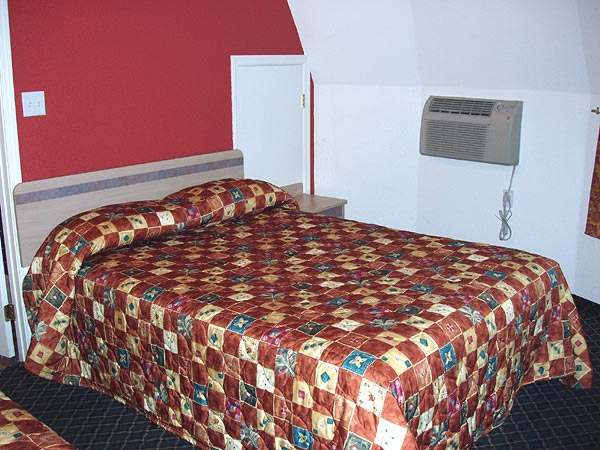 There was a phone here, like in Holbrook and unlike Cave City. 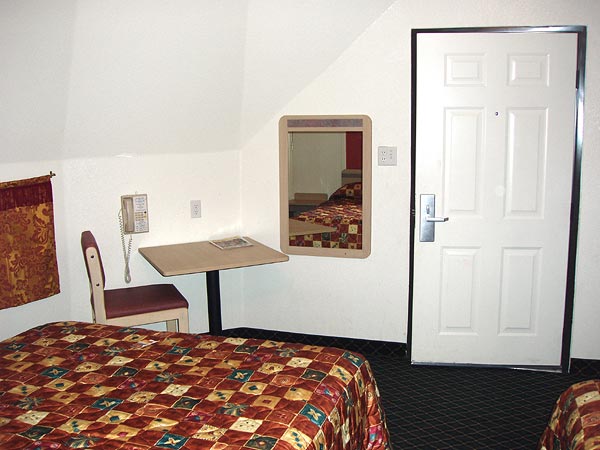 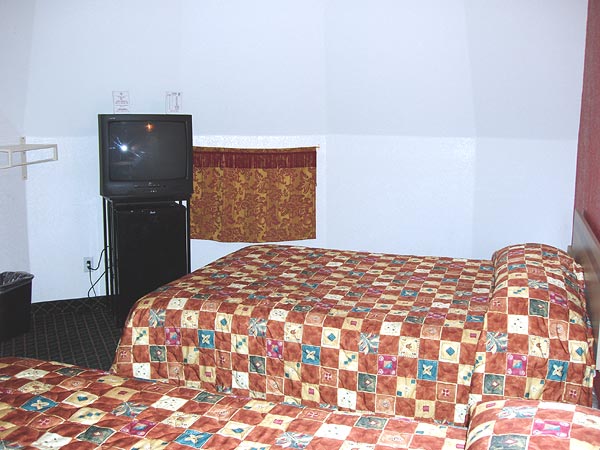 Bathrooms at all three Wigwam Motels have showers, but not tubs. 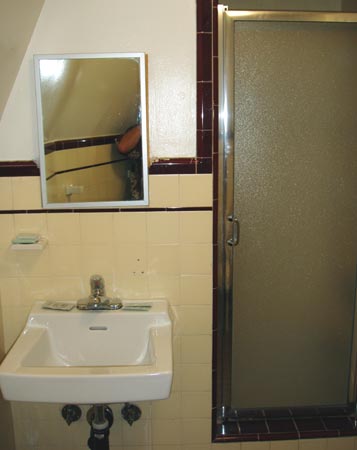 Wouldn't it be cool if, at some motel or another, there were marks on the wall that allowed the light coming through the peephole to be like a solar calendar? 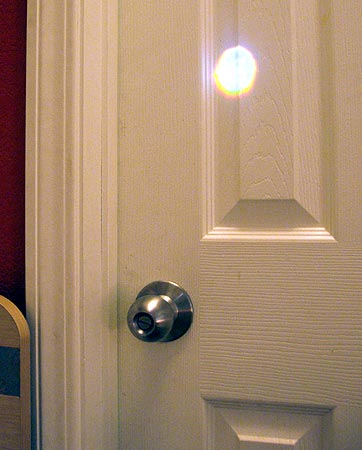 This was our first view of smog - not something we are used to seeing along Route 66. 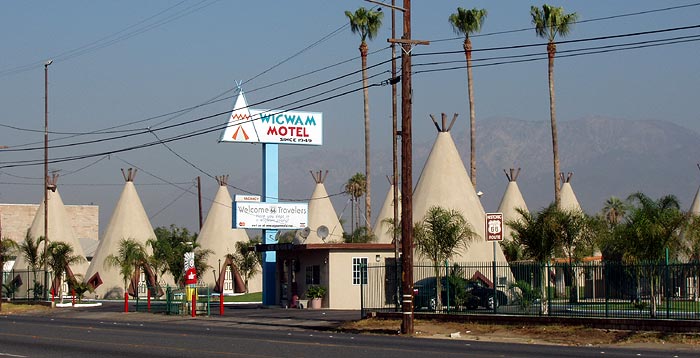 The office of this Wigwam Motel is a fairly "normal" sized teepee, unlike Cave City, which has a huge one, or Holbrook, which tore down the original office/teepee and replaced it with a rectangular building. In the distance, down Foothill Drive (Rte 66 in Rialto) you can see the bowling sign I wrote about in the last Route 66 entry. 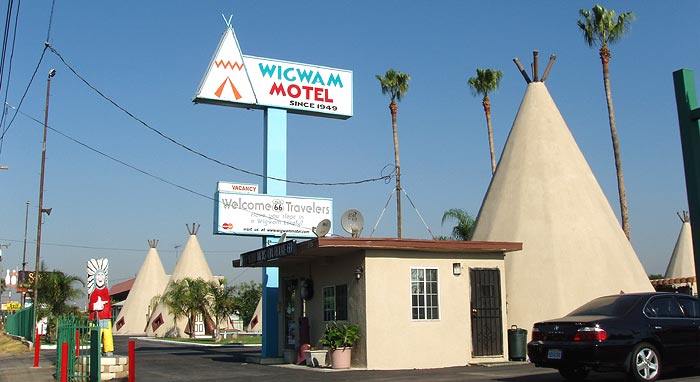 The owners have some decent RT66 decor in the office, but no place-specific souvenirs for sale unless you count a postcard of the place by artist R. Waldmire that is also sold at other Rt66 businesses. 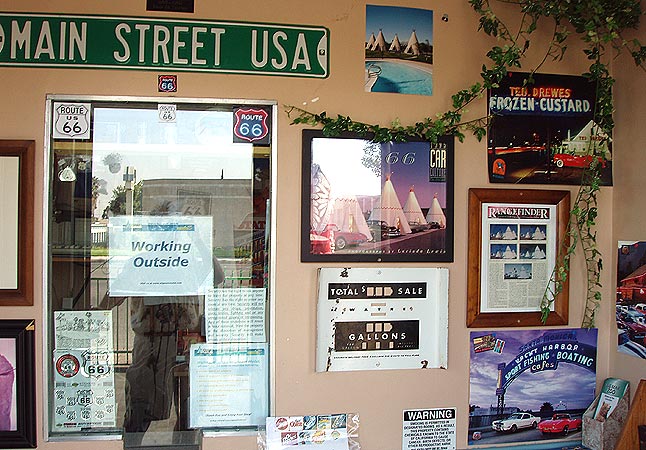 Unlike the other Wigwam Motels, this one has a pool. 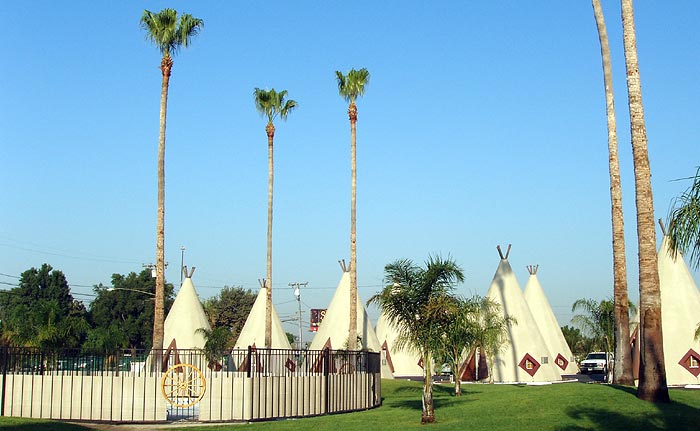 And the pool is kidney-shaped, no less. 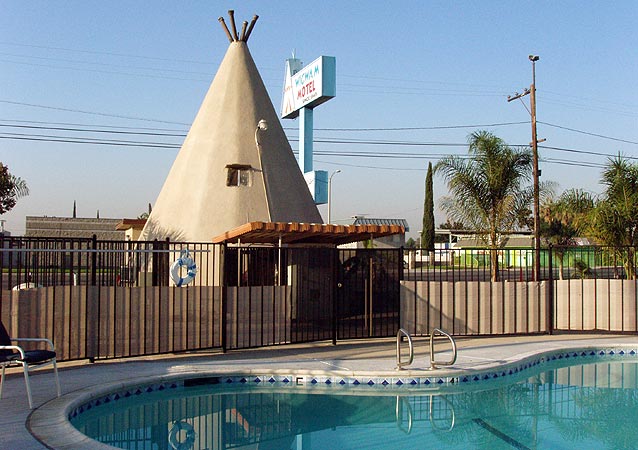 There's at least one outdoor grill. 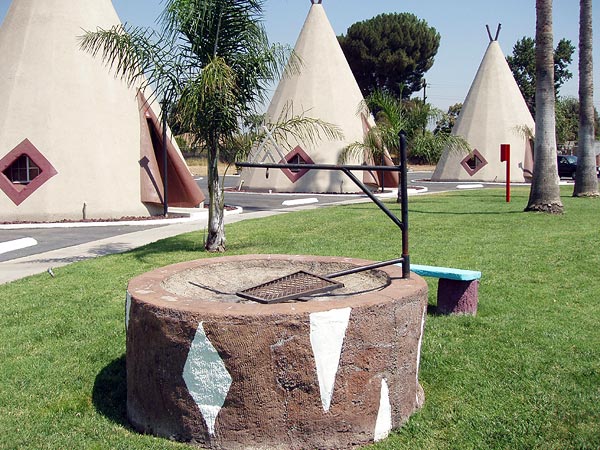 And they bothered to make a bit of its decor thematic. 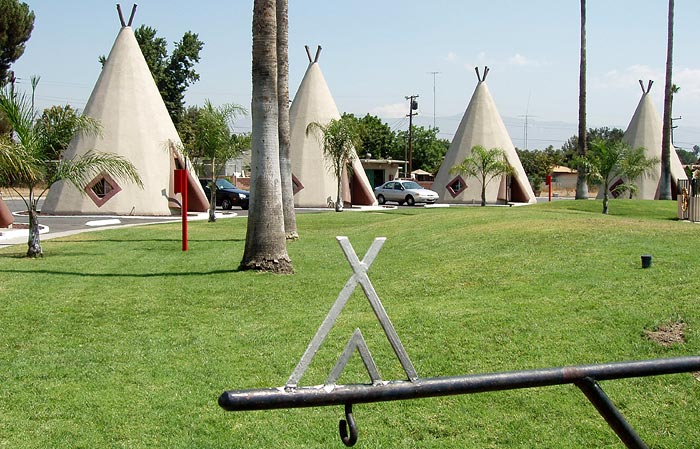 I'm not sure how old the Indian is...probably not original, I would guess. 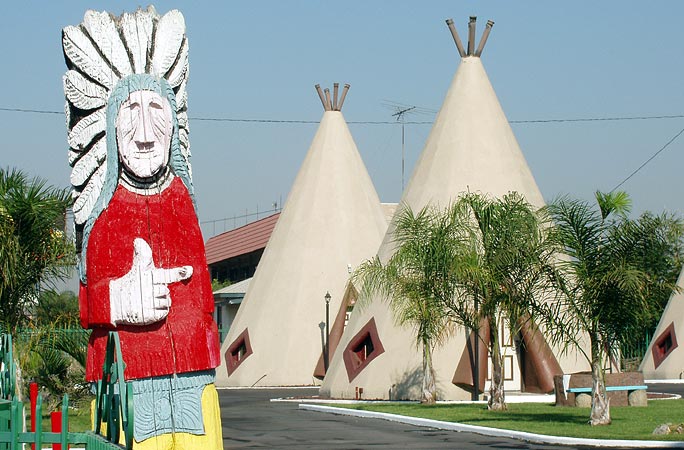 Unlike Cave City, which has a single huge half-circle of teepees, and Holbrook, which has a them arranged on three sides of a lot, the nineteen teepee dwellings here are in one semi-circle and two partial outer ones, flanking the inner one. I suppose this was a more economical usage of the land, one way in which this site is more urban than the other two. 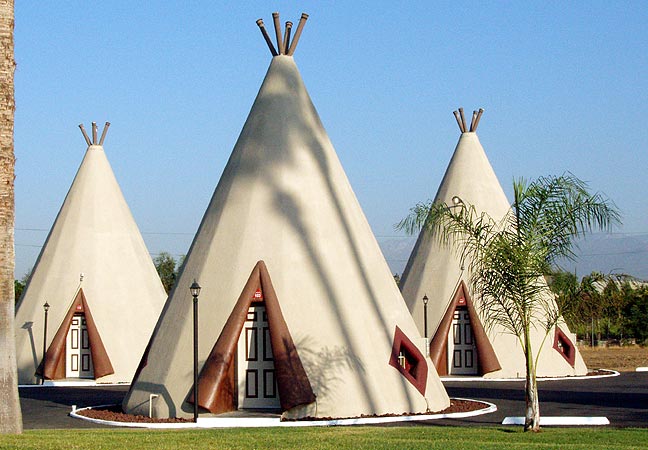 This offered some nice views. 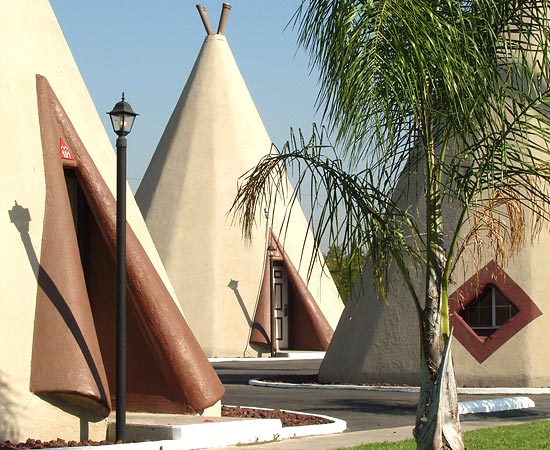 The inner ring of teepees faces a well-manicured grass lawn. 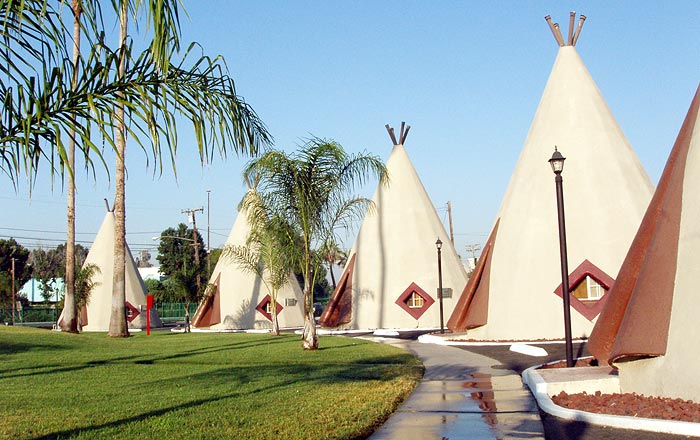 The outer teepees face the common asphalt driveway that allows one parking space beside each teepee. It also faces the backs of the inner ring. I'd consider the inner ring more desirable...less noise, better view. 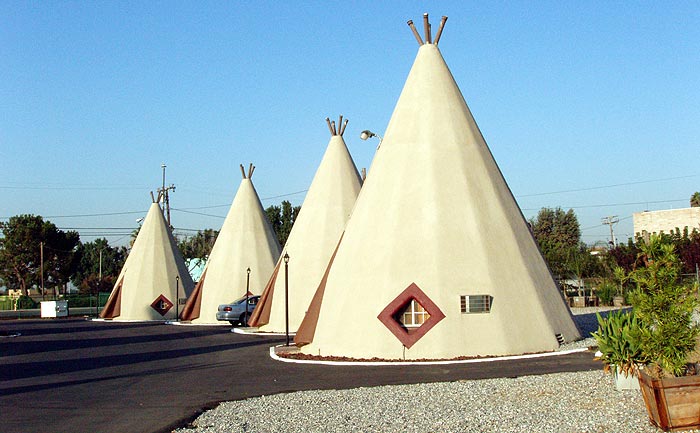 Its difficult to explain the appeal of a Wigwam Motel, except to say that they are simply fun. Quoth one of my travel companions: "Anytime you CAN sleep in a wigwam, you should."

I think we've found our lodging for any future trips out this way. 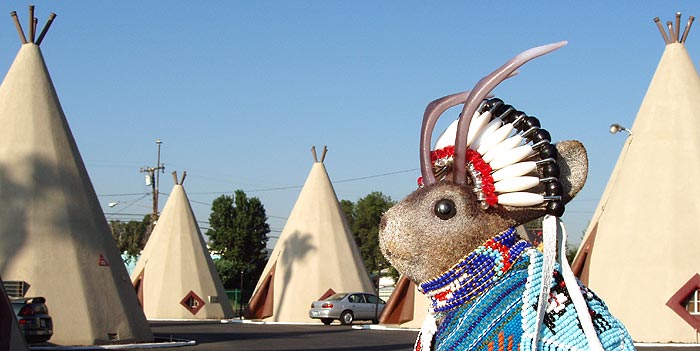 Next Route 66 post: Neon Jewels in the LA Suburban Sprawl 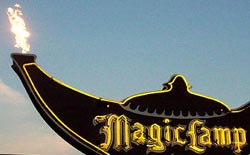 posted by Ace Jackalope at 3:00 AM