It's hard to top Christmas on steroids. If you can do one Christmas thing in Carthage this year, pick "The Way of Salvation" drive-through extravaganza at the Congregation of the Mother of the Redeemer, better known by it's former name of the Congregation of The Mother Co-Redemtrix, a Vietnamese seminary at 1900 South Grand.

The Way of Salvation is open Thursday-Sunday, 6-10 p.m. through December 24 this year. The attraction is free with a donation booth at the end. They are really serious about that 10 p.m. closing time too. Many's the time I've been taking photos there at closing as one circuit after another darkens. I'd swear you can actually feel your retina sighing with relief, though your brain wants more. The nativity is the most variable part of the display, though 2017's version looks much like last year's but with the addition of deer that remind one of a Patronus in a Harry Potter book. Otherwise, the concentric, brightly colored 1970s-like stars that have led some visitors to nickname this version "Disco Jesus" are carried over from last year. Electric fire logs are piled near the crib. 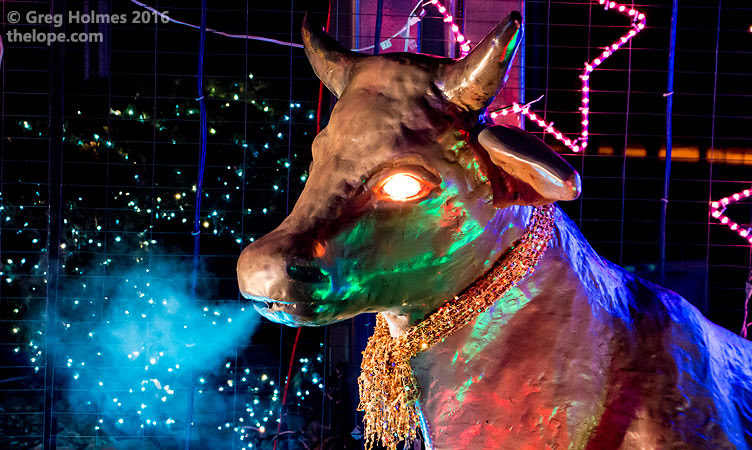 Just as last year, a donkey and bull exhale smoke from a hidden fog machine. They are best seen in this view from 2016. Last year I noticed that although the rest of the display closed as scheduled on Dec 25, the nativity portion was still lit as of Dec 30. They aren't the only creatures with light bulb eyes. A statue of a turtle symbolizing peace supports a giant incense burner symbolizing prayer. 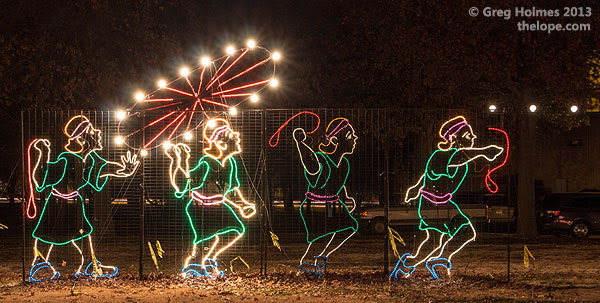 Most of the display is Bible-based, such as this animation of David using his sling. This is a time exposure; you'd see only one David at a time. Amidst the biblical stories are the occasional bits of whimsy, such as the one we call Hula Dog. This display illustrated the gradual switch from incandescent to LED lighting, ongoing these last few years. 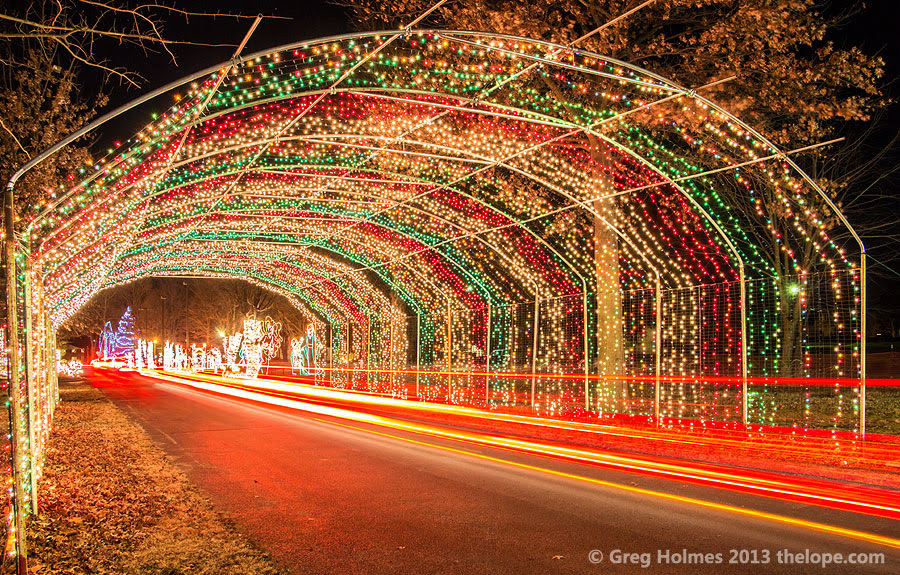 The light tunnel flashes with a number of variable effects. 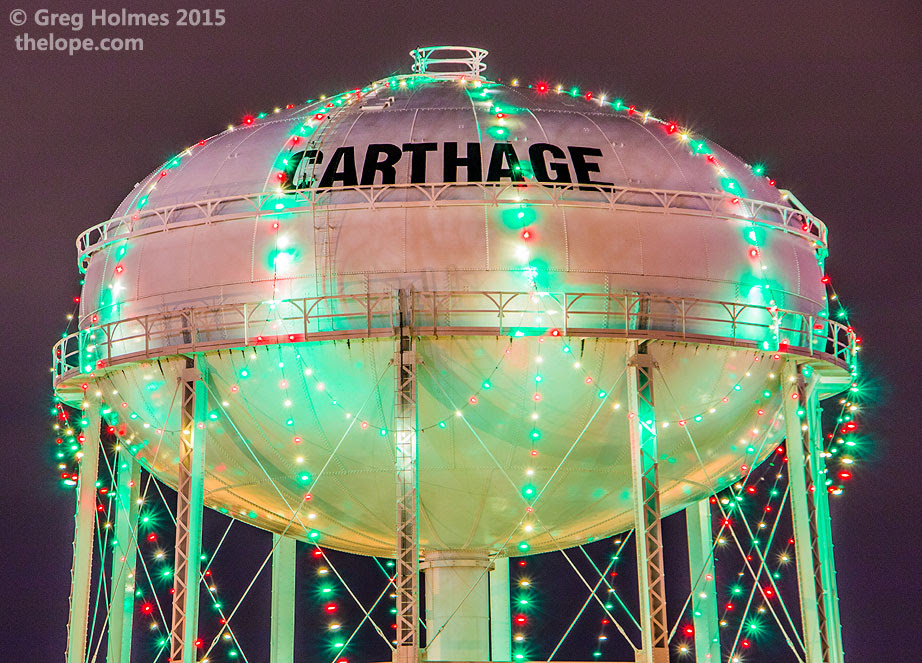 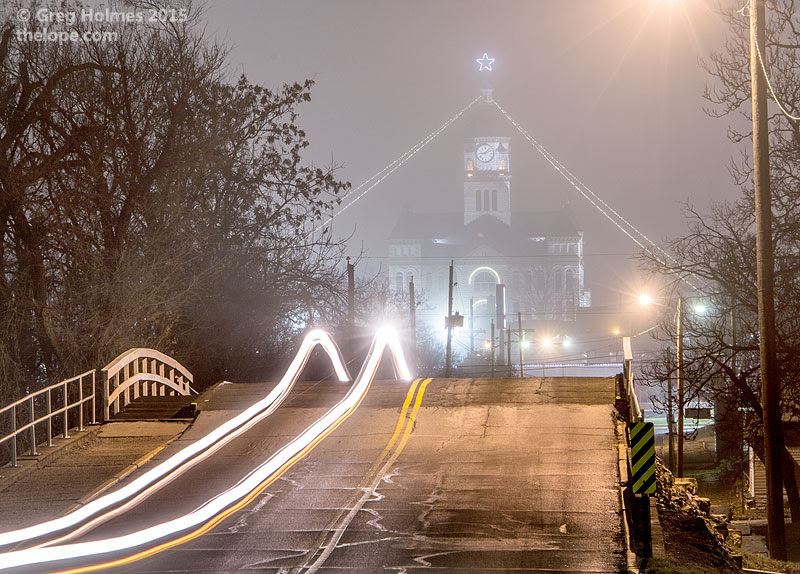 In 2017, as is many previous years, the Jasper County Courthouse is joined to the four corners of the town square with very long strands of  Christmas lights. It is seen here on a foggy night in 2015 from the Oak Street bridge on Route 66, also known as "Tickle Tummy Hill" and the "Whee Bridge" due to the sensations cause by driving over the bridge at significant speed. 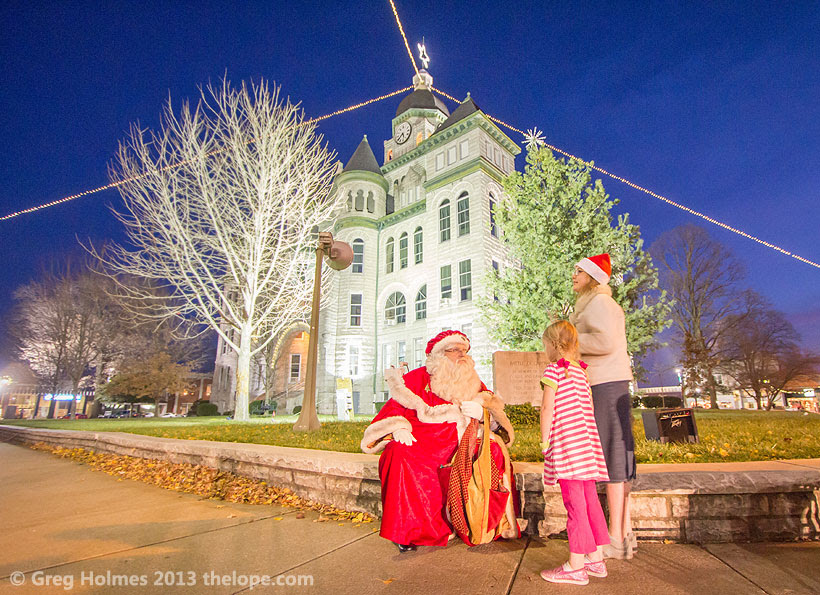 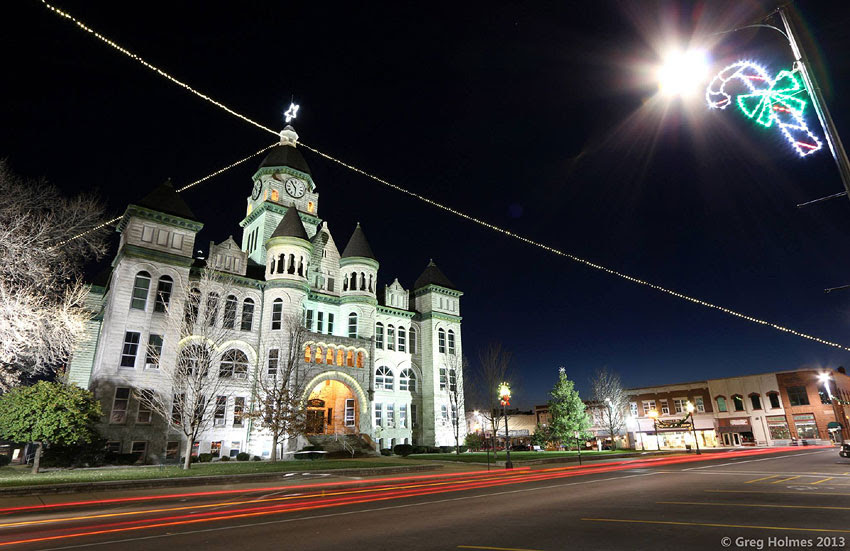 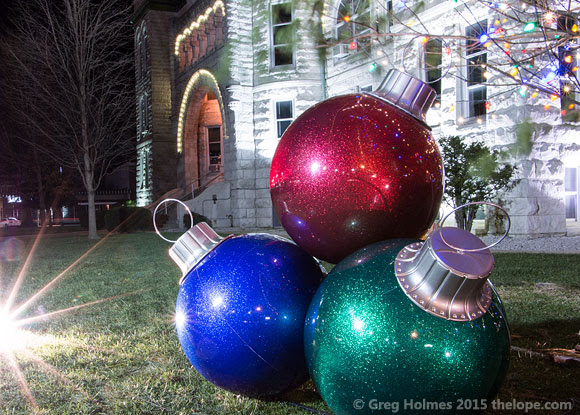 Back for 2017 are the giant ornaments on the lawn. Just south of the courthouse (background) is a rather nice nativity at the First Presbyterian Church, 115 W Chestnut St. 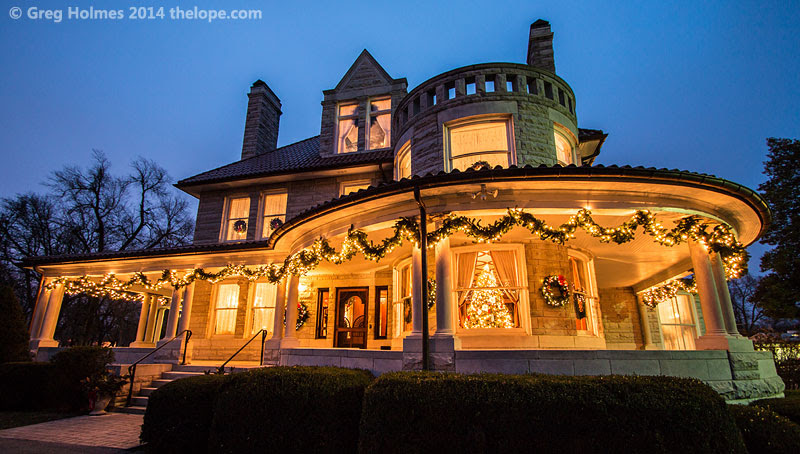 Many of the historic homes along South Grand and South Main streets are decorated, such as the Phelps House at 1146 S Grand Avenue, seen here in 2014. It is decorated similarly in 2017. 1406 Maple has a computerized display again this year, just as in this picture from 2015. The tree syncs with music broadcast at 106.1 FM. The whale sculpture with antlers and a red nose at 1314 S Garrison has company in 2017 in the form of a snowman.

M&M Wrecker at 4093 South Garrison has a big light frame wrecker and a laser projector.

Precious Moments, 4321 S Chapel Road, just SW of the city, gets a lot of publicity but the building closes at 5:30 and the light display outside is modest for such a big deal attraction. They've used this light frame nativity the past few years.

"Mt Moriah Lights" is a computerized Christmas light display set to music that was started in 2010 as a high school gifted project. It is at the Mt Moriah Methodist Church, 15506 Nutmeg Road, ten minutes north of Carthage. The free light show is open this year through Dec 31, excluding Christmas, from 5:30 to 9:30 p.m. For more information see their website.