This is an evolving post; I will add photos as people put up decorations, which can be as late right before Christmas. 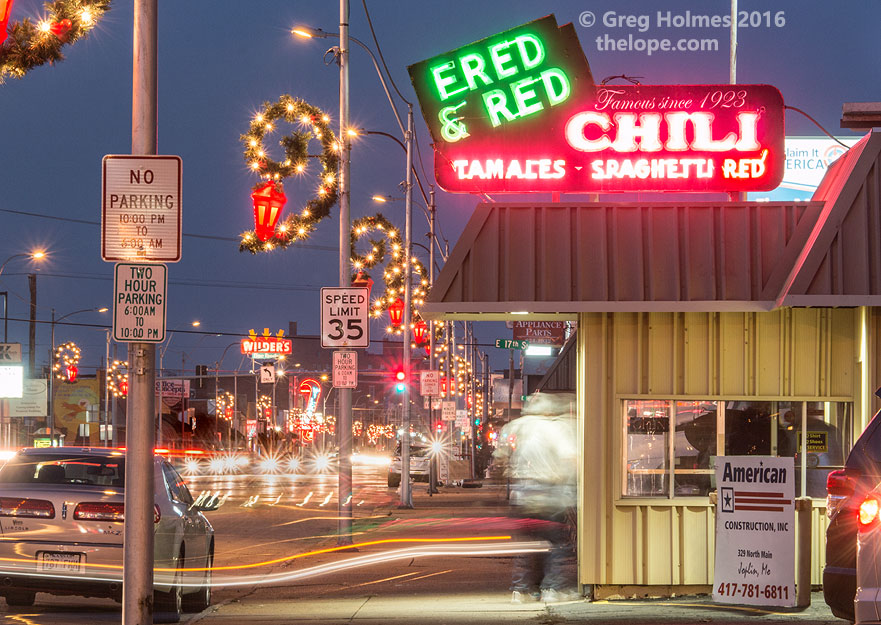 The most dominant features of Main Street are the plastic lanterns that adorn light poles from 8th to 20th streets. This also contains the city's best neon signs, from the newly-reopened Fred and Red at 1719 South Main Street... 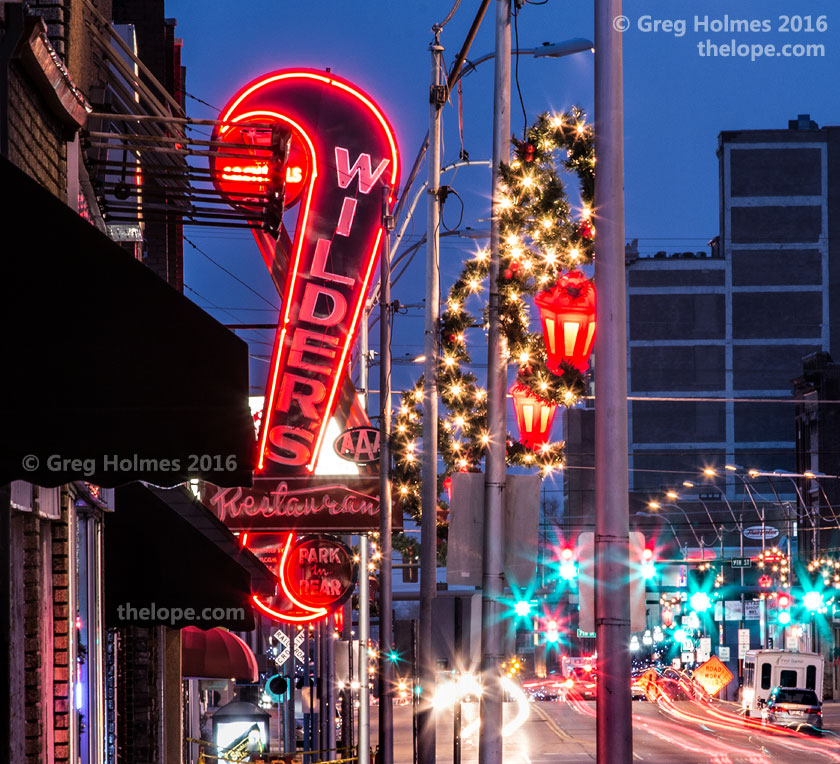 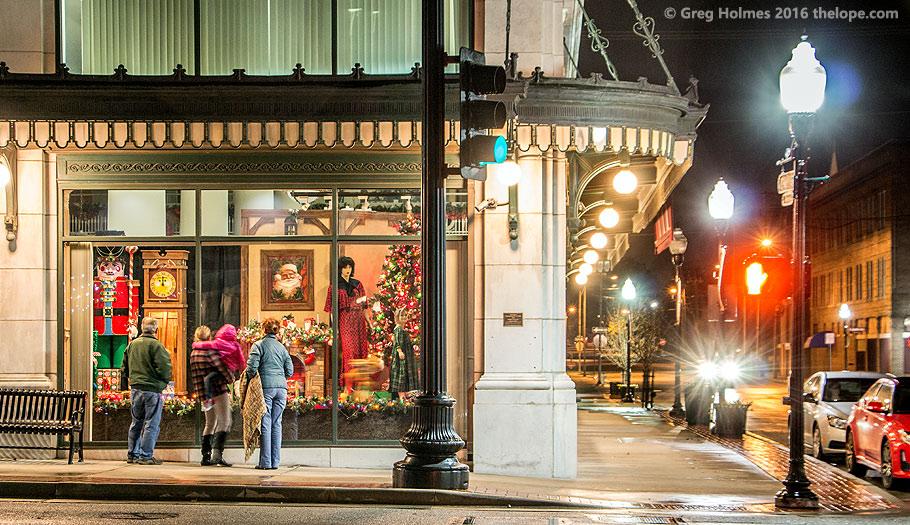 Since 2006, the windows of Joplin's City Hall, 602 S Main,  have been decorated in a style reminiscent of mid-20th century downtown department store Christmas displays, which is fitting as the city hall is in the former Newman's Department store, built in 1910.

This year's unveiling of the Christmas Window display was held November 28, 2016. The theme this time is snowmen, as in this collection of various blow molds. I've been shooting pictures and video of the windows every year since it started. Here's 2007, 2009, 2011 and 2012, when the theme was Route 66 ( Facebook album, video) 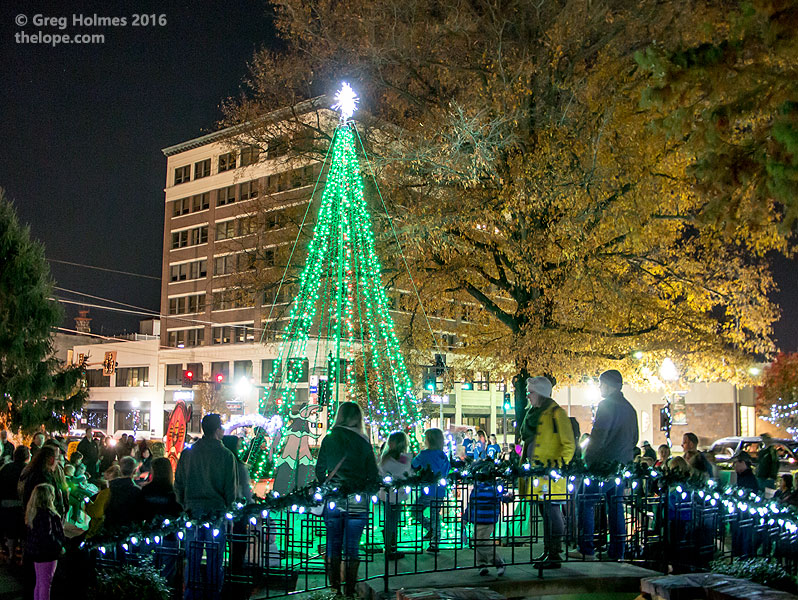 New for 2016 is s a big improvement in the Christmas display at Spiva Park on the NE corner of 4th and S. Main. There's a light show centered around a tall pole tree. The tree operates from 5:30 until 11 p.m. This was shot at the unveiling on November 28. 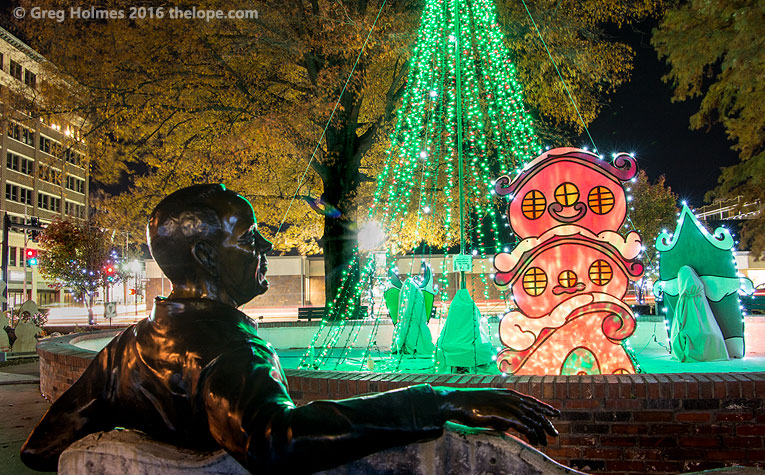 A statue of art and education patron George Spiva (1904-1967) appears to regard part of his legacy. The Whoville-ish panels cleverly conceal the bagged cherubs that are part of the fountain in which the display sets. 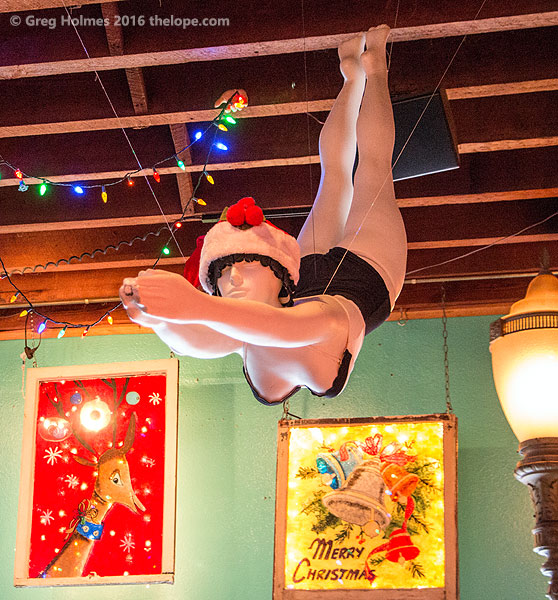 Club 609, a restaurant and bar at 609 South Main, owns a sleigh and reindeer that were once at the Dan Stanley Ford dealership. This year they are not displaying them but do have out a few vintage decorations and some whimsical Christmas-themed art. 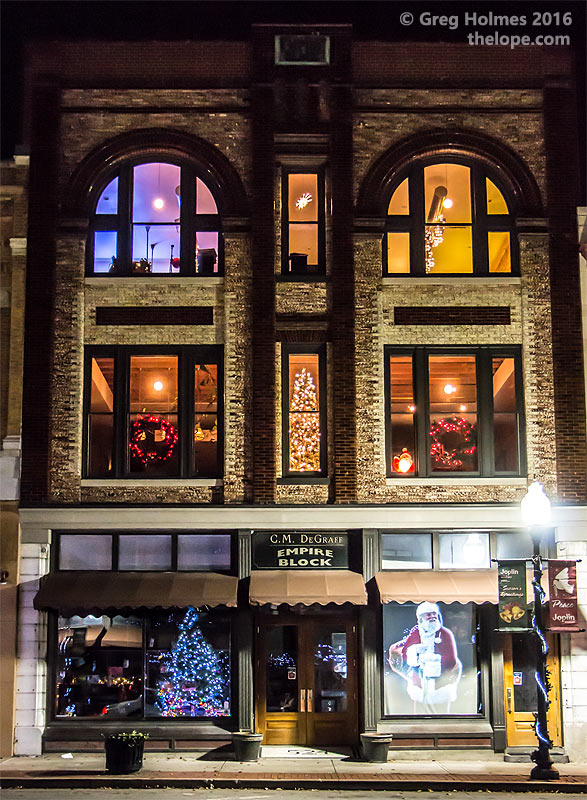 The Empire Block at 524 S Main features a video Santa in the window. 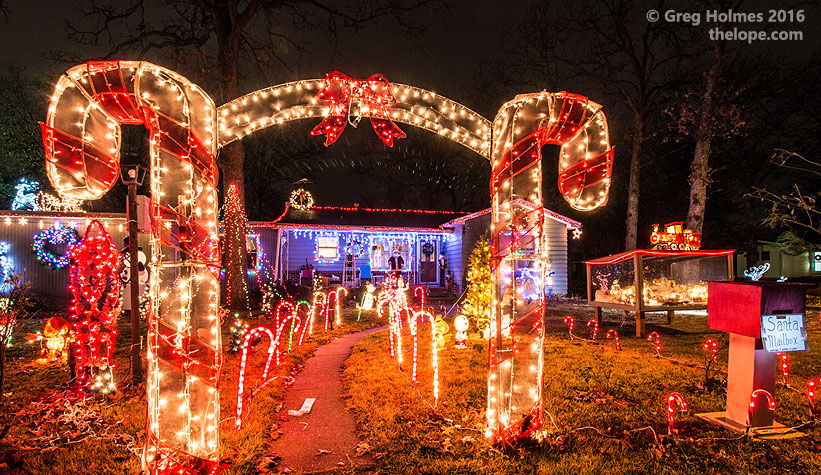 A home at 2420 N Independence Ave in the Royal Heights area of Joplin has a model railroad in a display case and a box where you can leave letters for Santa. A sign says they'll be answered if an address is included. 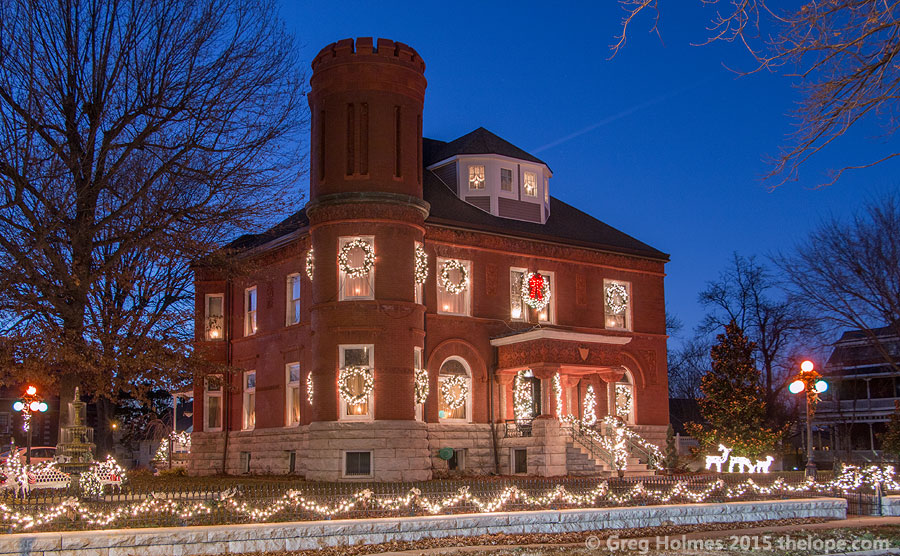 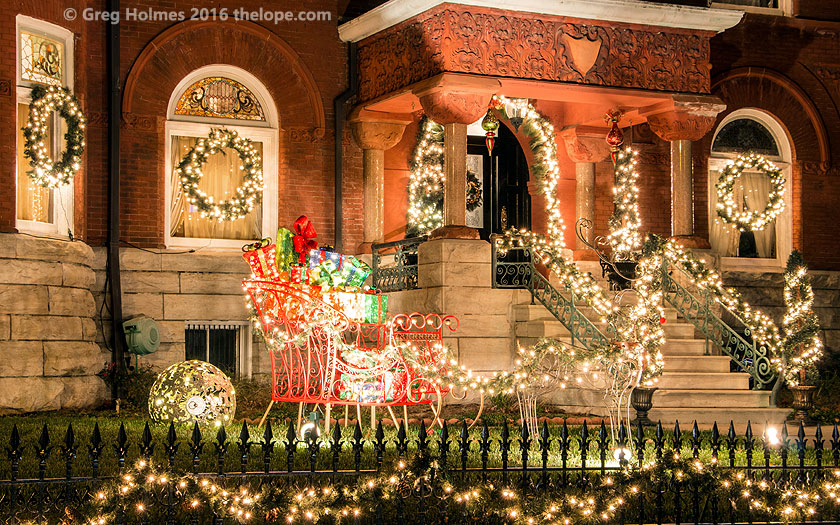 This year a sleigh has been added. 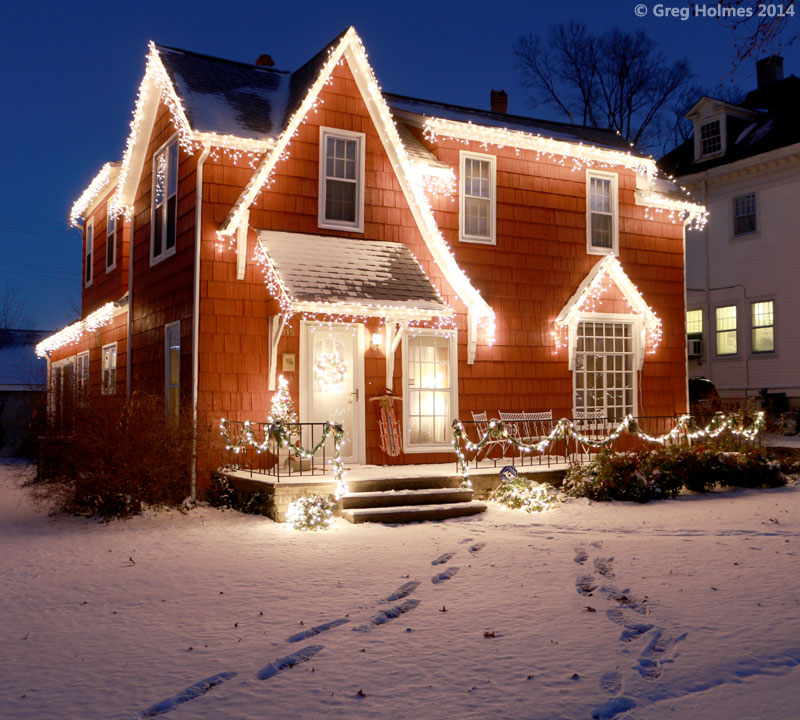 This picturesque house at 315 S. Sergeant looked great in the early 2014 snow and is decorated the same way for 2016. The district decided not to hold DickensFest this year due largely to a shortage of volunteers but plans a biennial homes tour starting in 2017 that will alternate years with the homes tour in Carthage. 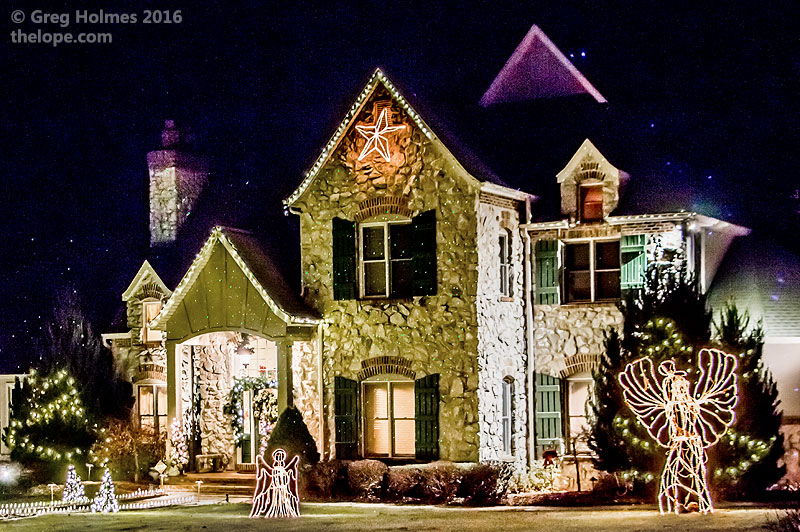 Oak Pointe is a housing development, the entrance to which is at N. Jackson Ave and West 42nd St, north of Freeman Hospital. Although new-ish and not historic, many of the homes put up nice Christmas displays, like this one at 1202 Carrington Terrace with the huge angels and nice nativity. 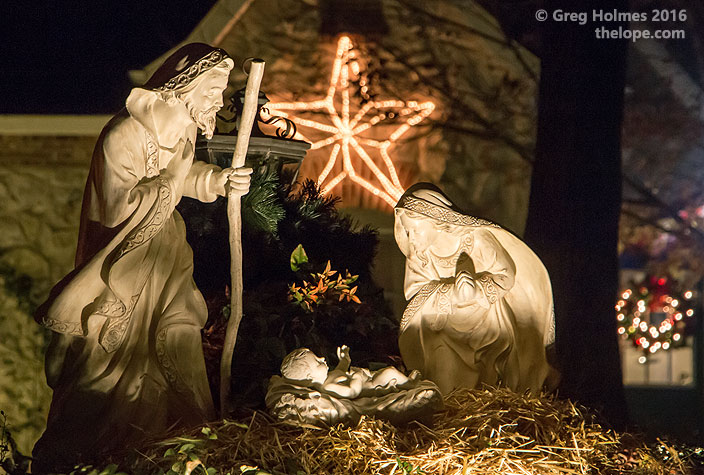 And here's that nativity. 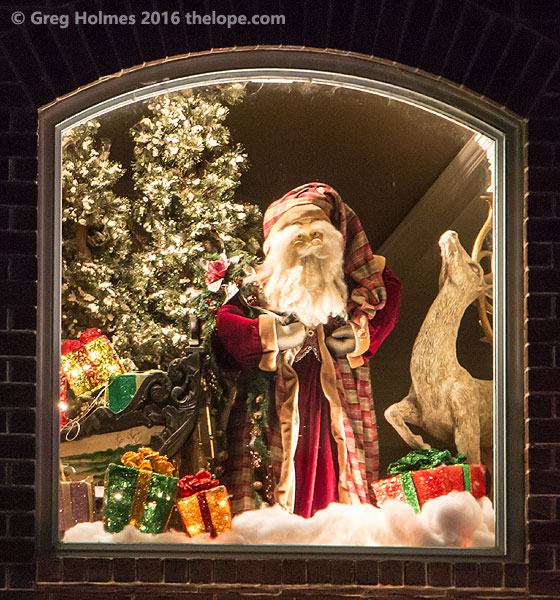 Santa gazes down of passers-by from a window at 1011 Carrington Terrace.

Last year, the lawn of Jack and Becky Walling, 612 Seville Circle Drive, was the star attraction of the neighborhood but it looks as if they may have carried through with their plan to move. 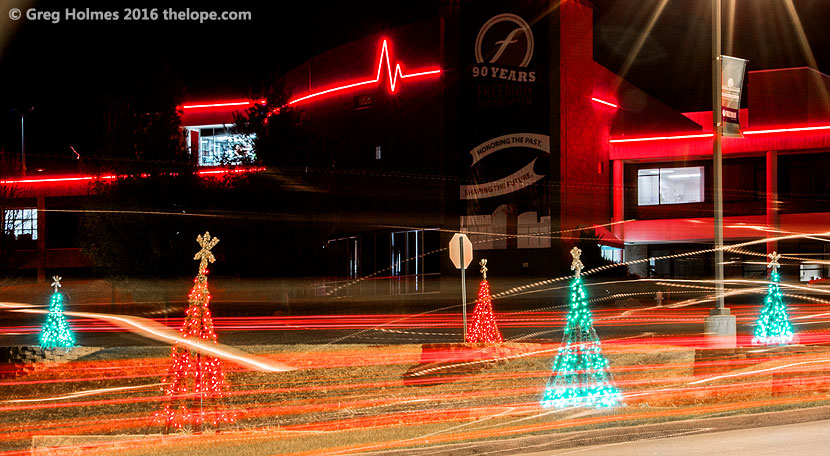 On your way to or from Oak Pointe, you could see the driveway of Freeman Hospital, which is lined with dozens of red and green trees. The streaks in between them in this picture are from passing cars in the time exposure. Here's another view.  There are more lights to the south of the main buildings. 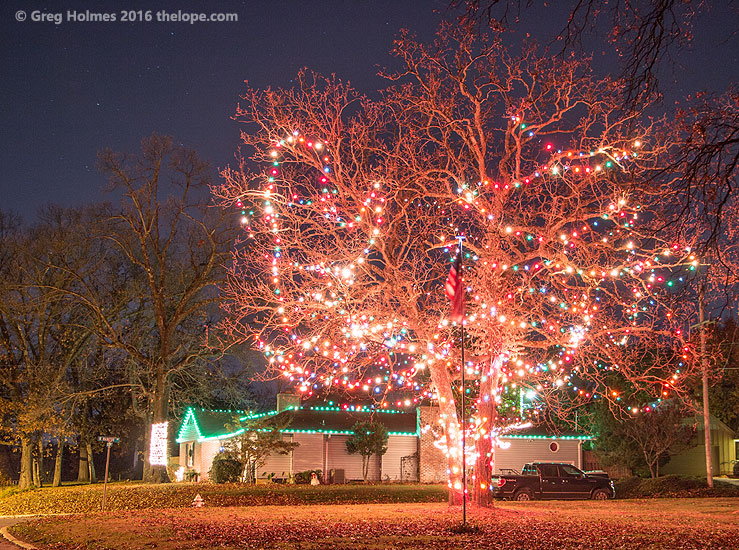 At the other end of Joplin is the Roanoke district where money tended to go in the middle of the 20th century, before being attracted to housing developments to the south. I never heard this name for it when I was growing up, as it was simply "North Town" or "Snob Hill." This oak tree in Crestwood Park was an ambitious decorating job. It's at the corner of Crestwood Drive and Manitou Road.

In the 1970s and 80s, many Roanoke homes used green C7 lights at Christmas. This uniformity is no longer the case and C7 bulbs are largely a thing of the past, but one can still find a few houses that are predominantly green. 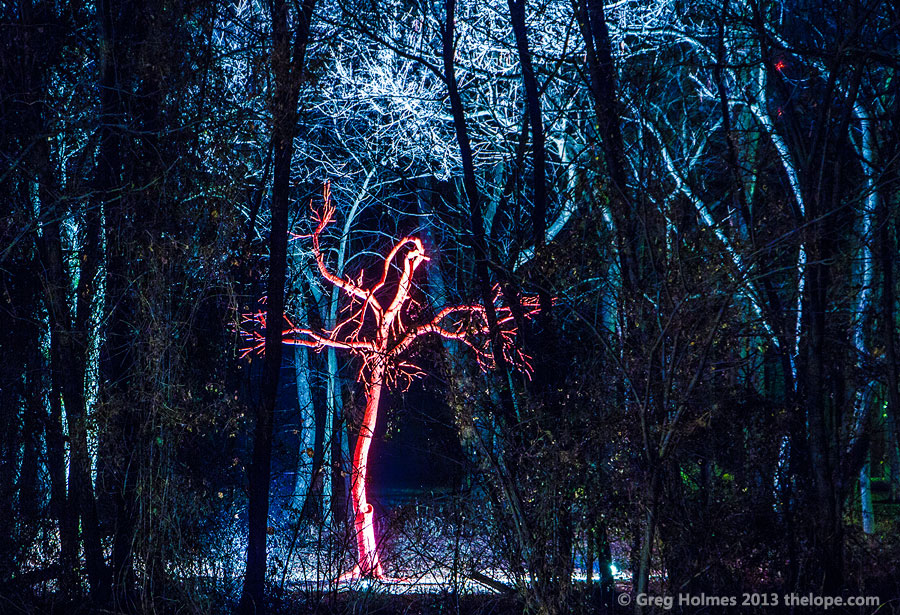 Just west of the intersection of NW Murphy Blvd and N Lone Elm Road, this starkly-lit  tree has been a feature the last few years. It always makes me think it's telling a story to the taller trees, like one of Tolkien's Ents. The house and expansive grounds near it feature a number of large stars though trees somewhat limit the view.

These are some of the more notable perennial displays. 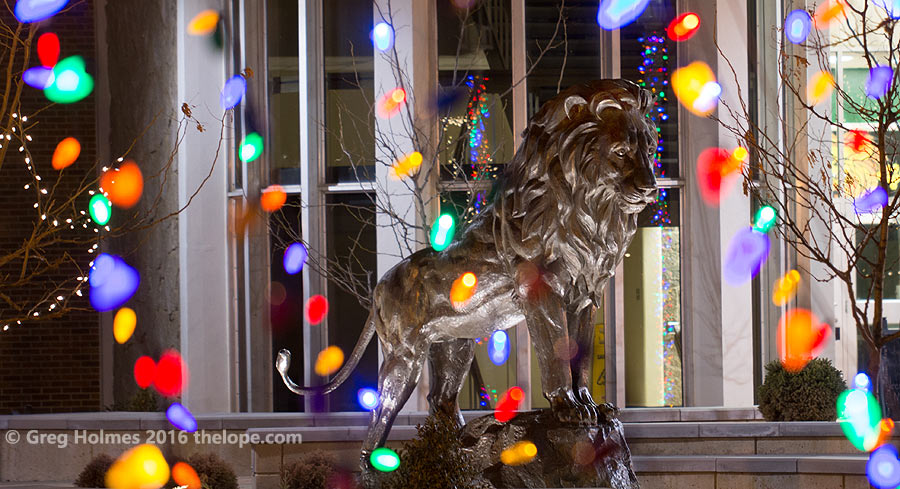 Missouri Southern State University has a pole tree. The lion statue in front of the student union can be seen through it. 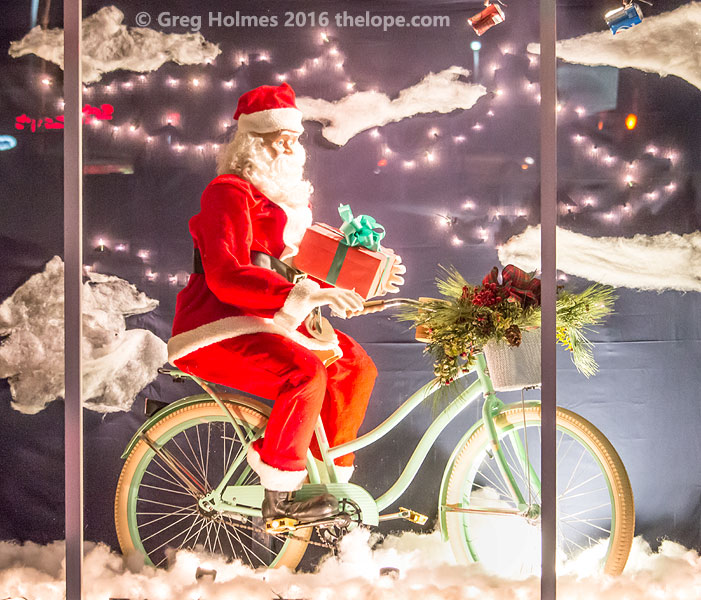 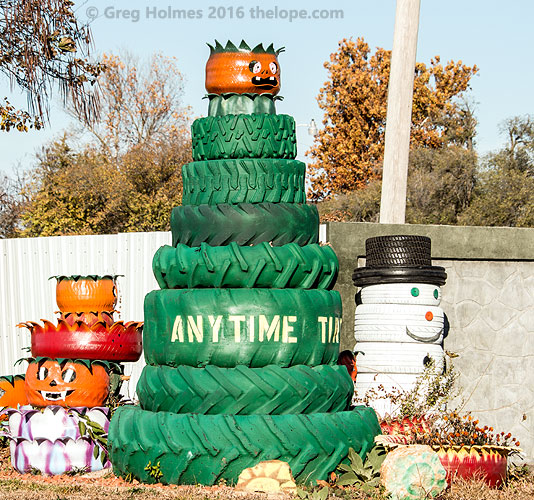 A tree and snowman made of tires regard motorists at Anytime Tire and 24-Hour Road Service, 1131 West 4th Street. I first noticed these two years so it's a least a minor tradition. 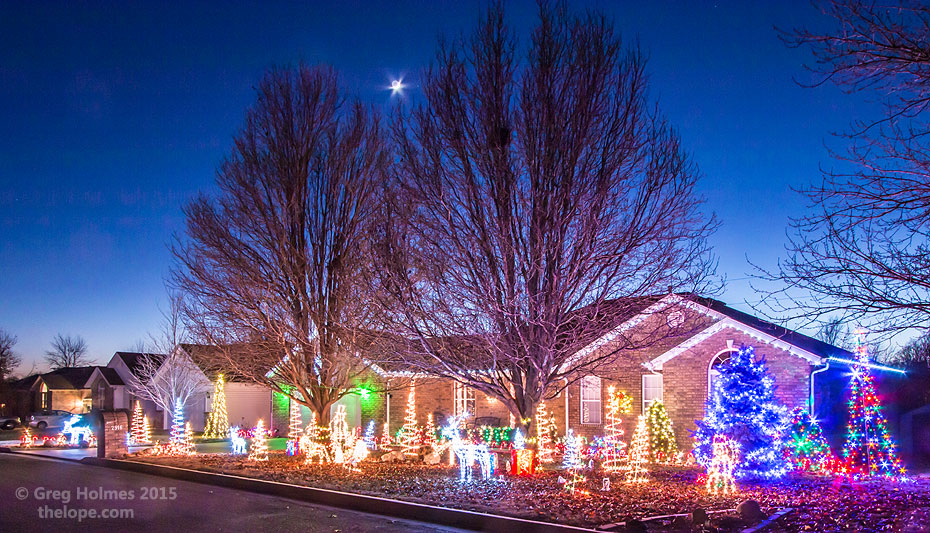 The crescent moon shines on 2916 South Patterson Ave. These folks have decorated in the same style for at least the past few years and do so early in the season. Their lawn has equal density for Halloween. This year they were up and running by Thanksgiving.

This dinosaur "Merry Christmasaurus" display is at 1728 South Kansas, on the corner of 18th and Kansas. I don't usually go in for nylon inflatables but this is a nice grouping. Hat tip to Leslie Breedlove for emailing to tell me about this last year. It's up again in 2016. 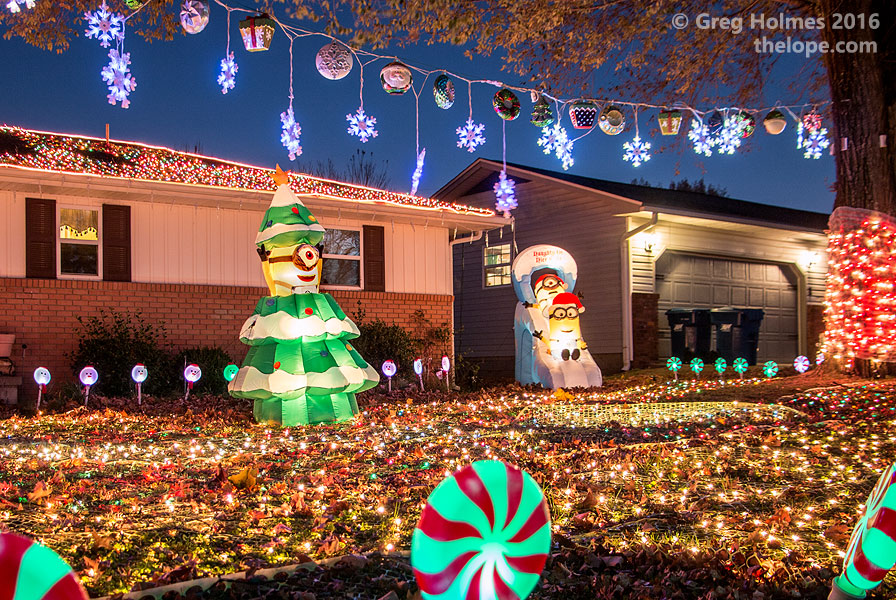 The folks at 2709 South Massachusetts have completely covered their front lawn and roof with lights the past few years. This year they added Minions.


The Petro truck stop has a huge display of music-synced truck tail lights, just as they have the past few years. 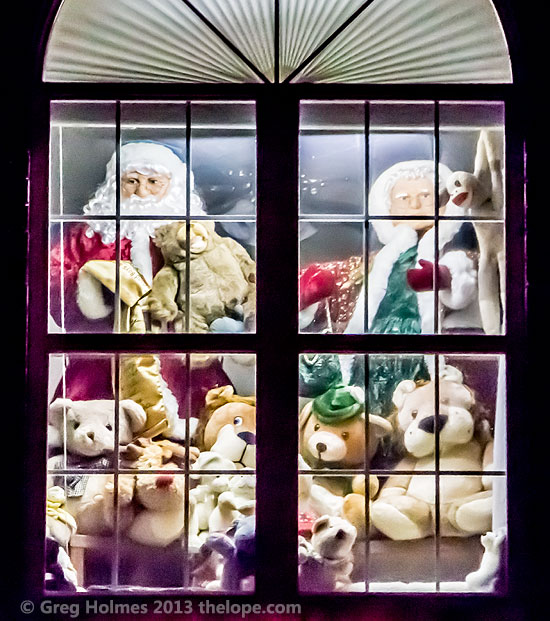 Santa and Mrs. Claus with an entourage of stuffed animals observe you from 3431 South Brownell.

Lou and Jo Ann Molinar, 2623 South Shifferdecker, have displayed these pole trees every Christmas season for over 26 years and already have them going in 2016. Lou even put them up in the 2011 season when their house wasn't yet repaired from the EF5 tornado in May of that year. Each year since 2011 I've photographed the changes as new construction takes place. 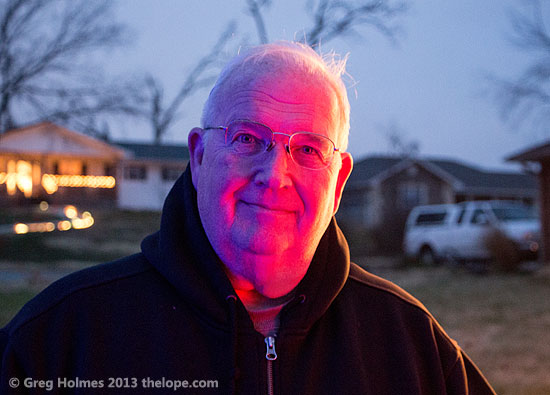 I spoke with the couple at length in 2013. Said Lou: "After the tornado hit, I can't tell you how many people came by 'cause we were about the only people who had lights. I decided I was gonna put it up if it killed me. I got it up there and it was absolutely worth it...some little kid said 'Oh Mommy. look at that' and I about melted right there." 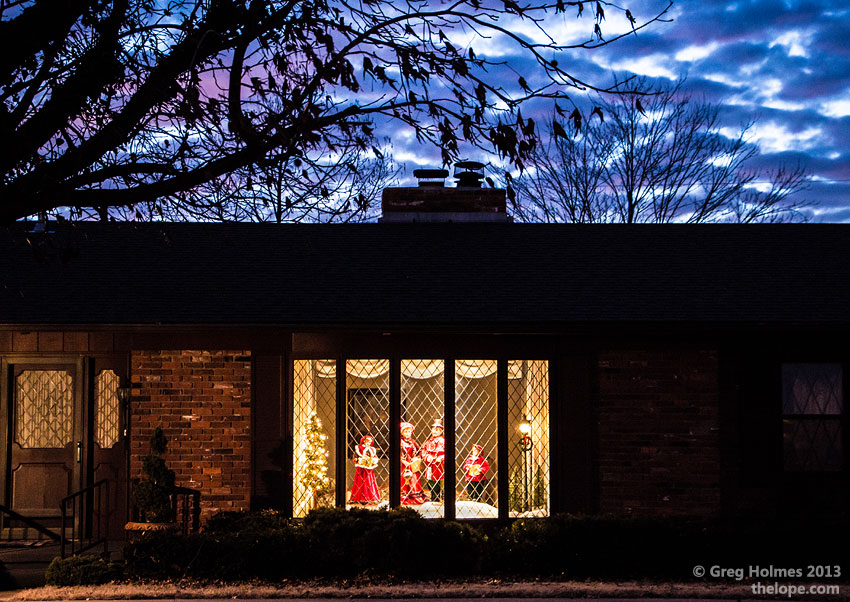 This house 2802 south Illinois, on the SW corner of 28th and Illinois, has featured carolers in the windows the past few years, just as it does this year.

This highly visible house at 3132 South Minnesota Ave. on the NW corner of Minnesota and 32nd St. has displayed an array of roof lights and a blow mold Santa on the chimney the last few years just as it does now. This year there are a few more decorations on the lawn. 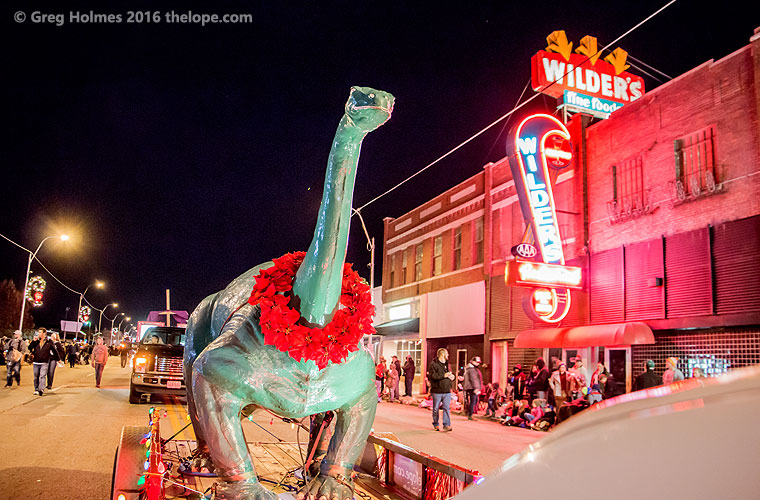 The 46th Annual Joplin Christmas Parade occurred Tuesday, December 6, 2016. It's a rather long nighttime parade with lots of lights. The sponsor was Freeman Hospital and the parade ran north on Main Street, starting at 15th Street and ending at 3rd Street. My own float in the parade was a former Sinclair dinosaur which friends and I named George Patrick MacGuffin. In keeping with the "Hollywood" theme of the parade, I made it a salute to the 1925 silent film, "The Lost World."

For a sense of the Joplin parade, here's the entire 2014 version.


Gone but not Forgotten

Ozark Christian Collage retired their Living Christmas Tree after 2015 due to aging frame and a smaller college choir.

Railroad Salvage and Restoration, 1710 S Joplin Ave, has decorated a large part of the block it occupied these last few years, though it did not do so in 2016.

The folks at 2216 South Florida had a tradition of putting up a pole tree but it wasn't present in 2016.

Last year, F&L Truck Trailer and Equipment, 803 Orr Ave had a Christmas tree held aloft by a huge piece of equipment but they don't seem to be doing that this year.


This is a personal video (Hi8) I took on Christmas Eve of 1991 as I came home to Joplin. It shows a number of long-gone sights including the Watts Paint and Tick-O-Time neon signs on Main, the discontinued Minnesota Ave. luminaria and St John's Hospital.

posted by Ace Jackalope at 2:08 PM