The most unique Christmas attraction In Webb City is the Polar Bear Express streetcar ride. Streetcar #60 is a remnant of the Southwest Missouri Electric Railway Company, which operated from 1889 to 1939 over 94 miles of track back in this region's mining days.

Number 60 now runs on tracks around the 144-acre King Jack Park. Above, the Polar Bear Express stops along its journey so passengers may experience a musical light show. 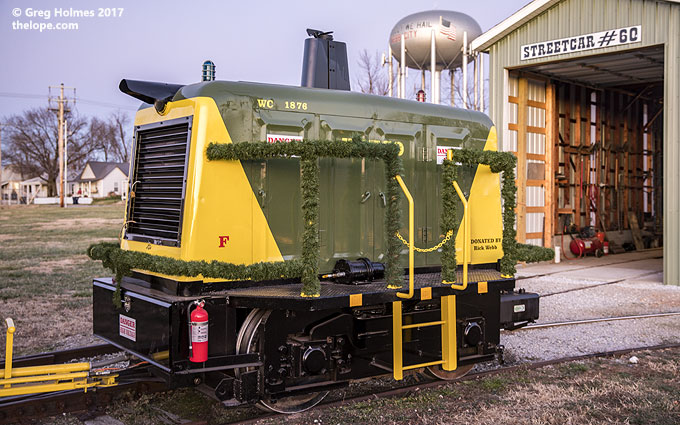 This year #60 needs a little help. Due to motor problems, it uses a pusher engine controlled from the cab. 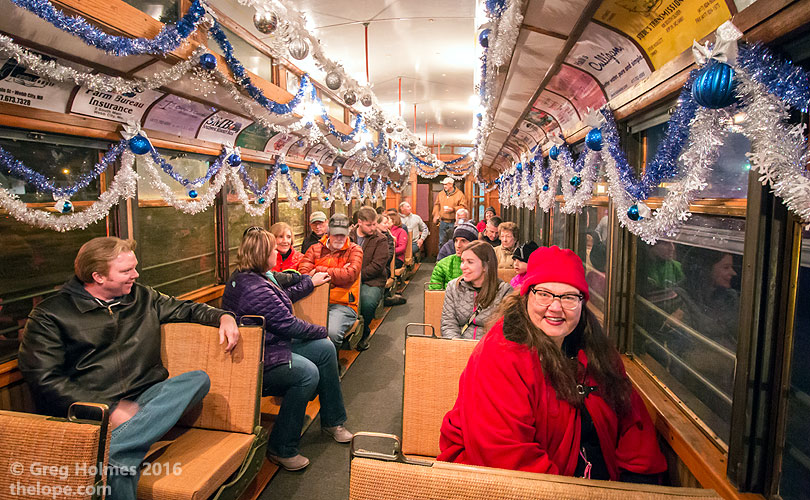 Passengers are treated to a story during the ride. Tickets were in demand and according to the official Facebook page, were sold out well before the last rides on  December 13, 14 and 15. Tickets were sold at Webb City's City Hall and were $1 for everyone over four years old; tickets for kids under 4 were free. (2016 photo) 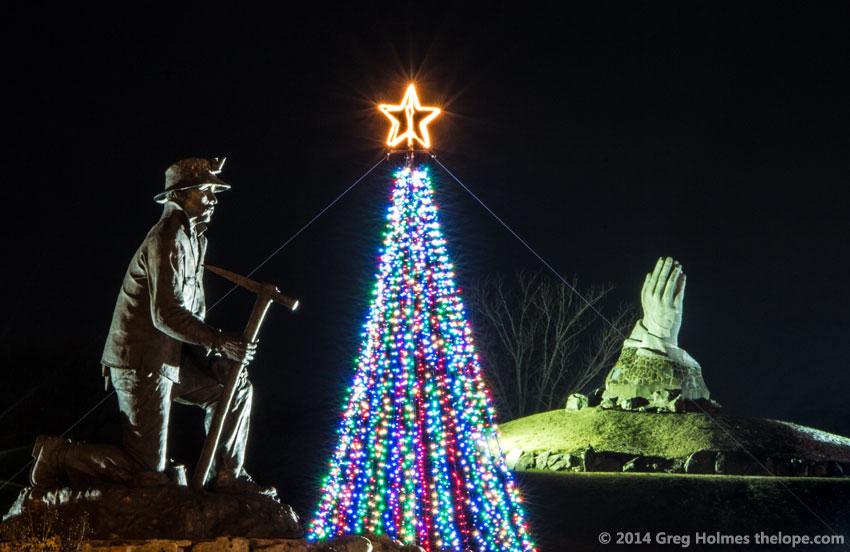 The park features a number of Christmas lights among permanent statuary. In 2017, some light frame animals were added near the Praying Hands statue. (2014 photo) 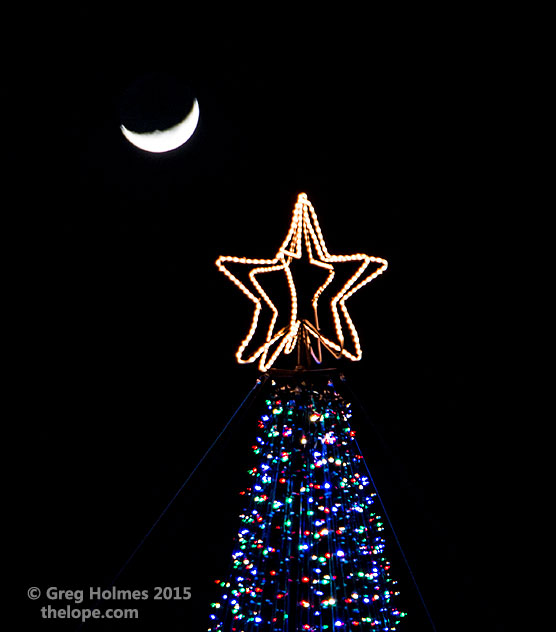 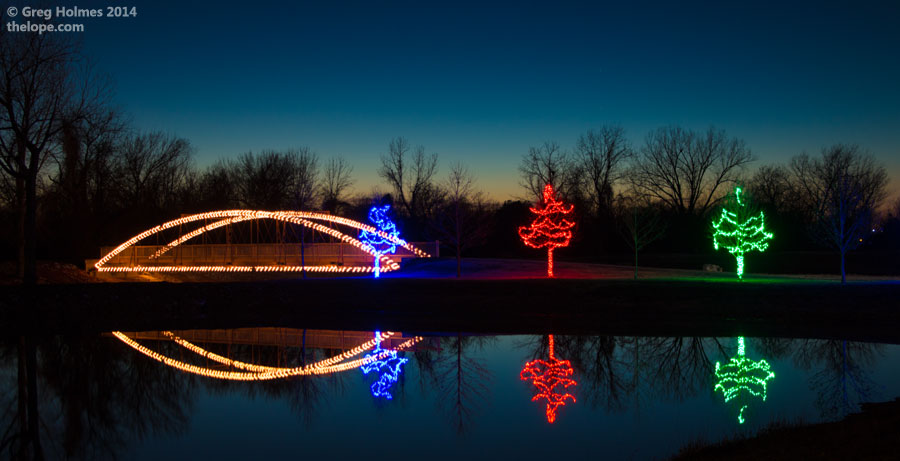 The metal walking bridge in the park is decked out in lights again, though the trees have grown since this 2014 photo. According to the Webb City website: "At one time the Georgia City Bridge was the oldest extant all-metal vehicular bridge in the state of Missouri. Built in 1871, it is a one span, bowstring arch truss bridge." 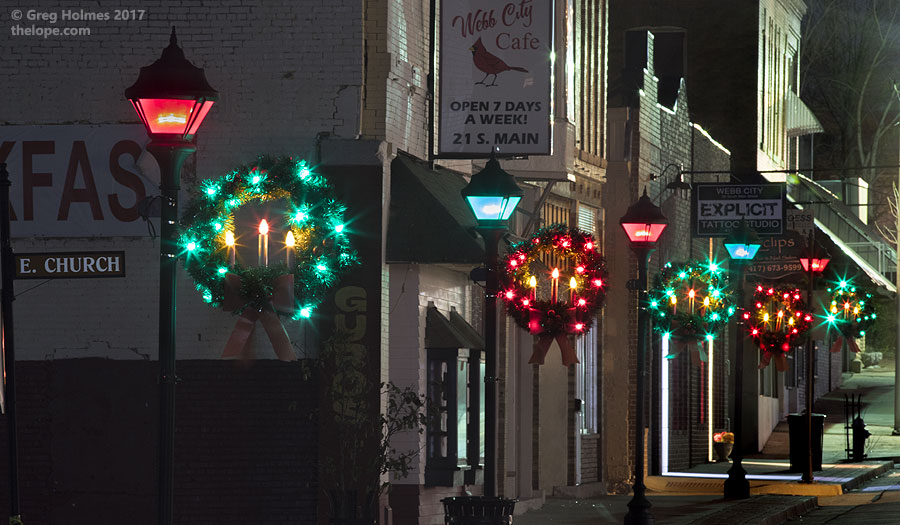 There's an improvement in the downtown Christmas lights this year. Alternating colors are used in the wreaths and street lights on a single pole, instead of the same color on each pole. In recent  years, the wreath lights and streetlight bulbs were the same color on each pole, with poles alternating in red and green. It's a subtle change, but sure makes a difference in pictures. Farther south, the same snowflake lights have adorned adorn poles for several years (video).

The Burpo chiropractic office at 26 South Main has features skeletons in the window display dressed for various holidays. This Christmas is no exception. Mrs. Claus is not left out.

Barely in Webb City and just across from the SW corner of the Joplin airport are two homes with novel decorations. This one at 25 Colonial Drive outlines its architecture and uses dripping lights in vertical windows and a Gemmy Industries life-size Santa. It looks exactly like this in 2017 but they've added a light-wrapped tree out by the street. 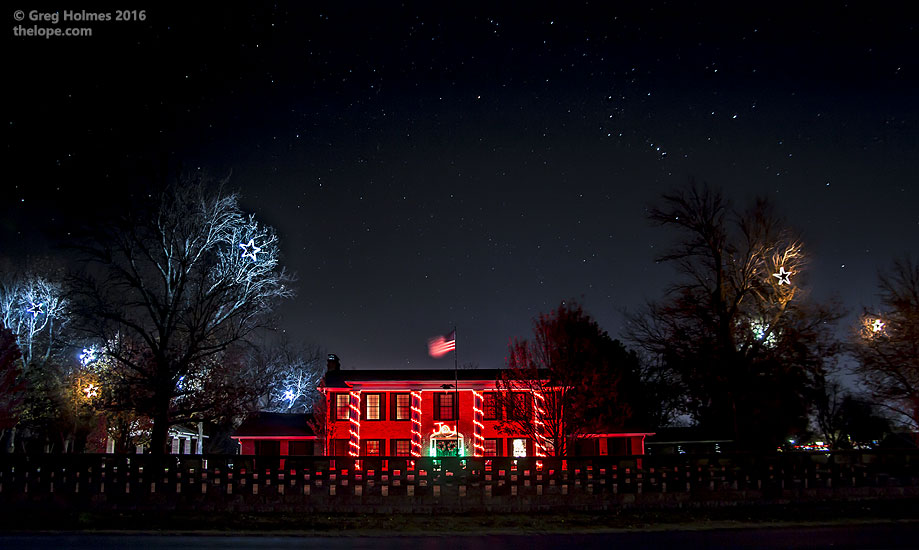 Just north of the above home on S Colonial Drive, the constellation of Orion rises above a house displaying "Joy" and several of their own stars. This is one of my area favorites as they often do something similar with the stars in trees. This was shot in 2016 and it looks just as cool in 2017.  Here's what they did in 2014.

Missing this year, as of December 10, anyway, are the Christmas light cardinals on a downtown building. The building is undergoing renovation so I presume that's the reason. The cardinal is the symbol of the local high school.

Some years, the  house on the SW corner of  W 3rd St. and S Webb Ave. displays huge decorations of the type one usually sees in municipal displays - not in 2016 or 2017 though, as of December 10.

Usually another noteworthy home is at 329 S. Oronogo on the NE corner of W. 4th and S. Oronogo. Last year the owner informed us that she'd had an injury and would not be putting out lights. We wish her well and thank her for some fun displays.

posted by Ace Jackalope at 5:44 AM