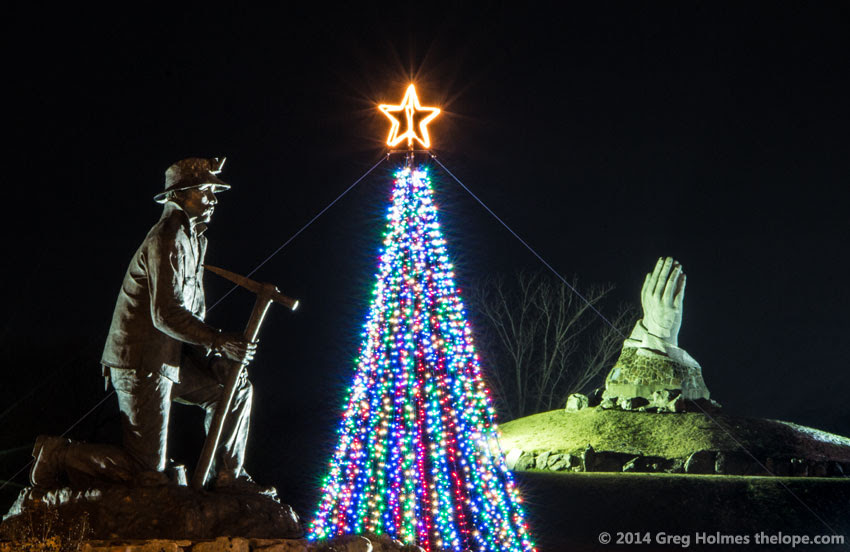 The big news this year is that Webb City's 144 acre King Jack Park is back in action as a drive through attraction after being unavailable in 2015 due to work being done on the park. 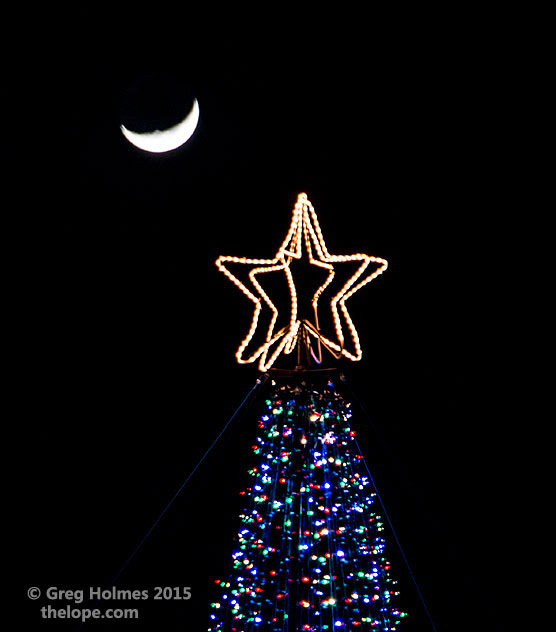 Also back is the Polar Bear Express aboard the #60 street car. 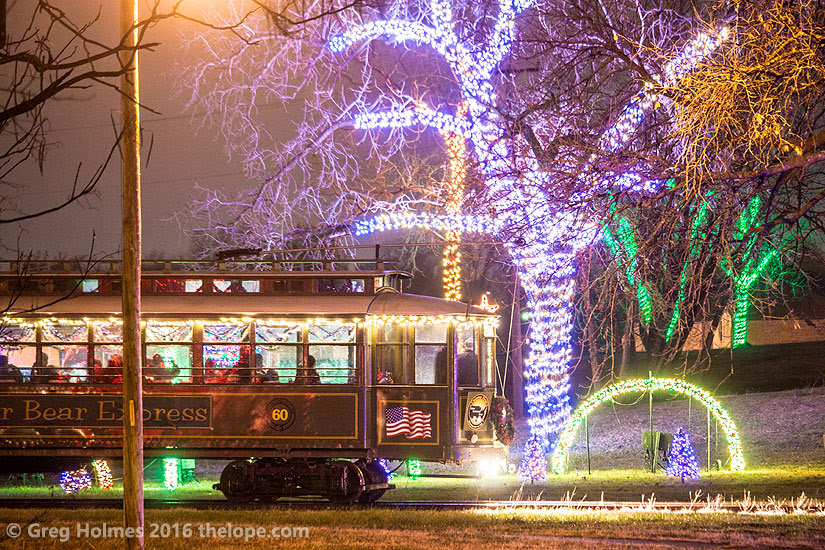 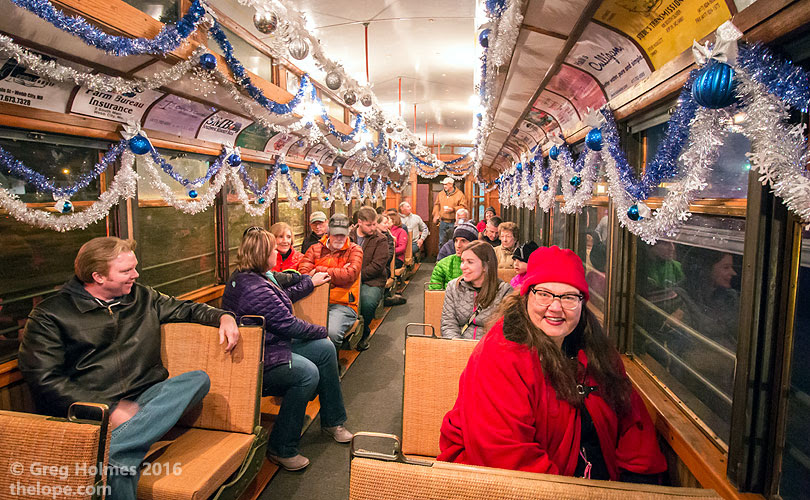 They have designated time blocks for the rides at 5:30 and 7:30 p.m. Tickets, if available, can be had on site or at Webb City's City Hall, 200 South Main Street and at the Chamber of Commerce at 112 West Broadway. Prices are $1 for everyone over three years old; kids under 3 are free. See more of its history here. The metal walking bridge in the park is decked out in lights again, though the trees have grown since this photo. From the Webb City website: "At one time the Georgia City Bridge was the oldest extant all-metal vehicular bridge in the state of Missouri. Built in 1871, it is a one span, bowstring arch truss bridge." 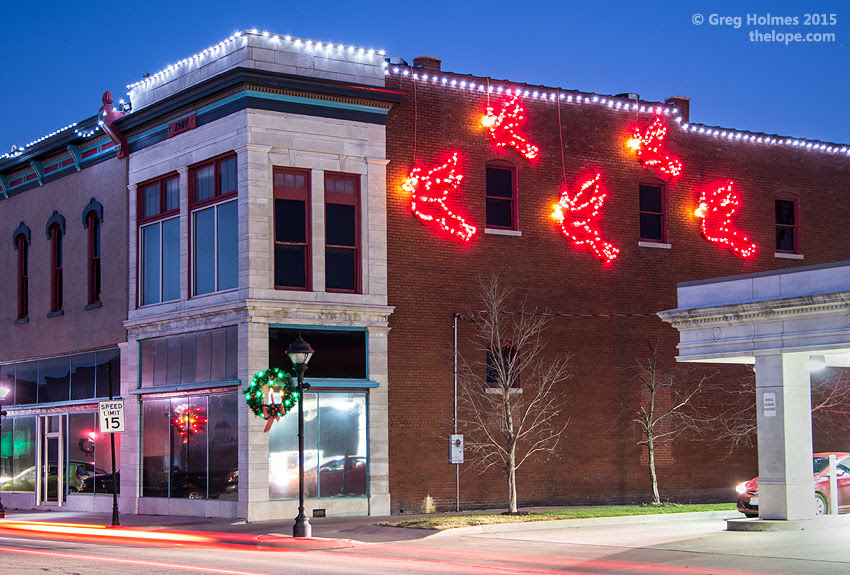 The Webb City high school mascot is a cardinal, as seen in this flock of same that has been in place downtown for at least the last seven Christmas seasons. It's up and running in 2016 as well. Webb City uses wreaths with electric candles downtown on its lamp posts and alternates the colors of red and green. 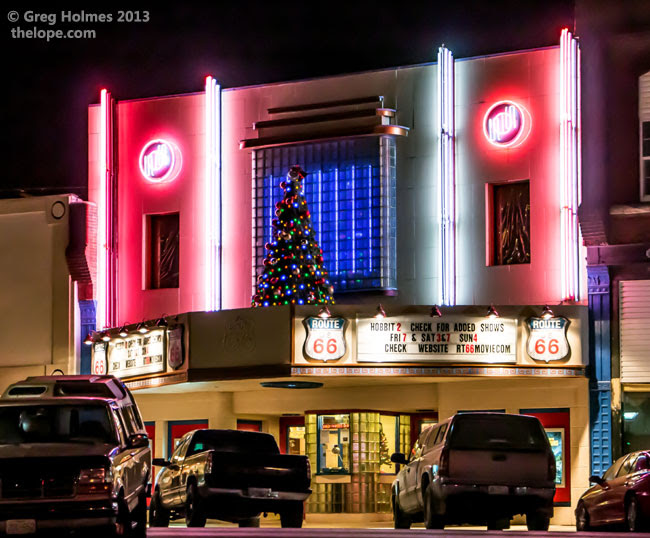 While not strictly speaking a Christmas attraction, the Route 66 Movie Theatre is often decked out for the holiday and shows Christmas movies. This year (2016) it does not have a Christmas tree atop the marquis. 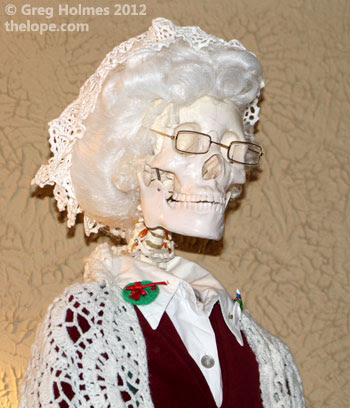 Barely in Webb City and just across from the SW corner of the Joplin airport are two homes with novel decorations. This one at 25 Colonial Drive outlines its architecture and uses dripping lights in vertical windows and a Gemmy Industries life-size Santa. It looks exactly like this in 2016. 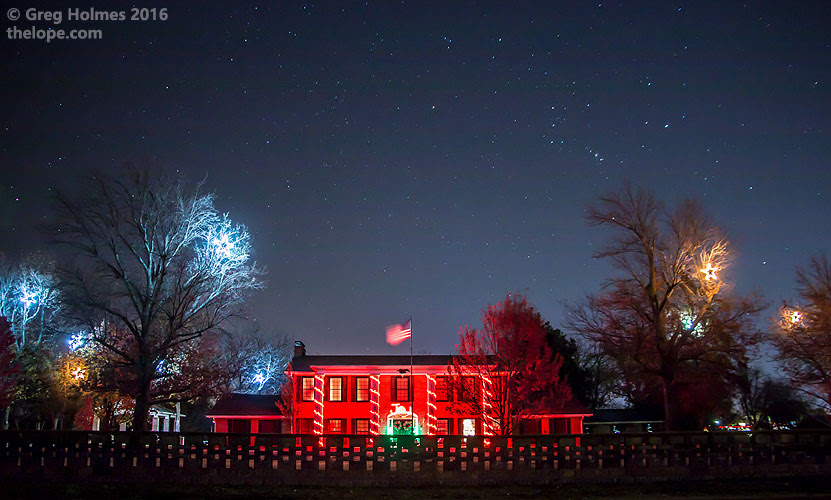 Just north of the above home on S Colonial Drive, the constellation of Orion rises above a house displaying "Joy" and several of their own stars. This is one of my area favorites as they often do something similar with the stars in trees. Here's what they did in 2014.

Some years, the  house on the SW corner of  W 3rd St. and S Webb Ave. displays huge decorations of the type one usually sees in municipal displays - not in 2016 though.

Usually another noteworthy home is at 329 S. Oronogo on the NE corner of W. 4th and S. Oronogo. but there'll be a year's hiatus due to an injury  the owner suffered. We wish her well and thank her for some fun displays.

posted by Ace Jackalope at 4:57 PM