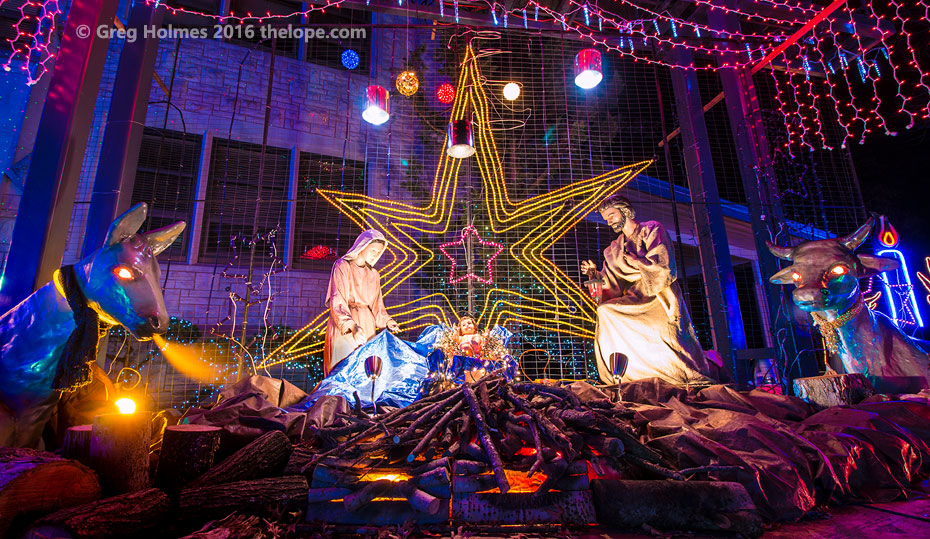 Fog-breathing livestock regards the baby Jesus with glowing red eyes. The infants crib appears to rest atop a pile of wood and faux fireplace logs. The brothers at the Congregation of The Mother Co-Redemtrix have outdone themselves this year with their annual "The Way of Salvation" drive-through extravaganza, open Thursday-Sunday, 6 - 10 p.m. This Vietnamese seminary in Carthage changes up their nativity scene every year; a friend of mine nicknamed this particular style "Disco Jesus." The attraction is free with a donation booth at the end. 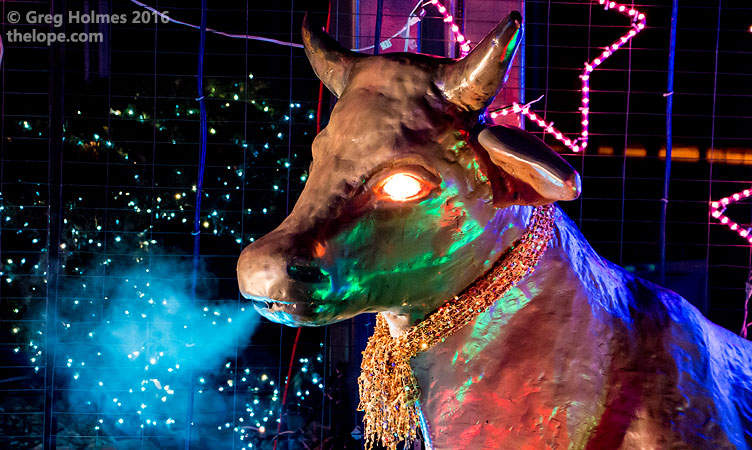 Really, I could bring a sandwich and sit and stare at this display for an hour. I love it that much. What others may see as garish, I appreciate as an expression of enthusiasm that has no desire to be subdued. 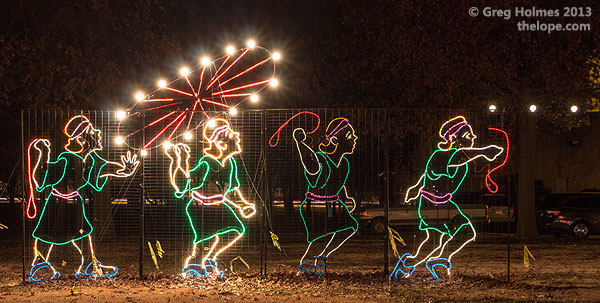 The drive roughly tells the story of the bible. This is a time exposure of the David animation. There's usually some unrelated whimsy mixed in. This year they have a hula-dancing dog. 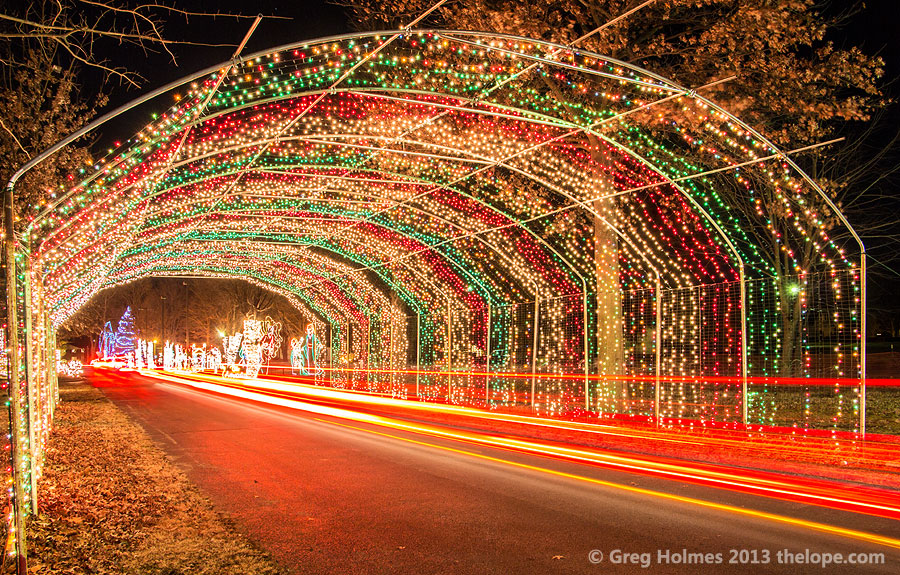 Some features stay pretty much the same, such as this fun light-chasing tunnel. 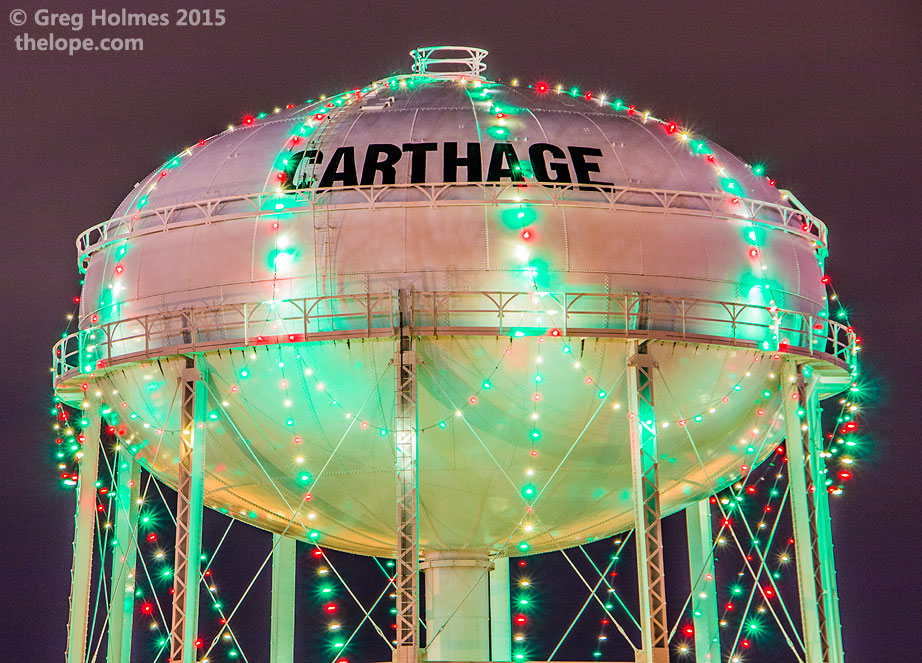 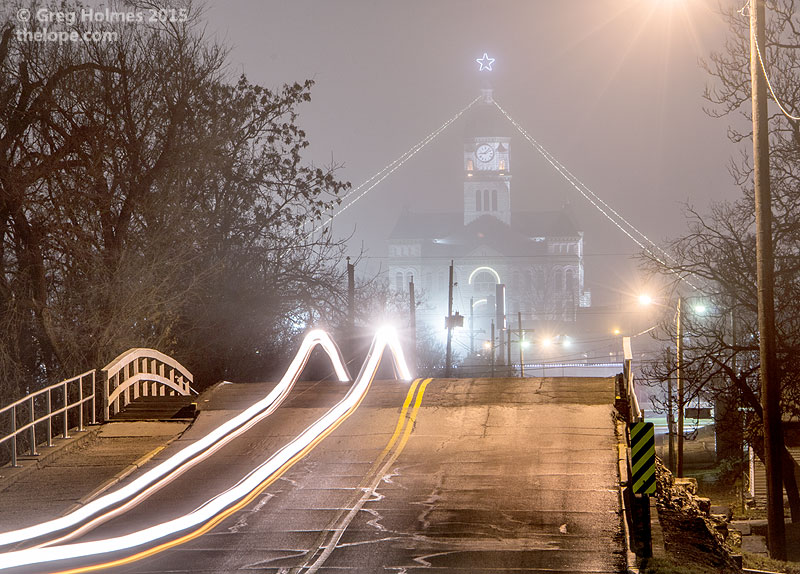 The Jasper County Courthouse with Christmas lights is seen on a foggy night last year from the Oak Street bridge on Route 66, also known as "Tickle Tummy Hill" and the "Whee Bridge" due to the sensations cause by driving over the bridge at significant speed. 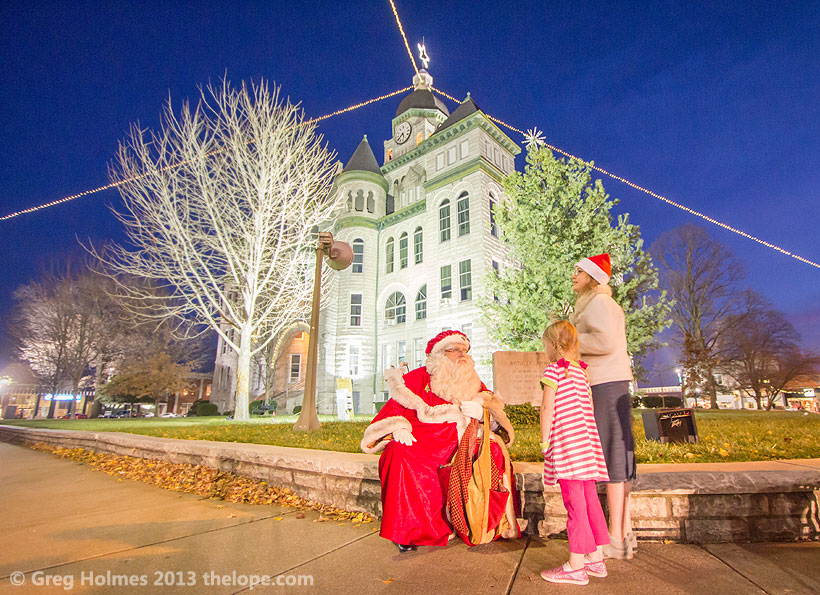 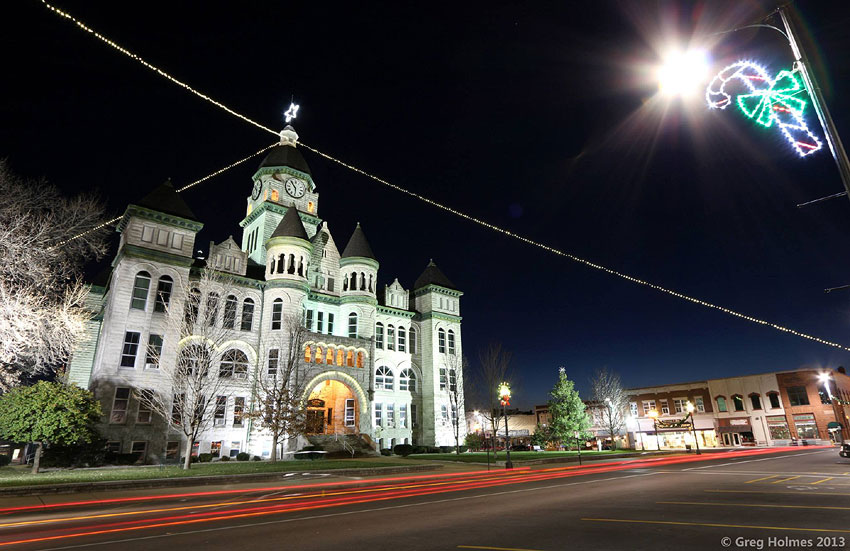 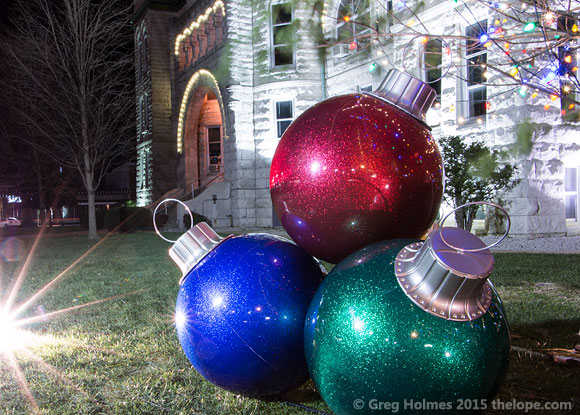 This year there are giant ornaments on the south lawn, beside a decorated tree with a Santa beside it. Here they are in 2015. 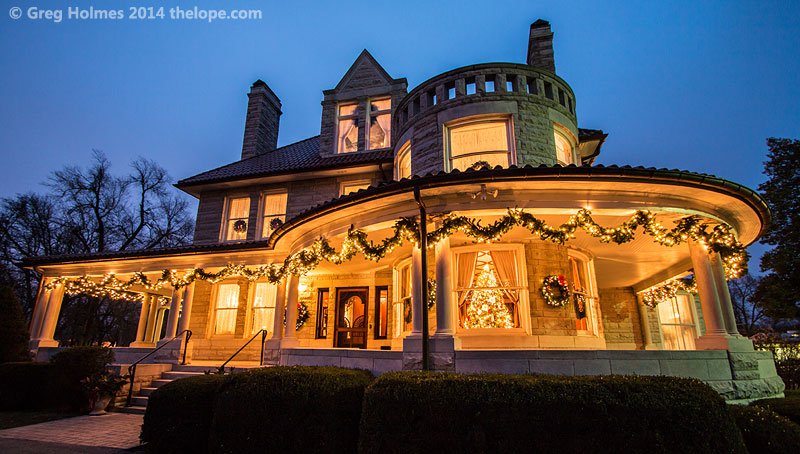 Many of the historic homes along South Grand and South Main streets are decorated, such as the Phelps House at 1146 S Grand Avenue, seen here in 2014. It is decorated similarly this year. The house will be the base of the Carthage Christmas Homes Tour and Tea on December 3. 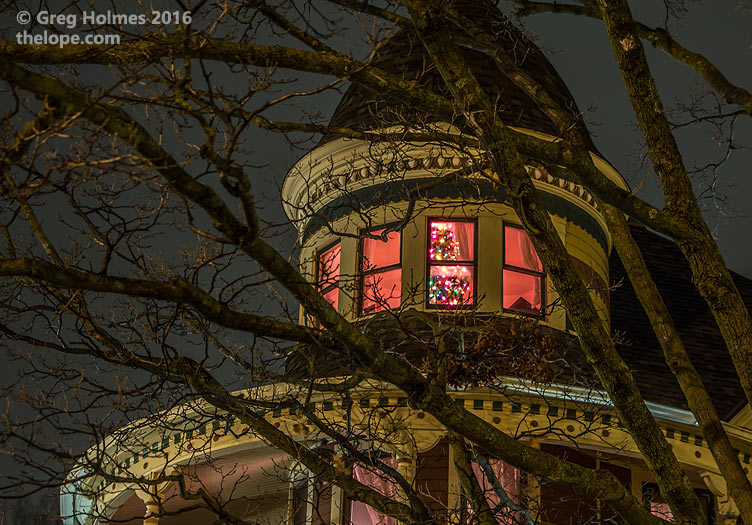 The Horus Baker House, 205 W Macon St, has Christmas trees on three floors right above each other. This is the top one.

1406 Maple has a computerized display again this year, just as in this picture from 2015. The tree syncs with music broadcast at 106.1 FM. This year the tree is off to the side on a trailer. I bet it'll be in the Carthage Christmas parade on December 5. 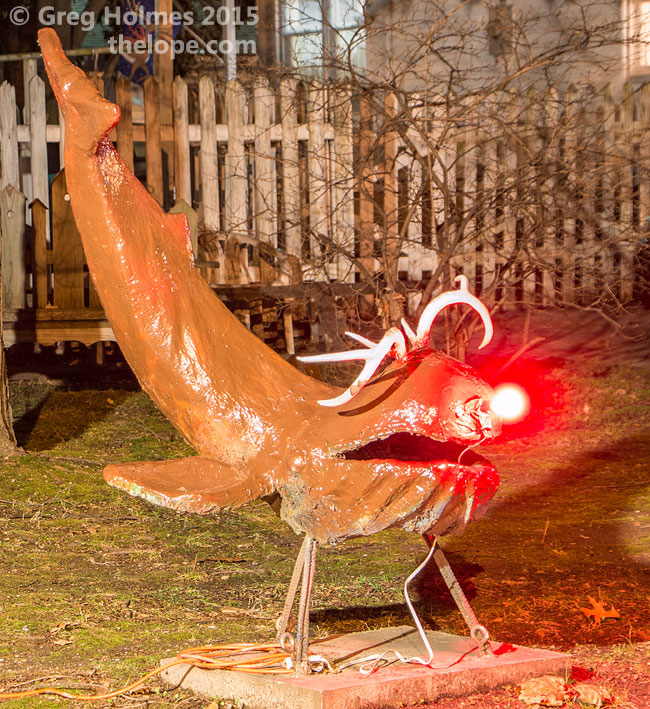 The whale sculpture at 1314 S Garrison has antlers and a red nose again in 2016. 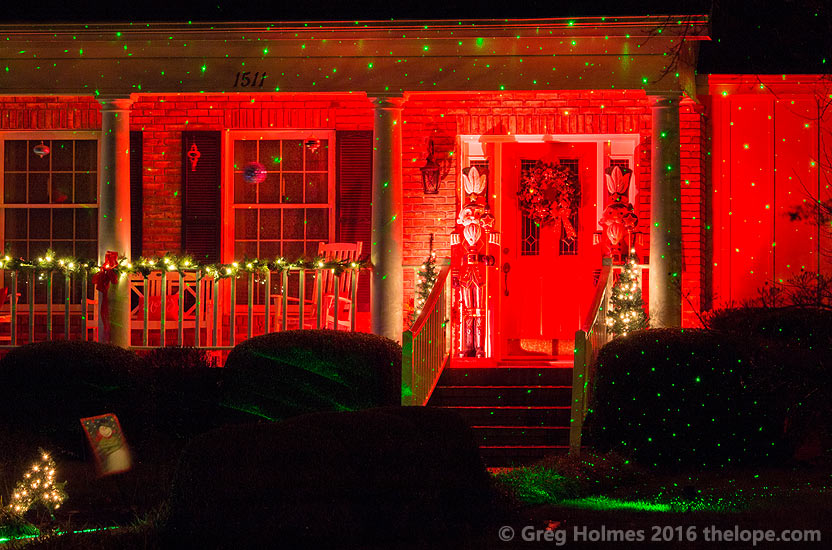 This was the year that laser projectors proliferated. I'm always impressed when one is used to contrast other lighting, as with 1511 Grand.

This was in the SE part of town.

Precious Moments, 4321 S Chapel Road, just SW of the city, gets a lot of publicity but the building closes at 5:30 and the light display outside is modest for such a big deal attraction. Here's their light frame nativity.

"Mt Moriah Lights" is a computerized Christmas light display set to music that was started in 2010 as a high school gifted project. It is at the Mt Moriah Methodist Church, 15506 Nutmeg Road, ten minutes north of Carthage. The free light show is open this year Dec 2-4, 9-17 and 19-31 from
5:30 to 9:30 p.m. For more information see their website.

posted by Ace Jackalope at 4:23 AM