The Lope: Fred and Red's in Joplin to Close

Fred and Red's in Joplin to Close 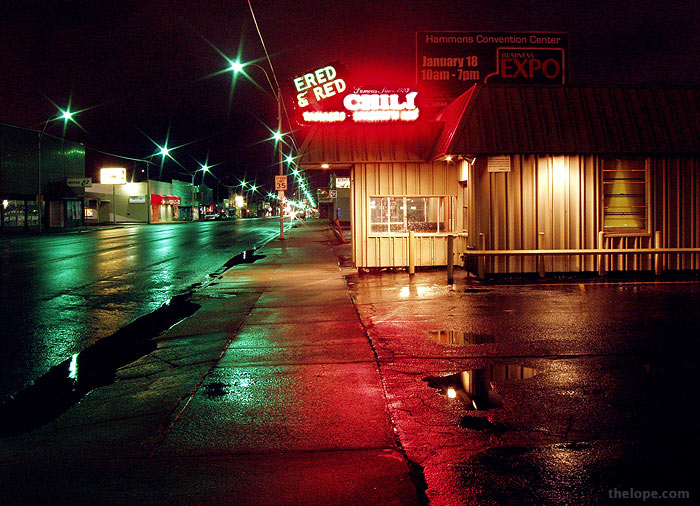 Like a beacon it draws us - we, the expatriates of Joplin, Missouri - when we leave our houses, our diets, and go home to that Spaghetti Red...oh, and to our families.

Alas, it seems the beacon will soon grow dark and the chili congeal in our veins no more. It looks as if Fred and Red's survived last year's horrific tornado only to close this year due to retirement. Amber Wilcoxson Tankersley, daughter of Fred and Red's owner Larry Wilcoxon, had this to say on a facebook page for the restaurant today:

Larry Wilcoxon, who has worked at the restaurant for about 56 years, since he was 13, has been trying to sell the business for a few years. Will there be last minute reprieve from a buyer? Who knows.

The distinctive U-shaped counter at Fred and Red's has 23 stools arranged around it. This was shot at closing time (9pm). During peak hours it's quite busy and those who finish their meals yet still occupy a stool to fix their makeup or play on their phones can draw rueful stares from those standing against the wall, waiting to be seated. 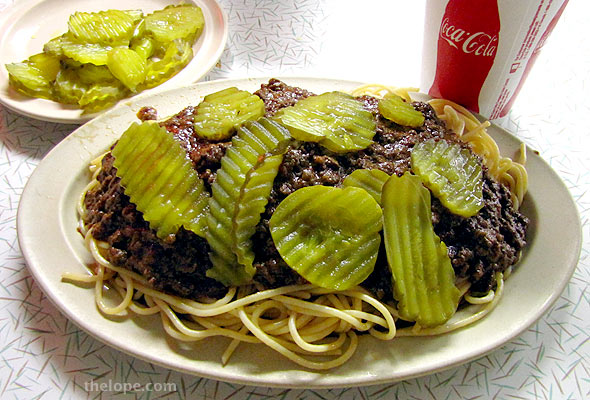 And here is a plate of my favorite Fred and Red's offering: Spaghetti Red (yes, I capitalized it). It's their chili poured over...nay, caressing a plate of spaghetti. Over this, I always lay a generous blanket of dill pickles. Some people like onions on their spaghetti red; others like cheese. To each his own, but I favor the delicate alchemy that takes place when pickle juice and chili spices form a two-layer treat for my tongue.

How healthy is it? Well, this is what I tell myself: the grease lubricates your veins and arteries like water in a water slide. Your red blood cells (which actually kinda look like inflatable pool rings, you know) are thus able to slide through with ease. That's my reality. Don't challenge it. 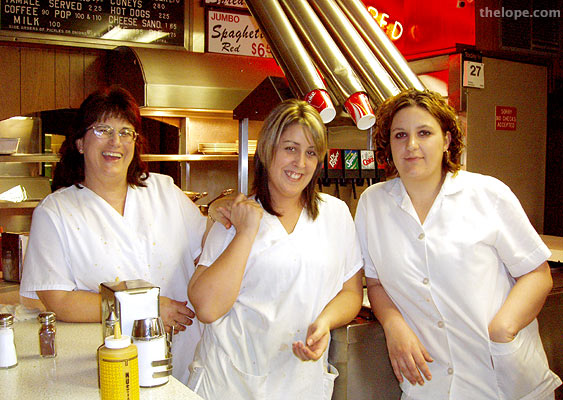 "Those gracious ladies in white" - the ladies of Fred and Red's used to always wear white, as referenced in a line from a Dan Daughty poem that was once printed on the backs of guest checks. Somewhere I've got one of those checks; if I find it, I'll scan and add it. (another photo) 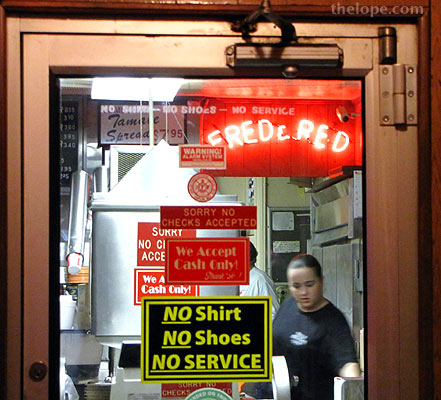 A few years back they switched to black uniforms. Now I tell them they look like chili ninjas. 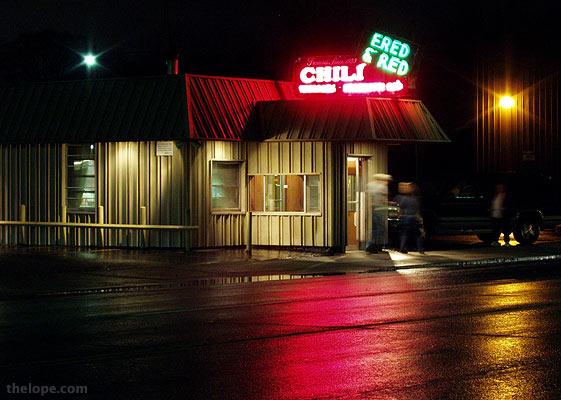 I always enjoyed photographing the restaurant and its distinctive neon sign when the pavement was wet and reflective. 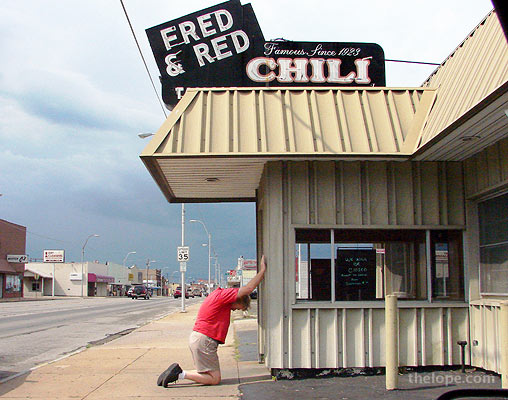 Fred and Red's closes every August for vacation of the owner and employees. It's probably a good time to do so, as Missourians think it's hot there in August. (I live in Kansas and can tell them what hot really is.) Sometimes August begins at the end of July if they run out of chili and don't want to make a big batch. Here, my brother, Steve, expresses his dismay... 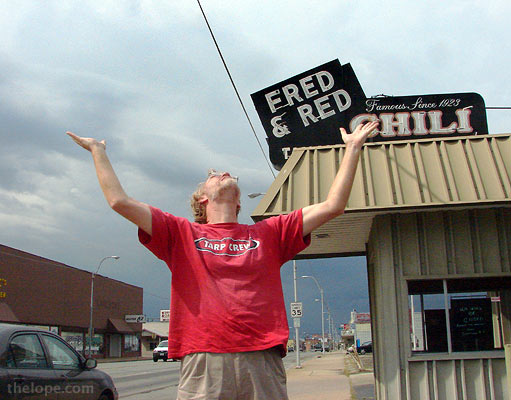 ...and his grief to the Gods of greasy spoons upon discovering the temple is closed for a month. 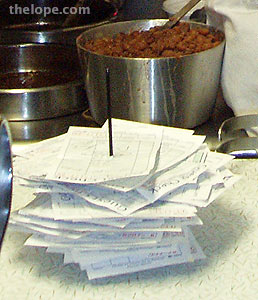 During the August chili hiatus, some people order bricks of chili and freeze them. I've even heard of it being shipped overseas. Personally, I think there's an energy field in the restaurant proper that keeps the stuff fluid and tasty. When taken outside of that field, the magic fades and the stuff congeals. Really, it can still do that when you're eating in the restaurant if you take too long and your plate cools. If you eat it when it's too cool, it can form a film on the roof of your mouth. This offers a chance to test whether Coke can dissolve anything. I can tell you it can and does dissolve that chili film.

Quite a few years back, Wilcoxon switched from Pepsi products to Coke and sold me a Pepsi wall clock that had been in Fred and Red's for years. It still hums away on my kitchen wall and reminds me of Joplin and Fred and Red's. 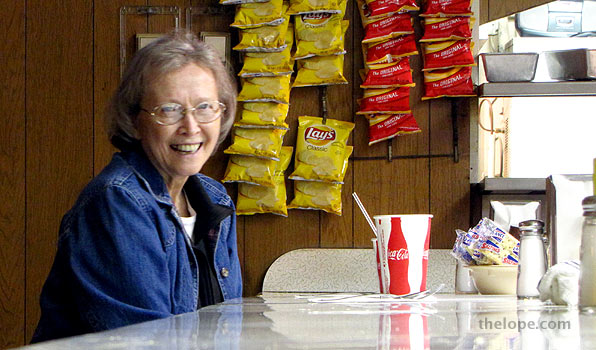 My mom seldom looks happier than when awaiting a bowl of chili. Really, I should take offense, but I know how good it is.

As to the name, though perhaps properly known as "Fred and Red", locals tend to call the place "Fred and Red's."

The business was started in 1923 by Fred Herring in a building that I believe still stands on the NW corner of 10th and Main streets. It moved to its current spot at 1719 South Main Street in 1943. William "Red" Wilcoxson, a butcher who had been supplying meat for the chili, bought half of the restaurant in 1956 and it became Fred and Red's. Herring retired in 1973 and died in 1975, the same year Red Wilcoxon retired, leaving the operation of the business to his son, Larry. 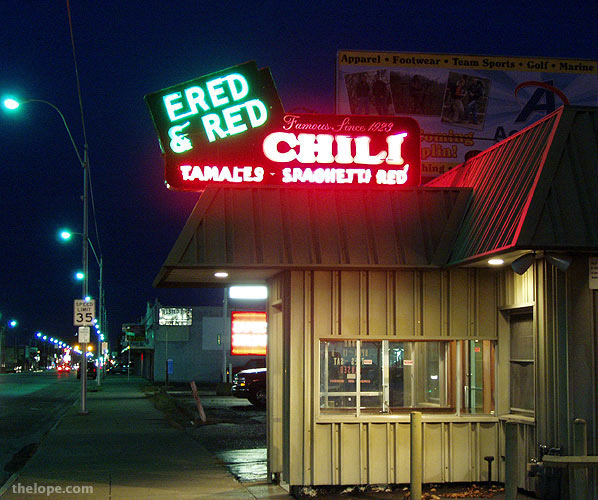 Every town should have such a culinary mecca - not haute cuisine, mind you, but the place people go for comfort food with their own local twist.

As I travel, here's how I find that place in any given town. Walk up to someone who is obviously local at a convenience store (police are good for this) and ask: "If you moved out of town and came back after ten years, where would you go first to eat?"

Here's the text from the back of the old customer tickets:

I was hungry and tired,
And dead on my feet.
Been looking all over,
For a good place to eat.

When some 'fellers' went by,
I heard what they said.
They had one of those specials,
With Fred and Red.

I sauntered on down,
To the place they had been.
I looked the place over,
An then I went in.

They were standing in line
With a smile on their face.
So I knew at a glance,
I was in the right place.

It was clean as a hound's tooth,
The old timer would say.
That was nothing unusual,
They just keep it that way.

The food was delicious,
An the best of its kind.
I've looked for some better,
But none I could find.

Those gracious ladies in white,
That serve us our spread.
Are a wonderful 'barg'in',
For Fred and Red.

You can find Fred and Red's at 1719 South Main Street in Joplin, Missouri. Normal business hours are Tuesday-Saturday, 11am - 9pm. They are closed Sunday and Monday. There is no listed phone number and it's a cash-only business.

Remember to put pickles on your Spaghetti Red. You'll thank me for it.

Sounds like a great place that I sadly doubt I'll get to experience. I MAY try the pickles thing with some Cincinnati chili though it doesn't seem all that enticing to me.

Always was a tamale spread person myself. This is a tragedy.

The Springfield, Missouri eqivalent of this is Casper's ... been in business 101 years, literally, really. Etta Mae Buckner has been a waitress and cook there over 40 years and is retiring this year. We can only hope someone in Joplin decide's Fred & Red's is their destiny. Places like this shouldn't be allowed to end.

The Springfield, Missouri eqivalent of this is Casper's ... been in business 101 years, literally, really. Etta Mae Buckner has been a waitress and cook there over 40 years and is retiring this year. We can only hope someone in Joplin decide's Fred & Red's is their destiny. Places like this shouldn't be allowed to end.

I actually wish the pic of the food had not been posted. Now I am craving that taste! It was like no other, and very addictive. I stopped in dozens and dozens of times from 1986 to 2006. Very sad to think I will never taste that wonderful combination of pasta, meat, pickles and crackers ever again. Sigh......