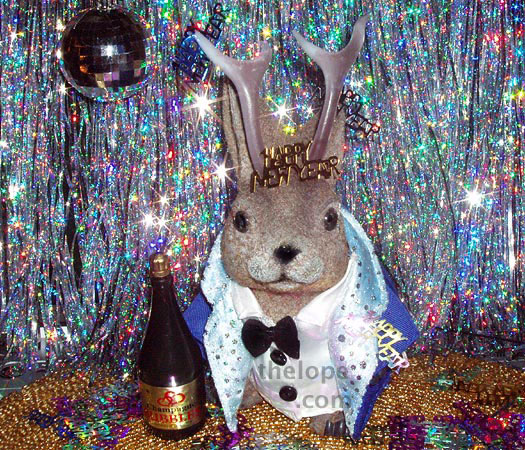 I never seem to come up with a better year-closer than this picture, and frankly, I still like it. It was shot in a motel room after a New Years Eve party, using glittery stuff I bought on clearance in party stores and arranged using my laptop as a base.

For this year, I was tempted to shoot a picture of a toy coffin with "2011" painted on it, and run a comment like "let's bury this thing because it stinks already", but that would be too negative a perspective, influenced by personal losses.

My family and I lost someone dear, and my mother came close to death twice - once when Wal-Mart collapsed around her during the Joplin tornado.

The second time we nearly lost Mom was a week later when a stress-related heart condition sent her to the hospital just as I had finished a job taking stills and video of the President across town. 2011 had that kind of contrasts.

Wanna see the scariest thing I've ever shot? I don't even watch this because the audio now gives me the chills. On May 22 I was shooting video of cicadas when the warning sirens sounded the second time - the time when they weren't for something we didn't need to worry about:

In a few minutes those trees you see starting to move in the foreboding wind will be tortured and broken. 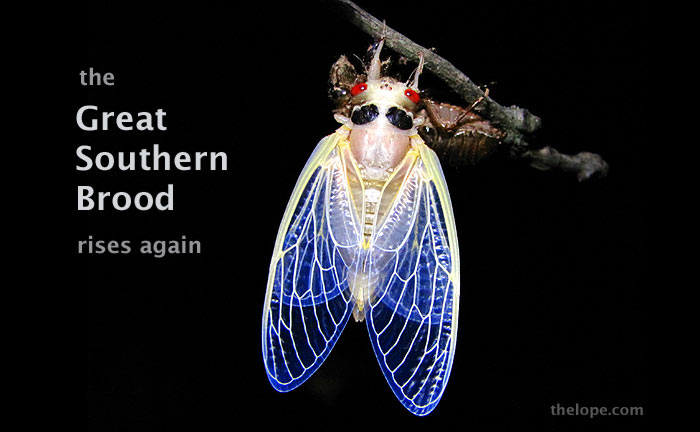 Well, Brood XIX of the 13-year periodical cicadas emerged this year right around the end of April and and I was able to document it in Arkansas, Missouri and Kansas during the beginning of its run, but was then mostly cut off from it by the post-tornado Joplin curfew and the need to stay close for medical reasons.

But it's really not so bad. Most folks around me are alive and kicking, coping with their medical, job and relationship stresses, and doing so with grace and aplomb. How often do your hear "aplomb"? - not too often, I'd say.

And so we go into 2012, not really significant were it not for the artifice of a calender. I'll be publishing more Christmas posts, because I saw some nifty things and didn't have time to even look at the photos myself.

May you share a Merry continuing Christmas with us, and have a Happy New Year.

And you know that trip? The one someone you care about wants you to go on with them? Do it. Tomorrow is nebulous. Today is a gift; accept it.

posted by Ace Jackalope at 8:40 AM

The only way that storm could have been any scarier would have been to stick a big frickin' CICADA in the middle of it. Yecch. (As I think about it, you could make a spectacular horror movie about a town where the tornado sirens go off, but what appears to be a funnel cloud moving in is actually a giant swarm of omnivorous cicadas from hell that eat everything in their path, including people. *Shudder*)

I'm shocked at your stance on our six-legged relatives!

I'm sure the hundreds (if not thousands) of cicadas that labor diligently under your property sucking on roots with their pointy lil' proboscis' (sharp - ever felt one?) mean you no harm. And if some of those roots stretch under your house and you can hear them drilling away as you lay your head to pillow, be assured that they probably don't have the mental capacity to hold a grudge - unless of course they're responding to environmental threats by evolving the vengeful group consciousness that post-apocalyptic historians will someday call the "Red Fork hive mind."

Dire improbabilities aside - even though Brood IV emerges in 2015 and may encompass Red Fork, what's the worst that could happen? It's not like they'll emerge all at once by the thousands on one little piece of property to plot and plan as they dry, hanging around quietly like Hitchcock's birds until they all sing at once in a deafening chorus (when they're not making each cubic yard of air an obstacle course).

My chickens would love that. So would the big garden spider who spends most summers hanging out in a giant web stretched between the two evergreens in my front yard. I came home one day to find her extracting the vital fluids from a cicada three times her size. Kind of reminded me of that scene in The Dark Crystal where the Skexis hooks the Podling up to that machine and drains it of its "essence." If a spider could smirk, I'm pretty sure that one would have.