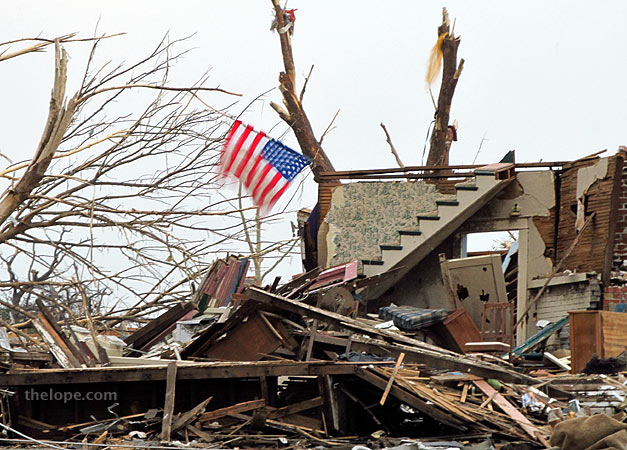 I've had little time to compose a proper post but here are some pictures and videos taken in Joplin, Missouri the last few days. Electricity and Internet access have been at a premium and I've had other concerns. The scene above is on Joplin Street, somewhere near 26th.

I was in Joplin, two to four blocks South of the path of the tornado when it hit, depending on how much destruction one requires to define the path. Specifically, I was on South Brownell Avenue between 29th and 30th streets when the tornado hit.

I was staying with my mother, awaiting the funeral of a family friend and studying a group of periodical cicadas. Mom had gone to Wal-Mart at 15th and Range Line. I was actually shooting video, waiting for one of the cicadas to sing when the sirens sounded for the second time in a few minutes. I didn't know for sure at the time that there was a tornado involved but I began shooting video of the wind and rain.

Now, the interesting thing is that you can see the wind direction change in this series of videos. I believe this is consistent with the passage of a counterclockwise rotation.

5:45 PM, looking east - the wind is stronger and still from the south:

5:47 to 5:48 PM, looking east - this is the most intense video I shot. The wind is from the west, meaning, I think, that the tornado is more or less to the north of me:

5:53 PM, looking east - this is the tail end, The wind is now coming from the north:

Unknown to me when I shot the videos, the Wal-Mart my mom had gone to was destroyed. She was sheltered in a womens rest room at the back of the store and received only cuts and bruises. Her house was only slightly damaged but trees were significantly harmed. She was lucky. I was lucky. Anyone near a monster that big who gets out with life, loved ones is lucky.

I have chosen not to go out and sight-see for the mere sake of photographing devastation. I've seen this before and its name was Greensburg. I don't need any more "Holy crap, look at that car wrapped around a tree" pictures just for the sake of having them. I have shot a few pictures when out on errands, like locating mom's now-trashed car. I'll be back this weekend in a professional capacity and I'll shot what I need to document this event and tell the story.

Funny how the locations associated with disasters change when a new one happens. I guess for Midwesterners "Greensburg-like" devastation now becomes "Joplin-like." It's as if monster tornadoes, tsunamis, nuclear melt downs and earthquakes need a new victim once in awhile like abusive spouses moving on to a new mark. Sunday, "monster tornado" made Joplin its new b*tch.

Traveling around Joplin after the tornado reminds me of the ever-changing staircase at Hogwarts in the Harry Potter stories, the stretches of road between fallen trees, waist-high power lines, barricades and anchored work trucks being the flights of stairs. The locations of these things change constantly and they should; it's the inconvenient path of restoration.

I drove down to west 20th Street the night of the tornado to check on an office building my extended family owns. Normally this is a ten minute drive at most. It became a circuitous round trip of about two hours using what roads were passable and it took me out of town to approach the building from the opposite direction. When I got there the air was filled with smoke from nearby fires started by, I suppose, natural gas leaks. Oh and the air also smelled of said gas...real secure-feeling, that is. The smoke was so thick my flashlight beam made the mundane office interior look like the inexplicably fogged house interiors in every 1980s Spielberg movie.

The building was pretty much OK and had a land line phone. Now, if you ever need a justification for keeping your land line, this is it. The thing worked when cell phones were once again a thing of the future.

After checking the office, I went to an unaffected Wal-Mart on West 7th Street for bottled water (we were under a boil order) and a few other supplies. The store, even in the middle of the night, was populated by dazed people buying water, toiletries and clothes to replace the ones that now dress the fields of a different county.

On the way back from Wal-Mart, I couldn't turn south at any of the logical places so I ended up miles out of the way on Duquesne Road between 7th and 32nd streets. The area between about 20th and 26th streets looked like the trench warfare scenes of WWI or maybe Tolkien's Mordor. I understand the area around St Johns Hospital looks like that but I haven't seen it in daylight yet. I haven't seen much, in fact, or have all that much information. One of the barbs of being in a disaster is that you often don't see the forest because you're one of the trees. No electricity, cable or Internet means you have a rumor-dominated context of the scene you're standing in the middle of.

So, here are some photos. They're mostly shot out a car window on the fly, so they're not good, but I have no idea how many photos you've seen so here you go. 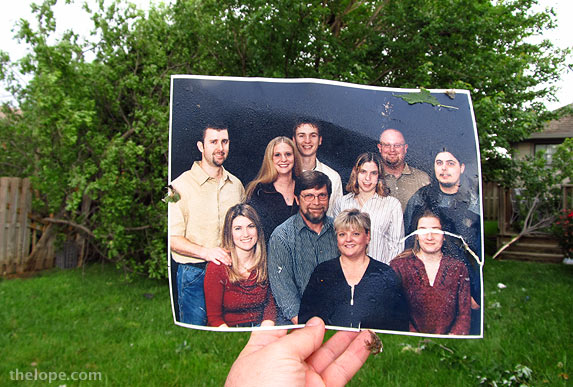 The tornado left this family photo in my mom's back yard. You can see where the neighbor's oak tree fell through a fence. I have no idea who these people are, but if you do, tell them I have their picture and they look good even as flotsam. 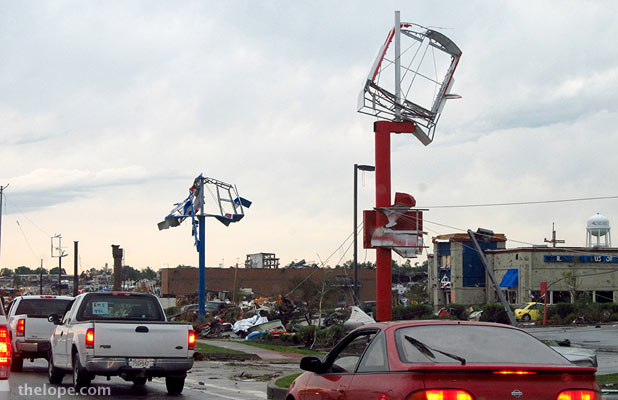 We went out to find mom's car the day after the tornado and saw Range Line. Like I said, they're not good pictures, but this is what much of Range Line looks like.

The Bel Aire Shopping Center - I hope if they rebuild it they keep the wonderfully mid-century name. 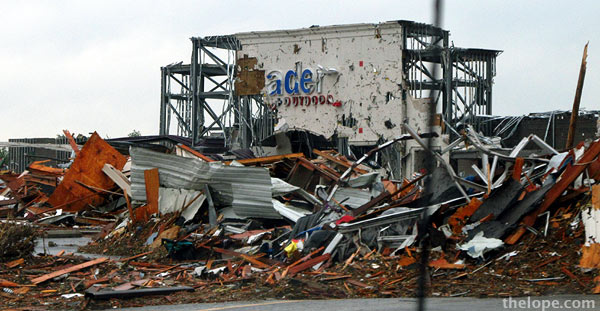 ...and from the Wal-Mart parking lot at 15th and Range Line 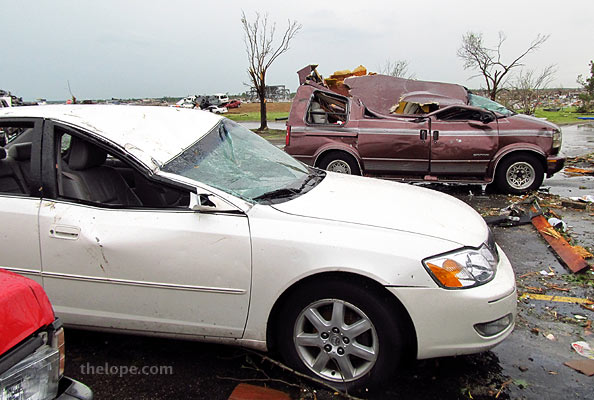 Mom's car - I don't know if something hit it or if it rolled and landed this way. There does not appear to be paint from another car on it.

Elsewhere, cars were tossed about like Hot Wheels after a kid's tantrum. (photo, photo, photo) 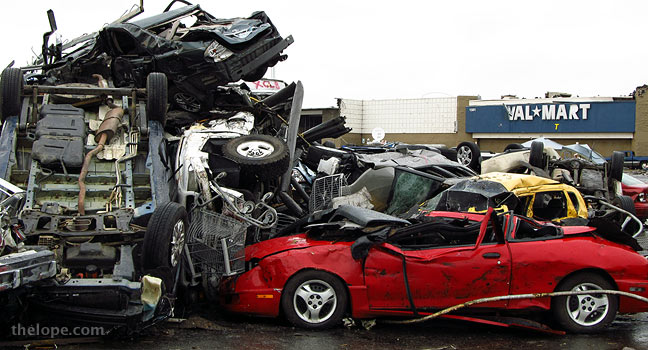 Cars were in piles separated by blank spaces. At first I figured they'd been stacked by rescue workers but was told the tornado left them this way. (photo, photo, photo)

Only the Wal-Mart facade and some of the superstructure is standing. You can see all the way through the framework on the right. (photo)

This is looking southwest from the Wal-Mart lot. I include it only to illustrate that there are vast stretches where it's very difficult to identify anything. 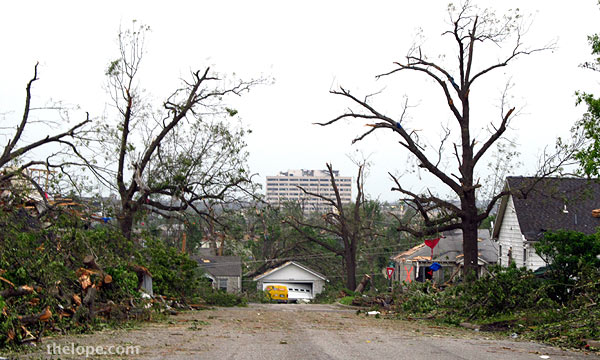 Tuesday night there were strong storms coming so we went to the house of friends who have a tornado shelter. We would stay there for the night because of Joplin's new 9pm to 6am curfew. On the way over we drove down Joplin Street and I shot a few pictures, mostly from the car. This is St Johns Hospital, which should not be visible from here. (photo)

I went to kindergarten here when it was Playhouse Kindergarten. 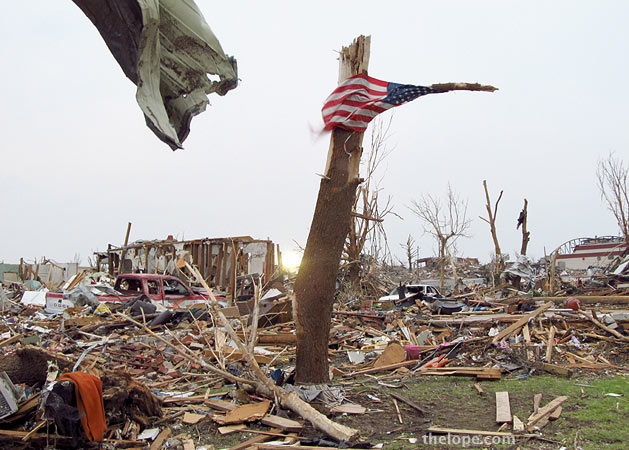 You see a few American flags after tornadoes.

Of course these things bring out the best in us, too.


On the way back to mom's this morning we had to drive down 15th street and Range Line. Here's 15th as it approaches Range Line:

The Goodwill Store - I've bought a few nice old tiki shirts there. I really hope it isn't damaged badly as I can't think of a better time to have thrift stores: 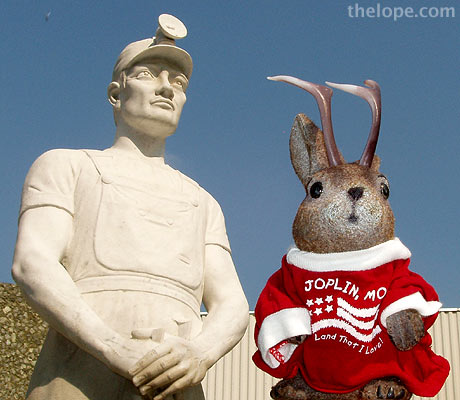 I have been impressed by the outpouring of concern and aid for those affected. If you want to help, you might consider the American Red Cross. (Ace Jackalope at Spiva Park)

posted by Ace Jackalope at 9:38 AM

Thanks, Ace. Glad you and your mom are OK.

I just had a chance to see this post. Wow, I am SO glad that you and your mother escaped injury. What an experience that must have been!