This is an archive of the 2011 update to Hutchinson, Kansas, Christmas Lights and Sights, 2010.

Our very own nuclear scientist and Christmas robot inventor, Dale Hankins, created a new automated child to seek "Grandma's House." This one was parachuting to Grandma's House when he got stuck in the "Dumb Tree." Here's a video of the whole attraction: 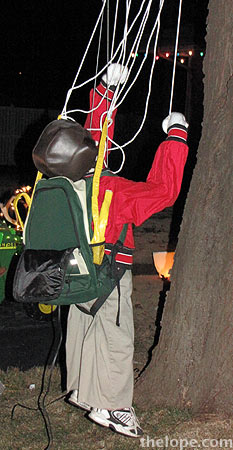 And here's the flailing robot child.

All of the neighborhood displays shown in Hutchinson, Kansas, Christmas Lights and Sights, 2010 are just as good as they were last year. The sound and light synced houses are running again. The only real change is that Hayes Sight and Sound does not have the "A Christmas Story" leg lamp display this year.

Here is a brief walk down part of Main Street from 2nd Ave going south on the east side of the street, starting from Cottonwood Quilts. Note also the window display at Payton Optical. This was during Third Thursday on December 15, 2011:


The Fox Theatre will be showing Polar Express on Christmas evening.

If you're visiting Hutchinson and have time to see only one thing, go for Dale Hankins' "Grandma's House" display at 25 Countryside Drive, where that street meets Downing Road. There are light show houses, theme neighborhoods and drive through frame displays all over the country, but I've never heard of anything like Dale's display anywhere else.