The Lope: Beyond the Fields we Know

Beyond the Fields we Know 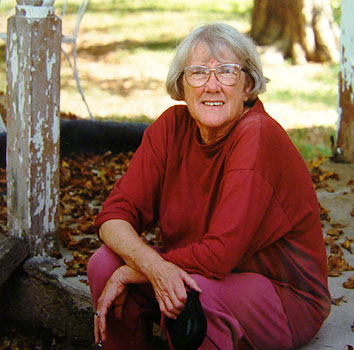 Madella was an artist and a friend. For many years, she and her husband, Marvin, who passed in 2004, were very generous in allowing my family and I to roam their land in Oklahoma. 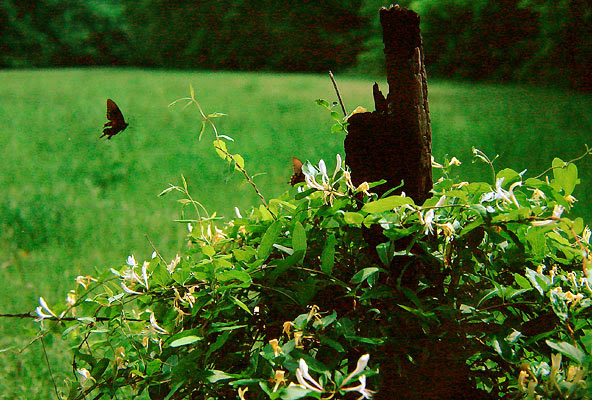 Although I had spent much time there as a child, it was my teenage years and my early 20's that I remember most fondly. This was a time when I roamed, virtually awestruck, over their land and learned to use a camera to record a glimpse, however inadequate, of what I could see and feel there. The unforgiving Kodachrome's 25 and 64 taught me that there are many flavors of sunlight. And I saw colors shout and whisper as I have not seen since, except perhaps in the hues of New Mexico. I used to show these slides to Madella, holding them up to the sunlight. She'd squint and tell me something about the history of the land that I didn't know. 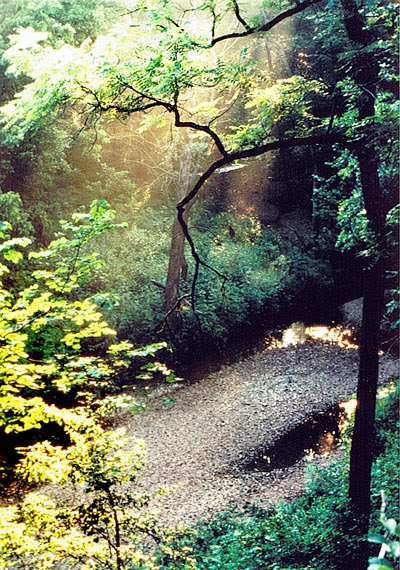 I'm not a morning person, but I'd stay up all night, hike to adjacent lands, and await the dawn, listening to the shift-change of nocturnal to diurnal. In doing so I learned with absolute certainty that if there is a god, it is nature itself... 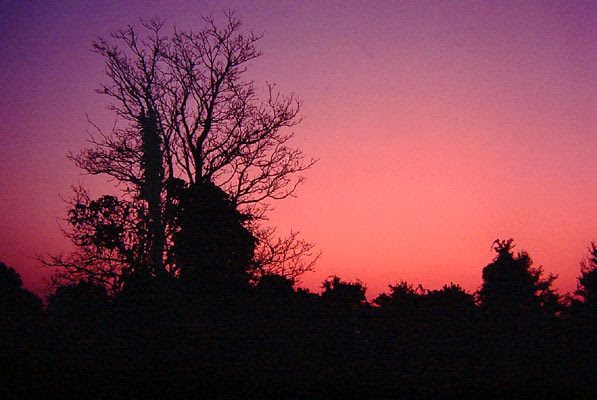 ...and that light is its gift to us. During the early 1980's, we were favored with significant volcanic activity around the globe, the upshot of which was that we had spectacular sunset skies due to the absorption of colors other than red by the fine ash in the upper atmosphere. This is actually looking south, not west. There was that much red. 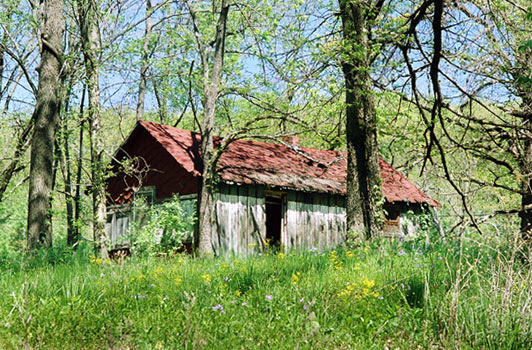 This is one of two cabins we once owned on Marvin and Madella's land. By the time of this photograph, it was long-abandoned and an add-on screened porch and back room had been removed.

Even in its long, slow demise, the cabin was beautiful. Madella painted, and I occasionally gave her a picture to work from. I considered it quite a complement.

Damselflies flit like fairies around the creek, which is fitting since they live for awhile as nymphs in the water. 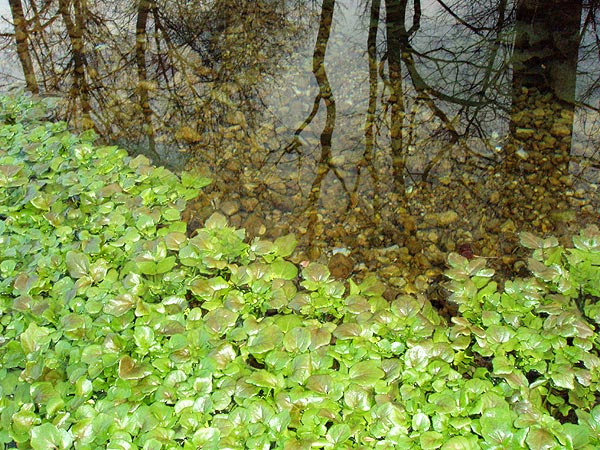 The water. The water was the life. Revered by us but occasionally poisoned by industry upstream, it would always recover. Once in a while, as in 1993, it would rise up and remind us that what is beautiful can also be terrible. 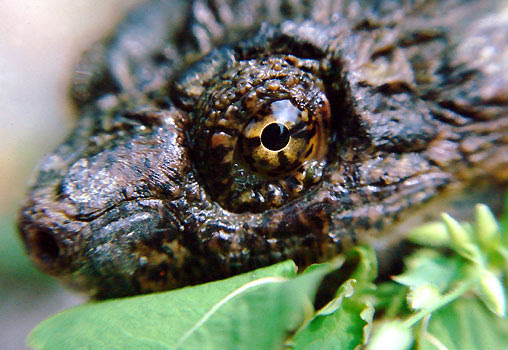 I used to capture this snapping turtle every year throughout the late 70's and early 80's, just long enough to photograph it. It must have seemed to the turtle like an alien abduction. The poor thing had lost its tail in some previous incident, so I always knew it was the same one. I owned only a standard 50mm lens when I shot this, but I could reverse it and get a makeshift macro. 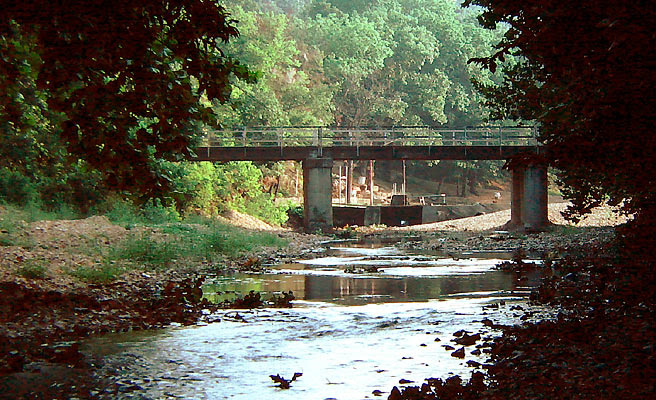 The snapper lived under this bridge, which was replaced awhile back. I haven't seen the tail-less turtle in over two decades, so I hope he'd moved on before the significant disturbance the bridge replacement caused.

Here's Madella with the new bridge in the background. She was watching my girlfriend gather rocks for a jewelry display just last year. She was amused by us; but then, she usually was. More importantly, she never let me forget that there was magic in the Earth beneath our feet. Fossils! The chert underlying the area is a Paleozoic deathbed of sea animals that expired 354 to 290 million years ago when Oklahoma was actually south of the equator. 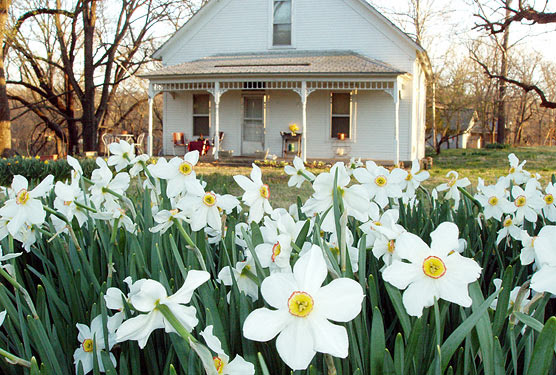 Everything dies, but there is also renewal. 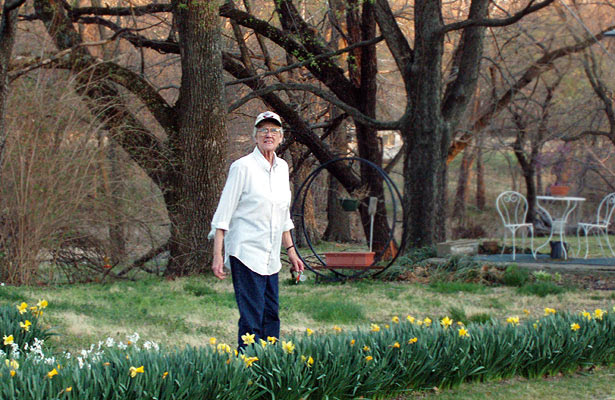 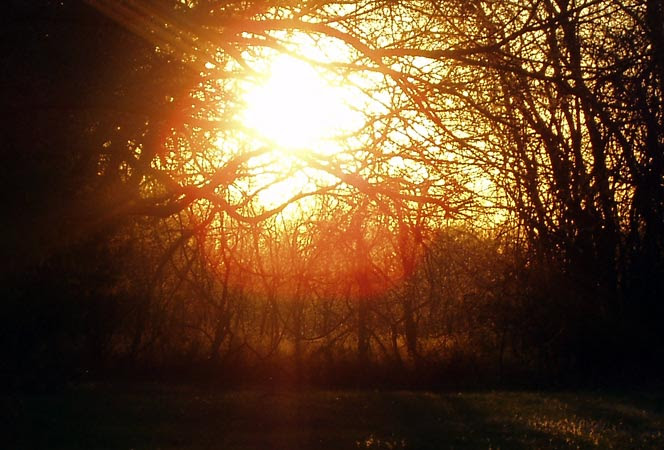 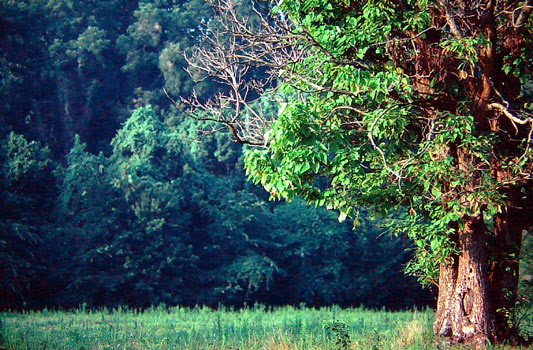 About the title of this post: Lord Dunsany (1878–1957) was a writer who believed that just beyond this mortal land, there is a realm of magic "beyond the fields we know."

Madella believed much the same thing. On some days - be those days wistful or wise I do not know - I believe they could not have been more right.

Bunny is very sorry to hear about your friend. Madella truly seems to be a wonderful person, with an appreciation for nature and for life.

I'm sure she would enjoy the beautiful photos of her land with which you have paid tribute to her.

Hoping that she found a flower-filled meadow for eternal rest and happiness.

The Topiary Cow is also very sorry to hear about your friend.

Cow hopes that the land will be entrusted to someone who will care for it and not pave it over or develop it.

Cow likes your blog very much, seldom does a humble Topiary find pictures of chert and turtles on the same site!

Cow is making sure to amend her blog to add attribution to THIS blog for the photo of bunny in jail.

Cow is sorry to have used the photo without attribution---it had been used earlier on Marshall Ramsey's blog and she borrowed it from there.

This post is beautiful. I actuall got goose-bumps! You have such a wonderful way of putting everything together just right. I'm sorry for your loss.