The Lope: The Lincoln Highway 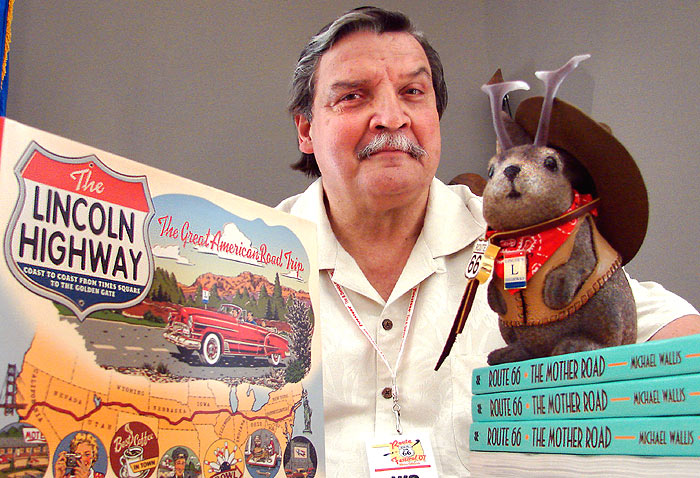 Michael Wallis looks pleasantly bemused as he poses for us. He's just come in from celebrity duties in the sweltering humidity of a too-wet Oklahoma summer at the 2007 National Route 66 Festival in Clinton, Oklahoma and the "roadie" subcultural guru will soon be receiving more fans at his desk. Wallis' credits are numerous and varied, but at this festival he wears two hats... 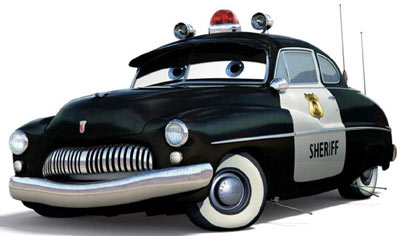 ) and more recently, as the voice of the Sheriff in Disney/Pixar's "Cars". Wallis' bailiwick in "Cars" is Radiator Springs, a fictional composite Route 66 town. (image from "Cars" is property of Disney/Pixar) 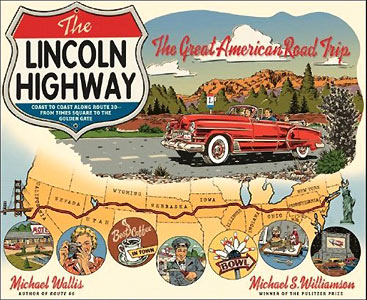 Eventually, Hollywood may cobble a Lincoln Highway version of Radiator Springs if Wallis' newest book (with photographer Michael S. Williamson), The Lincoln Highway: Coast to Coast from Times Square to the Golden Gate

is similarly catalytic to travel on "The Father Road."

Wallis' book lives up to the prose he is known for, and paints a seductive image of the first American coast-to-coast highway. It's written as a travelogue and emphasizes local color over maps and navigational details. As such, it's a record of how it feels to travel the highway, strewn with examples of the sorts of people, buildings and settings that make blue highway junkies need a fix.

Pulitzer winner Michael Williamson's photographs serve the book well, and the selection includes atmospheric environmental portraits of personalities along the highway, skillful architectural images hip to the tastes of the roadside attractions buff (i.e. muffler men) and photos of structures original to the period of the highway. Thus, it covers the post-Lincoln Highway relics of the various roads which had been linked under that name. 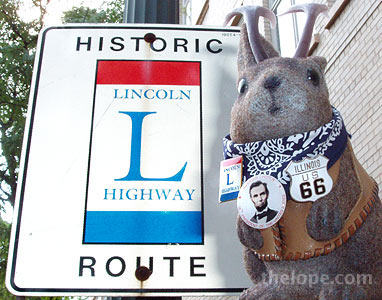 I must admit that I'd never heard of the Lincoln Highway before a year ago when I found out it crossed Route 66 in Joliet, Illinois, as I toured that city. Joliet is the only Lincoln Highway city (from the official route, that is) in which I've taken photos, so here are a few. 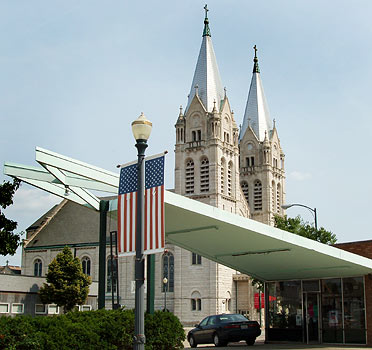 In addition to being the "city of spires" due to the high concentration of churches, Joliet has nice Americana along with roadside architecture, such as the portico on this gas station turned dry cleaners. 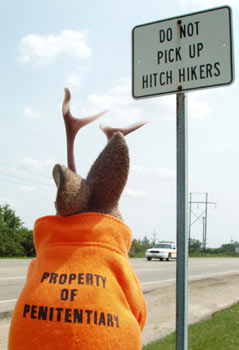 It also has a reputation as a prison city. Remember the Blues Brothers movie? The prison scenes were filmed here. 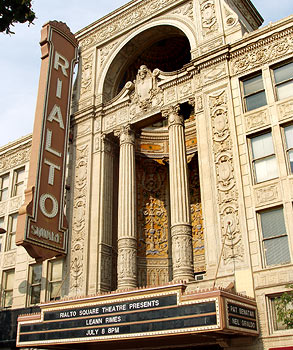 The jewel of the city is probably the Rialto Square Theatre, built in 1926. The theatre is on Route 66 and is less than a block from the Lincoln Highway.

And this brings up the inevitable comparison of The Lincoln Highway with Route 66. First off, back when the Lincoln Highway was formed in 1913, such highways were named, not numbered. This continued until the 1920's. Route 66, created in 1926, was always a numbered highway even though it carries other honorary and sentimental monikers such as the "Will Rogers Highway" (from a re-dedication in 1952) and the "Mother Road."

Route 66 is about 2,500 miles long (like the LH, more if you count all the changes) and is not a coast-to-coast highway. It runs through Illinois, Missouri, Kansas, Oklahoma, Texas, New Mexico, Arizona and California.

The Lincoln Highway lost its official status in 1928; Route 66 lasted much longer - all the way through the post-war car-crazy days - and finally gave its last official gasp in 1985. The longevity of 66 and its presence in living memory of so much of our population probably accounts for its momentum as more of as high profile nostalgia juggernaut. But the Lincoln Highway has its devotees and proponents, both organizational and touristic. We'll hear more about it, believe me.

The bottom line is that both roads have done an Obi Wan, and are alive and well long after their "demise."

Both also have an important pairing of factors - for me, anyway - to really inspire road trip. Two of Ace's rules of trip potential:

1. Enough published information to seduce and inspire and enough map data to plan a trip.

2. A large enough area, with a sufficient rate of change to leave me feeling that there's still something for me discover.

In other words, I have to know beforehand that things like the wigwam motels (Route 66) or The Lincoln Theatre (Lincoln Highway) exist so I can plan to see/eat/stay/photograph them when visible/open/vacant/neon-lit, etc. But there must also be sufficient growth and vitality that I can expect to run across surprises like a newly rejuvenated business or a restored sign.

It would still be nice to find a Lincoln Highway equivalent of Jerry McClanahan's very thorough and user-friendly Route 66: EZ66 Guide for Travelers

The publication of Wallis' book means we now have at least two good Coffee table/road trip planner books on the Lincoln Highway, by authors who are so cooperative with each other as to have contributed praise-filled blurbs for each other's book jackets. As a matter of fact, they're even on tour together in some cities. 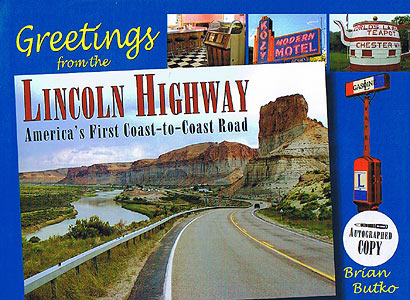 The other author is one of Ace's readers, Brian Butko, who published his own Lincoln Highway book in 2005: Greetings From The Lincoln Highway: America's First Coast-to Coast Road

Butko's book contains more history and fewer character portraits than does Wallis'. It does have the detailed state maps that I feel Wallis' book could benefit from.

I asked Butko to write a bit about the differences between Route 66 and the Lincoln Highway; he responded:

"You see a lot of America along both roads, from busy cities to small towns to lonely desert stretches, but since the Lincoln Highway goes coast-to-coast, you can experience more of how the country unfolds. Driving east to west, New York City and much of New Jersey is dense urban driving. Farms and industry mix across Pennsylvania, then the land opens up across Ohio, Indiana, and Illinois. Most early drivers thought the West began after Chicago, and it still seems like that's where you leave the cities behind. Iowa is filled with corn, but as you cross Nebraska, crops change and even livestock changes from dairy to beef cows. A dip down to Denver on the Colorado Loop is often along dusty farm roads, and back on the main route across Wyoming, the Rockies are crossed on high plains. After Salt Lake City, the original road skirts the Great Salt Lake and then the Salt Lake Desert on roads that never have been paved. Crossing Nevada is a constant up-and-down over mountain folds, and then the California border brings Lake Tahoe and the Sierra Nevadas. Mountains of pine trees are the first greenery in a long time, then its downhill into Sacramento and on to San Francisco."

You can see the course of the Lincoln Highway on the back of Butko's Book.

Here it is on the cover of Wallis' book. Notice that the Colorado loop is missing; thereby hangs a tale.

Wallis sticks with the official route of Lincoln Highway for his book, which does not include Colorado, whereas Butko includes an entire chapter detailing Colorado's involvement, which caused "so much regret, difficulty and trouble."

In 1913, the Lincoln Highway Association sought the straightest, most level path possible, and a path through Wyoming rather than Colorado was more logical and better for the cars of the day. So far, so good - but of course communities along several possible routes all wanted a piece of the commerce that such a highway would bring, and courted the LHA appropriately. Only the advocates for a Colorado loop of the highway were successful; and such a loop was announced in the Proclamation of the Lincoln Highway in 1913.

That didn't go over well with various by-passed towns, including some in Colorado which were left off the loop. It was immediately obvious that deviating from the straight and level had been a mistake - a mistake which was rectified by the Spring of 1915 when the first official Lincoln Highway guidebook omitted the Colorado loop.

Colorado was not happy about this, and a small billboard war ensued at the divergent point in Nebraska, with Colorado attempting to send cars southward onto the loop that wasn't. This was countered by a billboard pointing to the official route through Wyoming. 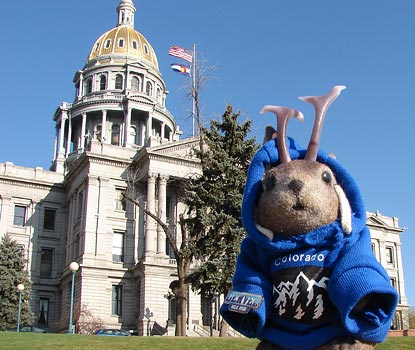 Denver may not have been part of the eventual official route, but I was there on business in March and just happen to have shot a few photos along the short-lived loop. 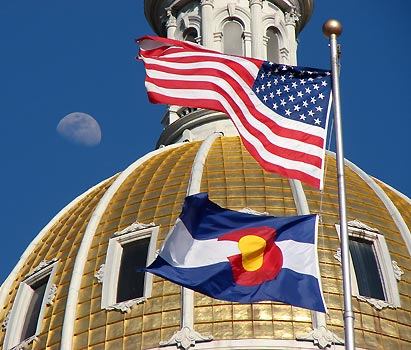 The Denver part of the defunct route through Colorado skirted the edge of the state capitol grounds on Colfax. 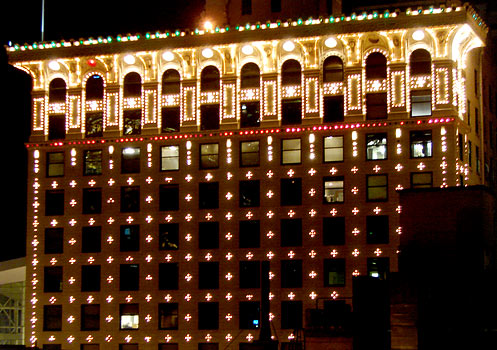 Then it headed northwest up 15th where is passed the Gas and Electric Building which was brand spankin' new, having been built in 1910, reportedly as a promotional tool. It still features its 13,000 electric light bulbs arrayed in geometric patterns. 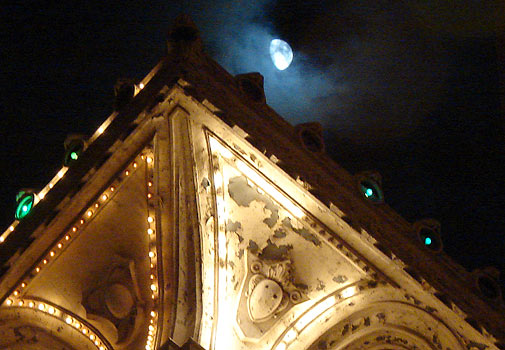 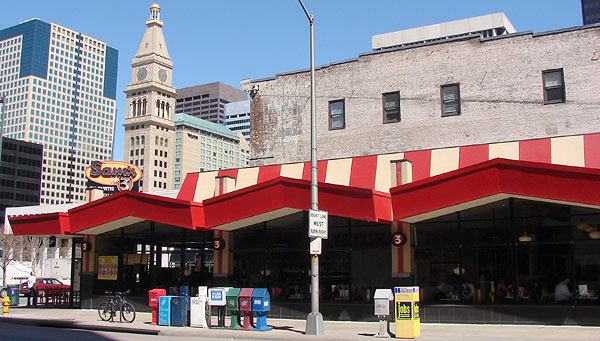 Modern travellers of the "loop that wasn't" can see a nice bit of Denver googie at Sam's No. 3, A former White Spot coffee shop at 15th and Curtis streets. It was designed by Armet and Davis, who virtually defined the mid-20th century "googie" genre of space-age architecture with their many Southern California coffee shop designs.

And back in the historical period of the Lincoln Highway, Denver's Union Station is just a block north of the route, and quite visible. It was built in 1914 - right in the middle of the Colorado loop controversy - to replace a previous structure which was no longer large enough to accommodate traffic and tourism Denver wanted even more of, via the Lincoln Highway.

I've seen bits of the highway in several other states, but would not have identified them as such, and that's part of the value of these two books: to help understand the context of what one is seeing. Which one should you buy? Since when do travel devotees keep only one book on a given topic?

Michael Wallis will be on tour promoting his book and attending Lincoln Highway events through early August. He will be joined by Brian Butko at some venues; I have noted those. There is a blog of the tour, here. Of course, you should always call and/or check the tour website before planning a road trip around such events: 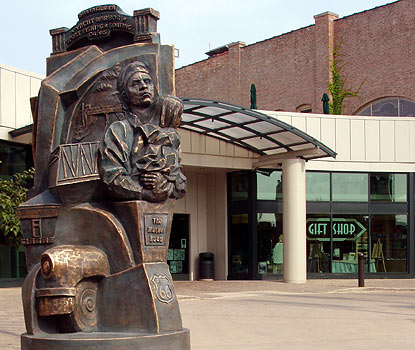 Today, Saturday, July 28, the book tour will be at the Joliet Area Historical Museum at 9 AM. This is very near an intersection of Route 66 with the Lincoln Highway. 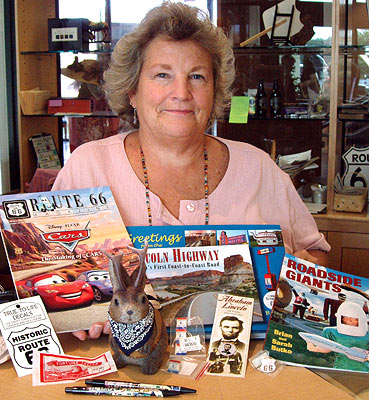 Brian Butko will also attend and will give a PowerPoint presentation. This is where I bought his book, along with all the other stuff pictured (except Ace.) 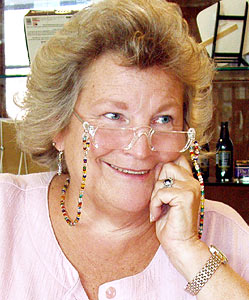 Here's the rest of the tour, starting with more appearances today:

Franklin Grove, Illinois
Franklin Grove Public Library, at 2 PM (Butko's schedule lists it as 1 PM)
223 N. Elm Street
Phone: 815-456-2823
This will be a Meet and Greet and book signing.
Brian Butko will do a PowerPoint presentation.

(Update, November 7, 2007: Brian Butko now has a Lincoln Highway News blog. Check it out for useful news and features about the road.)

Thanks for mentioning my blog, now at

It's a lot of work, which you already know, but tons of fun!!