The Lope: Walking in Distant Footprints 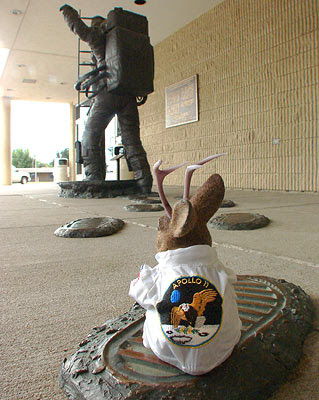 Today - in 1969 - kids got out their Apollo toys and play-enacted to the "beep...beep...beep" of NASA audio while history was beamed into their living rooms. 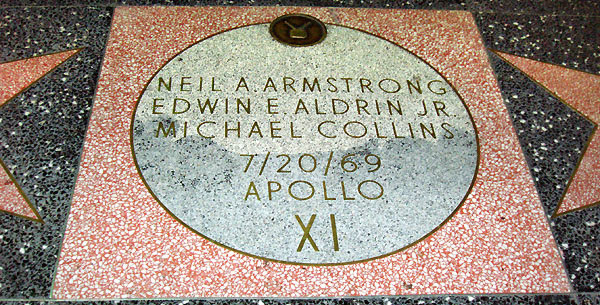 As commemorated in this plaque on the Hollywood Walk of Fame, commander Neil Armstrong, command module pilot Michael Collins and lunar module pilot
Edwin "Buzz" Aldrin successfully got Armstrong and Aldrin onto the lunar surface. Armstrong insists that he actually said "That's one small step for a man, one giant leap for mankind" and that the "a" was obscured in the recording. Others believe he simply flubbed it. Personally, I don't care; I was just happy to be allowed to stay up late and hear it on TV with the rest of the country. 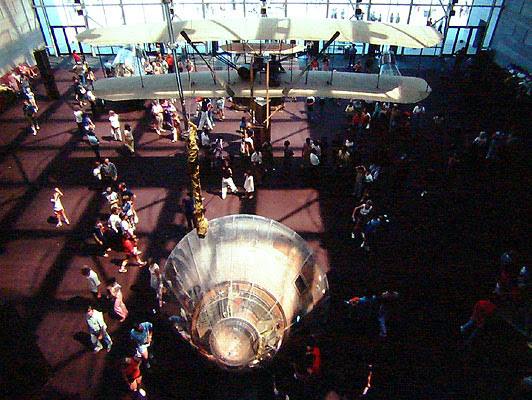 One of the fun things about being an adult baby-boomer is that you can visit the icons of your youth. I caught up to the Apollo 11 command module, Columbia in the Milestones of Flight gallery at the National Air and Space Museum at the Smithsonian in Washington DC, back in 1980. 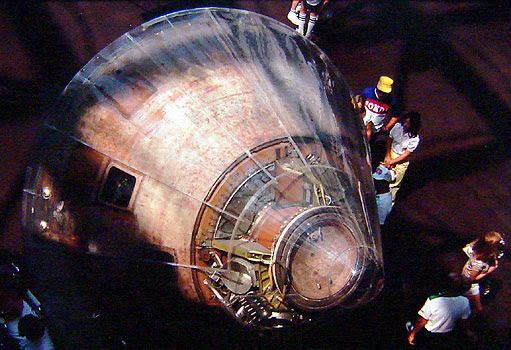 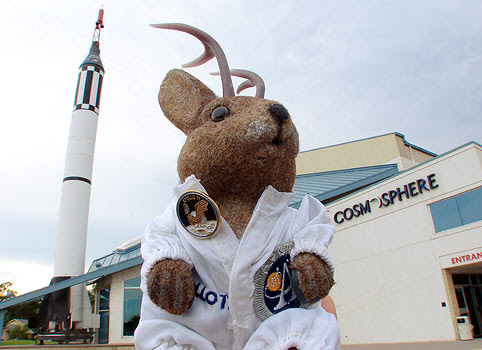 To commemorate the 38th anniversary of the first manned moon landing, we recently paid a visit to the Kansas Cosmosphere and Space Center in Hutchinson, KS. 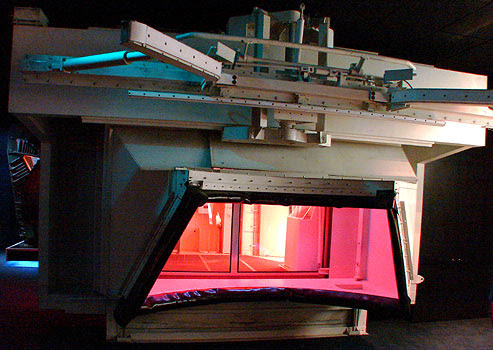 One of the Cosmosphere's artifacts is this "white room", from which the astronauts transitioned from the gantry to the command modules. 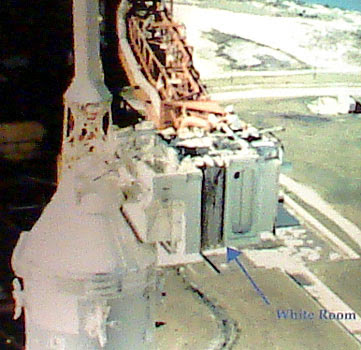 A helpful photo at the Cosmosphere shows how it worked, 320 feet above the ground. 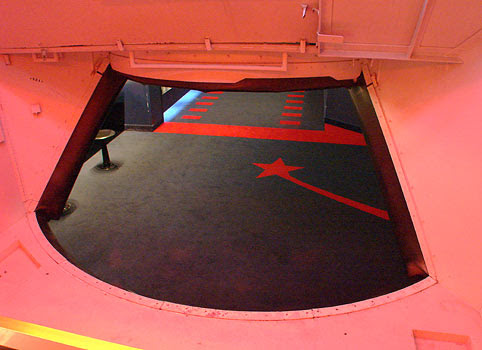 Visitors are allowed inside, and your "inner eight-year-old" can imagine the curved hatch of a command module instead of the view of the floor. This is one of three white rooms, and there is no available record of which rooms were used on which missions, but according to the signage here, this one would have been used for about 1/3 of the Apollo missions.

Outside the white room is this actual console from one of the two original mission control rooms in Houston. This particular one was used by the flight surgeon to monitor astronaut physiological signs on the Mercury, Gemini and Apollo programs. 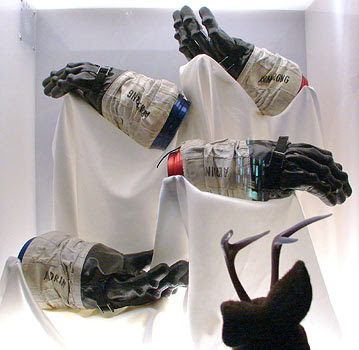 The Cosmosphere has some artifacts specific to Apollo 11, like these neoprene gloves, used by Aldrin and Armstrong on the mission. They were worn during their moon walk, but with an outer protective glove. I believe that the Cosmosphere also has at least one of the parachutes that brought the command module to splashdown, but they are not on display in the museum. 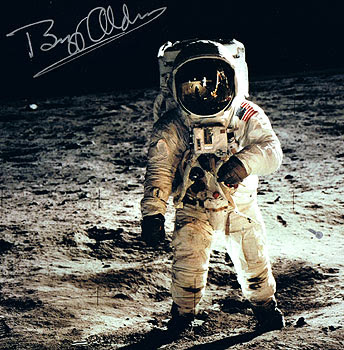 A few years ago, it was my pleasure to meet Buzz Aldrin. If my memory serves correctly, he mentioned he was actually urinating in his suit in this photo. The Cosmosphere has a nice display of astronaut...uh...waste management stuff. 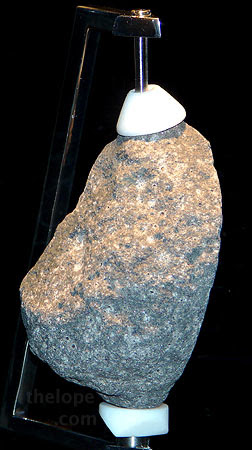 The Cosmosphere also has a moon rock collected by Apollo 11.


As to the records of that historic moon walk, I recently learned that many of the original higher-resolution tapes of the Apollo missions have been misplaced. To me, the centerpiece of the Cosmosphere's Apollo collection is this Lunar Module. It was built as an engineering test model by Grumman, the company that made the Lunar Modules used on the missions, and was restored by the Cosmosphere using many flight-ready parts. I miss the days when it was displayed in the round, in a previous museum configuration. 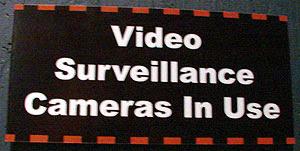 It does occasionally cross my mind that while I'm shooting pictures with Ace, security folks are watching. 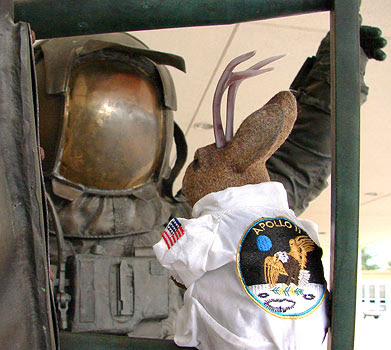 Outside the building, Ace pays tribute to this statue of astronaut Eugene "Gene" Cernan, seen also in the top photo of this post. Cernan was actually the last man to walk on the moon, on the Apollo 17 mission in 1972. 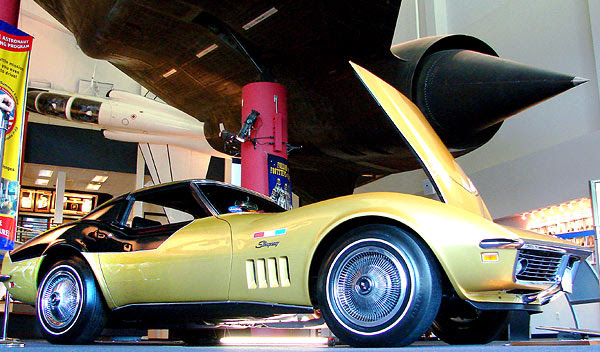 I'm no car enthusiast, but reader email suggests that lots of you are. So, I should mention that the Cosmosphere currently has Apollo 12 astronaut Alan Bean's gold and black special edition 1969 Corvette Stingray on exhibit. Bean never actually owned the car; three such 'vettes were leased for $1 a year to he and the other two Apollo 12 astronauts. In the early 1970's, the cars were returned to Houston dealer Jim Rathmann, and were sold. Collector Danny Reed bought this one; signs at the Cosmosphere state that the whereabouts of the other two are unknown.

The "LMP" on the custom decal stood for Lunar Module Pilot, Bean's position. Each astronaut had a color and Bean's was blue, hence the placement. What times we have seen.

that is really interesting about the *lost* footage - i got really caught up a few years ago in the 'conspiracy theory' that the moon walk never occured - that was interesting !

Alan Bean grew up in Fort Worth, Texas. My mother bought a house in the same neighborhood where Alan grew up. The lady that sold us our house told my mother that the famous astronaut used to do her yard work. He had planted all of the grass in the yard and mowed it. I tought it was pretty cool that an astronaut that had walked on the moon had walked in my backyard!