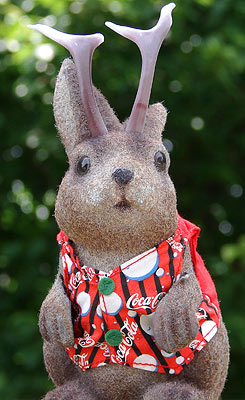 I was interviewed yesterday by Scott Leith of the Atlanta Journal-Constitution newspaper about user-generated content on sites such as CNN.com. I'm the Kansas photographer they mention near the bottom of the article, concerning the Greensburg photos.

I've never been to Atlanta, but I understand Coca Cola is an important part of its history. I remember this every time I see a rerun of that Futurama episode in which they visit the lost underwater city of Atlanta in which people have evolved into mermaids and mermen, the evolutionary change having been accelerated by the caffeine the water. I'm sure the Atlanta tourism commission would rather the city come to mind another way, but I say "whatever works."

I thought it particularly neat that the Futurama episode worked in the Donovan song "Atlantis" with reworked lyrics. The original song uses the term "antediluvian", meaning "before the (biblical) flood", which I always got a kick out of seeing applied to dinosaurs in Victorian science journals (and shudder at seeing applied to them by creationists).

Sorry to digress - I hear Atlanta is, in reality, a nice place...and far from being underwater, is probably a darn sight dryer than Kansas of late. I'll have to go there; and Ace already has the wardrobe. Here's the article.

I dunno. You always seemed to me an antediluvian type of blogger. Hehe, I think it works as a generic, meaningless, big-word adjective used to make one feel smarter.