The Lope: Of Late 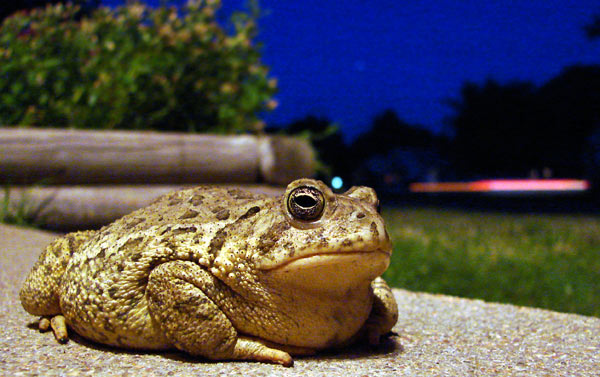 My friend Patsy has a guard toad. I was checking on her house while she was out of town earlier this month and found her amphibian watch-critter. 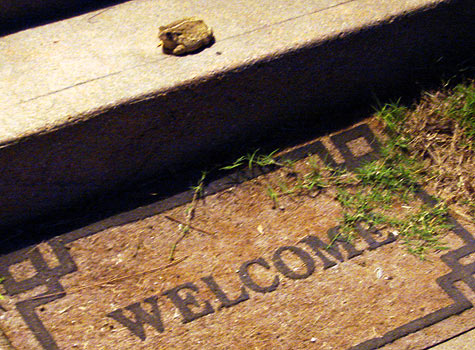 Here he/she is in context, on her porch step.

I've been zipping back and forth between KS and MO of late, and on the first of this month I stopped at the rest stop on Hwy 400 near Beaumont KS to watch the sun play across the Elk River Wind Farm with the storm clouds that seem ever present of late.

See the cows? They give the 100-unit wind farm a bit of scale. The windmills are 389 feet tall at the top of the highest blade position. The farm takes up 7,907 acres, which are owned by five local landowners. The land is tall grass prairie and is used to graze cattle. The fact of the wind farm's placement on this prairie gave rise to some controversy. 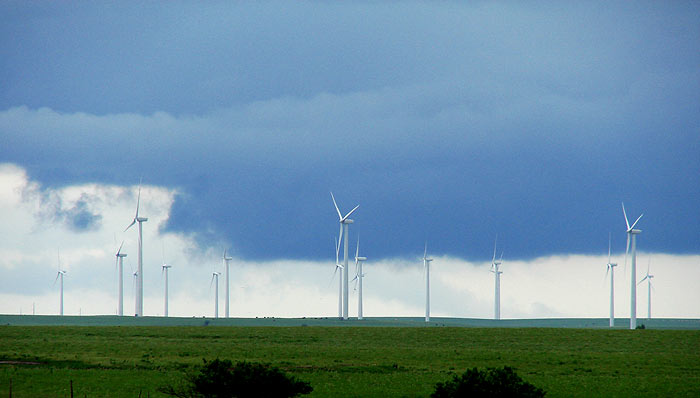 I've been looking into investments in wind power of late, though a speaker at a recent energy conference in Tulsa told me there are seldom opportunities for the small investor in such projects. This particular wind farm was finished in late 2005 by Elk River Wind Farm LLC of Larkspur, CA, HMH Energy Resources of Larkspur, CA, and Greenlight Energy, Inc. of Charlottesville, VA. It was then sold to PPM Energy, Inc. of Portland, OR, who signed a 20-year deal to sell 150 megawatts of electricity to Empire District Electric Company of Joplin, MO. Empire estimates it can meet the annual electricity needs of about 42,000 homes with the purchase.

A few nights later I sought refuge from one of Kansas' occasional freakish straight wind storms at the same rest stop. I slept for a while in the car as it was rocked by frequent 45mph gusts with a few that that were stronger than that thrown in, just for variety. During a calmer period, I tried to get a photo that would show the degree of wind. 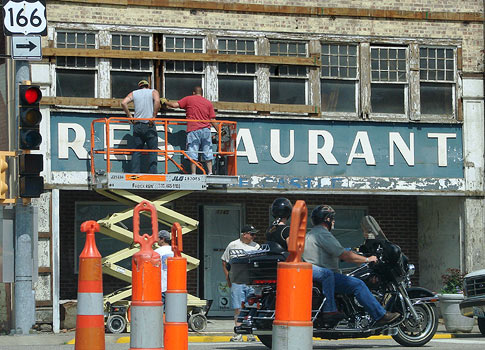 On Saturday the 9th of June, I took a little drive on the Kansas stretch of Route 66. Work was taking place on a building on the NW corner of Highways 166 and 69 (Rt66) in Baxter Springs.

While driving north on RT66 from Baxter Springs, I ran across a parade for Riverton Kansas' 9th annual Route 66 Celebration. The parade ran the entire course of Route 66 in Kansas, which is about 13 miles. 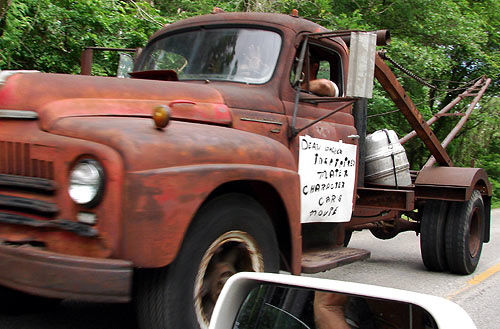 I passed the tow truck that helped inspire the Disney/Pixar "Cars" character of "Mater." 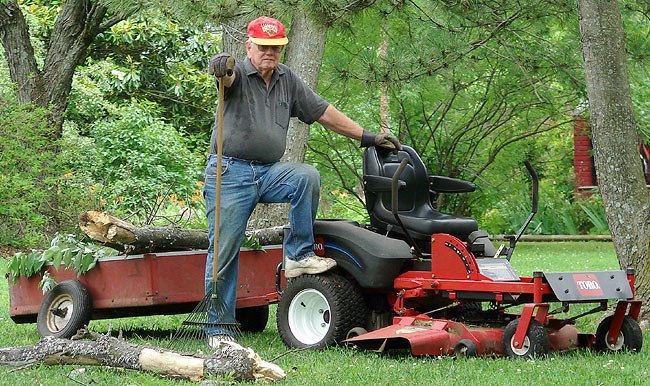 I turned around and decided to follow the parade. As cool as it was, I found the watchers more interesting. It reminded me of seeing people from a train. This gentleman is north of Baxter Springs. 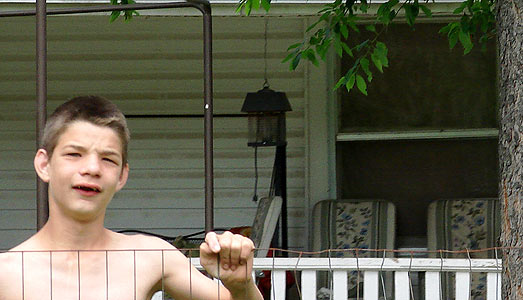 This young man watched from his yard in the north part of Baxter Springs. 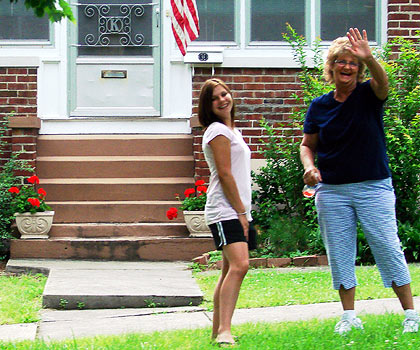 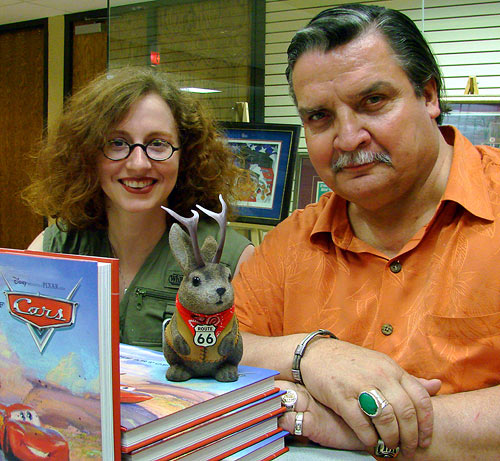 The Grand Marshall of the parade was author Michael Wallis, whom I found later in Riverton. I'd wanted to meet him for some time, so I was happy to get his photo with Ace Jackalope. I was doubly pleased to see fellow blogger and enthusiast of many cool things, Emily, aka Red Fork Hippie Chick in his company. 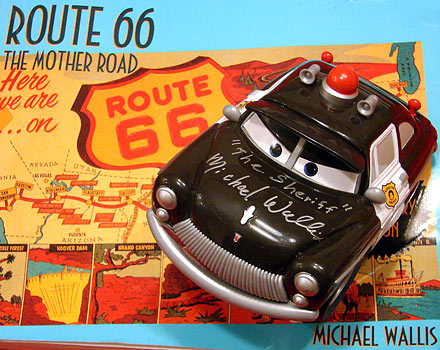 Mr. Wallis was kind enough to sign a toy Sheriff car for me; he voiced the character for "Cars" and also served as consultant for the movie. The sheriff patrols atop my well-worn copy of his book "Route 66 - The Mother Road." I still look through that book before beginning any Route 66 trip of significant size. Wallis will attend the annual Route 66 Festival in Clinton Oklahoma, June 21-24. 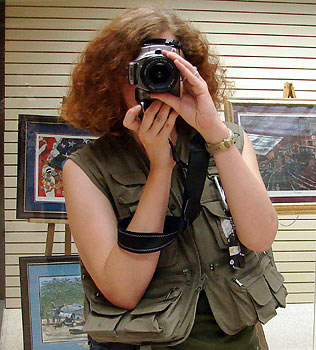 Emily thought it'd be fun to do the classic "you shoot me, I shoot you" thing. She was right. See her version in this blog entry here...pretty neat stuff, marred only by the inclusion of a camera-wielding dweeb, albeit in a cool shirt. 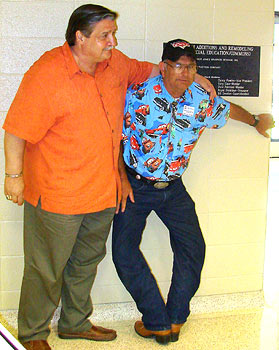 Dean "Crazy Legs" Walker was also in attendance. Here, Wallis helps Walker attain the weird foot posture that he'd shown me last year at the "Cars" premier at the 66 Drive-In Theatre in Carthage, MO. Walker is credited as being an inspiration for the "Cars" character, Mater. 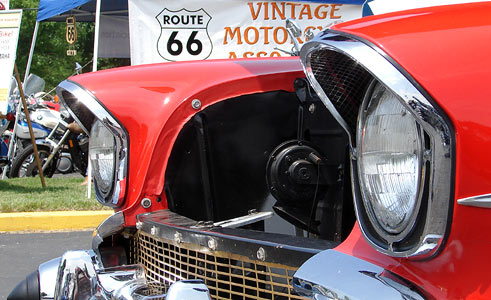 I was reminded, just as I had been a weekend prior in Rolla, that cars used to look cooler. 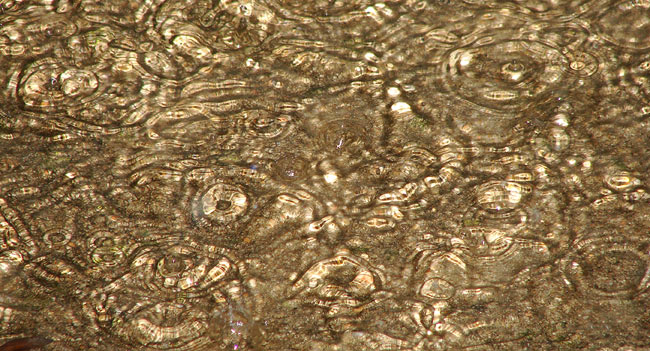 It rained rather much in Joplin on the 12th of June. Here's what happens when you use flash on a shallow puddle on a sidewalk. If one colored this in photoshop, it'd make a nice 60's acid rock background. 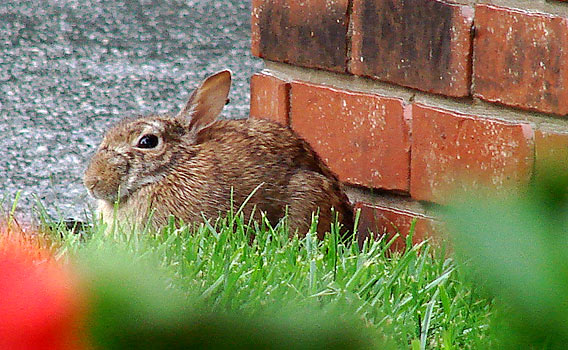 A bunny finds partial shelter from the rain by a mailbox. 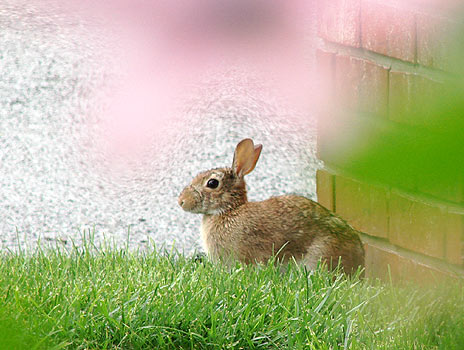 After the rain, the bunny changes it's posture and "de-puffs", as it were.

Tuesday night my lovely significant other and I had to drive to Kansas City from Joplin. By that evening, rain had caused flooding in SW MO. This is Hwy 126, west of where it intersects Hwy 71 south of Lamar in SW MO on Tuesday evening, June 12. 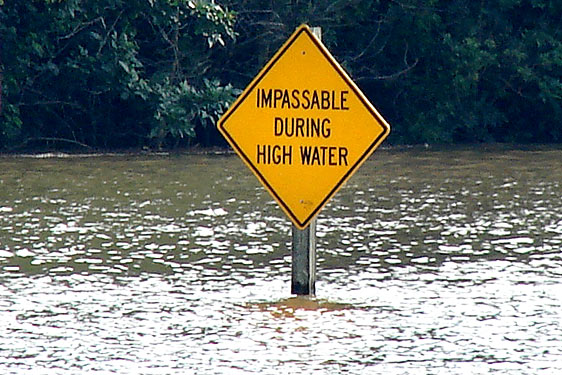 I've been accused of late of being a harbinger of floods. 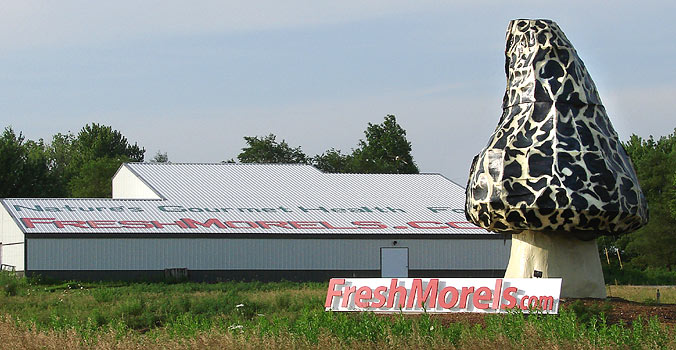 Giant things are cool; one should always photograph them. I'd seen the Freshmorels.com giant fungus before, but had never been able to stop for it. It's near Nevada, MO on the east side of Hwy 71. 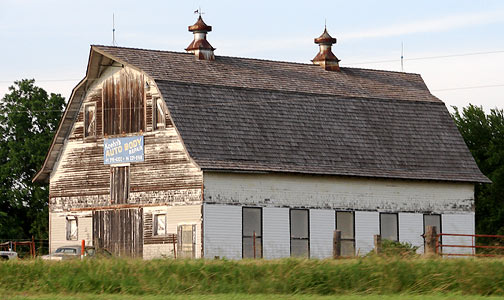 I had a long conversation with Patsy Terrell about barns recently. She'd returned from a trip to her native Kentucky with a renewed interest in photographing vintage ones, and got me thinking I should do the same before more of them are made of metal or gone altogether. This one has a sign advertising Koehn's Auto Body Repair in Rich Hill, MO, and was on the east side of Hwy 71 near that town. 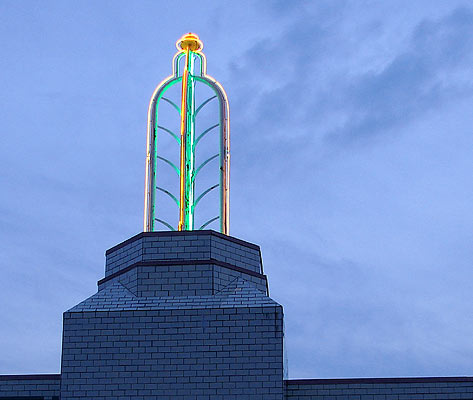 Winstead's is a Kansas City fast-food chain, and its trademark architecture includes this spire.

Wind power is ruining countless landscapes and needs to stop being seen as "green." There are at least 45,000 turbines in the U.S. as of this writing and 250,000 worldwide. It's the biggest onslaught on the visual landscape this century, more so than oil and gas rigs due to the sheer size and spread of the turbines on lands that were never slated for such construction.