The Lope: Greensburg "After" - Highway 54 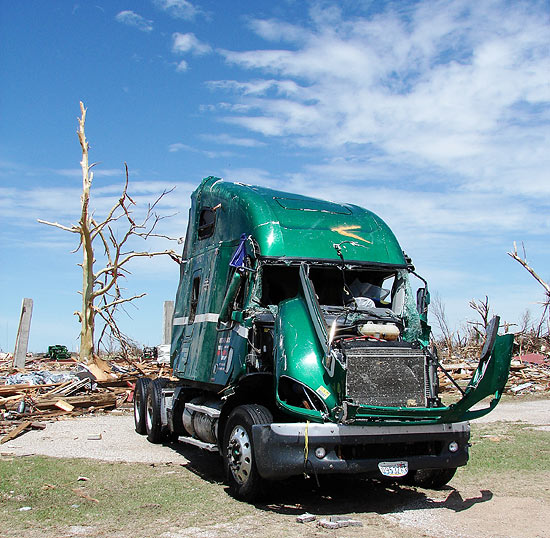 The pretty green truck reminded me of a wounded June Bug - its dislocated fender a wing shield askew. Though the drivers were no longer present, a reporter with whom I was working, Charlie Morasch of Land Line Magazine, was able to get the truck's story:

First the cab rocked to the left, then to the right. It rocked the green Freightliner so hard Donna Price thought the wheels were being ripped off.
"Here we go," Donna told husband Larry as the truck and loaded trailer lurched one way. "Oh God help us," she cried out as it lifted into the air.
The tornado’s 205-mph winds carried the truck across four lanes of U.S. 54 and slammed it on its driver’s side.
An instant later, the truck went airborne again and dropped on the passenger side, wind shattering the glass.
"Larry, are you OK?" Donna called. Her heart skipped a beat during a brief silence.
"Are you OK, Donna?" Larry called out.

- from an interview with Larry and Donna Price, conducted by Charlie Morasch for Land Line Magazine, for which I took the photos on this post. It is by their permission that I release them here.

Here's the Price's trailer; the tractor seen in the top photo had been righted by the time we came across it on May 8; the tornado was the night of May 4.

I'm running this post in response to the number of people - truckers, mostly - who have expressed an interest in seeing more Greensburg photos since the publication of the June 1 Land Line magazine. I hope it answers a few questions.

I've already shown four sites along this route - Dillon's, an old Sinclair station, Cowboy Supply Company and a western town - in Greensburg Before and After. Highway 54 is also Highway 400 through Greensburg, and the local street name is Kansas Avenue. Names change slowly in these parts and the common name of the street is "54" rather than the relative newcomer, Highway 400.

This was the first structure we saw as we entered Greensburg from the east on Hwy 54 on May 8. It looks as if the roof had collapsed and was held up only by the merchandise in the building. You can see what looks like a side entrance alcove, which looks pretty much intact.

I hope there is a study by engineers of the damaged buildings in Greensburg. A shelter or basement is best of course, but what of those structures which had no basements and were only partially destroyed? What parts of those survived best? 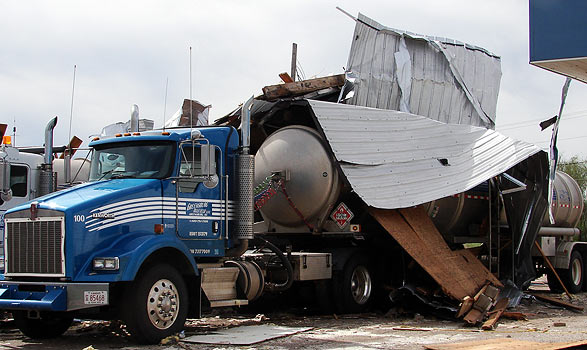 These three trucks were on the south side of 54, on the eastern edge of town. 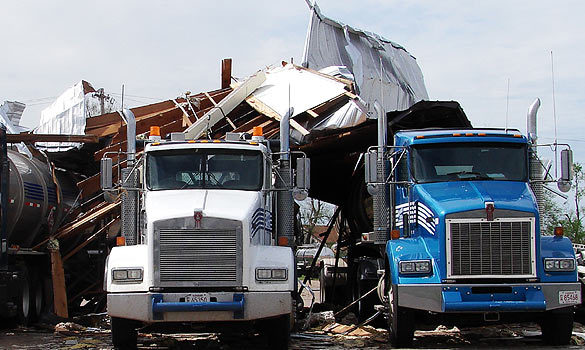 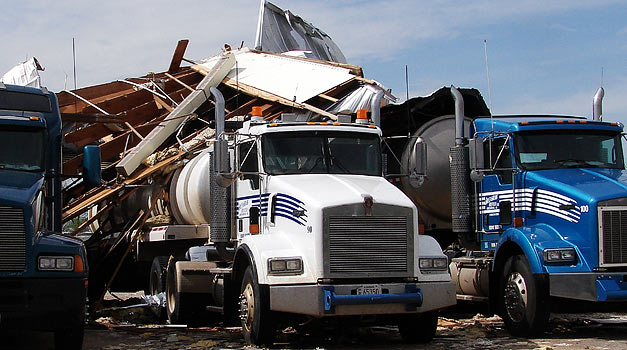 This car and truck wash didn't look too damaged.

This is one of several buildings along hwy 54 on the east side of Greensburg that looked like old gas stations. It is on the south side of Hwy 54. Notice the poles are all bent the same way - to the west. It would be interesting to make a map of Greensburg, noting the directions of such bending, and compare it to what one might expect from the Coriolis effect, which partially explains the motion of tornadoes. I've always been a little too physics-dense to properly understand the Coriolis effect, but it largely explains why most tornadoes in the northern hemisphere spin counter-clockwise. I might expect poles on the opposite side of the path of the tornado to be bent the other way, but then, I'm some guy with a blog, and not a physicist.

This is another building, similar to the one above.

This structure was on the north side of 54, on the east side of town, but near Main Street.

I've little idea what this building on the NE corner of Main Street and Hwy 54 was, but State Farm set up a mobile claim office in front of it. 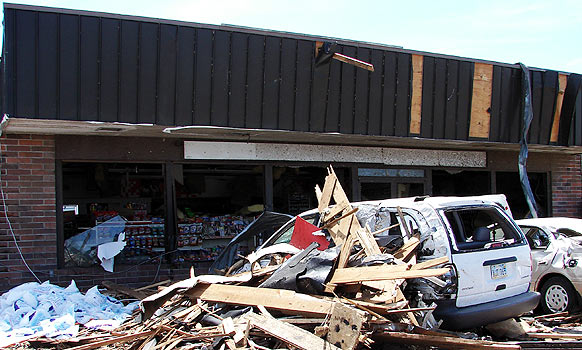 Moving on to the west side of town on Hwy 54, this is the Kwik Shop mentioned in Greensburg Before and After. It looks as if something has been embedded in the structure at the top center. 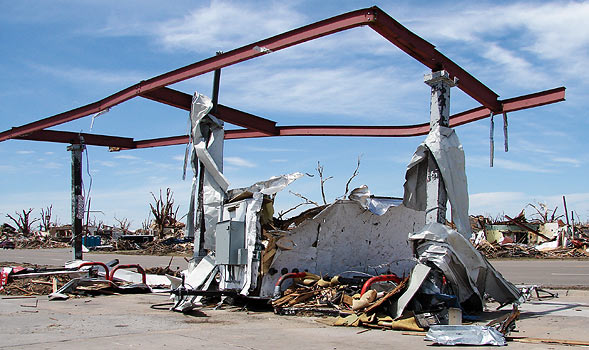 The tornado left a lot of skeletal support structures like this Kwik Shop canopy.

This is the remains of Coastal Mart. In contrast to Kwik Shop, the building was pretty much gone. I have found this Coastal Mart to be listed as a truck stop in several directories, so I think it might be the one a commenter on one of my other Greensburg posts was asking about. It's in the 400 block, west of Main Street, on the north side. There was also a Conoco nearby, which is listed as a truck stop in some directories.


Here are some more scenes from west Highway 54 in Greensburg: 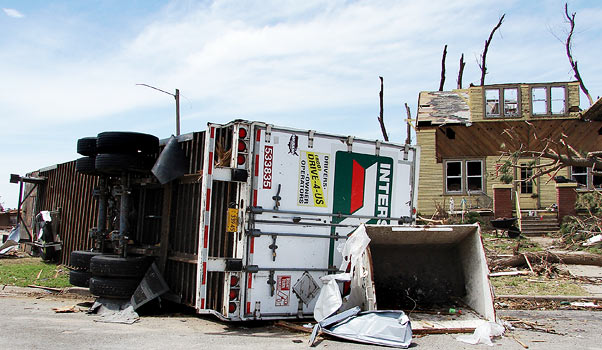 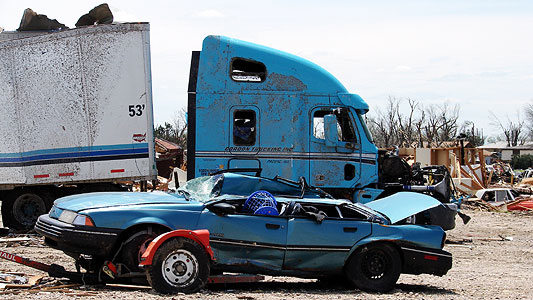 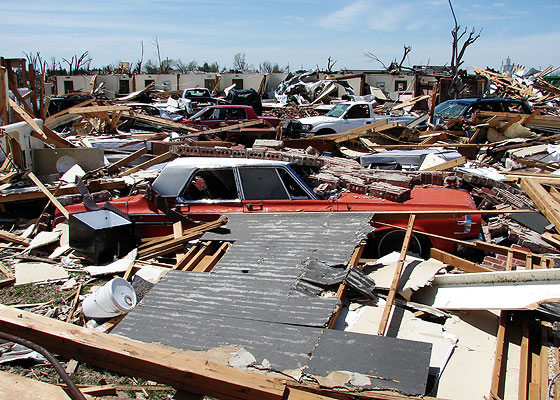 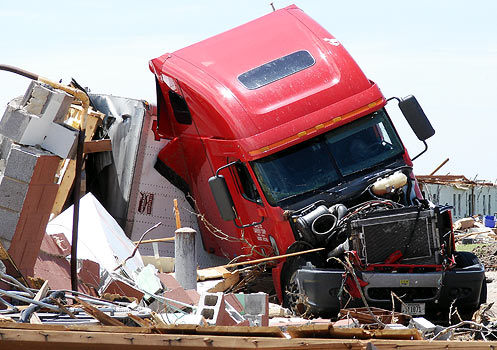 This truck, as well as the Price's, was found in about the west 700 block of Hwy 54 on the north side. 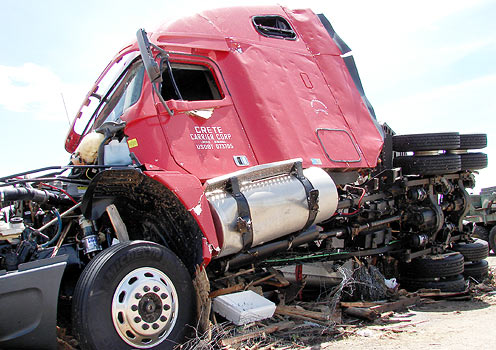 Yet another ill-fated truck 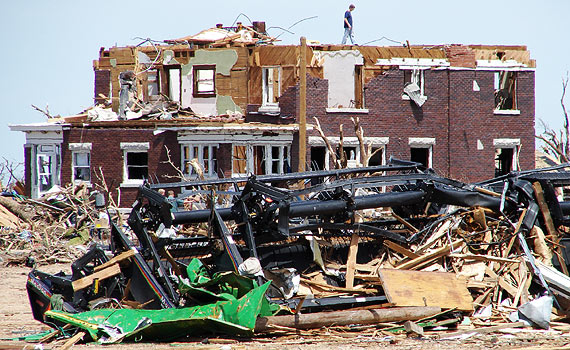 This was across the street from the parked trucks.

This is as far west as we went; I am told the damage did not extend much farther. 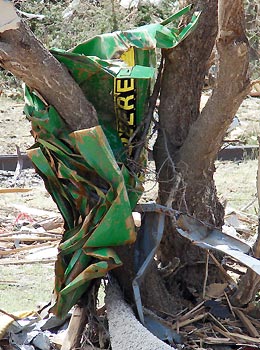 There were tell-tale scraps of John Deere Green found far from the sales lot, but I don't know if they originated there. This one was a few blocks north

Some scenes along Highway 54 in Greensburg were used in a televised interview CNN conducted with me. See it here.
See also my CNN I-report, here.

I appreciate the truck pics. The truckstop that I remember was on the South side of the road and was located on a corner of another street. Parking was on the West side of that street the store on the East side.It had a small deli in it and a couple of tables to sit down and eat a sandwich at. I remember walking across that street in the morning after spending the night there and noticing how wide the streets were in that town. I believe it to be a Coastal, and I saw on a video on YouTube that the place was demolished. I would be interested in hearing more trucker survivor stories and I will look into the LandLine magazine to see if I can find some there. Thank you. The pictures are quite amazing.

That truck stop has had several names over the years, it was built as a stop n shop, then it was a coastal mart, but the name at the time of the tornado was flying J, and it was on the SouthEast corner of Hwy 54 and Bay street.