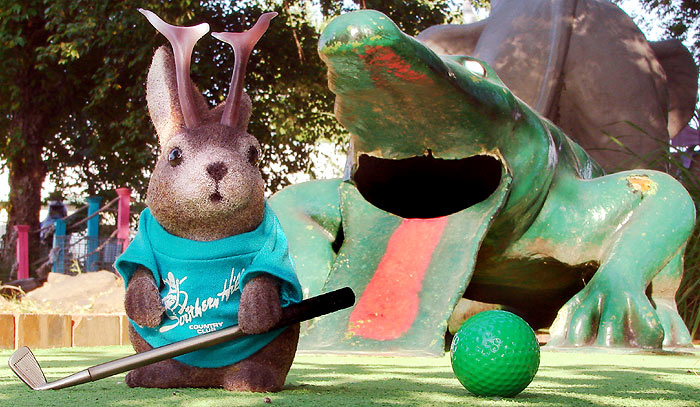 Southern Hills Country Club in Tulsa, Oklahoma, is the site of this year's PGA Championship. As Ace just happened to have a shirt for Southern Hills, we decided to go golfing this weekend. 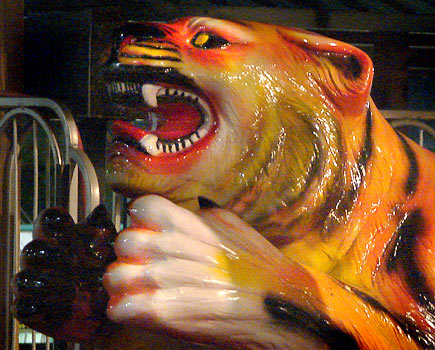 We won't see Tiger Woods where we're going. The only tiger is on the front of a kiddie coaster.

No posh and wussy links for us; we like a little peril with our golf. 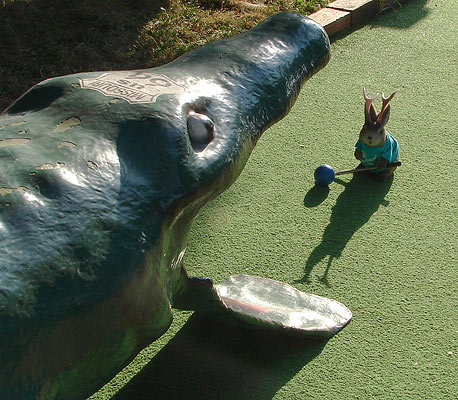 No caddies or golf carts either. This is real man's golf - the kind where you have to face 'gators. To satisfy the primal urge for miniature golf this particular weekend, we chose Carousel Park on Route 66 (West 7th Street) just outside the western city limits of Joplin, Missouri. It's just as well, 'cause I'm not entirely sure I could get into a country club, even with Ace.

Of course, we don't need no stinkin' country club when we can visit one of my favorite mass-manufactured mini-golf obstacles: the play-through alligator. I don't know who made these or what they were called. I'm pretty sure they've been around since at least 1970 and that there are knock-off versions.

It lacks the satisfying sound of metal obstacles, but it's always nice to see the ball come out the tail. 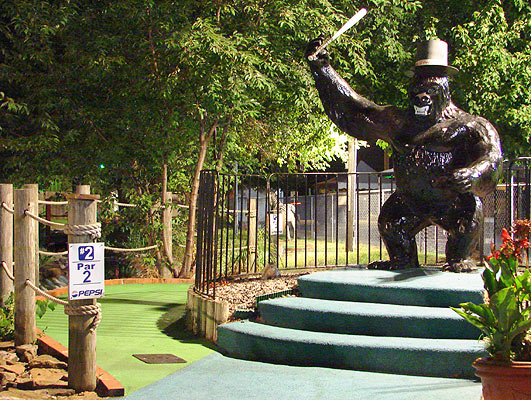 There are a number of fiberglass animals on this course. A manager told me that many came from a defunct course in Tulsa along Admiral. Most are decorative and not obstacles though.

Tiger Woods may be the uber-golfer, but lets see him putt a hole-in-one into the dreaded volcano hole. 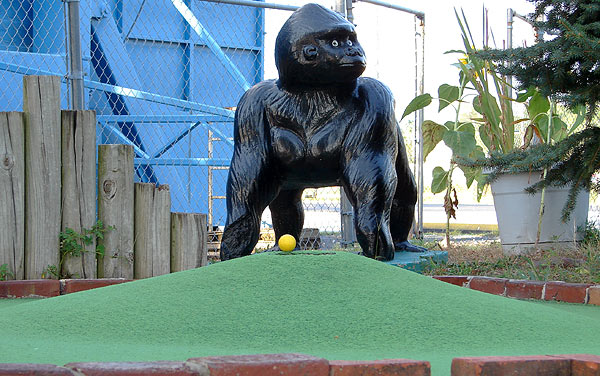 This particular hole has destroyed my under-par score a number of times. 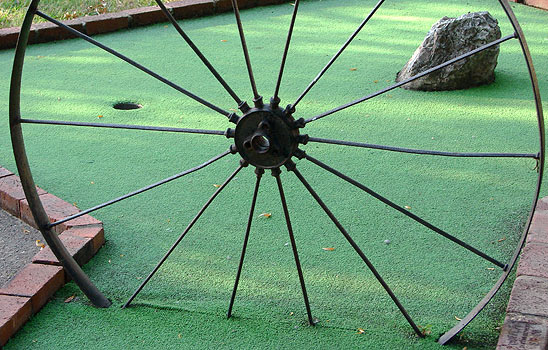 This course is quite old - 1960's at least - and has had a few names, a few owners, a period of neglect and subsequent extensive remodeling. The semi-difficult wheel hole is original, I'm pretty sure. 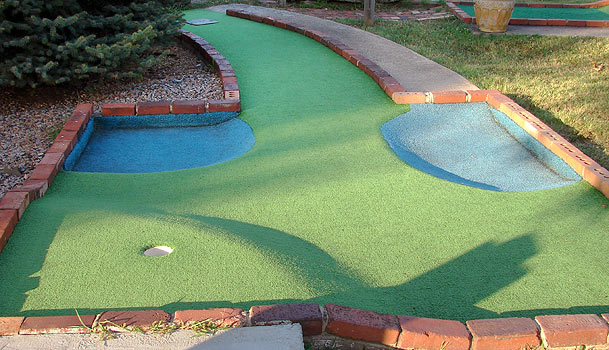 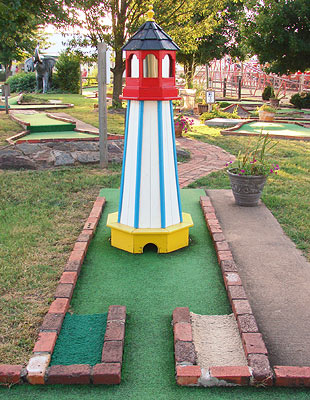 I'm an old fashioned guy. If it ain't got a lighthouse or a windmill, it ain't a miniature golf course. 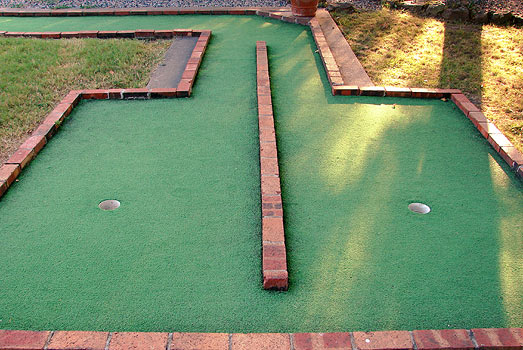 One of my favorite Simpsons lines is from a miniature golf episode. Bart to Lisa: "you've actually found a practical use for geometry!" 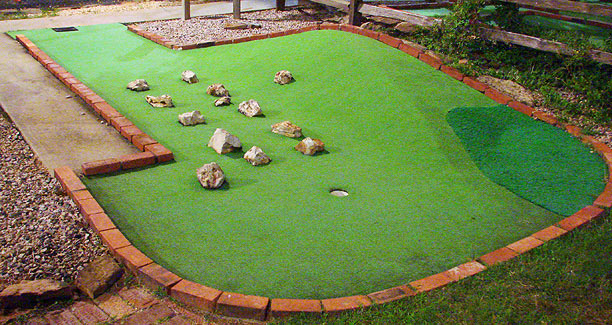 A previous incarnation of this course had a slight mining theme; this may be a vestige of that. 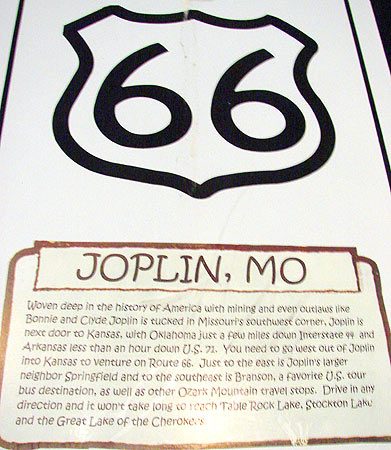 Before "Carousel Park," this course was "Route 66 Carousel Park." There's Route 66 signage on one of the two courses; It looks and reads like artist Bob Waldmire's work. 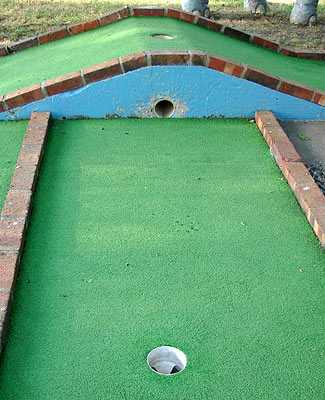 This is one of the few virtually unaltered holdovers from the oldest version of this course. When I was a kid, the place was called "Above Par" miniature golf. It was the not-as-favored competitor to H&L miniature golf a few blocks south on 13th street. However, H&L is long gone. 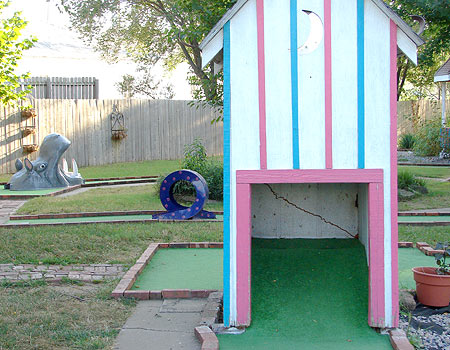 The two-holer outhouse is a classic, even if this particular one is not all that old. 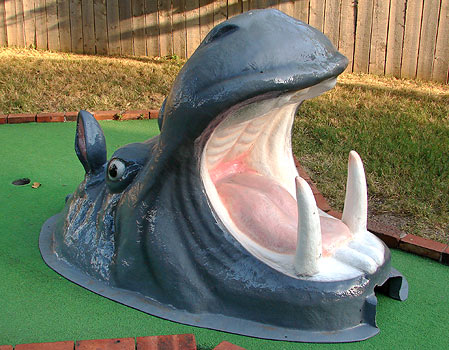 I've never been fond of these heads; they mess with my tendency to rationalize how something could really work. At least it's actually an obstacle. 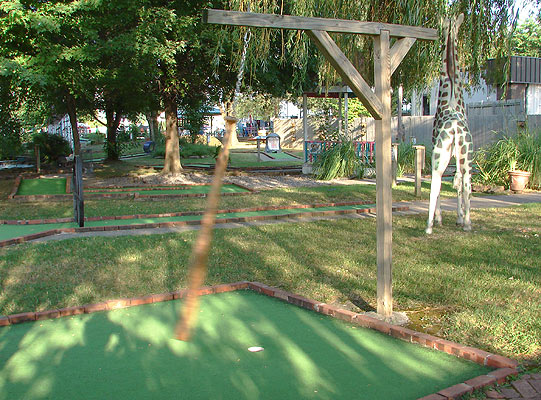 All the steroids in the world won't help you pitch a no-hitter against this swinging bat over the hole.

I ran photos of a metal loop at Route 66 Miniature Golf in Clinton, Oklahoma back in June. Here's a short movie of the one (identical except for paint) at Carousel Park in Joplin. Park Manager Monica Burlingame helped me out by pitching a few to illustrate the sound it makes.

And again...I love these things.

I'd sure like to know how many vintage (let's say over 30 years old) miniature golf courses there are on Route 66...anyone care to comment and we can start a list? I know of this one and of Route 66 Miniature Golf in Clinton, OK.

Par-King Skill Golf (Lincolnshire, IL) - near Chicago - so might be Rt 66
http://www.agilitynut.com/minigolf/il.html

I'd love to hear about any others!

Bunny is scared of the alligator. Not to mention the obscene jesters.

Bunny likes golf too, and hopes someday to meet Ace Jackalope in the Masters.

Once she gets a little better at her swing.