The Lope: Three Meals in Kansas

Sometimes, you must drive across the vastness to experience diversity in dining. This is a road that is called, somewhat absurdly, NE 150th Street between Newton and Cassoday, KS. You can see for miles. This is what people who don't know the state think the whole place looks like. It's not that long a stretch by Kansan standards - only 45 minutes (yes, we use time for distance) - but it does plays tricks on me as it is so flat in places that a sense of motion is given only by the passing fence posts.


But it is beautiful out here. This is the flat brown and green plane from which Clark Kent leapt into blue superness, and you can see why - the sky is a god of wonderment and joy, and you want to leap into his arms. 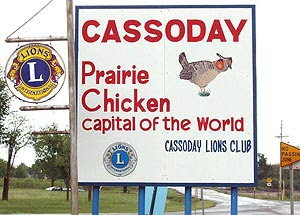 Planted in the middle of this, near the Kansas Turnpike, is Cassoday, population, 95. The town has taken the title, "Prairie Chicken Capital of the World." Alas, the prairie chicken, a relative of the ring-necked pheasant, is hard to find near Cassoday these days.

This is ranch land, largely. According to the Kansas State Library, cattle are brought to Cassoday from all over the country to "go to grass" using the grasslands of the Flint Hills. 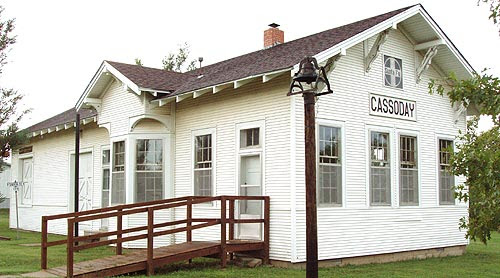 This well-preserved station is a relic of the Santa Fe railroad, which came to Cassoday in 1906 and helped drive the cattle business. The building is now used as the Cassoday Historical Museum.

Trucks do most of the hauling now, but the Burlington Northern Santa Fe still rumbles through the city. This is scenic Kansas highway 177, north of Cassoday and south of Matfield Green.

Cassoday is a town of wide dirt streets and wooden-porched buildings. The only sign that suburbia even exists is the steady stream of Wal-Mart trucks that stops at the Cassoday cafe. In fact, one reason for the the cafe's popularity is that a Wal-Mart driver "discovered" it and passed the info on to his friends. 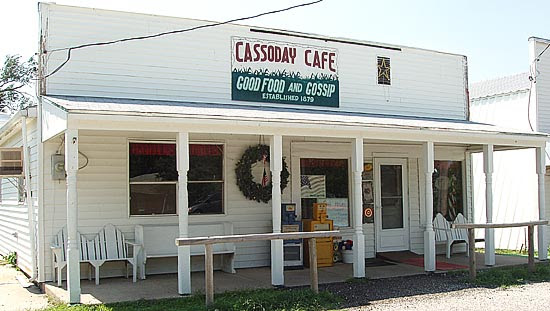 The focus of business in Cassoday is the Cassoday Cafe. The right half of the building dates from 1879 and, according to present owner Dianna Carlson, has always been a cafe of some sort. The left half is a "new" 30 years old. 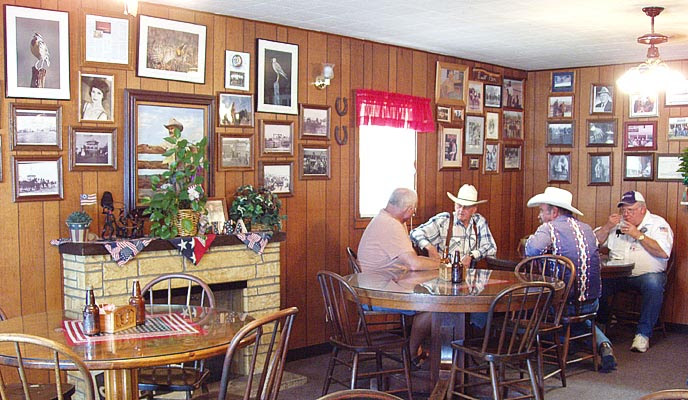 The interior is unpresumptuous and well-suited to the cafe's clientele - mostly locals, truck drivers, real cowboys and bikers. Above the mantle you'll see pictures of the much-vaunted but seldom seen prairie chicken, along with an autographed still of actress Janine Turner, who appeared in "Stolen Women, Captured Hearts", a movie filmed near here. The cafe has become a biker's haven the first Sunday of every month from March to November, when the town can accommodate as many as 2,000. Carlson said, in an interview with the High Plains Journal last year, that 1,589 bikers eating breakfast on one Sunday morning was her record, at that time. The food, when we were there a couple weeks ago, was a simple but good buffet. We finished the day in Hutchinson Kansas, where another relic of railroad days looms in the evening sun. This grain elevator, abandoned now, used to be serviced by the Santa Fe. The next day, and another eating venue - this time it's the Grace Episcopal Church in Hutchinson, KS for the annual Victorian Tea fundraiser for the Mental Health Association (MHA) of Reno County. This was quite a switch from yesterday's cafe frequented by bikers. 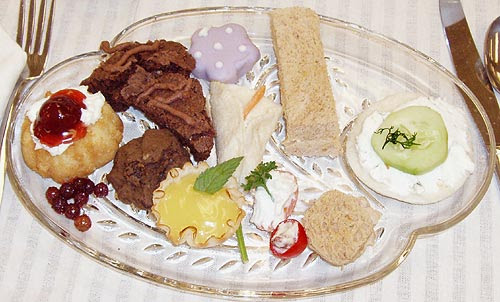 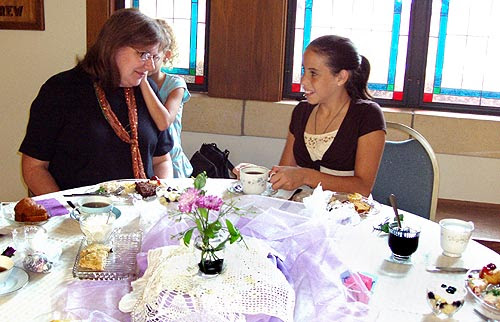 Entertainment in the form of story-telling was furnished by "Scarlett." Ace is reminded of Wilber T. Wrangler in that humans are not always what they seem.

Ace settles at a table of animated ladies and studies their interaction. MHA Director, Patsy Terrell, said of the gathering: "I think people are eager to have a reason to dress up a little bit and do something out of the ordinary. I'm always struck by how much people are enjoying just talking with each other. I think it's because we don't do it very much anymore." 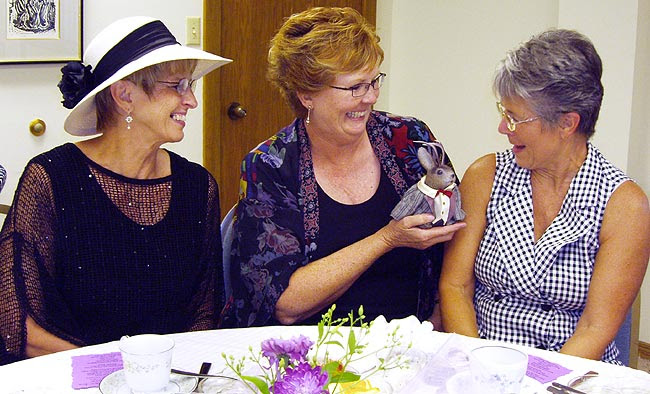 Susan, a "thelope" reader, introduces Ace to her friend, Kathleen, who acts as if she's never seen a jackalope sporting tea party finery.

Another fine meal has been consumed, and the sun sets again on Kansas. In deciding where to eat, I always give weight to stopping at a place with a cool old sign. 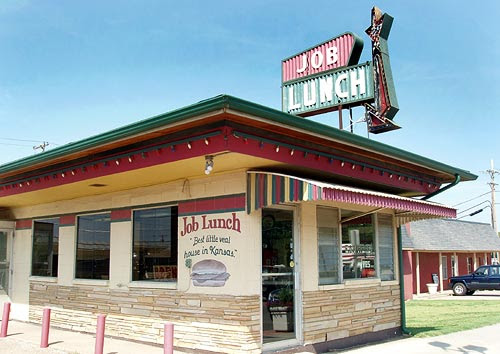 Such is the case with Job Lunch in El Dorado, Kansas 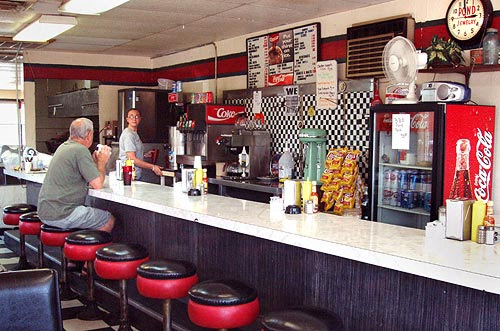 The building dates from the early 1960s and has a long counter and several booths. Our server, Dani, took good care of us. 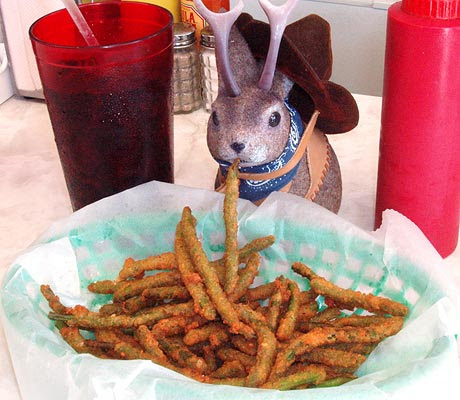 Job Lunch is known for serving veal, but Ace was most attracted to fried green beans. Yeah, you read that right. Imagine - they have taken one of natures healthy gifts, green beans - and deep fried them. But, oh my lord, they are tasty. I could gobble down a whole sack of these while driving. As I left, I was treated to a perfectly framed reflection in an adjacent building. What shall we eat tomorrow?