The Lope: Bridging the Ohio in Style

Bridging the Ohio in Style

I seem to be enamored of bridges. I didn't know I liked them that much until I was editing these, the last of July's Ohio trip pictures. Most of these are shot from a moving car. 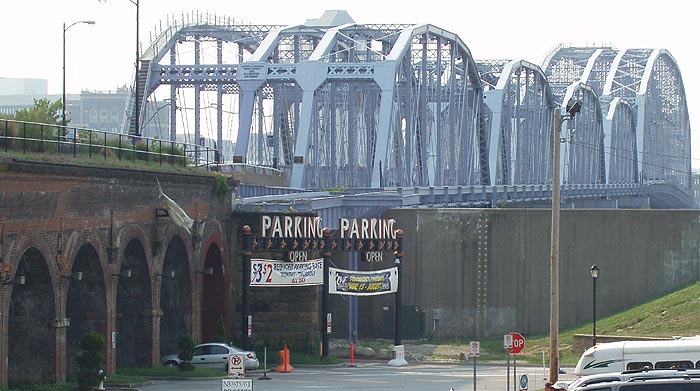 Cincinnati's "Purple People Bridge" spans the Ohio River to connect the city to Newport in Northern Kentucky. This railroad bridge was built in 1872 as the Newport and Cincinnati Bridge, has been renamed twice; the name that seems to have stuck is the Louisville & Nashville RR Bridge, or the L&N Bridge. It's been modified and expanded many times to carry horses, carts, trolleys and cars. It was placed on the National Register of Historic Places in 2001 and was finally made a pedestrian-only bridge in 2003. There's a lot of historical data (not all dry stuff...really!) and a neat photo of a zillion rubber ducks being dumped off of it, here. This view is from the Newport, KY, side; the original 1872 arches have found use as a parking garage.

The I-471 Daniel Carter Beard Bridge, dedicated in 1981, is known by the more colorful name: "Big Mac Bridge." I've read two similar origin stories for this. One has it that the name derives from an aborted 1980s attempt by McDonald's to open a floating restaurant nearby; the other account simply points out the bridge's golden arches. Read more, here.

If this design looks familiar, you may be thinking of the Brooklyn Bridge. Architect John A. Roebling designed this suspension bridge, which was finished in 1866. It was re-named after him in 1984 and was previously known as the Covington and Cincinnati Bridge. Roebling later used the same techniques when he designed the Brooklyn Bridge in New York. I'll try to get a better view next time; in the meantime, read about it here, if you are so inclined. 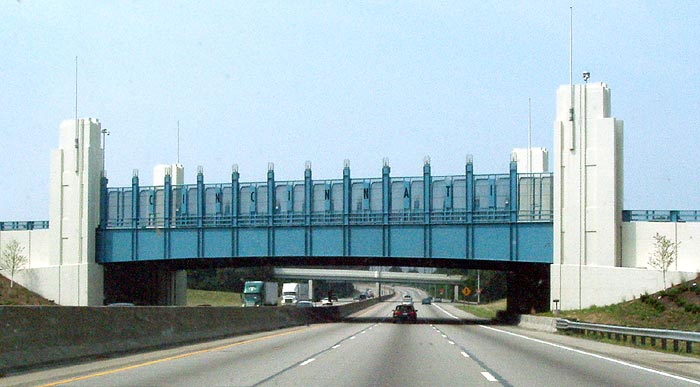 I'm not sure, but I think we were on Hwy 75 when I shot this. I would assume it's in Cincinnati; I like the art deco touches.


And now, a smattering of buildings, signs and monuments, about which I know little or nothing at all, except that they each held some aspect of architecture or signage that I thought appealing. The photos aren't great, but remember, they aren't making any more old buildings or signs so shoot 'em however you can. 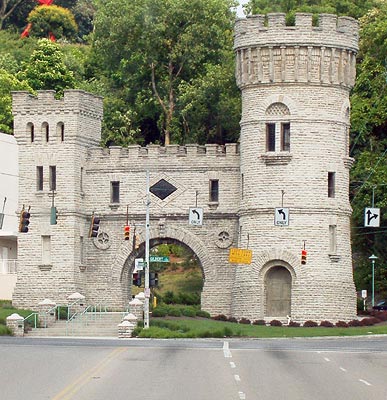 This castle-like structure has a plaque which reads, "Elsmore 1883". Looking at it now, the road lines confuse me; it looks like you'd just drive right into it. 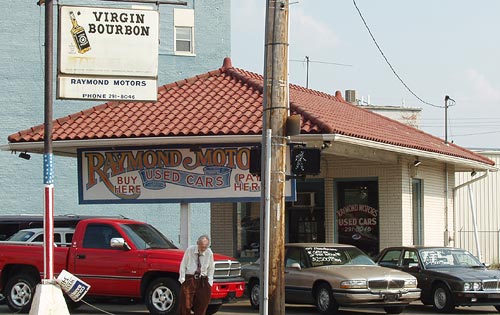 This old gas station in Newport, KY is now....Raymond Motors and Virgin Bourbon? Am I reading that right? I hope customers can't buy a car and get tanked up at the same time. This is probably a case of a newer business owner not wanting to mess with an older sign....I hope. 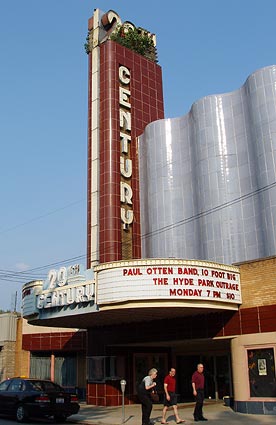 The 20th Century theater in Cincinnati is across from the Aglamesis Brothers ice cream parlor and down a block. It appears to be in use. 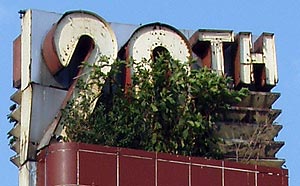 But it has a little tree problem at top. 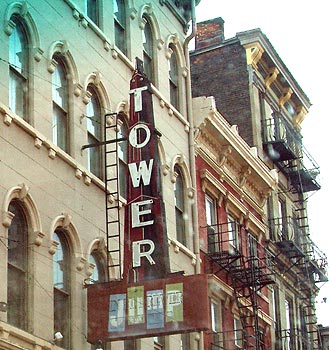 "Tower"..."Jump"...I hope that's not supposed to be a subliminal suggestion. 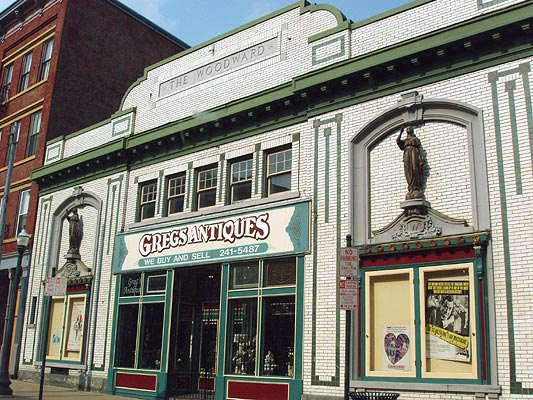 This used to be the Woodward theater; it now houses Greg's Antiques.

Paul Brown Stadium looks to me like it was built from an erector set. 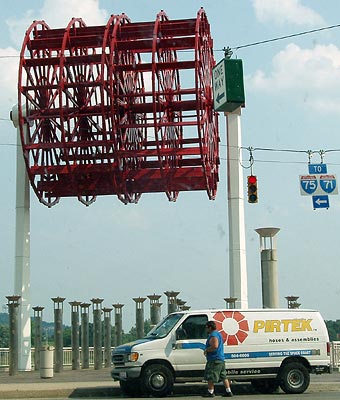 I assume monument this might commemorate the role of paddle boats in the history of the area. Whenever you're in a river town, you can still feel the vibrancy - the echo of the superhighway status rivers used to hold - and still do in some areas. 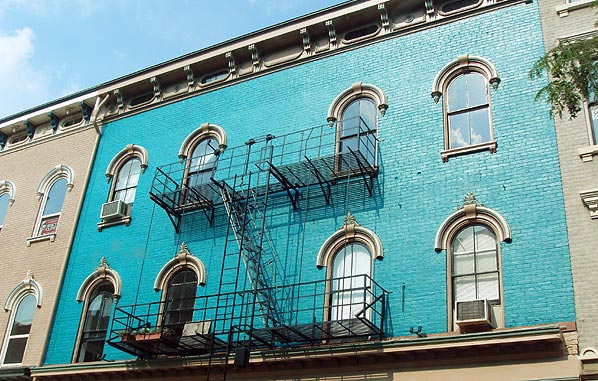 Someone dared to be different and painted their building blue. 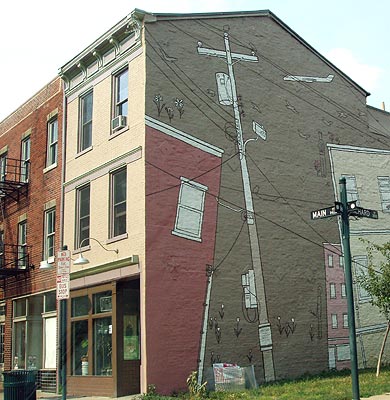 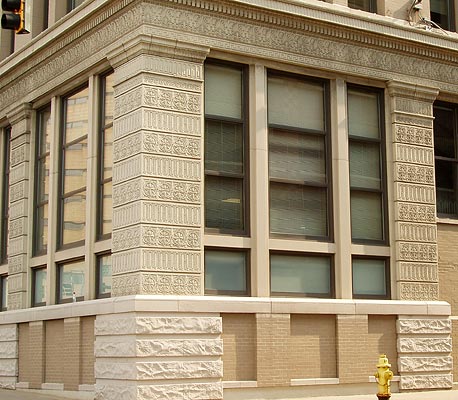 I liked the texture. 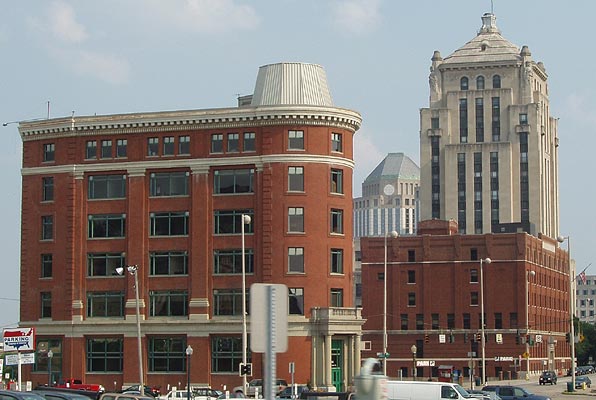 The contrasting shapes appealed to me. The more distant one in the middle is part of the Proctor and Gamble Twin Towers building. Soap manufacture is big in Cincinnati. 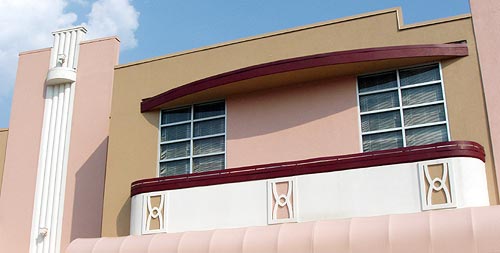 This is a nice "sort of art deco" building. 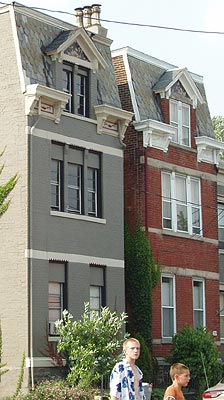 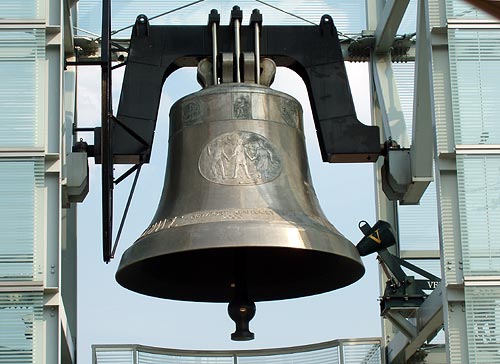 I've no idea what the bell commemorates. 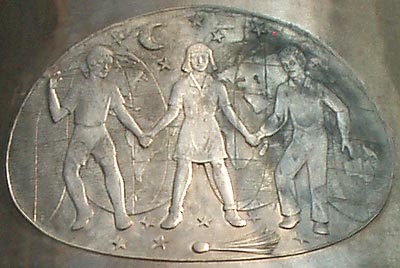 But I like the moon and comet in it. Is that a girl or a young Prince Valiant in the middle? 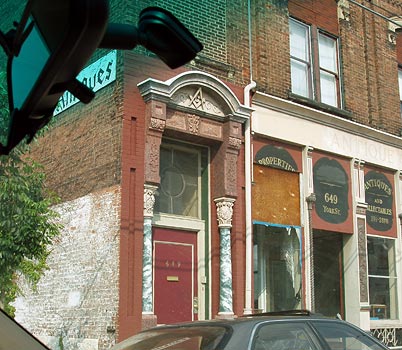 An old Masonic building...I wonder if Ace Jackalope could get into the Masons? 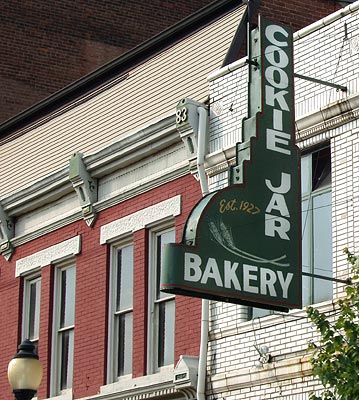 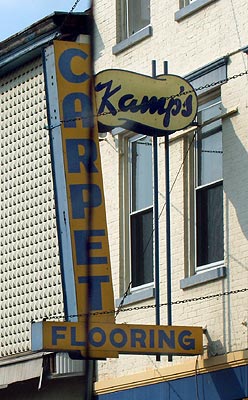 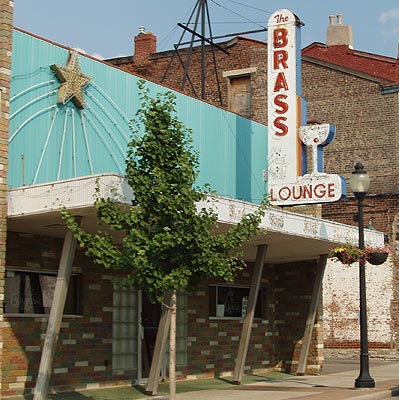 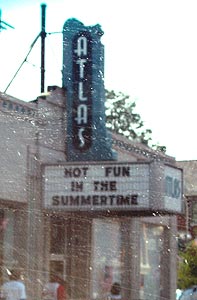 This is a hazard of "from the car" photography. The auto-focus (no manual over-ride) locked onto the bugs on the windshield in this pic of the Atlas Theater. 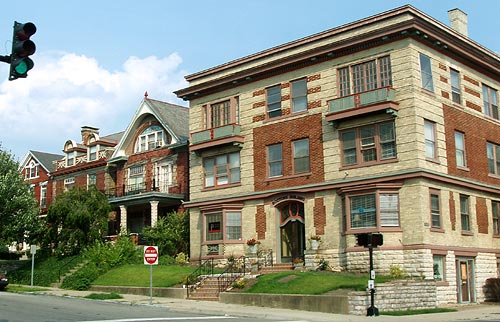 This is a nice row of housing of different styles.

The Edge Inn tavern is in Cincinnati. 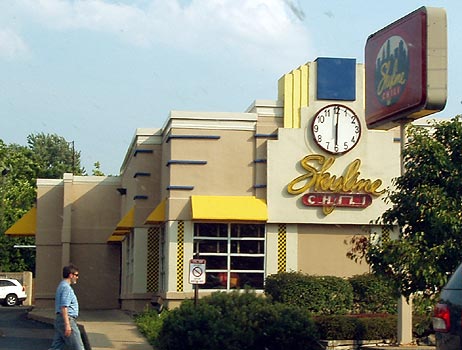 Skyline Chili is a regional chain. The building reminds me of Smokin' Bar-B-Que in Dayton, or an old White Tower.


I'd like to extend a "thank you" to Richard and Barb for their culinary scouting and superb driving during our stay in Ohio.

I love bridges too. I like to cross them by car and to admire the spectacles. It is a great feeling to be over the rest of the world.

Cool pictures. Interestingly, Cleveland has an Atlas theater as well. I would probably have a picture of it but there was too much construction stuff obscuring the view when I was there.

This concerns the picture of the bridge above with the caption:
"I'm not sure, but I think we were on Hwy 75 when I shot this. I would assume it's in Cincinnati; I like the art deco touches."

Sure enough, this is Northbound on Interstate 75 within the city limits of Cincinnati.
The bridge is Paddock Rd for which there is an interchange for 75.
Hope this doesn't kill the romance but the bridge is quite new, completed sometime in 2004.

Just wanted to clarify a few things about the signs from Newport KY. The Atlas sign, is actually from Atlas Cleaners, a dry cleaning company. The bell, is actually the World Peace Bell. The Brass Lounge, is actually called The Brass Ass Lounge, a local Strip club. If you look closely, you can see the neon Donkey under the word Brass. And the Cookie Jar Bakery has amazing homemade donuts. Thanks for taking the pictures of Newport!