On day five of our Joplin to LA trip we were well into California on Rt66. It was August 3rd; we had just passed southward under I-40 on Rt66 to begin a loop that takes old 66 a maximum distance of about 15 miles from the interstate. Rt66, also called the National Trails Highway through this part of California, won't rejoin I-40 for over 60 desolate, very hot asphalt miles that string together a small group of near ghost towns. I hadn't seen any of it and was very excited. This shield is on Rt66 just south of where it crosses under I-40. 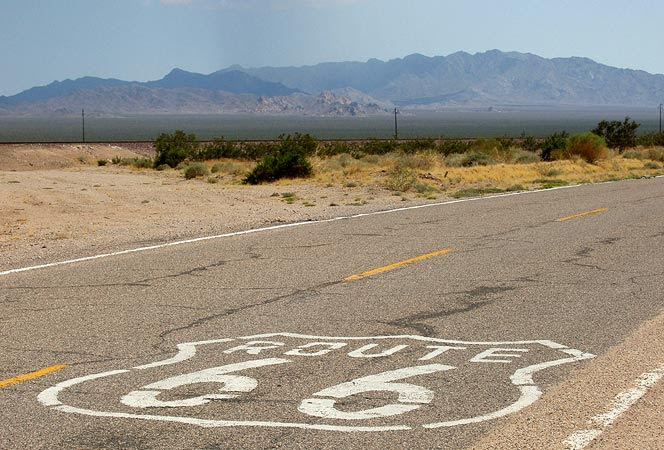 More rain in the distance, in the Piute mountains.

The Essex post office and abandoned market next door were built out of native stone. 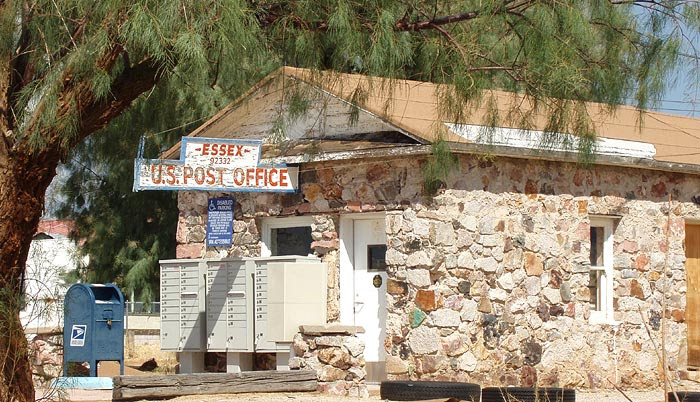 Essex used to have a free well, which was a big deal in the heyday of Rt66 because gas stations often charged ten cents for a glass of drinking water or a gallon of radiator water.

There is an earthen ridge on the north side of Route 66 between Essex and Amboy. Travelers have left their names, written in stones, bottles, etc. for all to see. Many were unreadable due to missing rocks but some were quite legible. I have read that this practice began in the 1970's.

I just had to make a place for "ACE". My effort was crude and we really could have used more big rocks, but I could not do so without robbing from other names. Those rocks were HOT, let me tell you; I could handle them only long enough to toss them in place.

General George C. Patton placed his Desert Training Center in this region of the Mojave Desert during WWII in order to be prepared for the conditions his tank corp would encounter when challenging Hitler's "Desert Fox", General Rommel, in North Africa. It worked beautifully for this task and, because of Patton's success, Germany was not able to acquire North African oil that might have changed the course of WWII.

The abandoned Roadrunner Cafe lies about a mile and a half west of Chambless. 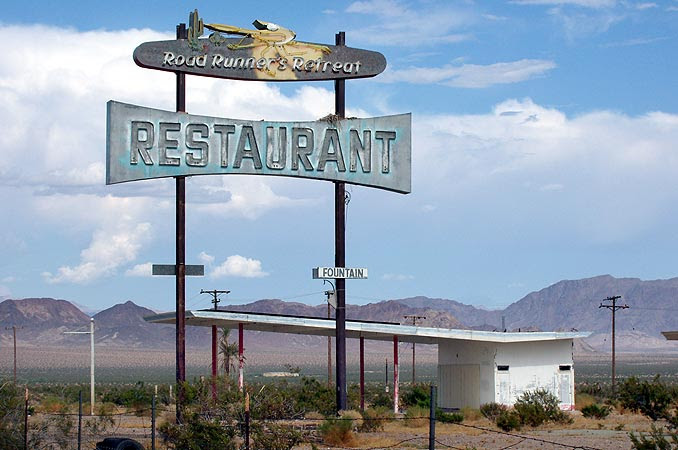 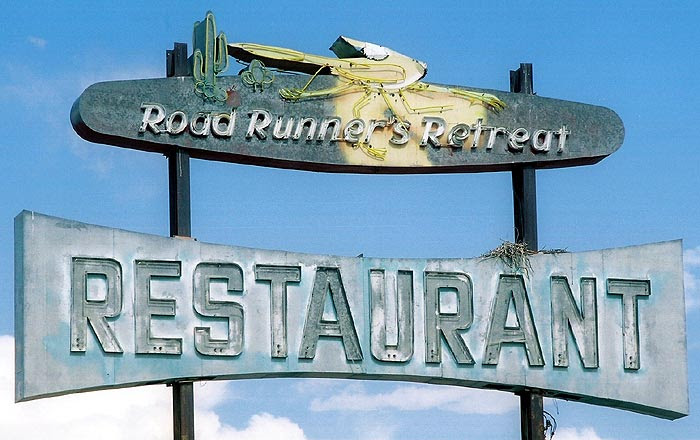 Looking back east from the Roadrunner, one gains a magnificent view of Cadiz Summit in the Marble Mountains. 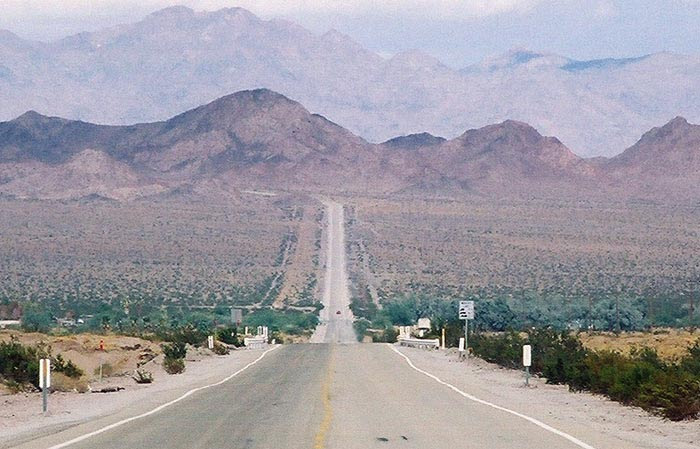 This is the view opposite from the above picture - looking west from the Roadrunner toward the Bristol Mountains. We may owe the continued existance of all of the Bristol Mountains, in part, to the Russians.
Why? Well, thereby hangs a tale.
In the early 1963, the Atomic Energy Commission and the California Department of Transportation planned to use 22 full-scale nuclear bombs to vaporize a corridor through the mountains north of Route 66 for the new Interstate 40. It was called Project Carryall.

According to Tom Snyder in his "Route 66 Traveler's Guide": "Incomprehensibly, the plan goes foreward and officials from the federal government, Santa Fe Railway and Caltrans are busy deciding where to put the reviewing stand and VIP seating. There is no record of anyone giving thought to the consequences of the blast for people living in nearby communities. But the officials did have their reviewing-stand decorations all picked out."
According to Snyder, the plan was stopped when the Russians signed the 1963 Nuclear Test Ban Treaty.

As is so wonderfully common on Rt66, the old Santa Fe (now BNSF) mainline runs parallel to Route 66. The train is going the same way we are, toward Amboy and the legendary Roy's Cafe. 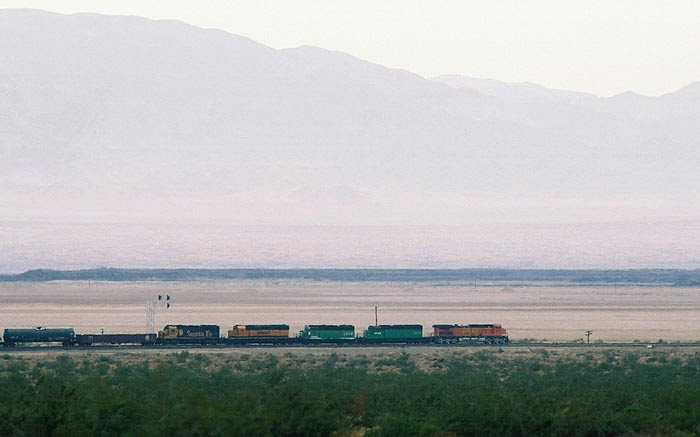 posted by Ace Jackalope at 1:24 AM

Thanks; it was a bit confusing to research, especially the exact cause of the plan's demise. Btw, love the nuclear Nevada license plate on your blog: http://www.quartzcity.net/blog/archives/2006/01/09/nevada_nuclear_test_site_license_plate_for_real_now.html

love the roadrunner stuff.i am planning a trip there and amboy.did you manage to get to amboy?

Yes, we had the pleasure of Amboy: http://thelope.blogspot.com/2006/01/amboy-california.html Take lots of pics and tell us how the restoration is going. Bon Yoyage!