The Lope: They'll Have to Choke Their Chickens Somewhere Else

They'll Have to Choke Their Chickens Somewhere Else

Long-time Kansas City, MO eatery and landmark institution, Stroud's South, will close its doors for good this coming New Years Eve. The buckled building, which dates back at least as far as 1933, was taken by Kansas City for the widening of 85th Street. Customers routinely park blocks away and walk along busy 85th street for the opportunity to wait for a table. When we were there Dec 22, the wait was 2 hours and 15 minutes.

"We choke our own chickens" has been the motto of Strouds for years. I wonder if any school systems have banned the shirt? The menu includes several items, but the general favorite is the pan-fried chicken dinner. According to the book "Road Food" by Jane and Michael Stern, "Stroud's makes the most delicious fried chicken in America and accompanies it with potatoes, pepper gravy, and cinnamon rolls to match." 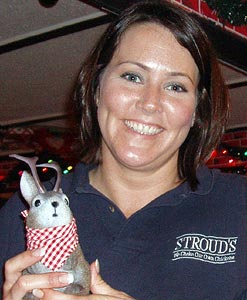 The floors of the building are old, wooden and off-level. Although Strouds has two other locations and will open another restaurant soon in an old firehouse, the character of this one will be missed. posted by Ace Jackalope at 1:00 AM