The Lope: "This here's the bones of a country"

"This here's the bones of a country" 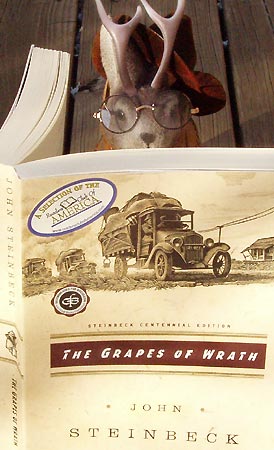 Before embarking on the August, 2005 driving trip to California, we read Steinbeck's "The Grapes of Wrath" to fully appreciate the impact the Colorado River crossing had on the dust bowl immigrants of the 1930s. Untold numbers of "Okies" fled the parched, exhausted soil of large parts of Oklahoma and Kansas seeking jobs in the promised land of California. Most were disappointed. 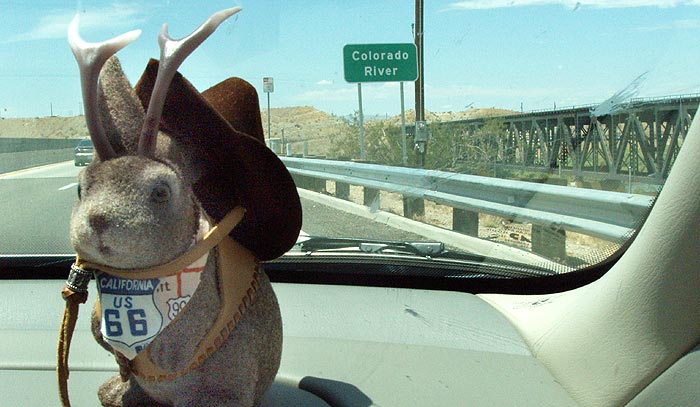 We crossed it shortly after noon on August 3, 2005, and saw what the modern traveler sees: the concrete bridge of I-40 beneath, and a railroad trestle to the North as one leaves Arizona and enters California.
But the Okies traversed a more elegant structure. The Old Trails Arch Bridge was in service from 1916 until the newer Red Rock Bridge was opened in 1947. Sometime after the new bridge opened, the Old Trails Arch Bridge was converted to support a gas line across the Colorado River, a purpose it still serves.

As for its replacement, the old 1947 Red Rocks Bridge was abandoned in 1966 when I-40 replaced it, and was torn down in 1976. Only concrete footings remain today of this bridge across the Colorado River. 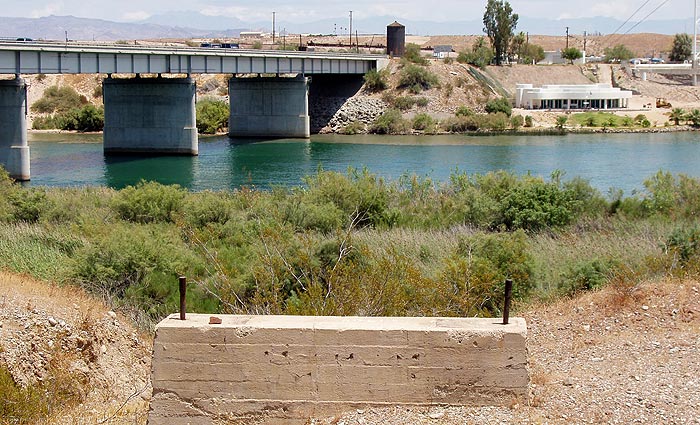 After crossing into California, you can exit onto National Trails Highway (Rt66) and follow 66 towards the river. After passing under the railroad bridge and I-40...

...the old road ends at the Colorado River near the old footings from the Red Rock Bridge and the old Historic 66 Billboard. This billboard used to read "Breathe Deeply Folks", advising travelers that they were about to enter Arizona. Today it advises travelers on I-40 to turn right at the next exit for Historic Route 66.

Despite the intrusion of a few leisure craft, and the fact that this stretch of 66 along the Colorado is really quite pretty, Steinbeck weighs heavily on one's mind at this place:

"They drove to Topack...Then across the bridge into the broken rock wilderness. And although they were dead weary and the morning heat was growing, they stopped.
Pa called, 'We're there - we're in California!' They looked dully at the broken rock glaring under the sun, and across the river the terrible ramparts of Arizona.
'We got the desert,' said Tom. 'We got to get to the water and rest.'
The road runs parallel to the river, and it was well into the morning when the burning motors came to Needles, where the river runs swiftly among the reeds.
The Joads and the Wilsons drove to the river, and they sat in the cars looking at the lovely water flowing by, and the green reeds jerking slowly in the current." 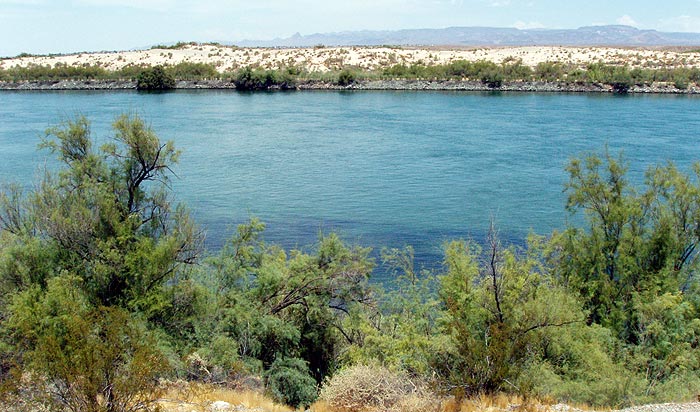 From this stretch of old 66, you can see the mountains that gave the nearby town of Needles its name; again, from The Grapes of Wrath:

"They lay in the water and looked at the sharp peaks called Needles, and at the white rock mountains of Arizona.
'We came through them', Pa said in Wonder."

"And Tom, looking at the ragged peaks across the river and the Needles downstream: 'Never seen such tough mountains. This here's a murder country. This here's the bones of a country.'"

posted by Ace Jackalope at 6:12 PM

I love the pic of The Lope reading. I knew he was a Lope of Letters.

The lope looks like he enjoys his reading. Was he school learned, or is he a citizen of the world, experiencing life as he lives it?