The Lope: "Mountain Lying Down"

The view from highway 64, which goes north from I-40 to the Grand Canyon, is quite scenic in and of itself.

This was day four of a three-week trip, August 2. We had left La Posada in Winslow, AZ a few hours previously.

Of course, the road to the Grand Canyon has a few tourist traps, but at least Flintstones Bedrock City has a bit of pop culture appeal. 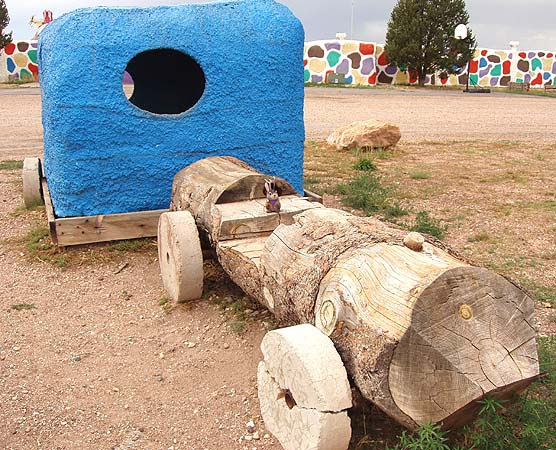 As we neared the Grand Canyon National Park, there was a refreshing site: snow in the trees. This was August, remember. We probably should have pulled over to shoot it but we were concerned about getting to the canyon in time to see a little sunshine, as storms had loomed all around us this day.

As you near the canyon, anticipation built up by countless images, be they from TV or old prints and photographs, you see it...

The cars...lots of them...way more than there are spaces for. We found a place to park beside a nearby road.

I really love to watch people when they see the Grand Canyon for the first time.

The rock, the light and the fact that blue light rays don't travel well through moisture concoct to show the canyon in colors of vivid red. Down in the shadows there live cool blues and greens. Actually, some of this blue is due to smog. The fact is that the canyon is not as clearly seen as when I was a kid. Sometimes I swear it looks two-dimensional - like a Hollywood matte painting. 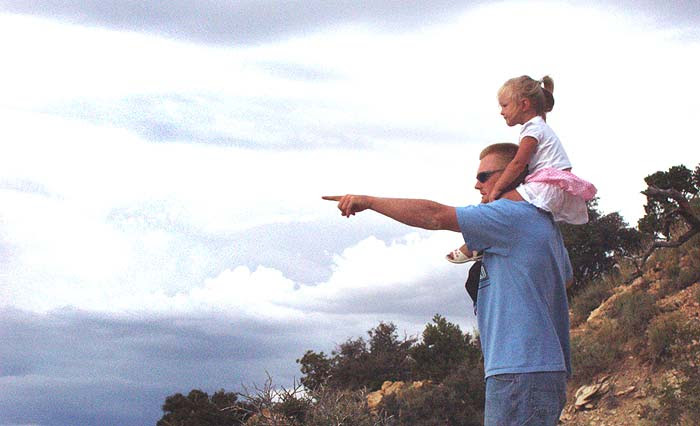 A cloud retreats, and the sun sculpts the more distant details. Isn't it amazing how, even at such distances, two human eyes just inches apart perceive this staggering range of depth? By the way, the Grand Canyon is 277 miles long, 18 miles wide, and 6,000 feet deep. I envy the early explorers, Native American, European - all of them. I cannot imagine what it was like to not know what lay ahead and emerge from the forest into this breath-taking sight. The Paiute indians call it Kaibab, meaning "Mountain Lying down." Explorer John Wesley Powell dubbed it the "Grand Canyon" in 1872. Ace wears a Native American-ish symbol from one of the area tourist traps. Maybe someone can write and tell us if its halfway accurate. Many tribes have passed through here - paleo-hunters 11,000 years ago and hunter-gatherers from about 3000 to 1000 years ago. In about a.d. 500, a culture known as the ancestral Puebloan (Anasazi) came here and lived peacefully alongside another tribe, the the Cohonina people.

A new hunter-gatherer tribe, the Cerbat, moved into the canyon in the 1300s. Their descendants make up the Hualapai and Havasupai tribes, who occupy reservations in the western canyon today. At the same time, Southern Paiutes, bands of hunter-gatherers voyaged to the canyon's north rim.

The last Native Americans to arrive were the Navajo, who moved to the canyon from the northwest around a.d. 1400. They were highly adaptable and dominated the region. After centuries of occasional conflict with other tribes, as well as clashes with Spanish, Mexican, and Anglo arrivals, the Navajo are now the largest, strongest Native American tribe in the United States. Their reservation abuts the eastern section of the Canyon. Its always fun to meet people when on the road; Michael from New Bedford MA and Kristen from Providence RI pose with Ace. 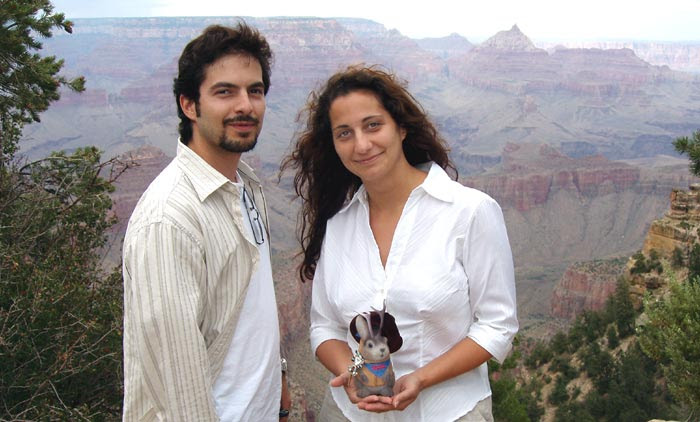 I've been attracted to clouds these past few months...saw this one right as we turned to go down the road to the point called Desert View. 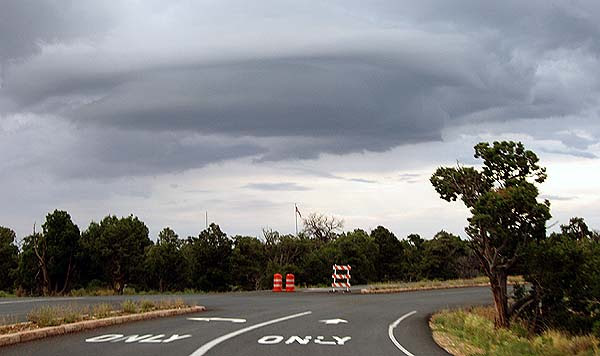 The Watchtower was commisioned in 1930 by the Fred Harvey Company as a rest stop and gift shop at a place along the canyon's south rim called Desert View. To design it, they hired renowned southwestern architect, Mary Colter. If you've been reading this blog, you may recognize the name as the same woman who designed La Posada. Unfortunately, we arrived a few minutes after it closed so I did not get to see the Hopi-inspired murals inside. The texture of the tower makes it look much older. Colter hand-picked all of the stones and places weathered sides toward the outside to enhance an ancient appearance. A geological feature near Desert View. The sun has gone, swallowed by the storm so as to give us no sunset. It starts to rain and the warmth of the light fades, leaving blurry shades of blue and green. The rain stops, and the almost monochromatic canyon serves as a setting for the silver ribbon of the Colorado River. 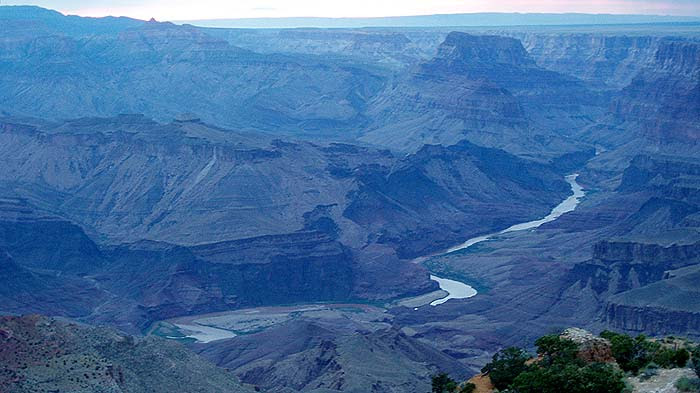 I start to resent the storm, but here, more than most places, it is clear that nature is the master...and the storm has a gift I can have if I am quick enough, so I put away the digital and take out a 35mm camera I've used for 20 years because the 35mm is faster. I'm looking through good old trusty glass again for the first time in awhile; it feels good.

I am patient. I wait, focussed and reverent, and the storm gives a gift better than the sunset it took. 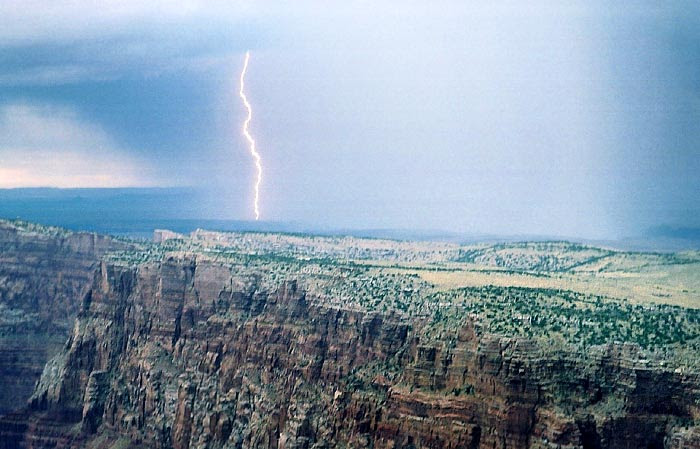 I actually whisper "thank you" under my breath though I don't know why. I exhale and my body deflates a little; I walk away from Desert View, very satisfied.

We went south to Williams and arrived at Rod's steakhouse just in time for a dinner sitting, then we sought lodging...didn't stay here, loved the sign. 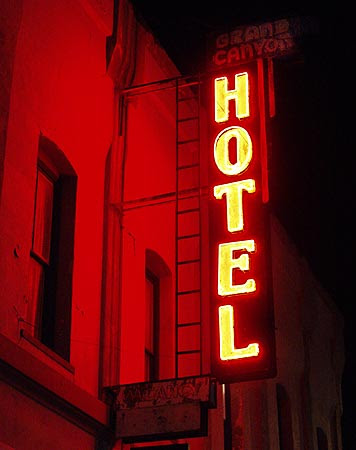 We didn't stay here either but the sign was cool. It seems many southwestern towns have an El Rancho motel, but it was never a chain. We settled at the Gateway Motel on Route 66 in Williams for the night. It wasn't bad; it wasn't great. It was adequate... Why insert a dull picture of a room, you ask? Because some of the emails I've received about previous entries in this blog have asked about the room conditions at motels I've shot. This cat on a windowsill is about the last thing I saw that night. I've always said cats are evil; I offer this in evidence. I made sure I included this since its actually a week before Halloween when I finally got around to posting this entry. The next morning, August 3, I shot a pic of a Grand Canyon Railway diesels just across Rt 66 from the Gateway Motel.

Before we left town, we took a look at the Grand Canyon Railway's steam engine getting ready to take another load of tourists to the canyon. I'd never seen their steam engine before, but I'd caught their classic Alco diesels on previous visits.

Then, we were off west with the goal of reaching Rialto, CA by nightfall.