Its been awhile since I've blogged anything from the three-week trip we took in August. One of the happy consequences of leading a busy life is that things keep happening in the present tense while you try to edit the pictures you took last week...which becomes last month...which becomes last season, etc. So, I am fitting these in as I can, between current events. 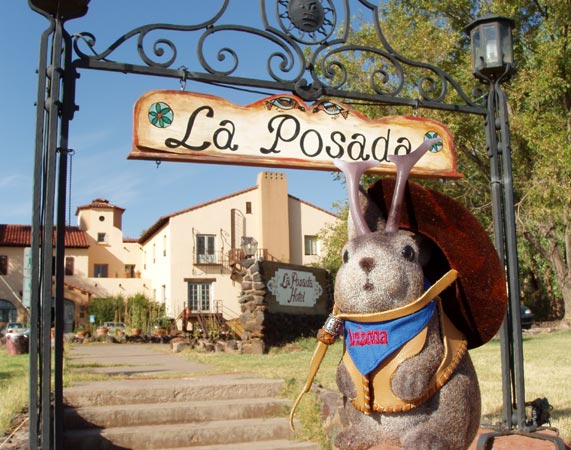 We awoke on August 2, the 4th day of our Joplin to LA trip, at La Posada in Winslow, AZ and our goal for the day was to see the Grand Canyon and then stop at some point beyond it on our trip west to LA. Ace and I had been to La Posada, a restored 1929 Harvey House on May 18 and May 28, as well as just the night before. 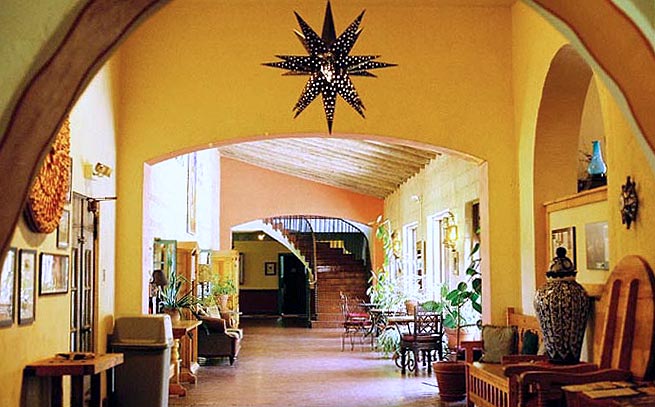 Our two new travel companions had never been there and were quite impressed. 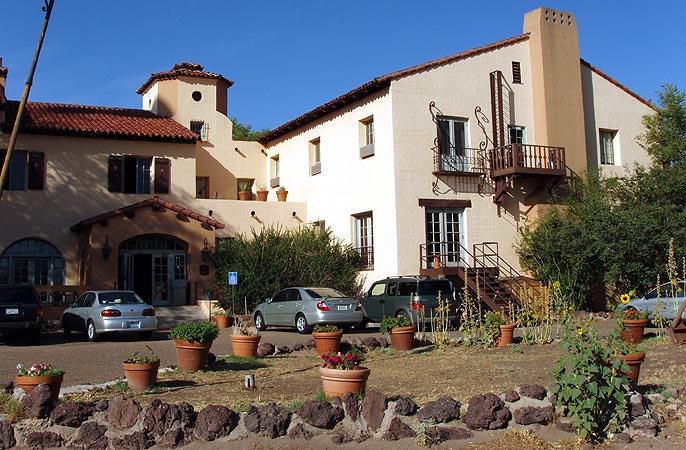 It was the only project for which Colter was able to design or select everything - structures, landscape, furniture, maids uniforms, dinner china and of course, building materials like this tile. 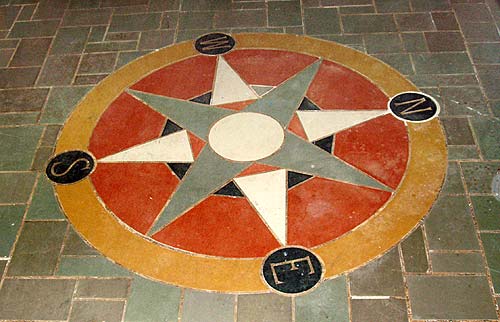 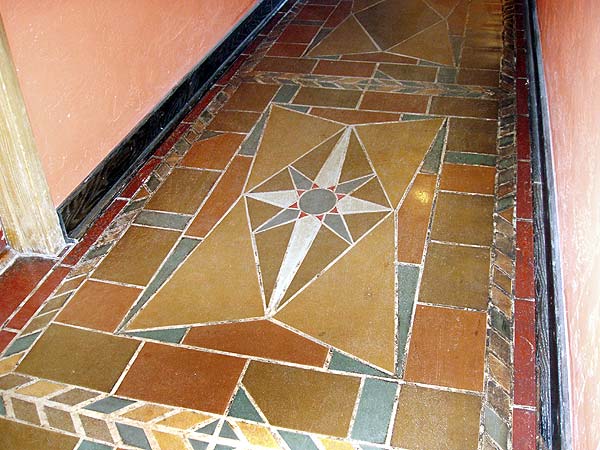 In the late 1920's, concrete cinder blocks, like these from an orangerie/hallway, were a new material and she was eager to exploit their possibilities.

Most of the original furniture at La Posada was auctioned in 1959 when the hotel closed to become a Santa Fe office. This dresser was purchased back sometime after its restoration began in 1997. 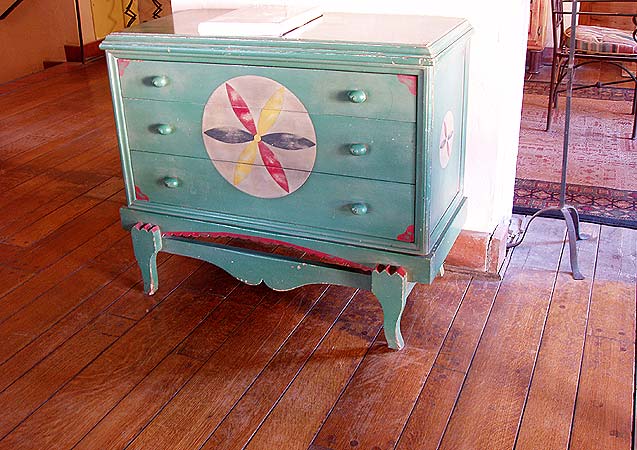 The ceiling fixtures are original. 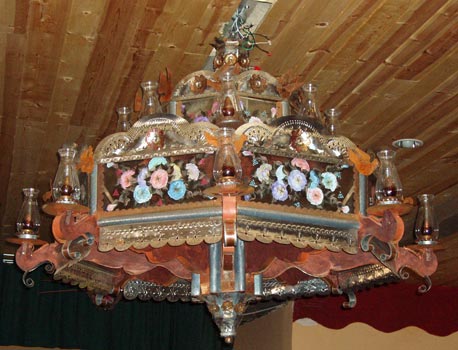 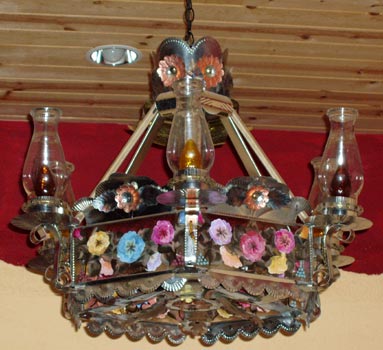 Colter's buildings have been described as "historical theater" because she wanted to educate visitors about the culture of the southwest through her work. She carefully chose historic and regionally specific building types.

Then it gets more interesting: Like J.R.R. Tolkein building an imaginary history for Middle-Earth, Colter imagined a history for La Posada. Here it is, quoted from their website (pics are mine):

"In the 19th Century, the region around Winslow was settled by Basque ranchers from Northern Spain. For La Posada's 'history' Colter wanted a grand hacienda, the sort of home that might have been built if there had been a timber and cattle baron for Northern Arizona. The home would be large and rambling with many additions as the family grew and the business prospered..."

"...There would be a heavy influence of Mexico and Spain - the family roots..." 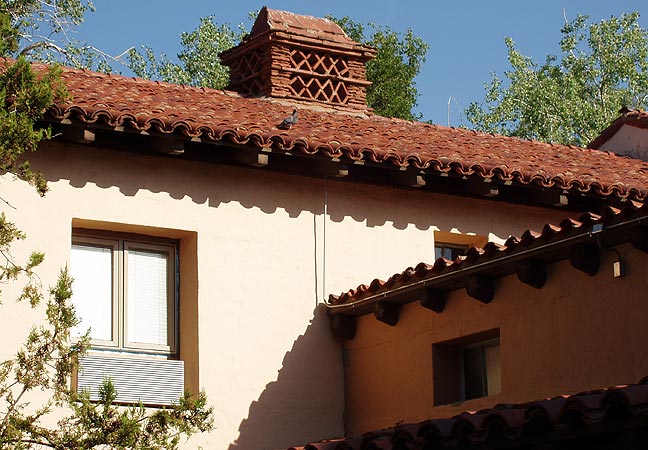 "...There would be patron saints and hacienda gardens. It would be enormous - eventually growing to 72,000 square feet in the main house alone; the home of a fabulously wealthy and cultured Spanish Don..." 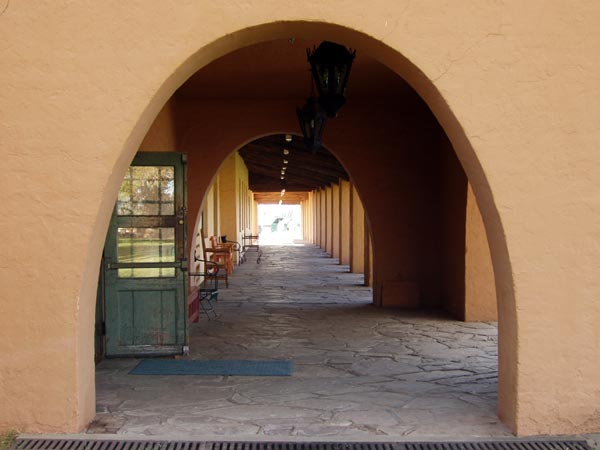 "...Colter designed the central part of the hacienda as if built in 1869, with major additions to east and west during the next 60 years. And then, the story goes, in 1929 the family sold the place to Fred Harvey for 'conversion' to a hotel. It's all a fantasy of course - the hotel was built in 1929..."

This is a replacement Madonna for one that originally hung in this spot. 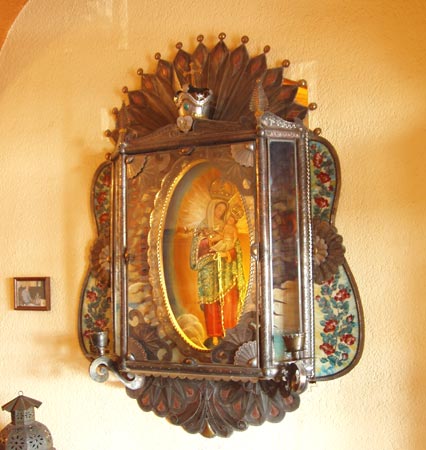 This is also a real railfan's hotel. Guests can sit in chairs at the end of this walk and even be served food from the restaurant as they watch trains on the Burlington Northern Santa Fe double main line. 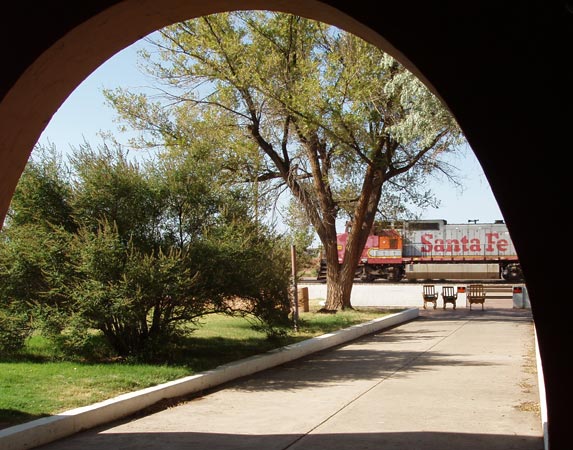 I seem to be infatuated with the juxtaposition of the old statue with the trains. 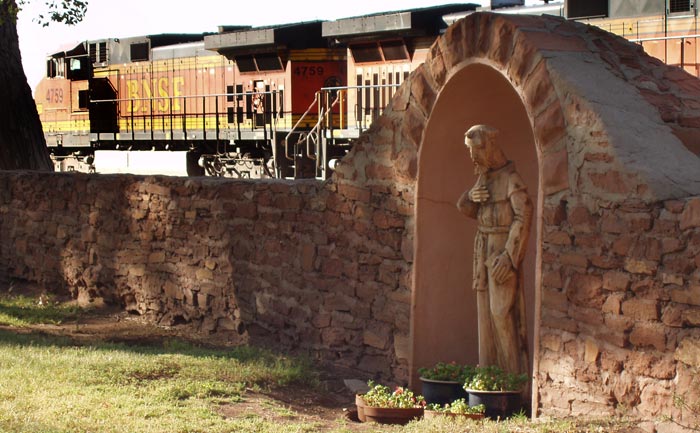 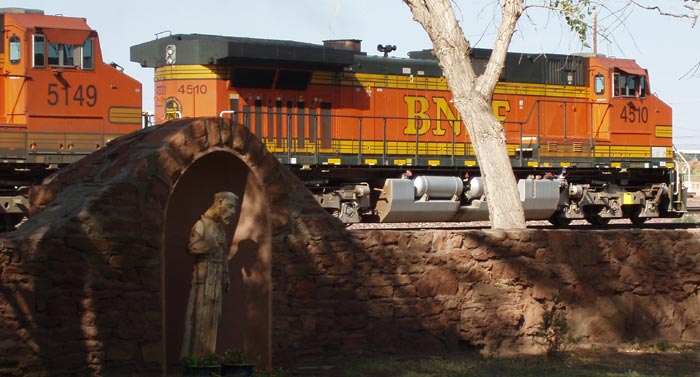 The building on the left, also designed by Colter, is still in use as an Amtrak station.

Colter used many Native American motifs in her work, such as the wavy lines on the train station doors.

Here are views from the other side of the doors. 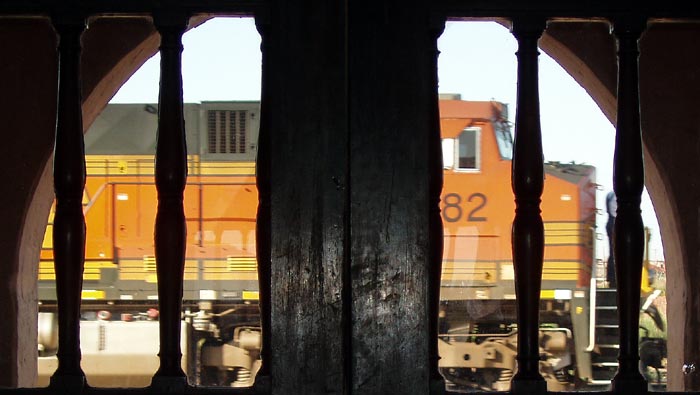 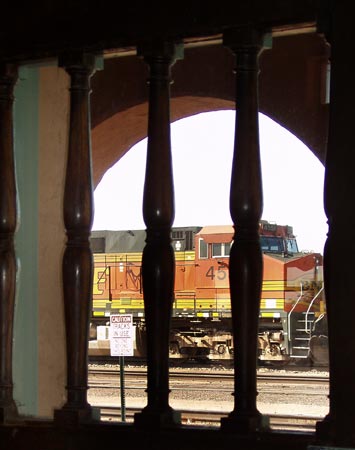 I once read that, over decades, glass runs very slowly like a liquid, resulting in the ripples we see in old window panes. I don't know if that is true, but I love the effect. 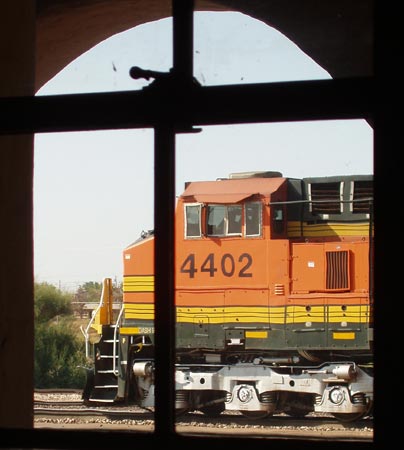 Back in La Posada's dining room, The Turquoise Room, we admired the placemats. They do sell them, but I think the price was something like $50 each. 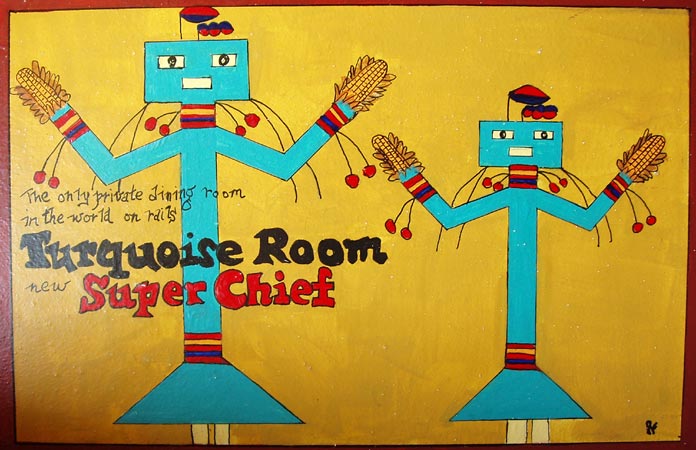 Breakfast - To my surprise, I've had some feedback from people who really liked seeing the food from different places along Rt 66; apparently this blog is being cited as a source of travel info by some of the people we've visited along the way. We're very flattered...now, here's your breakfast. 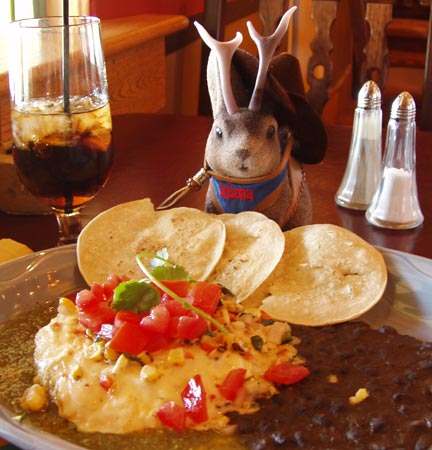 Someone else's breakfast - if Ace finds your breakfast more interesting than his, he'll have some. 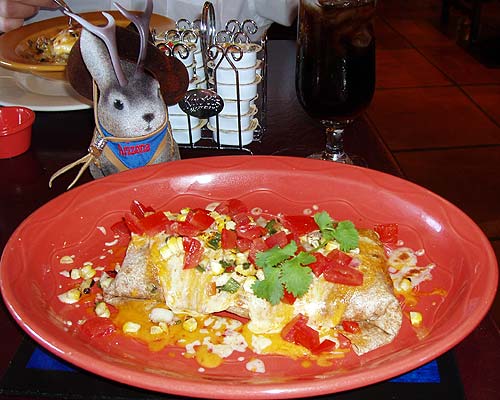 This architecture student was studying the works of Colter; she was on her way to the Painted Desert and asked about motels in Holbrook. I recommended the Wigwam Motel, of course. 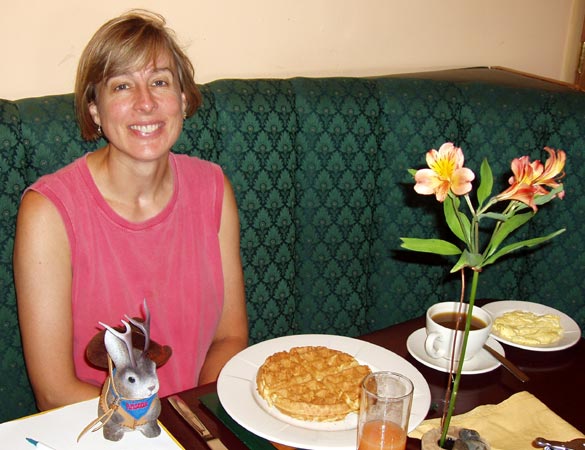 We finally tore ourselves away from La Posada. This mural is on a building across from the Winslow, AZ post office.

I particularly like this part, portraying a classic streamlined passenger locomotive. These are the locomotives I grew up admiring and photographing, not the boxy diesels that roam the tracks now...but, hey, you take what you can get. 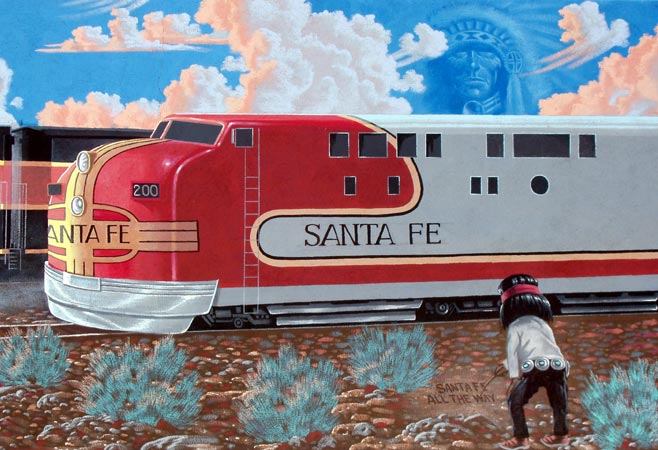 There is some nice signage on Route 66 just across from La Posada. 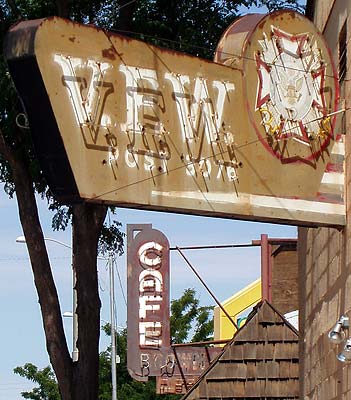 "On October 8, 2004, fire destroyed the historic JC Penny/Rasco building. The east wall of the structure served as a backdrop for the "Standin on a Corner" Park mural. Because of safety concerns, no one has been allowed access to the park. We look foreward to a resolution to this unfortunate closure." The sign gives this website for more info: http://www.standinonthecorner.com. 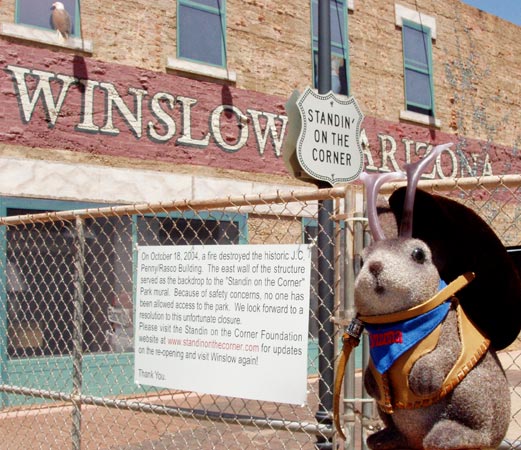 In case you missed the 1970's, "standing on a corner in Winslow, Arizona.." is a line from the Eagles song, Take it Easy. Winslow was quite happy to gain some tourism from that and the current state of the park does not stop merchants from piping the song on an endless loop out into the streets.

West of Winslow - another dust devil; I love those things. 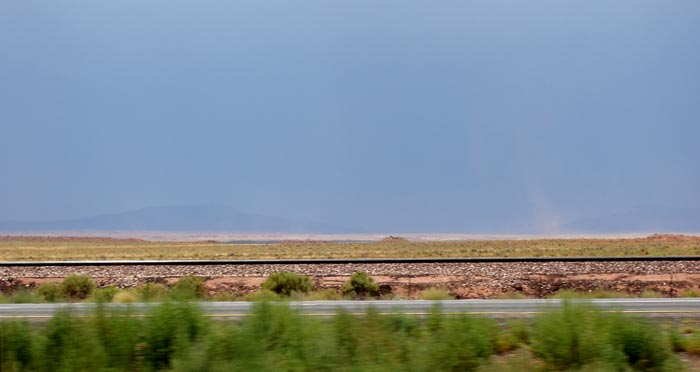 The entire drive was scenic. I believe this was near Flagstaff on Interstate 40. 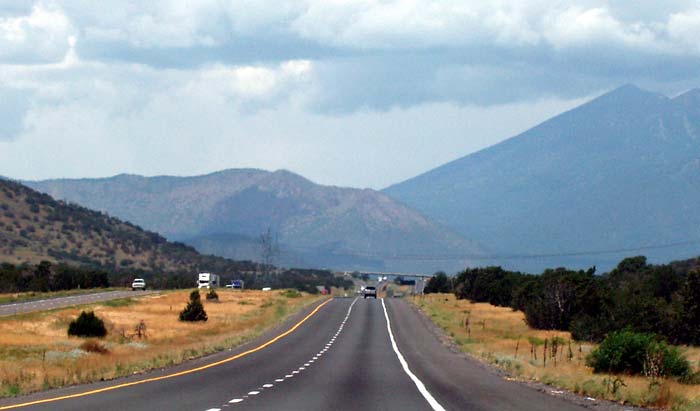 The weather was iffy that day; it always seemed to be storming around us, but we lucked out and didn't have to drive in any heavy rain. And what would a trip through the southwest be without a few beautiful storms to watch?

posted by Ace Jackalope at 5:47 AM