Some readers have expressed a desire for "more lope, less other stuff." Well, here is a tale of Ace in a foreign land...well, almost foreign.."foreign-ish", one might say. By the way, "valkommen" means welcome, so valkommen to the first of three posts on Lindsborg. 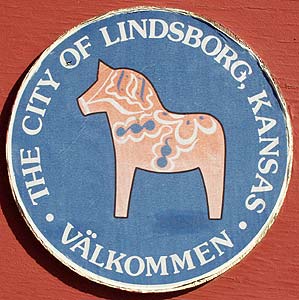 That Lindsborg, KS is nicknamed "Little Sweden, U.S.A." is appropriate. I am told that King Carl XVI Gustaf of Sweden once remarked that Lindsborg was more Swedish than Sweden. They certainly do have the decor. 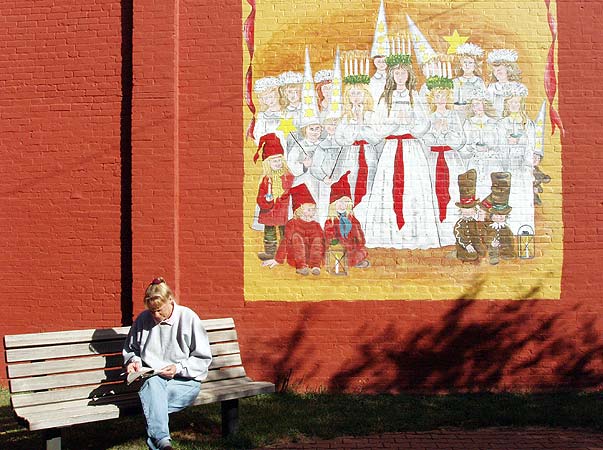 Lindsborg is chock-full of Dala horses. They are painted on the signage, printed on the banners and are the main souvenir in the stores. In very recent years, fiberglass horses painted by local artists have multiplied in the streets in the manner of the fiberglass cows used in many US cities.

If you are not from central Kansas or Sweden you might well ask: "What *is* a Dala horse?" I've read varying accounts of the origin of these decorated wooden horses but the general story is that the Dala horse originated in central Sweden in the 18th century when wood scraps were carved into horses. Sometime in the 19th century, the horses were painted orange due to the availability of copper pigment from copper mines, and decorated with flower-patterned saddles called "kurbits". This assortment is at a store called Swedish Crafts. 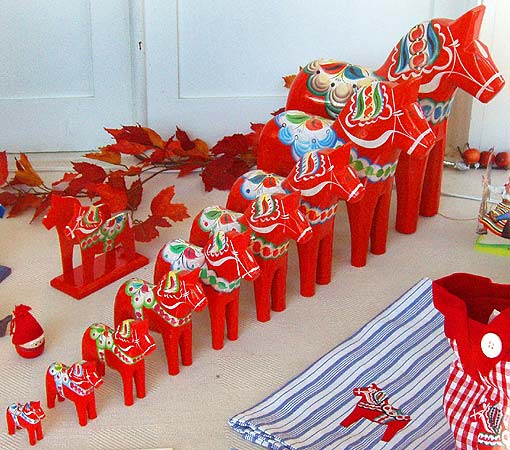 Over time, pigs and chickens were also carved, and other colors, particularly blue, black, white and natural wood, were available. These are also at Swedish Crafts. 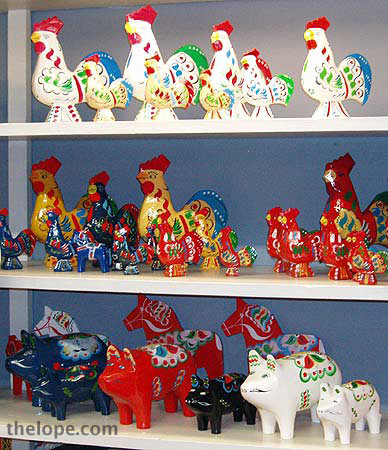 And these are at Hemslojd, a store that imports Dala horses and makes Dala horse signs. 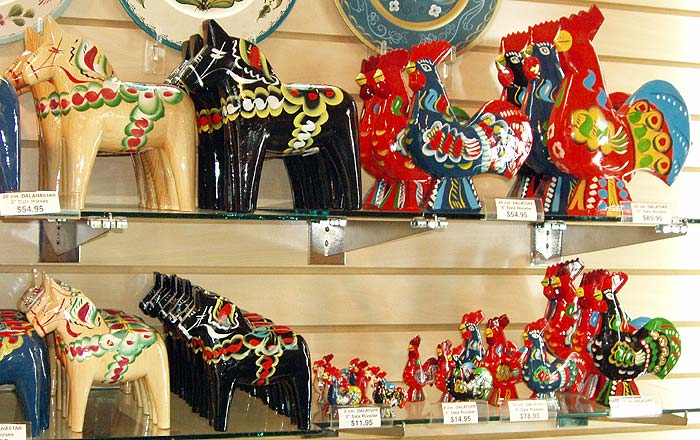 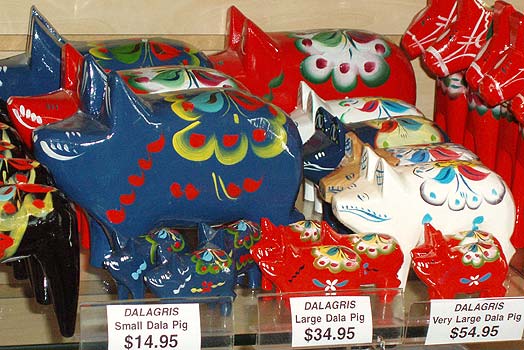 Tourism is hungry work, so breakfast is in order. Small town independent cafes often furnish nice visuals; this is The Cookery. 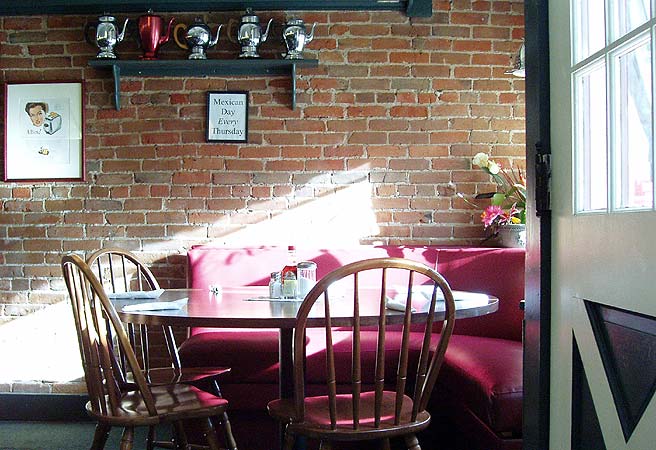 Ace considers what disguise he'll use to observe life in Lindsborg. This is his first attempt - a shirt with a Sweedish flag sticker. It won't quite do, though.

Of course, the answer to Ace's question of disguise is obvious. Dala horses are everywhere; nobody will notice one more. Yes, have yourself painted as a Dala amimal and they'll never know you are not just part of the landscape. For this task he choses the artists of Hemslojd. Ace is a dedicated litle infiltrator, so he sheds his fur and begins the process. 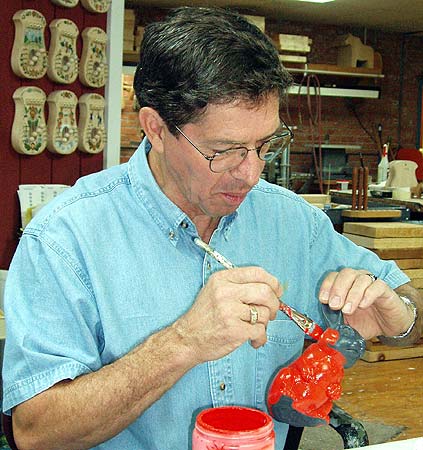 As Ace's undercoat dries, he regards a line of the signs Hemslojd makes for sale. 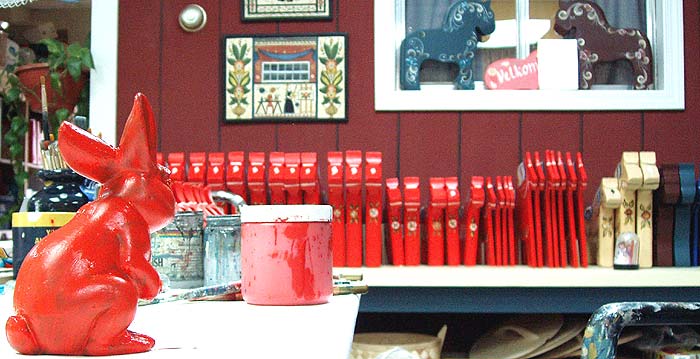 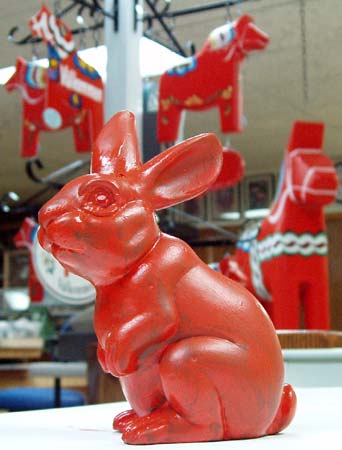 He isn't the only thing drying.

Virtually the entire ceiling of the workshop has been signed by visitors. One particular tile holds illustrations from two Disney artists, one Time Magazine illustrator and a Dala horse from a Swedish craftsman. 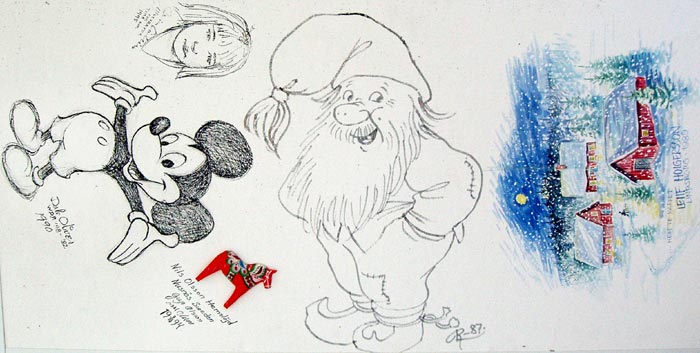 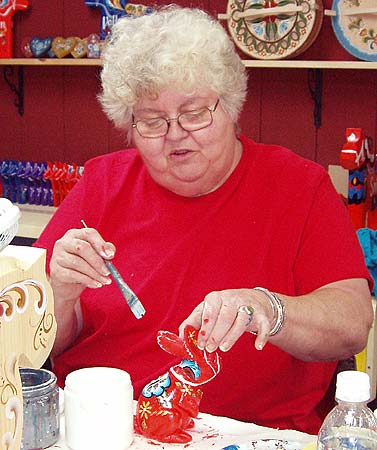 While Ace dried, I took a stroll around town. You know you are in Lindsborg when there is a pile of viking helmets in the toy store window. This is Main Steet Toys.

I didn't think it could ever happen: a Dollar General sign that I like. The chain is about the worst at proliferating backlit plastic rectangular banality, but this one is different. Doubtless it was once something else, but at least they didn't take it down and put up their standard sign. 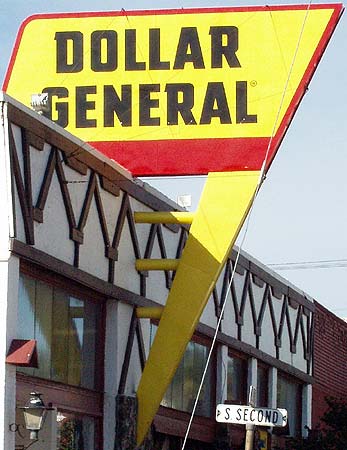 I've gotta love a town that has a public mural in honor of architects - not war heros or dead presidents - architects. Can Utopia be far behind? 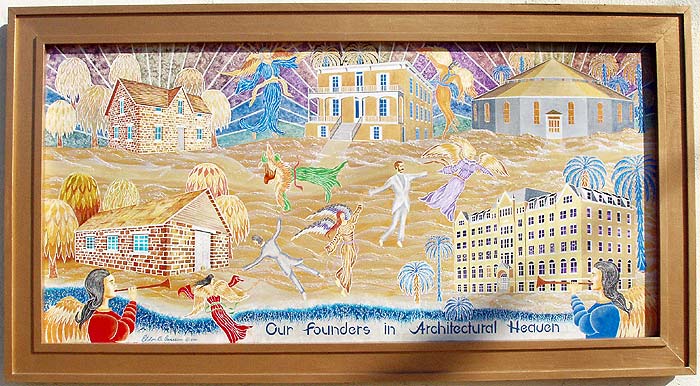 The timing of our arrival in Lindsborg is advantageous; in the next few days the town will celebrate Svensk Hyllningsfest (translation: "honoring Sweden"), a city festival held every two years. Here, a band - high school, I presume - passes in front of Hemslojd. 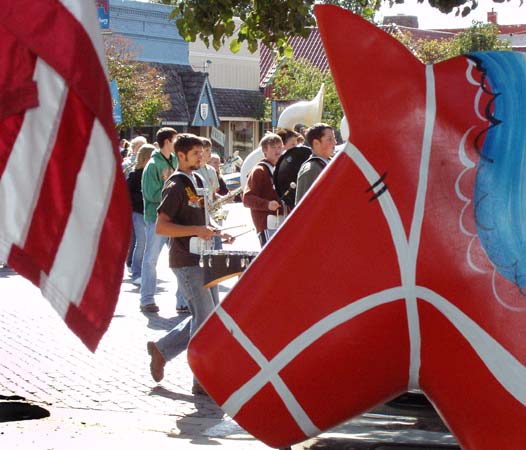 Ace has dried now, and is eager to test how well he will blend into the town. Yep, perfect camoflage - nothing unusual here. 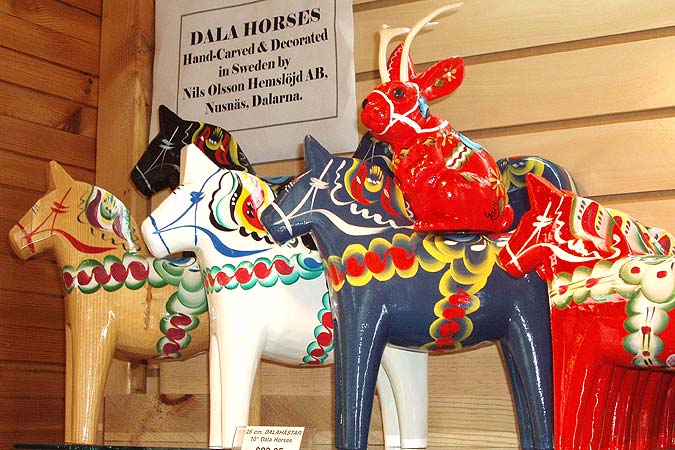 Lindsborg high school students practice for a Svensk Hyllningsfest performance as Ace takes his first stroll as a Dalalope. 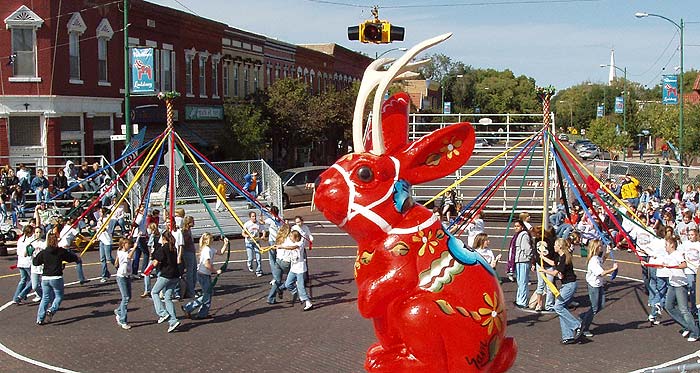 Why thank you, nine ah! You bring a smile to my face...which helps crack off some of that red paint so I can go on about other business. You know, were I to walk down the street of a town other than Lindsborg in all this body paint, I'd invite stares.

Very nice. I haven't ever seen a jackalope like that.

My fellow Scandinavian-o-philes, PLEASE do your research on those Viking helmets! Our ancestors did not, repeat not, attach horns to their helmets. Wagner created the horned helmet for his operas. Genuine Viking helmets are conical in shape and have a nose guard, but no horns. Keep up the marvelous jackalope humor!