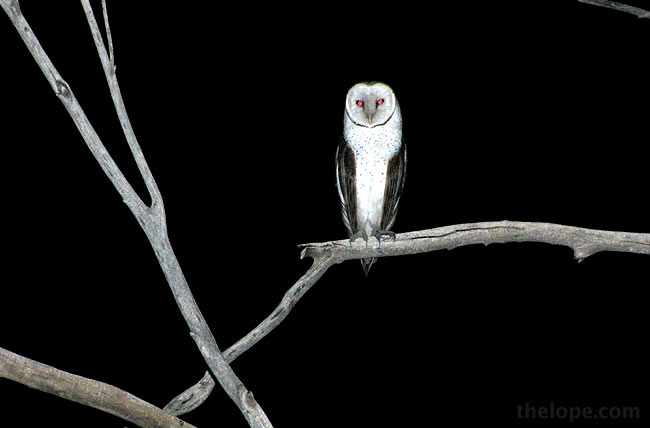 It didn't start as a night trip. No, this road trip was supposed to start at 2PM this past July 8, but things happen and before you know it it's eight o'clock. So be it - time to trust in serendipity and hit the road.

The gods of travel take special care of those on old highways such as US 50, and that was the path of choice for a friend and I - west out of Hutchinson Kansas and bound for somewhere in Colorado. Our goal was to attend a concert in Denver on the 12th and photograph a whole lot of cool buildings, scenery and cicadas on our rather circuitous route.

8:52 PM - pleasantly striated clouds complement the setting sun as it silhouettes irrigation equipment along US 50 near Stafford, Kansas. This was my first shot of the trip; I was also testing a camera, the Canon SX1IS, and wanted to see how close this less-expensive alternative to a DSLR could come to DSLR performance. 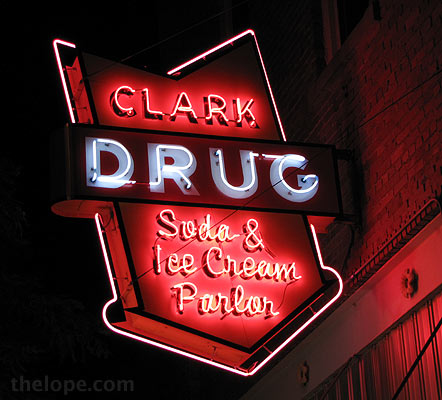 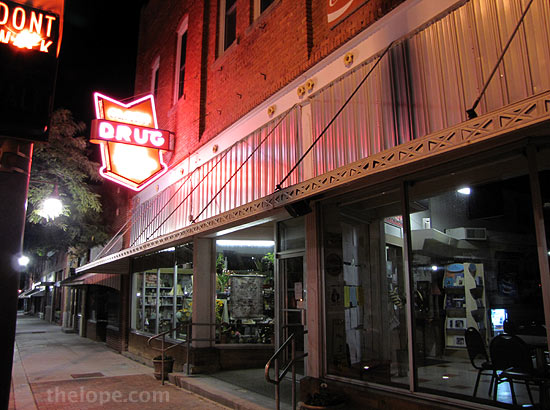 I've been here a few times before and know what treasure waits behind those locked doors. Aye, there's a soda fountain here and it's an old one, too. 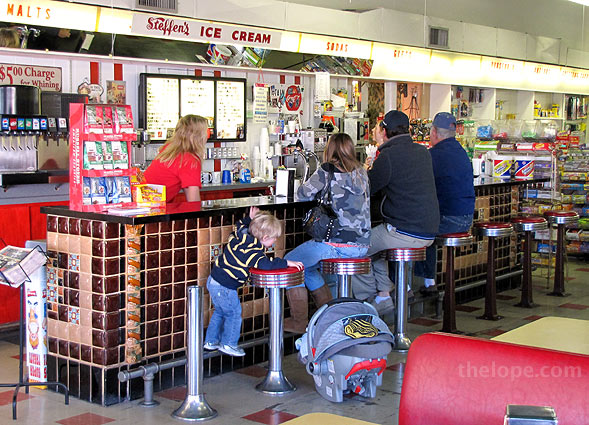 Flashback: I'd visited Clark Drug back in February and poked around looking for dates of manufacture on the counter. I found a patent date of November 22, 1927. Though parts of it are hybridized with a later counter, most of it is similar in construction to one that used to grace Fraese Drug in Hutchinson, Kansas, when that business was in the now-defunct Wolcott Building, before Fraese moved to the oft-controversial Wiley Building. 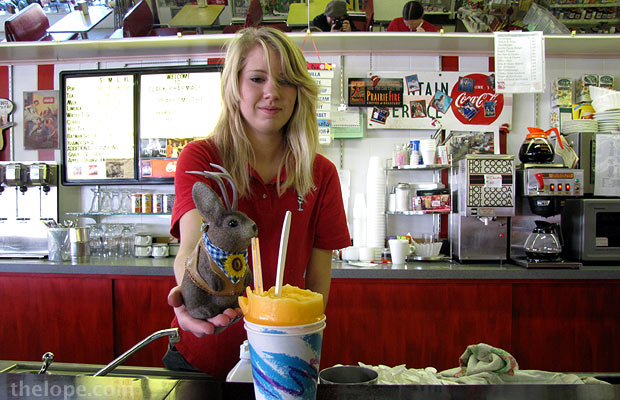 Back in February, Ace partook of an Oprah smoothie - a drink named for the talk show queen after she ordered a smoothie of this type on a stop here during cross-country trip a few years ago in which she had a bit of friction with the Kansas beef industry. 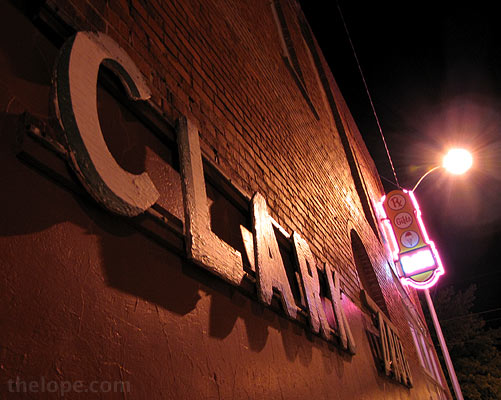 But now it's 11:43 PM, five months later. There'll be no smoothies tonight. 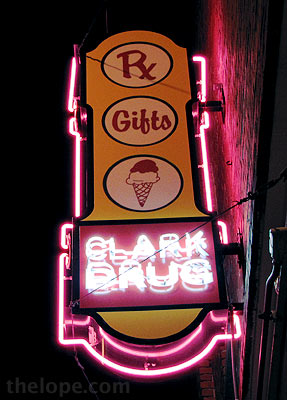 Here's one more Clark Drug sign - this one on the US 50 side of the building. 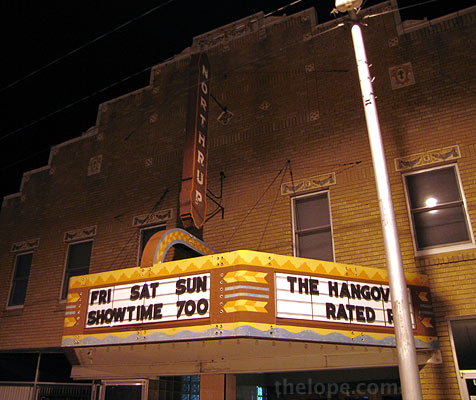 12:10 AM: Syracuse, Kansas - It's actually been almost an hour and a half since Cimarron, but we've crossed into the Mountain Time Zone now.

It's a funny thing, you see, the Central/Mountain time border follows the Kansas/Colorado state line at the north and south ends, but Mountain time juts out in a roughly bordered rectangle to claim a strip of Kansas about 20 miles wide for about 90 miles of the border. Why? I have no idea.

The Northrup Theatre is the first thing I shot in this strip of what I like to refer to as "Kansas Mountain Time". Despite changes within and without, the Northrup has remained open for all but a few years since its opening in 1930, when 35 cents could buy you a flickering refuge from the depression. I've read the interior is Art Deco. Oh yeah, a day trip is in order.

On a trip out here this past February - also a night trip - I'd shot an old hotel sign and a former gas station in Syracuse. Both were still there when I passed through on the trip now being documented. 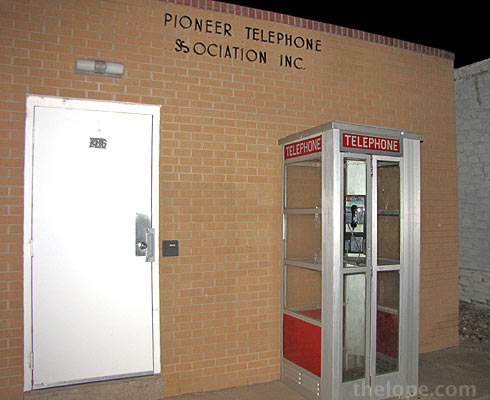 12:28 AM - An honest to goodness phone booth waits outside the Pioneer Telephone Association in Coolidge, Kansas. 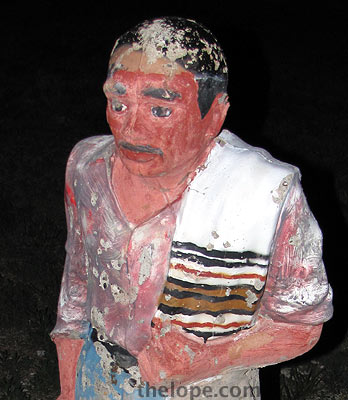 Close by, a concrete Mexican stands guard next to the Border Town Trading Post. 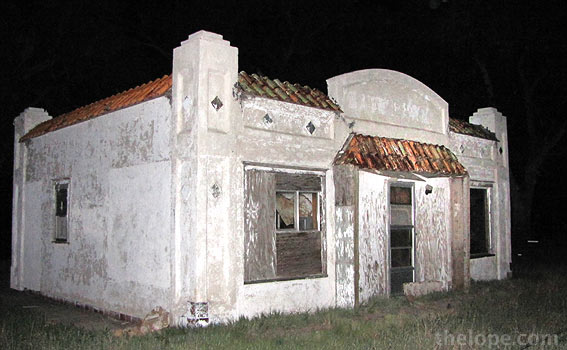 12:40 AM and we're within yards of the Kansas/Colorado border: I was intrigued by this structure - an old gas station or motel office, I am thinking.

While I was photographing the building, I apparently trespassed on the territory of two barn owls. In the middle of the night an unexpected SCREEEEE! and a large pair of wings swooping in from your peripheral vision can be startling. Not being too terribly bright, I tried to provoke them by moving further from the road so that I could try to get a photo of them in the air. That didn't work due to the camera's inability to focus on a moving target in moonlight, so I decided to try and get a shot of one when it perched in a tree. 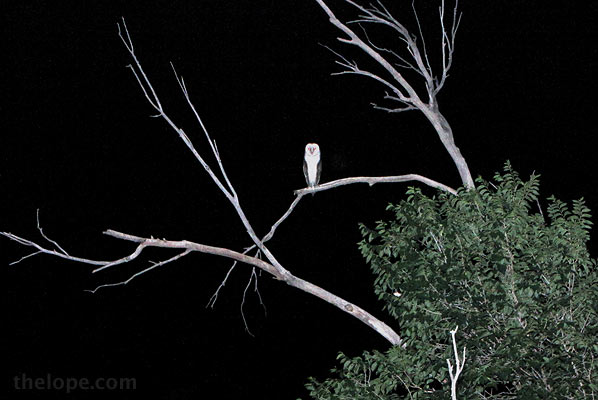 That worked - eventually. The hot shoe on the SX1IS was valuable because I needed the power of my old Vivitar 283 flash to throw that much light, and even still this is at ISO 400, f:4.5.

The problem was focus. Auto focus couldn't home in on the owl or the tree branches; I even tried the auto focus assist beam to no effect. This is a problem with the SX1IS and its less-expensive sister, the SX10IS - neither seems to be able to cope with dimly lit subjects even if there is a lot of contrast. I switched to manual focus but found that manual is a stepped process for the SX1IS and the owl was between two steps, so I actually had to change my position to get the bird sharp as I could.

But about the owl: the Barn Owl (Tyto alba) is typically about 18 inches tall and has a wing span of over 40 inches. It sees better in the dark than almost anything but its hearing is also used to home in on its food - rodents, mostly - but it'll also take insects, snakes, lizards, frogs, crayfish and, rarely, another small bird. Fortunately for me, it doesn't take fools with annoying cameras at 1 AM.

This view, also used at top, was shot at full zoom, 35mm equivalent 560mm, ISO 800, f:5.7 (maximum aperture for the lens at full extension). I was really lucky the owl stood still for the 13 minutes it took me to toggle the focus, wait for the resultant image to display, then try something else. 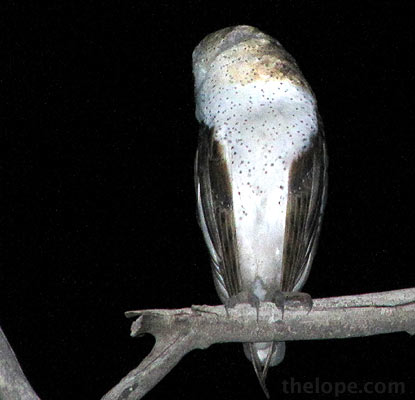 At this point, a plane was flying over and the owl actually turned its head well over 90 degrees to track it. 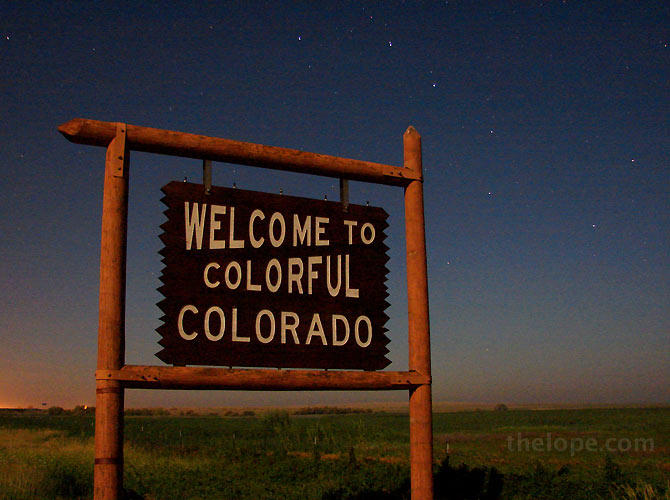 1:13 AM - Within a few yards of the old building and the owls lay the border between the Sunflower State and Colorful Colorado. The big dipper took a scoop of night sky behind the welcome sign.

More technical stuff; sorry about that for those not interested, but believe me, people who are camera shopping for a super-zoom point and shoot (also called bridge cameras) want to know this stuff. I made the unpleasant discovery at this point that the Canon SX1IS does not have the 15 second shutter speed available in manual mode like the SX10IS does. In fact, its longest shutter speed in manual is one...yes one second. That's crazy.

The camera does have up to 15 seconds available in one of its specialized modes - "long shutter" in the "scene" mode - but in that mode the camera picks its own choice of ISO and mine seems to always pick 80. Again, this is nuts, and quite insulting to anyone who knows their way around time exposures and just dropped a few hundred bucks. Fortunately, I had brought one of my previous cameras, a semi-functional Sony DSC H2 along, and was able to use its 30 sec shutter speed for this shot. 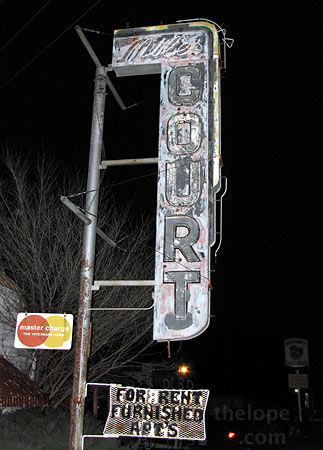 Along any highway there are strewn signs of former motels like this one in Holly, Colorado. I can't read the neon on this one for sure - "Niles Courts" or maybe "Miles Courts" - but what struck me was the Master Charge (not Master Card) sign. (photo from a previous trip in February of 2009) 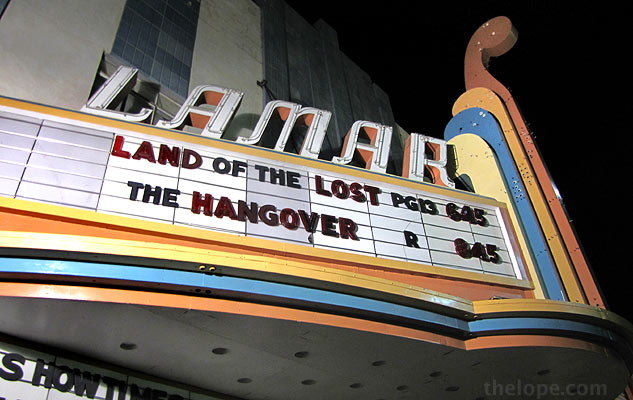 3:21 AM and we're in Lamar, Colorado. The Lamar Theatre opened, according to Cinema Treasures, in 1946 and is Art Deco within and without. 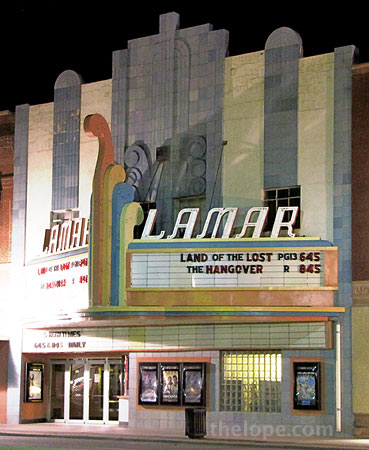 One could make a most enjoyable trip out of a connect-the-dots tour of towns with operational classic theatres. Here's a shot of the theater I took back in February when I was through Lamar early enough to catch the neon lit. 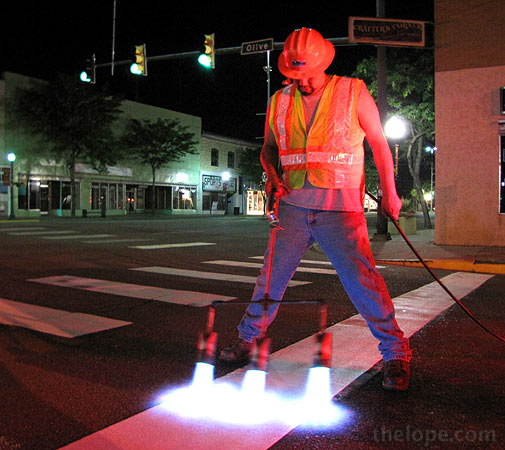 At Olive and Main streets, a road crew is melting white strips onto the pavement.

The workers explain that these plastic strips contain glass beads for reflectivity. 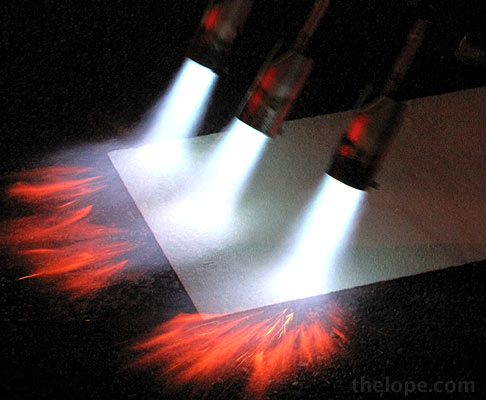 The strips are melted into place with what I am told is called a trident. Cool!

Now think about this: these guys are being paid to burn plastic stuff on Main Street in the middle of the night. So...when I was melting all those plastic soldiers in my childhood back yard, I was learning a useful skill. I always knew that. 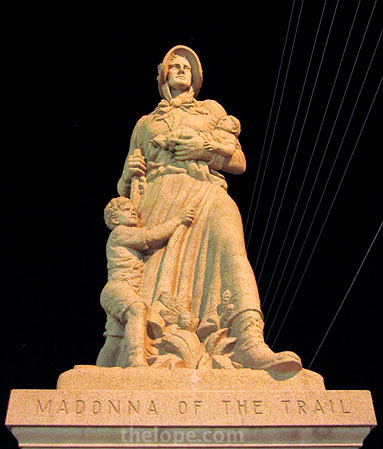 Kids like the one commemorated in this statue never saw plastic. This is a Madonna of the Trail statue. In 1928 and 1929, the Daughters of the American Revolution placed one of these statues in each of the twelve states through which ran the National Old Trails Highway. The original was sculpted by August Leimbach of St Louis. 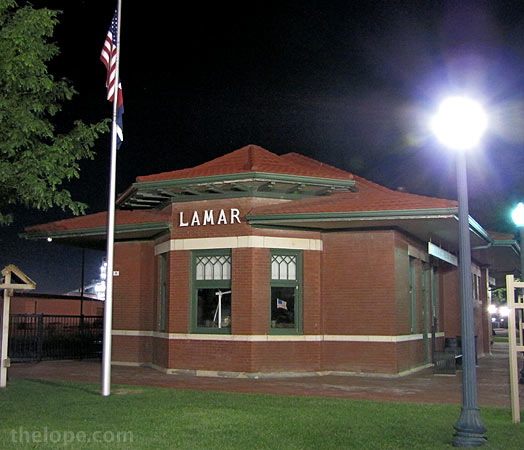 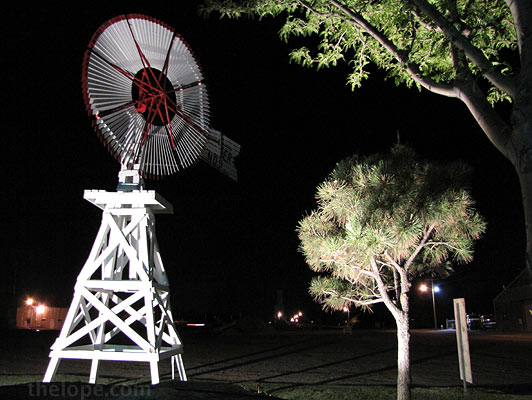 A number of relics are displayed near the depot. 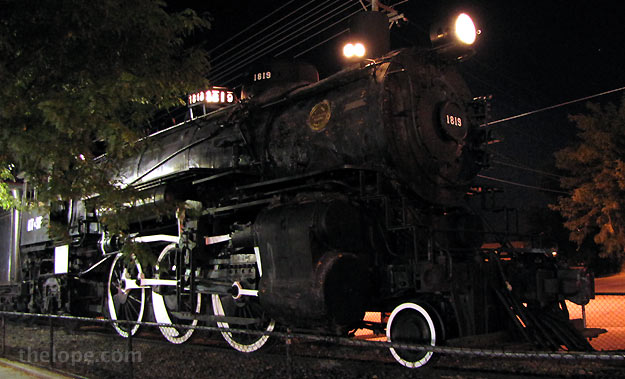 There is a preserved steam locomotive here. It is the only one I've ever seen rigged with working lights; that was a nice touch. 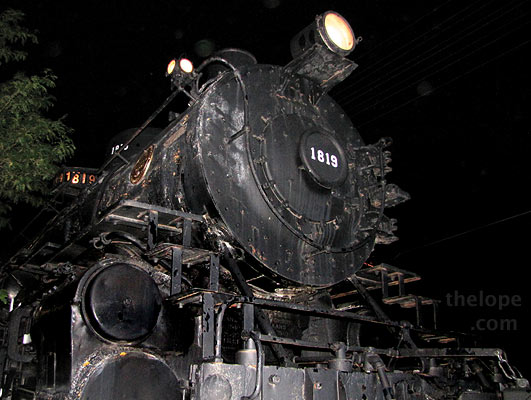 A nearby plaque gives the facts on Santa Fe steam locomotive number 1819, a product of the Baldwin Locomotive Works from 1906. It was retired in 1953 after logging 916,626 miles in Missouri, Kansas and Colorado pulling freight and passengers.

Here in the middle of night, I remembered a presentation about Peter Tellin, a deceased resident of Hutchinson Kansas who was a Santa Fe engineer in these parts until 1912. I wonder if he ever plowed this thing through deep snow drifts. 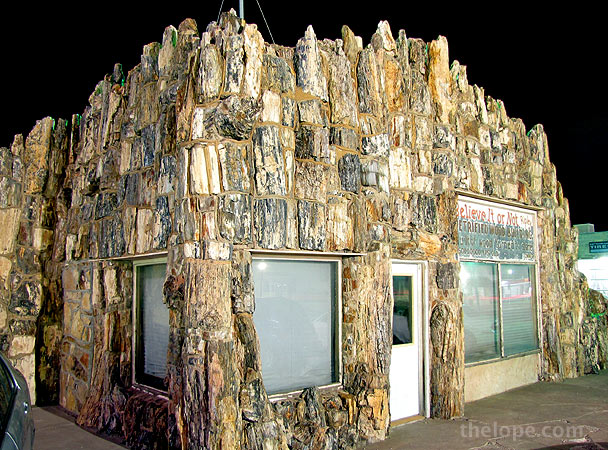 The best piece of roadside treasure in Lamar is one I shot on a trip back in February, but I'll use the pictures here. Much of this former gas station is made of petrified wood. 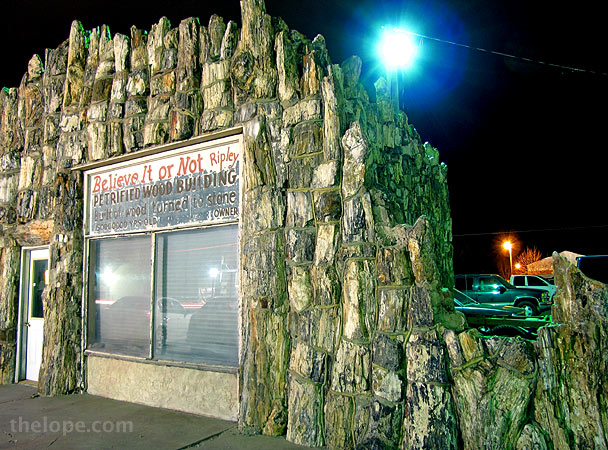 The hype for the building doesn't mention that only the front and sides are of petrified wood. Unfortunately, there were many cars parked around front, resulting in these odd angles. another shot 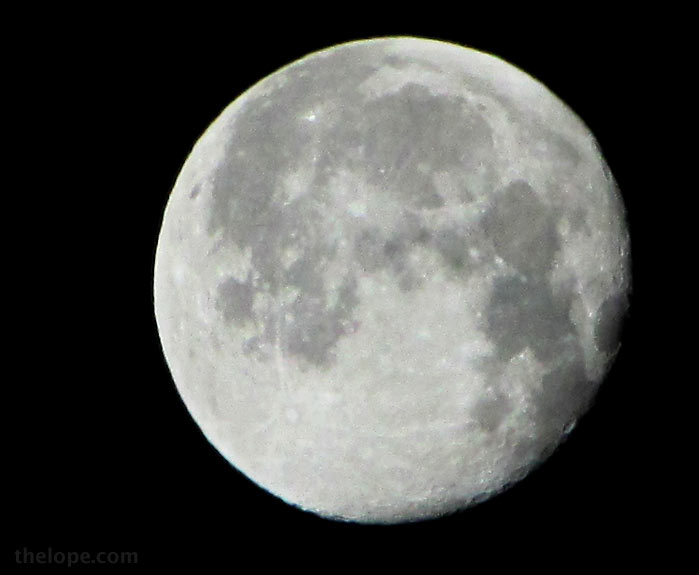 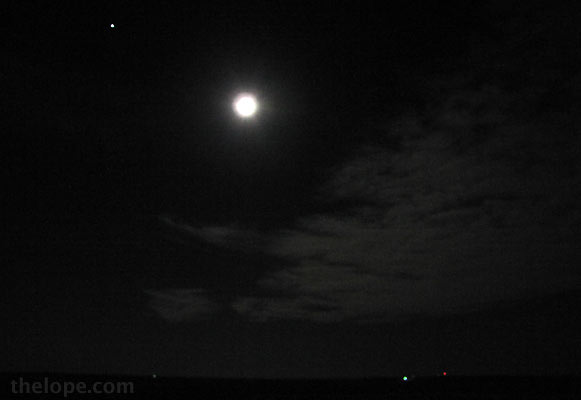 4:39 AM, east of Las Animas, Colorado on hwy 50 - I liked the clouds. They would have looked better with a longer shutter speed than the SX1IS' one second, but the area of the sky with the moon would have over-exposed even more due to a light haze. Shortly after this, we bid farewell to the road and settled into adequate lodgings at The Best Western Bent's Fort Inn at Las Animas, Colorado, which we reached at 5 AM.

Oh, our distance was 314 miles, according to Mapquest, which says it should take five hours and 34 minutes. It took us ten hours. Obviously, Mapquest doesn't stop and take pictures...too bad.

posted by Ace Jackalope at 6:34 PM