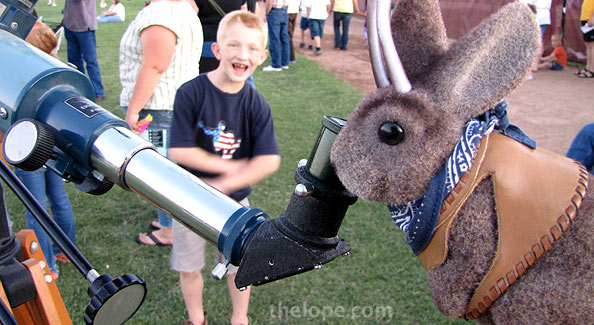 The young man in the background acts like he's never seen someone look through a telescope.

Tuesday was the 400th anniversary of the day Galileo presented his customized, souped-up version of the already-invented-by-someone-else telescope to the senate of the city-state of Venice. He was rewarded with a nice raise and some tenure, and we in turn were rewarded when he changed his take on the device from a commercial and military tool, and decided to look at the night sky.

The public was invited to bring their telescopes and partake of expert help in using them. 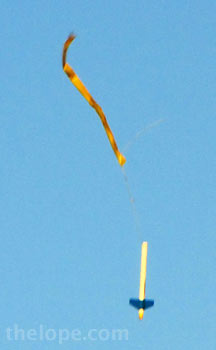 An estimated 900 people came for just that, as well as model rocketry demonstrations.

This young man shields his eyes from glare as he tracks a model rocket. 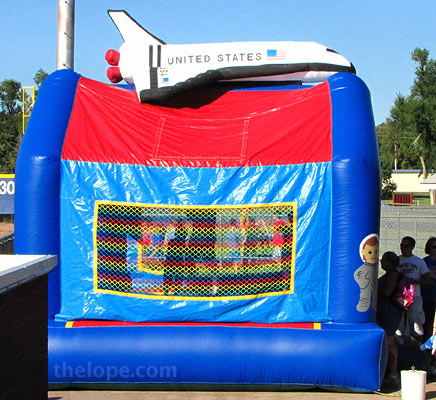 There was also a lecture by Martin Ratcliffe, contributing editor to Astronomy magazine, and activities for the kids like this "moon walk" attraction. 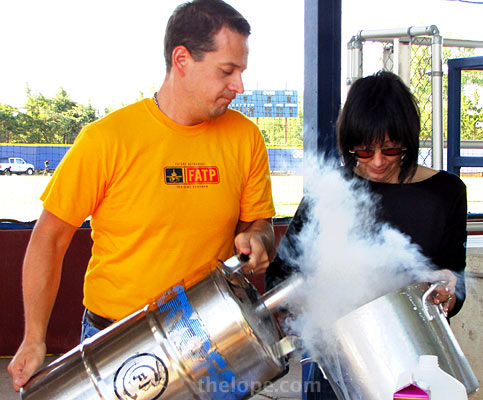 Oh, and they served free liquid oxygen ice cream. It tastes good, but the real attraction is in the making of it. Billowing clouds of fog improve anything - concerts, Halloween, ice cream. Politicians with dull speeches should use fog. 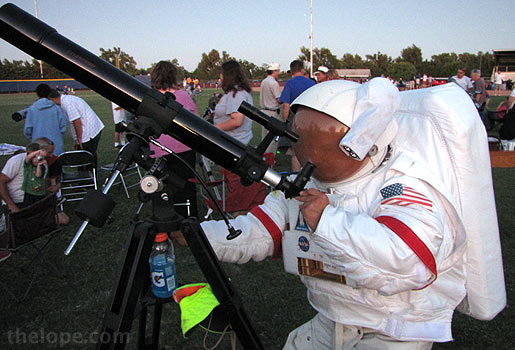 The Cosmosphere also had a guy walking around in a space suit. Maybe he's trying to see where he parked his lunar rover. 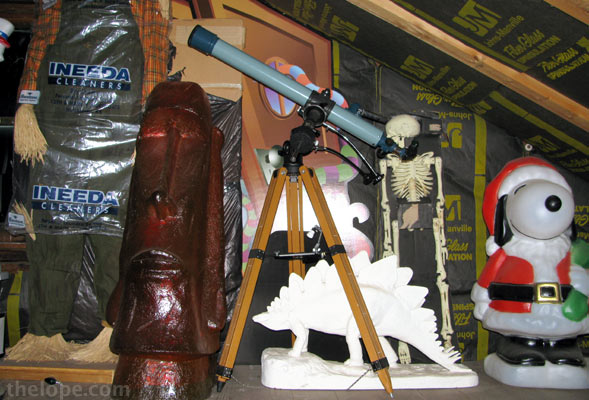 When I first arrived at the event, I had not brought my telescope. It was languishing in my attic where it had sat for over ten years, amid the flotsam and jetsam of an ordinary life.

Now, the telescope has a story. My parents ordered it from the Sears Christmas Wish Book for my brother and I back in 1974. What they actually ordered was a much less elaborate model at $70. Back then, in what was apparently the golden age of customer service, when Sears didn't have what you ordered in stock, they sent you something higher up the price scale of whatever you were seeking. And so it was that we got this much better model. It brings to mind a "Miracle on 34th Street" scenario of a salesman at Macy's telling us that Gimbel's had just the thing.

Much the the same thing happened another year when I got a microscope for the pond-water zoo in a petri dish that every adolescent boy had...didn't they?

So, I brought out the old telescope. Though this was somewhat like driving the old sensible family sedan to a car show, I didn't care. It was a beautiful moonless night and I wanted to see something. 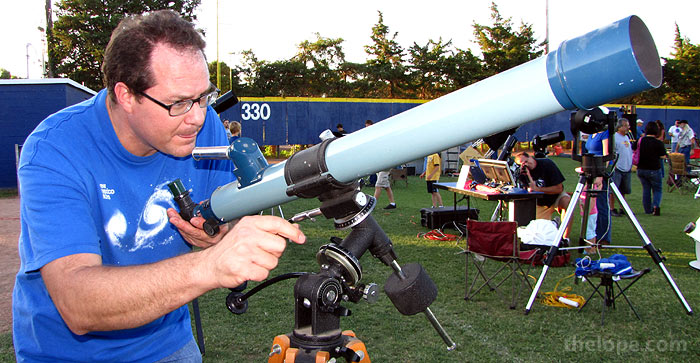 The old scope immediately attracted some attention. Todd Tuttle, President of the North-Central Kansas Astronomical Society in Manhattan, helped me set it up. 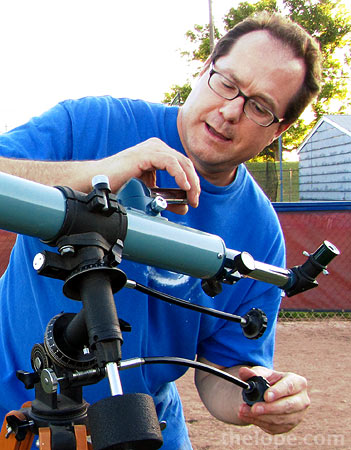 Todd was surprised at the viewfinder worked like that of an SLR camera in that a mirror is flipped out of the way with a knob when you are ready to use the actual telescope. 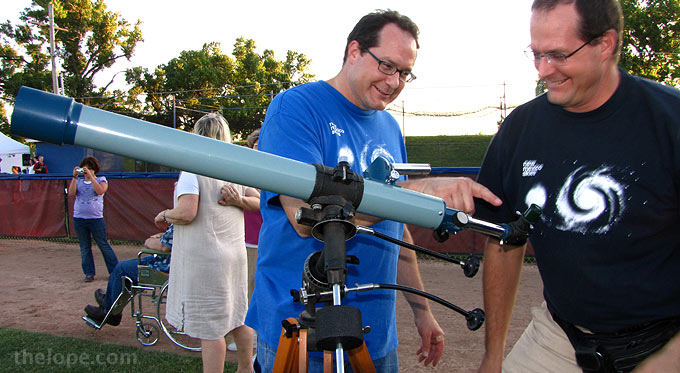 Todd invited his brother, Tracy, over to have a look at my sort-of-antique. I was wrong in my analogies earlier. It was more like I brought a Red Rider BB gun to a gun show. 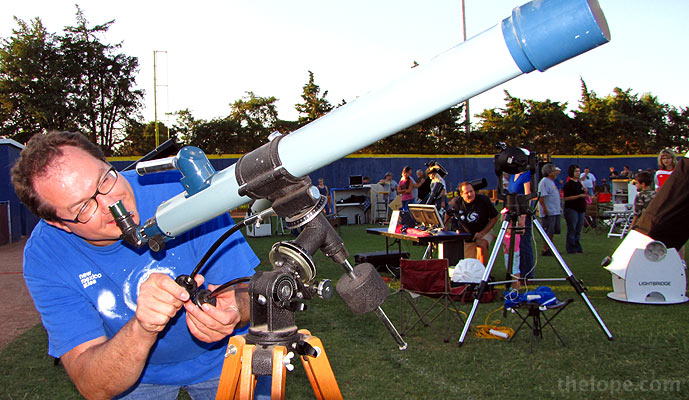 Todd left it fixed on one of the stadium lights, but I easily found Jupiter and its moons later. After dark, a line formed to see through my scope. It was blast seeing kids look at Jupiter as a disk rather than a dot. If this is what teachers and parents sometimes feel, I can see the satisfaction. 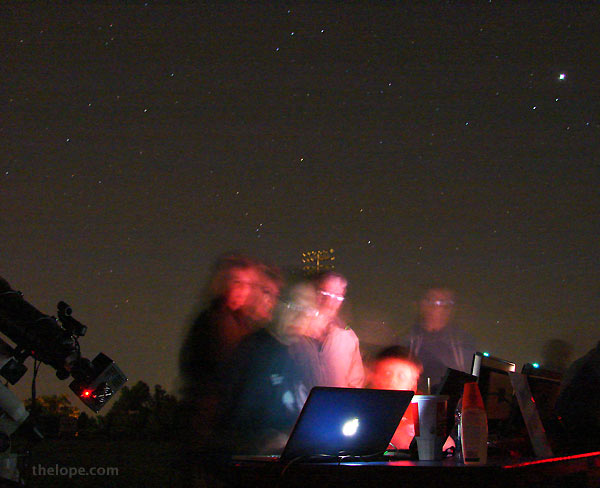 Tracy brought his own rather elaborate equipment and that's no surprise as he is Director of Mabee Observatory and Assistant Professor of Physics at Bethel College in North Newton, Kansas. Here, he uses laptops to show the public images of distant galaxies and nebulae shot live with the camera at left. Pretty fancy and impressive, but I bet he didn't pay $70.


Kinda funny - I'd lost interest in the old telescope long ago when the first planetary probes sent back images that blew away what I could see through it. And now, little kids could be amazed by the thing again. I'll sure be at the next such event.

I wonder what's in the sky right now?

posted by Ace Jackalope at 9:54 PM

You certainly have some interesting "flotsam and jetsam of an ordinary life" in your attic!