The Lope: Who Watches the Watchmen?

Who Watches the Watchmen? 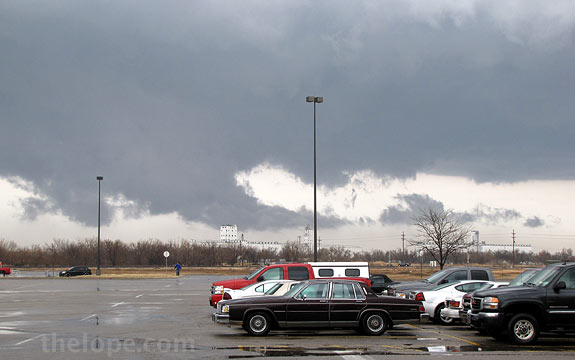 We did - until an unplanned intermission. About halfway through the movie, the lights went up, the film stopped and a theatre employee walked in and told us that a tornado warning had been sounded and that we'd be shown to the attached Hutchinson Mall's tornado shelter. The walk to the shelter required going outside (? yeah, I know) so we saw the storm - a wall cloud, I believe (above two photos), but the tornadic activity was either past or not visible. There are reliable reports of four tornado or funnel sightings in or near Hutchinson, so this wasn't an unwise exercise. Fun with storms (L-R) - Mark, Terry, Sharon and Patsy point at nothing.

After a few minutes, a theatre employee ushered us back inside and the show continued.

I recommend the Watchmen movie to even hard core fans of the comic. The one major change I spotted totally made sense. It reminded me of the Lord of the Rings Movies in that it was caringly rendered.

It's a violent flick, though. However, said violence does serve character development and is not merely gratuitous.