The Lope: Six Minutes to Midnight... 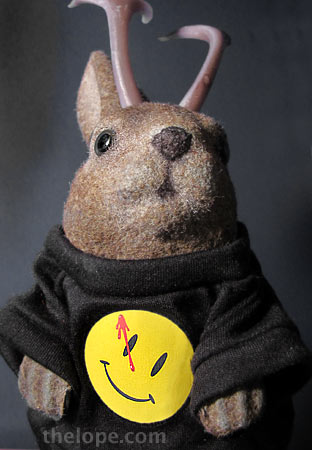 ...that's when I should have been in my seat for a midnight showing of Watchmen early Friday morning, but things worked out fine as I'll see it this weekend with Patsy and Mark.

And that my old newspaper buddy Mark should be with me is fitting. I remember, back when the twelve-part comic was released in 1986 and 87, how we'd go to my apartment after work and digest each precious copy in silent reverence as if it should be held in white-gloved hands and read in the antiquities vault of a museum as "Codex Watchmen."

I'm in a great fame of mind for the movie as I haven't read Watchmen in over 20 years and remember only the dark mood of it, without many specific details. This means I can still be in suspense during the show.

I have recently read up on Alan Moore, my favorite snake deity worshiper who used to be in a poly relationship with two women. Yeah, he's interesting.

In addition to writing comics, Moore is also a magician and described himself in a New York Times article as "I am what Harry Potter grew up into and it's not a pretty sight."

posted by Ace Jackalope at 5:33 AM