Last night many of us were treated to a total eclipse of the moon. Read about it in astronomy.com. Of course, I had to stay up and shoot it.

3:38 AM - The tell-tale darkening at top. Already, contrast and exposure choices influence just how eclipsed the moon looks.

4:06 AM - This is the point at which I always wonder how freaked out various civilizations may have been during eclipses. At the same time, I think we've lost something in living so insulated from the sky.

4:34 AM - It's noticeably darker outside now. Neighborhood dogs were barking like crazy. I'd love to attribute that to the eclipse, but it may have been due to people walking outside to see it.

4:43 AM - Not yet fully eclipsed, exposure for the darkened part burns out the remaining sunlit portion, leaving the moon looking like a red egg in an egg cup.

4:49 AM - Exposure for sunlight shows the last remaining spot of sunlit moon.

4:50 AM - Just a moment away from totality, the light hitting the moon varies greatly in color balance.

5:31 AM - Well into totality, the moon is in Earth's shadow and mainly red light is able to reach the moon. Camera exposures are now a balancing act between the noise of higher ISOs and the blur of lower shutter speeds. I think this one is ISO 200 and 2 seconds. It's a bit underexposed, but a contrast adjustment in Photoshop helped.

6:24 AM - Pre-dawn twilight has arrived and I'm about to lose sight of the moon in my neighborhood of mature trees and tall houses. It strikes me as looking like an alien planet with a polar ice cap.

6:46 AM - The sun would not rise until 6:57, nor the moon set until 7:04, but the moon had already disappeared behind trees in the city. This is a view from a break in the trees during a drive south of Hutchinson. It would be sharper had I stopped and used the tripod, but by this point I had what I wanted, and I was kind of fond of the blurred trees.

First off, I'm not an expert at astronomical photography, far from it. I'm just someone who like so many of you, has a camera marginally capable of enabling some fun with astronomical events.

I used my Sony DSC-H2 (my fifth one in less than a year) on a big heavy 1950's era tripod. I'm a fan of such tripods for non-travel use. Even still, you can get a bit of camera motion if the camera strap or a hanging lens cap catches the wind. This is especially true in places like Kansas, so I usually wrap them around the handle of the tripod head.

The camera was set at its maximum zoom (a 35mm equivalent of about 320mm), metering was "spot", white balance was set at sunlight and focus was on manual at infinity. The ISO was 100 at first, as the full moon is a sunlit object and shutter speeds are quite high. Shutter speeds fell as the eclipse neared totality and the aperture stayed at its maximum of 3.7 for those shots. During totality, I also tried various ISOs and bracketed (tried lots of settings) a lot. Shutter speeds ranged from 2-8 seconds, though all speeds yielded some blur. There are devices that prevent blur by turning a camera with the position of objects in the sky, but I've never invested in one.

I stayed in town (Hutchinson, KS) to shoot these as the city light pollution would not be much of a problem and I'd recently hung out all night north of town to see a meteor shower.

I kept thinking of an odd song: all night long...I couldn't get Joel Veitch's We Like the Moon off my mind. We Like the Moon, yes we do. And having a transparent, breathable atmosphere is also pretty cool. 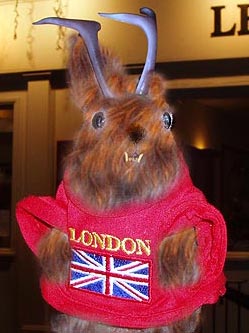 Do lunar eclipses confuse werewolves and werelopes? That's what I want to know.

I'm glad you photographed this event. I really wanted to see it ... but you know how that early-morning thing goes for me. lol. Thx. And Werewolf in London, huh? Cute

I'm glad you photographed this event. I really wanted to see it ... but you know how that early-morning thing goes for me. lol. Thx. And Werewolf in London, huh? Cute

Ace is that you behind those big teeth?