The Lope: Some Sheep and a Poem

Some Sheep and a Poem 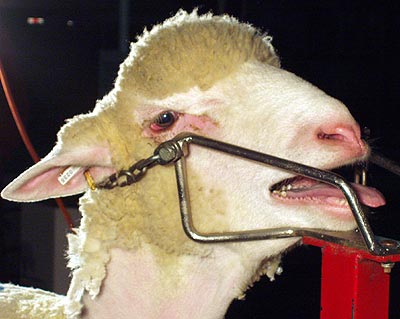 A friend with whom I'd roamed the Kansas State Fair, called a little bit after ten PM the other night as she was passing some agriculture buildings on her way out. She had noticed that a sheep was being sheared and thought we'd both find it interesting; that's why we get along so well. 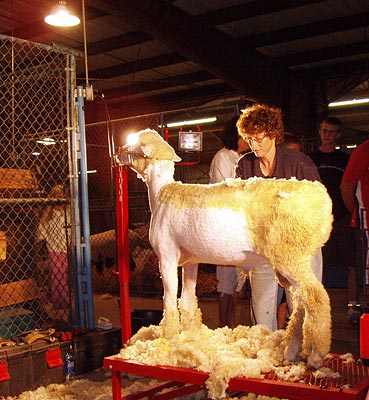 Now, I'm a small town boy, but not well-acquainted with farm life. This being the case, I enjoy the agrarian aspects of the fair and often park in the lot across Plum Street just so I'll walk through that same concentration of agricultural buildings and maybe see something new to me. Newness this night came in the form of a nice woman named Carolyn, of the Newton, KS area, who was shearing a Dorset sheep for her son, Aaron, who was off at college. 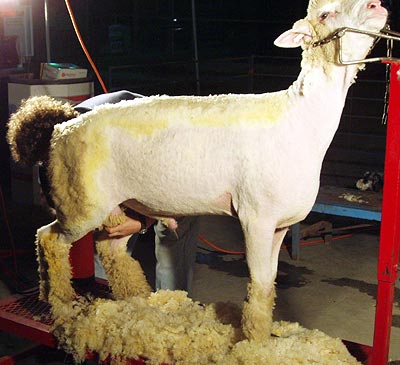 I arrived just before a delicate moment; apparently, when you shear a sheep, you shear all of the sheep. Although professionals use a clipper with nine flared teeth so they can work at a zippy pace, amateurs tend to use one like Carolyn has, with 20 teeth. This means she is less likely to cut the sheep; I'm sure he'd be appreciative at this particular moment. 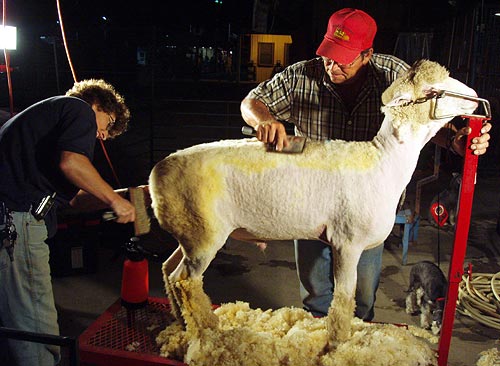 Carolyn's friend, Larry Cramton of Stillwater, helps her "card" the sheep. Short-bristled brushes, similar to what you might use on a dog or cat, are used to remove the remaining hair; the animal reacted much as if this was a massage. He certainly deserved one. 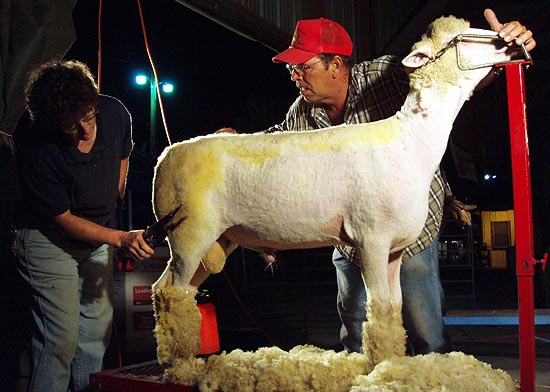 This part of the process is a fine trimming called "blocking" and is performed with large scissors. Carolyn and Larry are concentrating on the right side of the animal because it is the "show side." That is to say, while the sheep is being judged, the handler will be holding it on the left side so the judge will see mostly the right side. 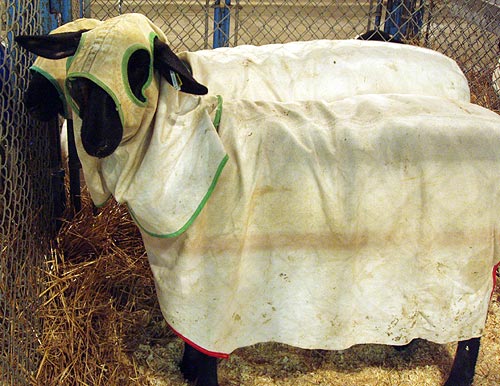 While my friend watched and asked more questions, I wandered off and shot pictures of the other sheep, which I was surprised to see wore clothes. 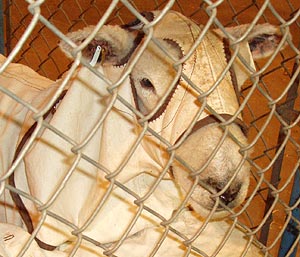 My first impression was of Mexican wrestlers in a cage match...except the sheep were pretty much docile. 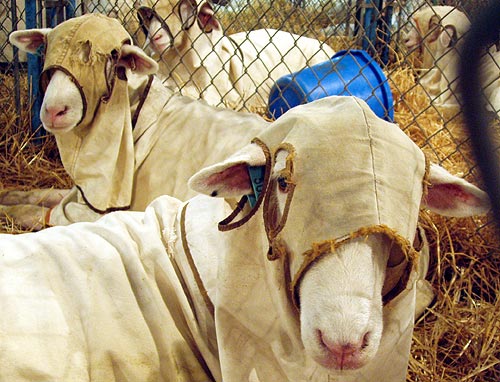 But if they are docile, how'd the one in back get that hole in it's hood? Every year at the fair, I seem to have one moment of Monty Pythonism. I seem to recall something in Python about killer sheep. Perhaps sheep don disguises at night to go wreck havoc on Greek restaurants. Hmm...maybe that's why Hutchinson never has one. 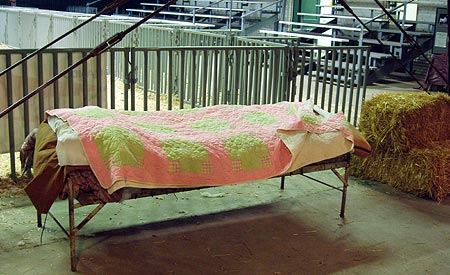 It's not unusual to see cots in these buildings. People who have animals entered in the fair sometimes sleep here.

Sometimes the preparations are more elaborate. 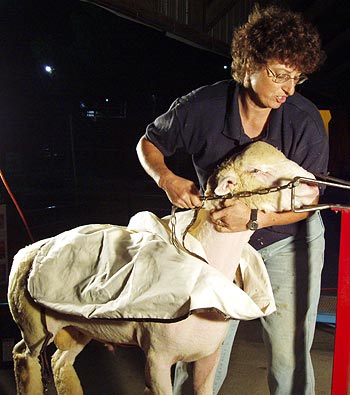 Back at the other end of the building, Carolyn has had to unhook the sheep's restraints to apply it's cloak. It (it doesn't have a name; I asked) is thinking now might be a good time to leave, but she has other ideas. Carolyn nixes my Mexican wrestler or killer sheep theory by telling us the covering is to keep them clean for judging. I still like my theories better. 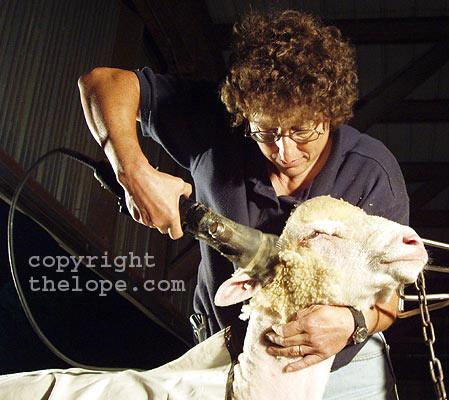 Now it's time for the head to be shaved, carded and blocked. So much for the 80's hair look. 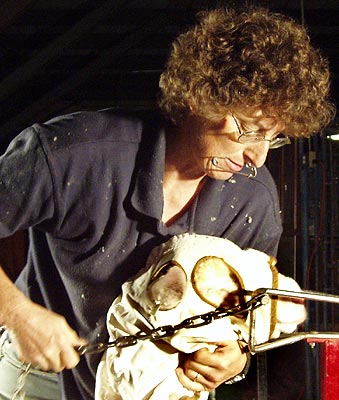 Time for it's hood. 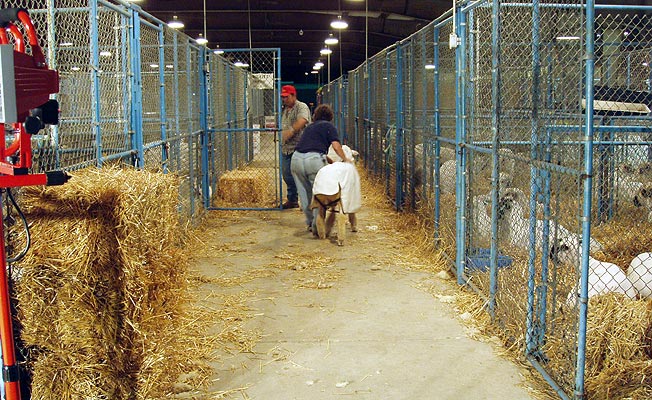 Carolyn and Larry, satisfied with their work, put our new-shorn friend to bed. 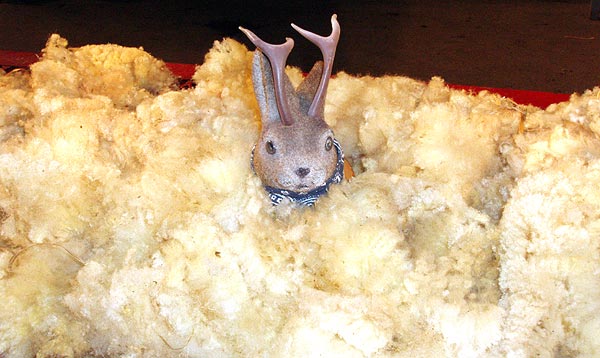 Ace Jackalope enjoys diving into the sheep's former covering. The wool is too short to be used by knitters, so it is thrown away. 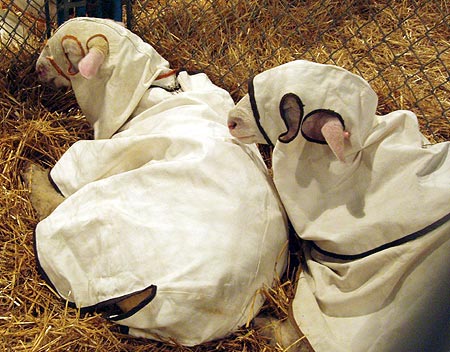 OK, tell me they don't look like hooded vigilantes. Perhaps they're plotting against this display in the Kansas Sheep Council booth:

The last few nights I've not left the fair until everything was pretty well shut down. There's a certain small-town ambiance then, like Main Street after a festival when the cacophony has died away and you can hear individual footsteps going home. It's quite pleasantly reflective, if you don't mind the occasional sound of a patron who's enjoyed the beer garden too much.


And now for something completely different: 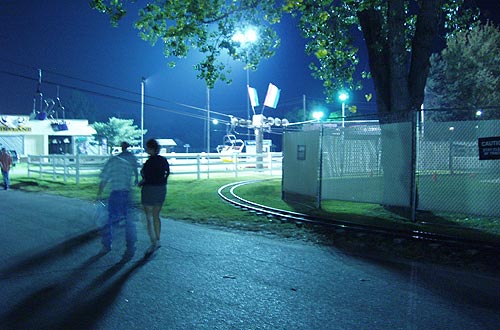 Goodnight to the lovers that walk in the lane. 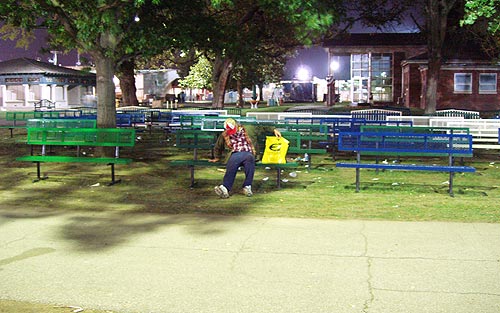 Goodnight to man, asleep on the bench. 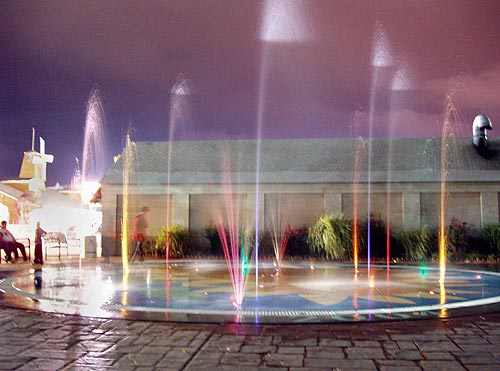 Goodnight to the water, now all down the drain. 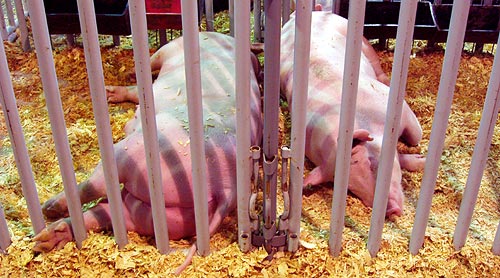 Goodnight to the piggies, who've hardly a stench.