Someone declared the second Saturday of May to be National Miniature Golf Day. I don't know who, and I don't care. I don't even know if it's official in any way shape or form.

What I do know is I love miniature golf. It's like so-called real golf but without the falling heroes and the whispering announcers.

Here are some of my favorite courses:

This one has been around in one ownership or another since I was kid, so it's my absolute favorite. Carousel Park on West 7th Street (Route 66) in Joplin, Missouri, offers a chance to make a 'gator eat your golf ball.

I so miss the long-defunct H&L miniature golf on West 13th Street in Joplin. I have a metal loop-the-loop from H&L in my house and once in awhile I putt a ball through it just to reminisce. 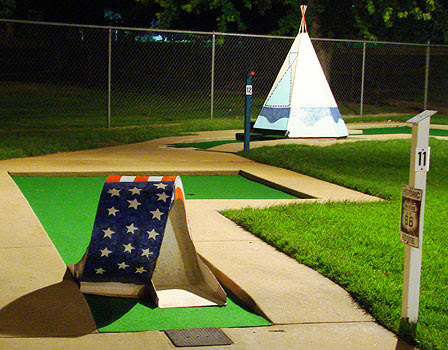 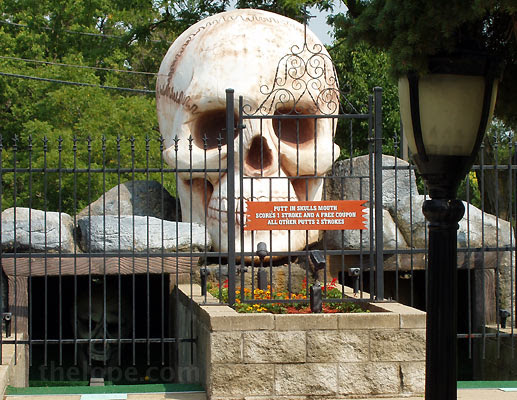 Also on Route 66, Haunted Trails in Joliet, Illinois will give you a free coupon if you can land the ball in a skulls mouth. 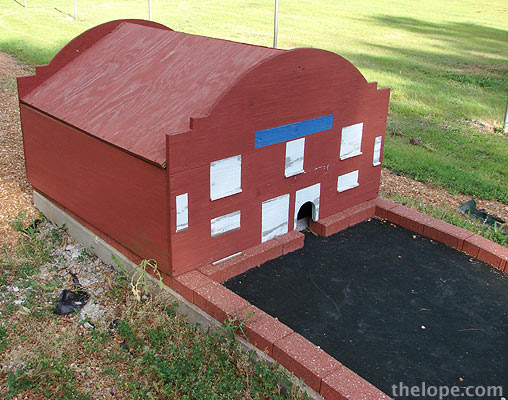 Benld, Illinois, on Route 66 offers (or offered) this course, which has a replica of a nearby building that once served as a coliseum/ballroom and later, a flea market. I ran across this in June of 2008 and do not know if it is still there. 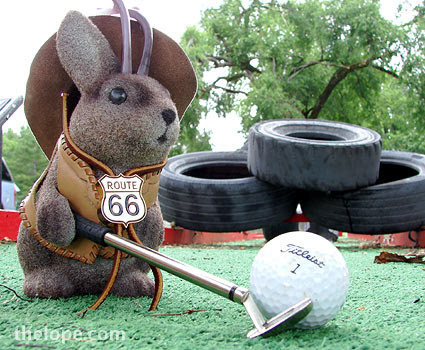 Not too far away, Scotty's in Hamel, Illinois, offers a small homespun course. 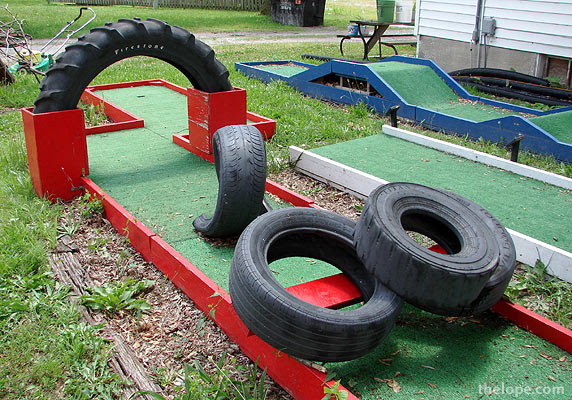 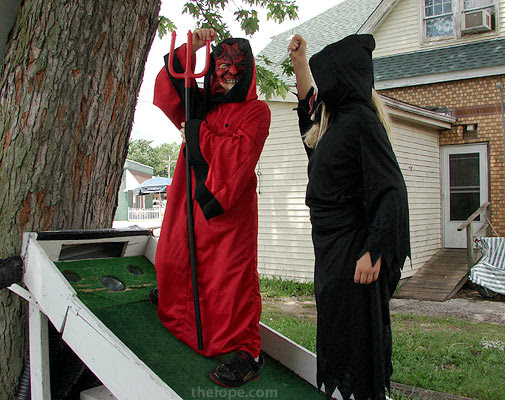 I don't know why these kids were there in Halloween costumes; it was June. They were kind of like living obstacles. 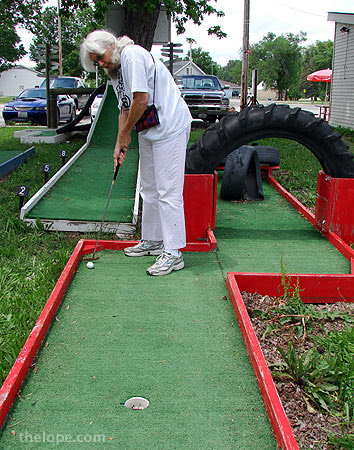 Joy Avery tries her luck on the links. 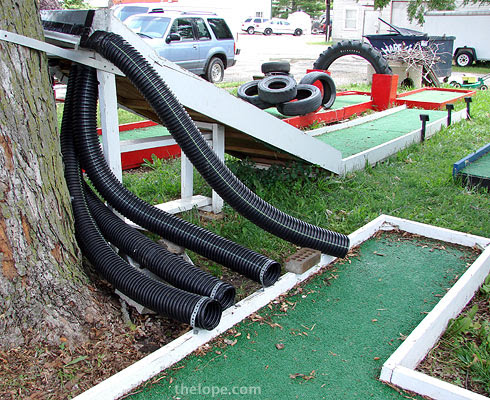 If Rube Goldberg designed a course... 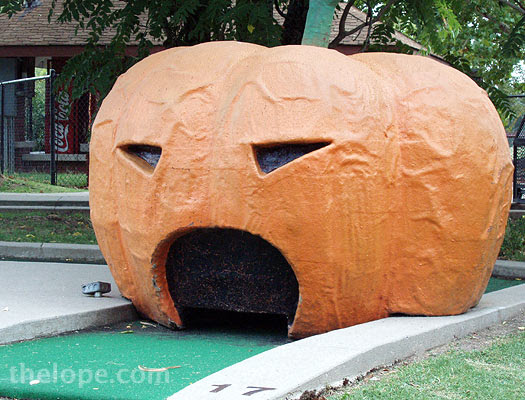 At Riverside Park in Independence, Kansas you can putt into a pumpkin.


Ace wore his suit of mail and wielded a sword and putter to ride the dragon at Cool Crest Family Fun Center in Kansas City, Missouri: Tiki Hut Mini Putt, located inside the Incredabowl bowling ally in Overland Park, Kansas, has a couple moai and some tikis on the course. 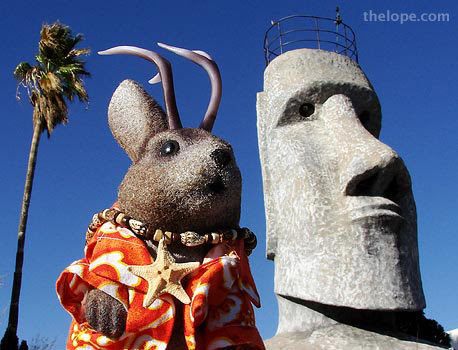 My favorite mini golf moai no longer serves it's original purpose as it has been moved from its home at the now-defunct Magic Carpet Golf in Tucson (above), to a bar called The Hut in that same city. Tribal Island miniature golf in Myrtle Beach, South Carolina, has fewer tikis than you'd want for a place with a sign like this... 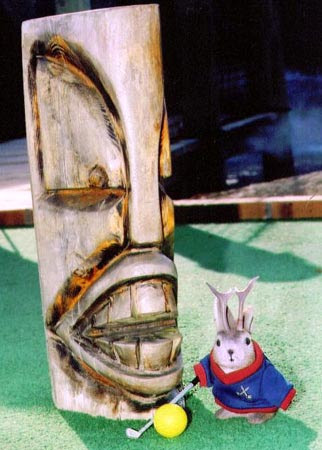 ...but it does have a few. And it has interestingly steep contours and a hill that shoots fog like an erupting volcano. 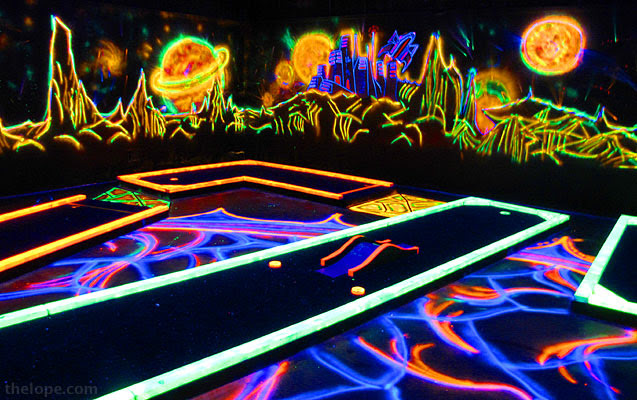 When I moved to Hutchinson, Kansas in 1984, I found the ruins of two defunct mini golf courses - one near the ailing Fun Valley water and the other beside Countryside Lanes on 30th street. Later on, a corporate Putt-Putt course opened but did not last long. Now, there's a fluorescent painted course of the portable type inside Jumpin' J's in South Hutchinson. There are also fluorescent courses in malls in Joplin, Missouri, and Wichita, Kansas. The one in Joplin has some of the old style metal obstacles. 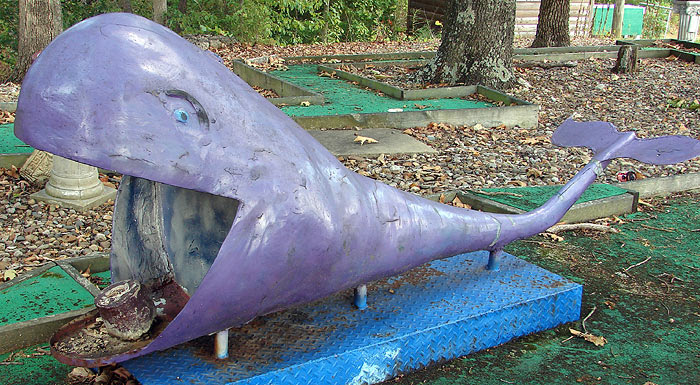 Oh, how I wish I'd have run across Golgotha Fun Park when it was as open as the mouth of Jonah's whale, but alas, it is finished. I wonder if any of the commandments covered what to do when your ball went out of bounds.

There are hundreds of fine mini golf courses around the country; so march right out of those over-size, water-guzzling country club courses go play some real golf - the kind with rockets and motorized windmills.

(Both videos above shot at Cool Crest, Kansas City)

posted by Ace Jackalope at 4:00 PM

There is a pretty cool course in Topeka, Kansas.

My name is ZIA. I enjoyed your blog site. I also travel the world. If you want to see where I have been go to

If you go to my site leave me a message.

Brilliant blog post about Miniature Golf. Some great photos of open and closed courses you've found. It's always a shame to find a course in a derelict condition like the one with the Whale.

The 'Route 66 Alligator' obstacle looks interesting too. I've found a number of Minigolf and Crazy Golf courses in the UK with Crocodile/Alligator obstacles.

I would like to thank you for the efforts you have made in writing this post. I am hoping the same best work from you in the future as well.