The Lope: Charles Phoenix to Appear in Kansas City

Charles Phoenix, "histo-tainer", will appear in Kansas City Saturday night at the Airline History Museum. The appearance is sponsored by KC Modern.

And what exactly does a histo-tainer do?

I've not seen his show, but as best I can tell, it's a humorously appreciative look at America's mid-century past through slides and, in the case of the KC show, an airline fashion show.

Yep, a slide show - slides that'll make you wish you had a TARDIS so you could go back in time with a digital camera. Don't be surprised if you see slides your parents threw out - you know, the ones with aunt Ethel in the glasses you'd pay top dollar for in a retro store, standing in front of that tourist trap you've only seen ruins of. 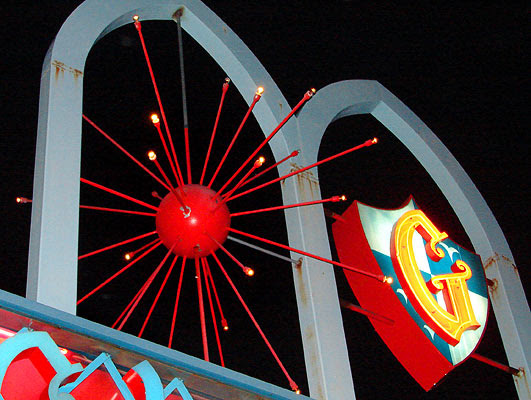 There may well be tiki involved, but there almost certainly will be googie. In fact, we know Phoenix is already in the KC area, checking out sights like the 1966 sputnik we explained in sputversary. 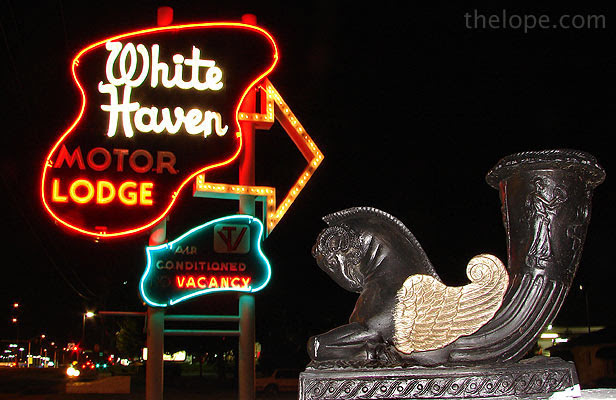 We've also been informed he has developed a fondness for our favorite KC area motel, the White Haven in Overland Park.

The White Haven, alas, is doomed. It was recently sold by the family that ran it for 51 years. It will be operated for about another year under new management, I am told, and then be bulldozed. Here's the White Haven sign in happier times last year, with one of their driveway ornaments in the foreground.

For more on Charles Phoenix's unique show, see this story in the Kansas City Star.

posted by Ace Jackalope at 1:27 PM