The Lope: New Stuff at the 2008 Kansas State Fair 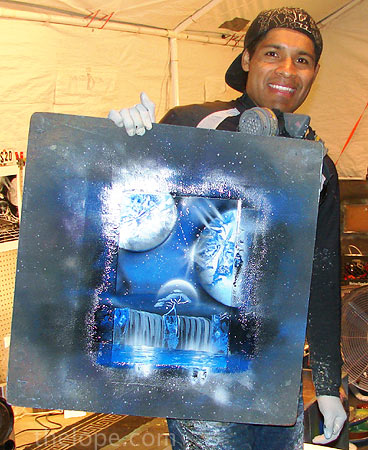 Crowds ring the booth of Enrique Morales to the degree that the first few times I walked by, I couldn't see what was going on. Morales, who says he is originally from Mexico City but now resides in Dallas, speed-paints with spray paint in what can only be described as a frenetic performance.

Morales can be found on the west side of the lane that runs alongside the KWCH studio. Just look for a bunch of people.

Moving on, At first I thought the Procrastinators (below) might be a group of industrious young men who formed a band and had successfully marketed themselves to the fair.


Nope. They are fielded by LA-based PCI Productions, which furnishes such bands to fairs, corporate meetings and seminars.

Still, they're fun to watch. Funny, too. Those are five-gallon water jugs they're playing. 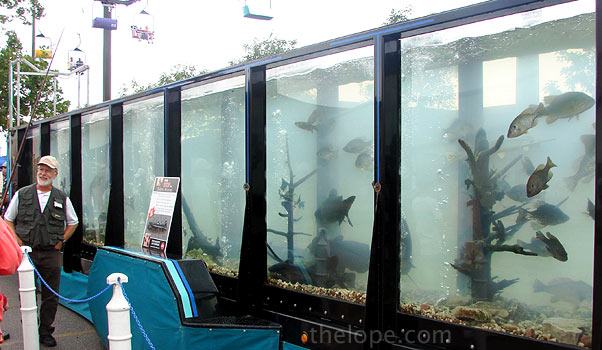 New to the fair this year is this 3,200 gallon aquarium of Kansas fish displayed by the Kansas Department of Wildlife and Parks, south of the grandstand, near the gate. 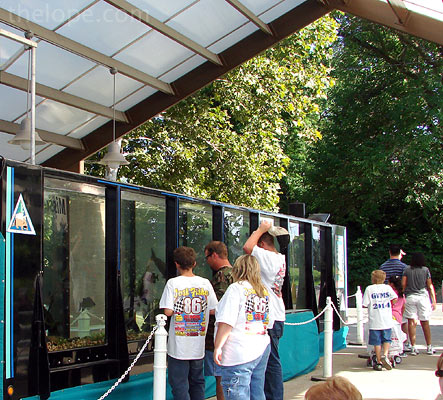 I'd noticed the same sort of tank at the Missouri State Fair in Sedalia a few weeks ago (above). When I mentioned this, I was told it was the same unit - that Kansas had purchased it from Missouri.

The aquarium is lit at night. 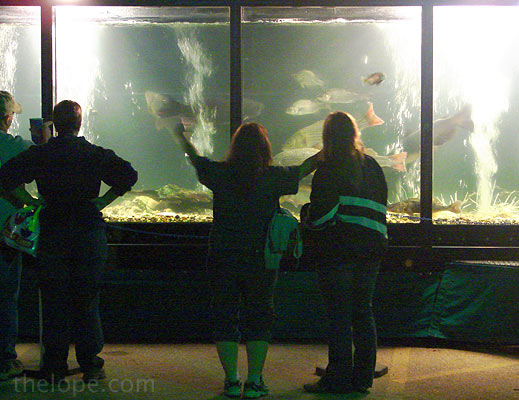 I had fun backing up and listening to people's fish stories. 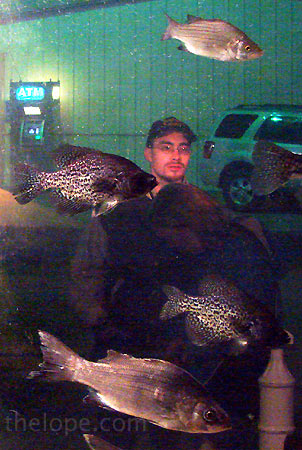 Ice is dumped into the aquarium everyday to lower the water temperature. 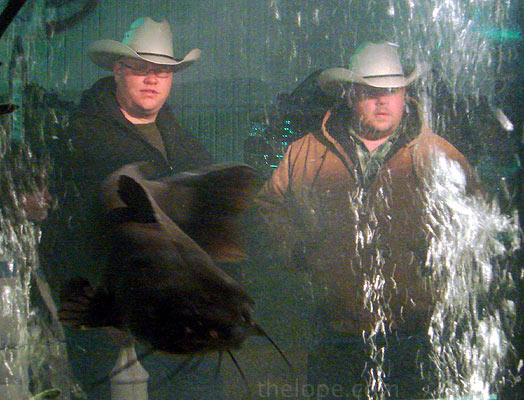 The fish are not fed. An operator told me they don't need food at the lowered temperature and that the waste products they'd produce would be problematic. 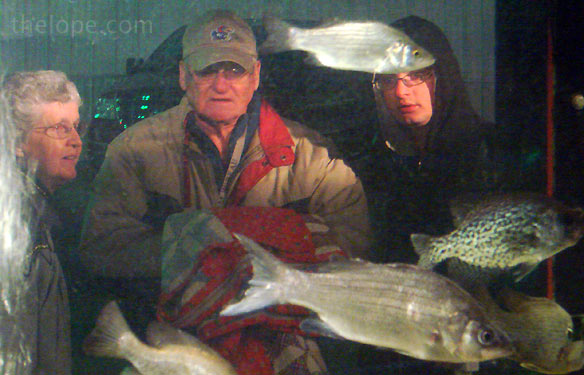 Still, a few of the smaller fish had been eaten by larger ones.

The Kansas Department of Wildlife and Parks still has its indoor display in the Eisenhower Building. I know they're not considered good game fish, but I like gar; they're so primitive looking.

A Prairie Kingsnake looks for a way out.

Back to new stuff, a representative for Dazzling Smiles Inc demonstrates their ultraviolet teeth-whitening technology.

The state of Texas is smartly marketing itself just north of the carnival. They've got a virtual reality presentation of the state's attractions, followed by a green screen photo room in which you can choose from several Texas backgrounds. The photo is emailed to you free within a couple days. Yeah; it's marketing and a way to get valid email addresses, but it's free and it's kinda fun.

They did have a cowboy talking to people in a separate inflatable room, but the operators told me they stopped because he could not be heard over adjacent helicopter rides run by another vendor.

I'm sure there are other new things this year at the fair; these are just a few that jumped out at me. I hope to have more fair stuff up Thursday night.

posted by Ace Jackalope at 6:44 AM

Hey Ace- just wanted to give u heads up on this Enrique painter. I am in no way hating on any artist- I am a fan of many spraypaint artist- but this guy is a total fake! Check out you-tube under "spraypaint art martin martinez" he goes by "Cosmo". The music is "Cosmo's" own mix and has been for many years
C 4 URself! Wendy` (innprtt@aim.com)