Yesterday, Ace Jackalope met Wilma the Hutchinson (Kansas) Zoo's groundhog. Wilma, who goes by the name "Hutchinson Hanna" when helping in educational presentations, is a senior citizen by groundhog standards. She'll be seven years old this Spring, and groundhogs usually live 4-6 years. Normally a groundhog has hair on its tail, but as Ace is noticing, Wilma has lost hers with age. 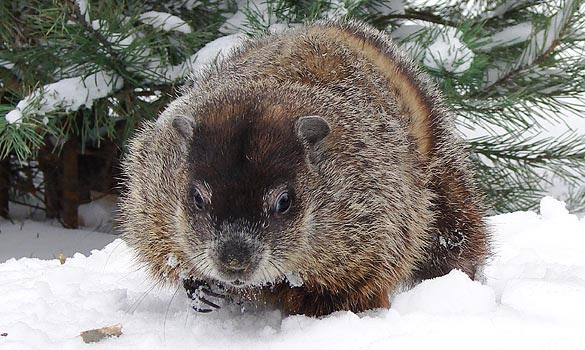 Why were we seeking a groundhog? Why, to get the advance scoop on the weather a bit before Groundhog Day, which is tomorrow, February 2nd. We can already tell you that Wilma will not see her shadow tomorrow, and thus, will not predict six more weeks of bad weather. We know this not because we are great prognosticators, but because Wilma stays indoors in the winter; a kindly zoo person brought her out to meet us. 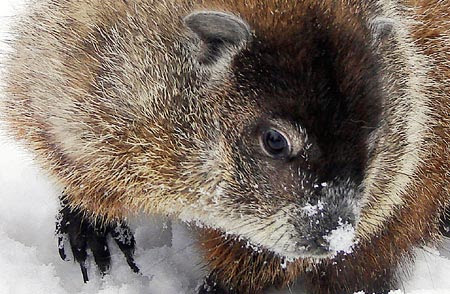 Normally, groundhogs hibernate, digging substantial burrows with the claws you see here, but, as Wilma is kept inside, she has no need to do so. Oh well, so much for old world prediction methods in Hutchinson, Kansas.

And that's too bad, really, because Groundhog Day is pretty interesting. It's a natural time - an instinctive time, I'd even say - for a holiday. It falls about halfway between Winter solstice and Spring equinox, and if you ever needed something to brighten your day, it's now. People who have winter to contend with seem always to have known this; indeed, a celebration during this time has roots going all the way back to pagan times. (Next two photos and paragraphs added Feb 4): As a matter of fact, after I first posted this, I was invited to photograph a local group's rendition of a February 2 pagan celebration called "Imbolc", "Oimelc" or "Brigit's Day" for the Irish goddess, Brigit. Of course, the origins of such things are usually shrouded, and Brigit (variant spellings exist) is no exception. Some scholors believe she was associated with the return of the sun but there is more agreement that she was associated with fire, hence the candles. 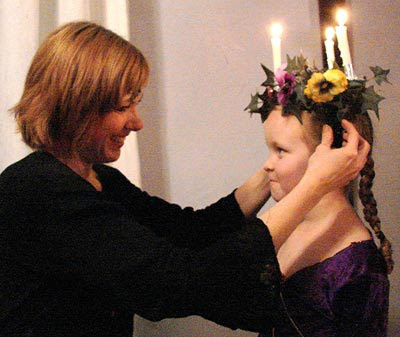 The headdress used in this particular celebration is similar to those used in the Swedish celebration of Saint Lucia in December, which also has pagan origins.

After the Roman Catholic Church's conversion of Ireland, worship of Brigit was discouraged and a "Saint Brigit" (or Brigid) was canonized by the church. Of course, accounts vary as to whether the saint was a historical personage or simply an alteration of Irish Celtic pagan custom to ease assimilation into the church. In any event, February 1 became her feast day and has become closely associated with another Catholic holiday which occurred Feburary 2. The early Catholic church celebrated two events in the life of Jesus on that day, both of which were from Jewish custom: "The Presentation of Jesus at the Temple" and "The Ritual Purification of Mary", 40 days after she gave birth. "Candlemas" eventually became the more common (and less unwieldy) name for the holiday, and it was also used as a day to bless candles, which were much more important then. And still, the date's strategic importance as the middle of winter was not forgotten; an old English saying goes:

If Candlemas be fair and bright,
Come, Winter, have another flight;
If Candlemas brings clouds and rain,
Go Winter, and come not again.

The European hedgehog became associated with this tradition somewhere along the way. (Every time I see "hedgehog", I think of "Spiny Norman" a giant hedgehog from a Monty Python skit.) 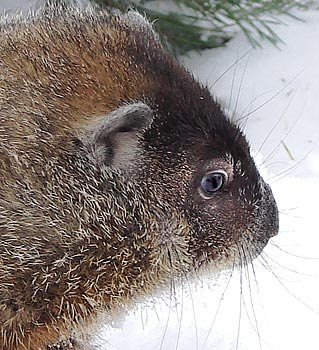 Where did American groundhogs enter the picture? Well, early German settlers of the Pennsylvania area noticed the groundhog's resemblance to hedgehogs and so the candle of Candlemas was passed to another sleeping furry critter.

There has been quite a bit of fun had with the tradition; the most famous groundhog, Punxsutawney Phil of Gobbler's Knob in Punxsutawney, Pennsylvania, has made a number on interesting statements outside his usual purview, including a prohibition-era threat to impose 60 more weeks of winter if he wasn't given a drink. Those around Phil have built quite the tourist empire and their website has some fun "facts" including: "There has only been one Punxsutawney Phil. He has been making predictions for over 120 years!" 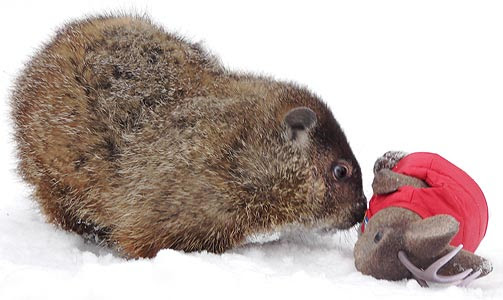 By the way, there is also only one Ace Jackalope - just one - despite a zillion fur-abrading clothing changes, rainstorms, ice-encasements, dunks into two oceans, falls from several neon signs, one cruise ship and one fake castle, attacks by Llamas, geese and other animals, cavity searches by overzealous security people...and you just don't wanna know what else. Yeah, just one.

If your credulity alarms haven't shut you down yet, you might want to check this link tomorrow to see what Punxsutawney Phil says about the rest of winter. As I write this, I'm noticing their website is overloaded every few minutes, so you might have to try a few times. Back in Kansas, our ability to compete with Punxsutawney is severely limited because groundhogs, also called a woodchucks, exist in Kansas only in the eastern third of the state so they're not available to do their meteorologist routine in most counties. Also, where they do exist they have the common sense to be asleep on February 2, so I suggest we appoint an alternate - the humble and readily available distant relative of the groundhog, the Black-tailed Prairie Dog of central and western Kansas.

The substitution of prairie dogs for groundhogs is not an untested idea. According to a recent article in the Rocky Mountain News, the cities of Boulder and Lakewood in Colorado, and Santa Fe and Albuquerque, New Mexico have already declared Feb 2 to be Prairie Dog Day.

Prairie dogs could use the good publicity in cities like Hutchinson, Kansas, where they've been the center of controversies between the city, developers and prairie dog sympathizers. We could just listen to well-trained meteorologists, but as a guy who recently drove in a "trace" of snow that turned out to be several inches, I'm willing to give the rodents a chance.

Update (Feb 4): Punxsutawney Phil did not see his shadow. If we are to believe the little guy, we'll not have too much more winter. I'm stocking up on "ice melt" anyway.

As usual, your photos are stunning . . . making me very envious of the talent.

Phyllis Renée, you flatter me. Much of the time I'm just lucky. You should see the volume of stuff that *doesn't* quite work. Right now I'm trying to pull some candle-lit pics of people out of intentional underexposure (had to get the shutter speed up, so sacrificed exposure) and trying to de-emphasize the noise from shooting at 800 ISO by using selective blur in Photoshop to subdue the graininess in dark areas. It'll work, but it'll be time-consuming. Btw, love your new profile pic...pensive...not bad for a photo of a woman without something with antlers in it.

Do you know that the 2nd most famous ground hog is "SMITH LAKE JAKE" of Smith lake Alabama, he is just adorable, and he wears a hat on his cute little furry head. Check him out go under Smith lake jake and find smith lake living and go into that and scroll down until you find his cute little picture. He was on the 2006 America Idol reality show predicting that Taylor Hicks would win, He also does shows at the Birmingham zoo and on fox 6 news on groundhogs day.

Smith lake jake is the 2nd most famous groundhog. If you want to see him all you have to do is google in----- pictures of "smith lake jake". He wears a hat, with his name on it. really cool!!!