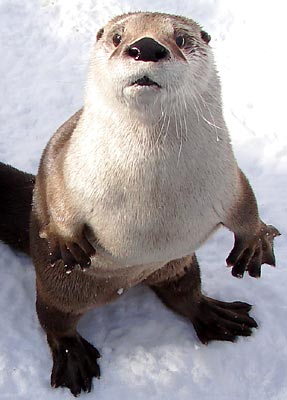 What can be more inviting than a new-fallen snow? Not much, that's what - but cool critters compel too. After this past weekend's snow has stopped falling, I headed out Sunday morning to see what the city looked like under 7" of snow. After a visit to a cemetery and before going to a movie I went down to Hutchinson KS's Carey Park in search of anything cool and snowy.

Eventually I ended up at the small but impressive Hutchinson Zoo. One of the things I admire about the zoo is its wild animal rehabilitation program. According to their website, in 2004 a record high of 655 sick or injured wild animals were cared for. Most were released, but if injuries make them unable to sustain in the wild, they may be housed here. 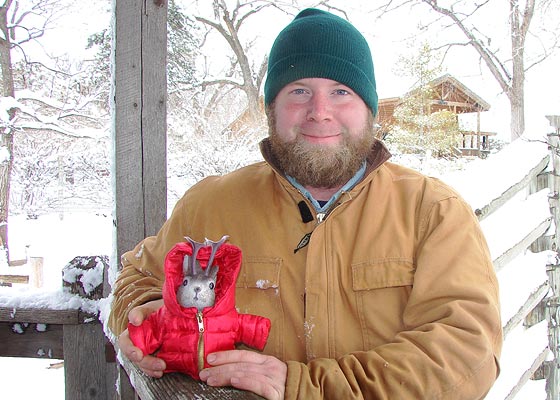 Ace Jackalope and I ran into Matt - one of the zoo's several keepers - who showed us around a bit.

I initially came here looking for snow-involved patterns like this, but was quickly pre-occupied by animals. I should have forseen that. 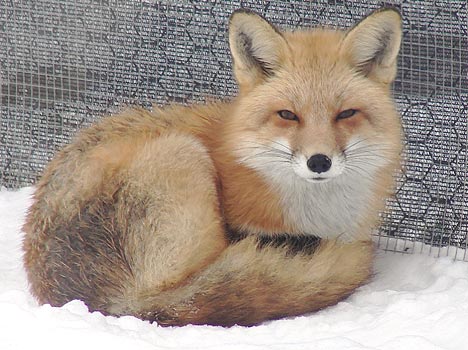 This Red Fox jumps over nothing. Foxes have learned to exploit urban areas due to competition for territory with coyotes, which are less urban-inclined. 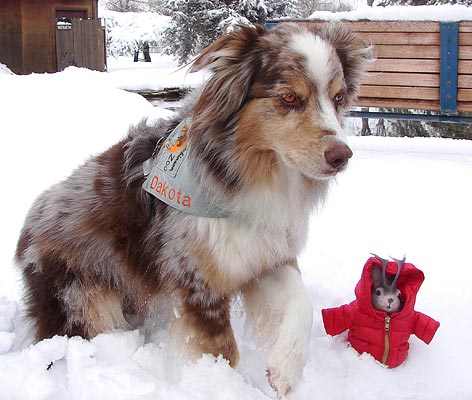 Matt introduced us to Dakota, an Australian Shepard who's job is to keep geese off the pathways. 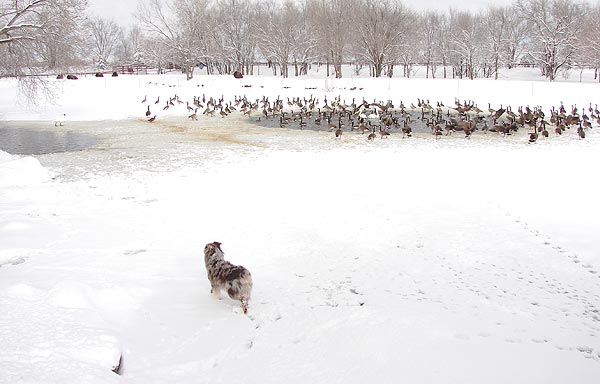 He seems to do pretty well at it. I was looking across the zoo's lagoon when a bunch of geese flew around me, followed by Dakota dashing around my legs and pursuing the geese to the edge of the water. Across the lagoon is the buffalo habitat. See that little dark spec across the pond, about 1/3 from the left edge of the picture? 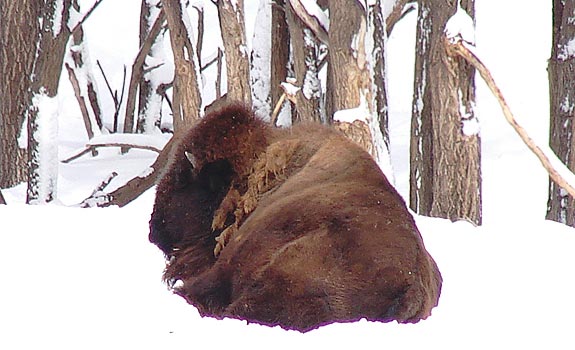 Here's a closer view; it's an American Bison (Bison bison) resting in the snow - part of the zoo's small herd. At up to 6' in height and as much as 2000 lb., bison are the largest mammals in North America. 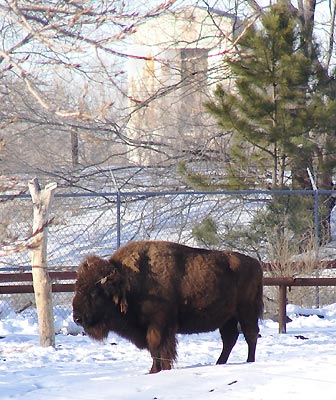 A couple days later I returned and shot this Hutchinson scene: A bison with a salt evaporation plant in the distance. The snow had already drifted off the trees. I have never seen a large herd of bison away from fences and such. A little research on this shows that I should go to the Maxwell Wildlife Refuge north of here in McPherson county sometime soon. 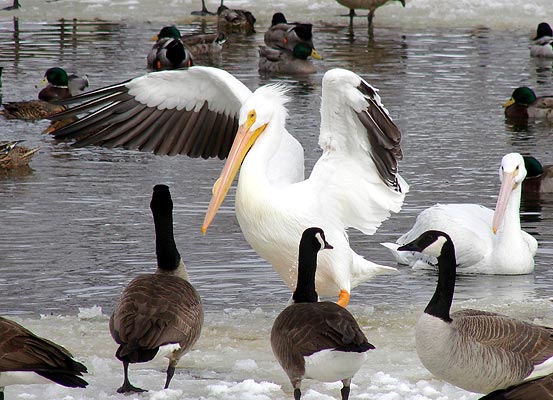 A pelican flexes its wings among Canada geese in the pond.

Ace entered the Pronghorn enclosure. Jackalopes are said to be the descendents of jackrabbits and antelope, you know; as far as I can tell, a Pronghorn (Antilocapra americana) is not considered an antelope, but they're similar. The female was the first to investigate him; he stayed perfectly still so as not to startle her. 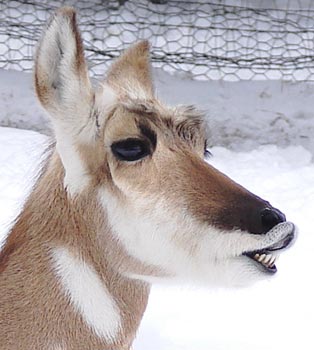 Less than half of female pronghorn have horns, and they aren't very long. Pronghorn usually give birth to twins and a four day old Pronghorn can outrun an adult human. In fact, Pronghorn are the fastest land mammals in the world; they can sprint as fast as 60 mph and can sustain a speed of 30 mph for several miles. I'd always heard that the African Cheetah was the fastest, but apparently the Pronghorn can sustain such a speed much longer. 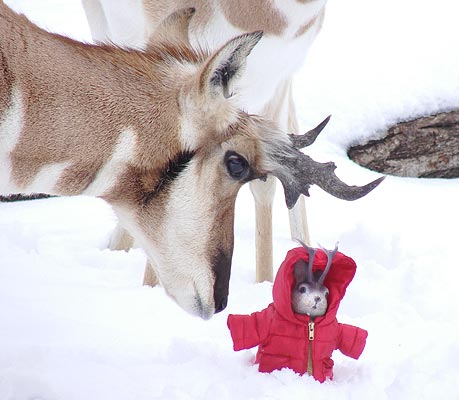 The male Pronghorn takes a sniff. See the black patch on the jaw below the eye? Only males have those. I've sometimes heard these animals called "pronghorn deer" but they're not true deer at all. In fact, Pronghorn are the only living members of their family left. One of the zookeepers told me that Pronghorn "antlers" are problematic in classification so I read up on this. (If my anal-retentive ramblings get a little dull for you, just scroll down to the pictures of the cute otters.) 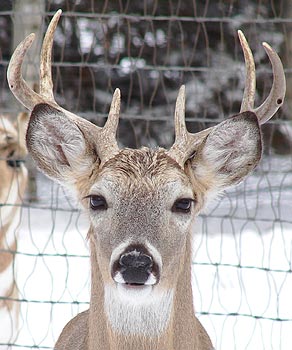 For contrast, here's a pair of true antlers on the zoo's white-tailed deer (Odocoileus virginianus). Antlers are shed every year, and are made of bone. Horns are made of keratin (a kind of compressed hair) around a bone core and are never shed. 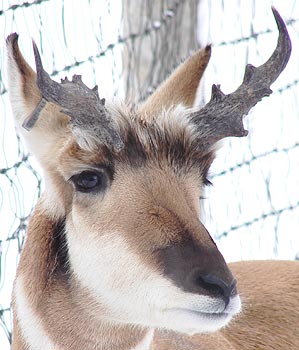 The horn sheath of a Pronghorn is made of keratin growing on a bony core, like true horns, but they are shed every year like antlers, so they do not quite fit into either catagory. The website of the Great Plains nature Center was my best resource in researching this, and offered a lot of other data about these animals. Their population dwindled - largely due to hunting in the late 19th century - from at least 40 million in the Great Plains to about 12,000 by 1915. They're back up to about a million now, and most live in Wyoming and Montana. Fewer than 2,000 Pronghorn live in Kansas - I saw a herd about 20 years ago in Gove county on the west end of the state - and attempts to reintroduce them to the Flint Hills of Kansas have not been successful. 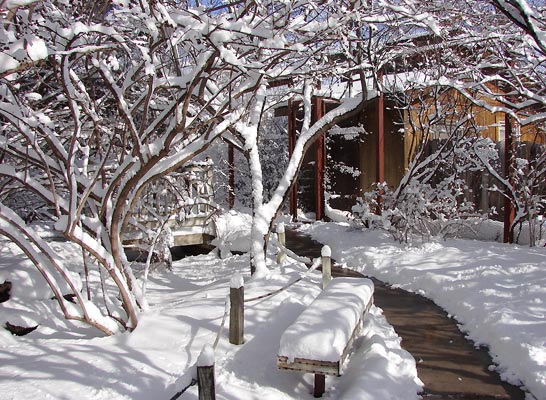 The zoo's enclosed aviary was its own little winter world on Sunday, after the snow had stopped. I saw no birds in here this day, but that isn't why I came. 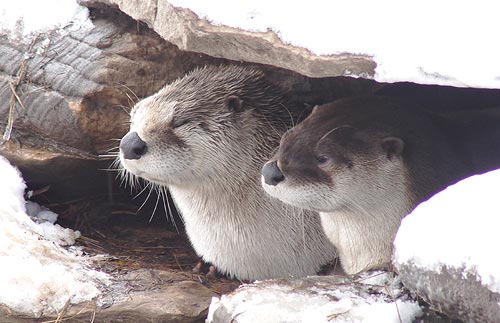 This is why. Willy (left) and Kyra are North American River Otters (Lutra canadensis) who live in an artificial stream in the aviary. Willy came from Louisiana and Kyra is from the Sedgwick County Zoo. According to signage at the zoo, otters were once common in Kansas but are now quite rare; they are usually only present in Kansas when re-introduced. The culprits are what you'd expect, excessive hunting and destruction of habitat, which is pretty much their story all over the country. 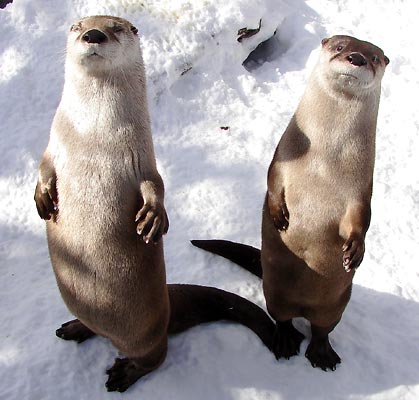 As soon as they spotted me, they piled out of their cave and stood eagerly just on the other side of their Plexiglas fence; I suppose they wanted food. 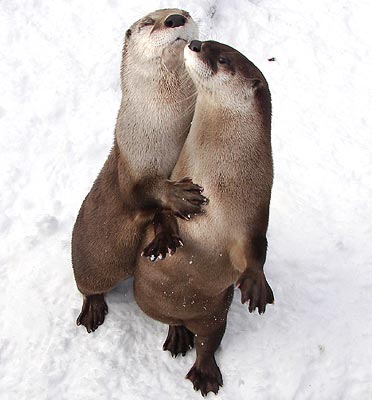 I don't know if Willy and Kyra are a mating pair, but according to the University of Michigan's Animal Diversity Web, it sounds like male otters have a fairly good time: "males often breed with several females, probably those whose home ranges overlap with their own." 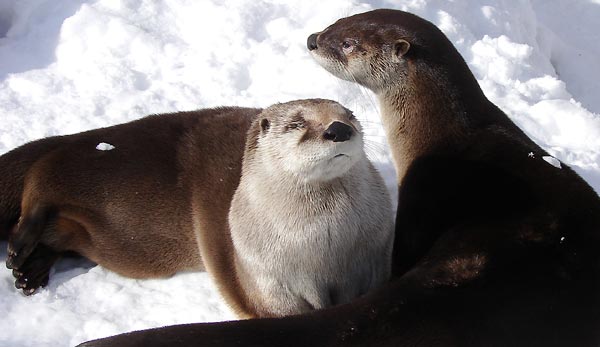 The females have an interesting option pertaining to when to give birth; they can actually delay implantation of the fertilized egg in the uterus and give birth as much as a year after mating, even though gestation only takes two months. 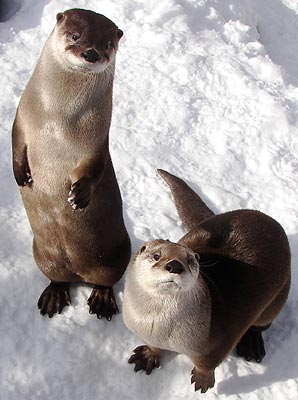 North American river otters normally live about eight or nine years in the wild but may last up to 21 years in captivity. 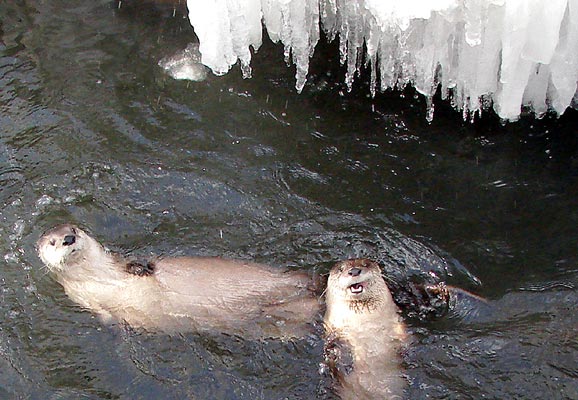 Otters can swim at average speed of seven miles per hour and, according to National Geographic, they can stay underwater for up to 4 minutes. Their entrance into the water would make an Olympic diver envious; they make barely a ripple. They're no sluggards on land, either; according to National Geographic, "They run a few steps and then slide on their bellies. One slide can be as long as 20 feet and may reach a speed of 18 miles an hour." 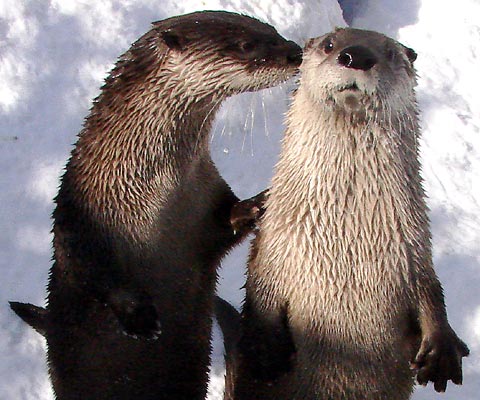 They're especially watertight, having valves that close about their ears and noses. Their long "guard hairs" form a tight seal around the skin, which may actually be dry under all that wet hair. 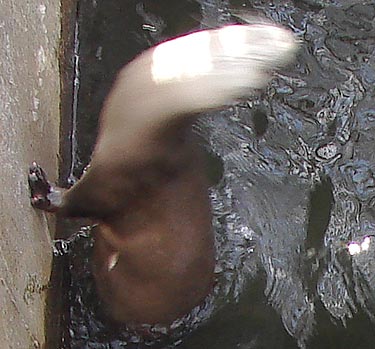 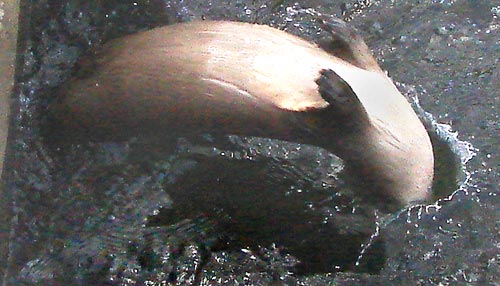 The otters, usually Willie, tend to do these back flips up against a wall. I asked two different zookeepers if this was "play" or if I was anthropomorphizing their behavior to call it that. They didn't really know, but several websites I searched said they do play, although the behavior also serves the purpose of honing skills used in hunting and escaping.

Here's a YouTube movie of it. Of course it's pretty low-res, but it's cute and I thought you might enjoy this little dose of ottery goodness. It's twelve seconds long and shows three back flips.

Here's a 17 second one - no flips, but they swim around a lot and look kind of like they're rehearsing a aquatic dance.

This is a long one at 56 seconds - a real stopper on dial-up - but you can hear them communicating as their species does, with a series of chirps. 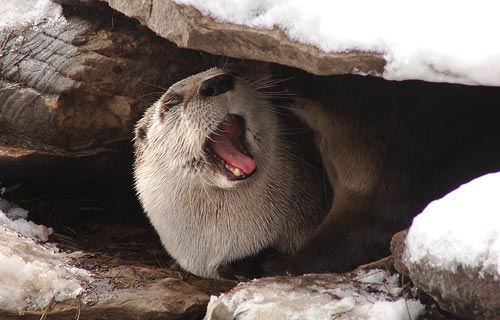 That's all for now, catch ya later.

Interesting and educational post. How wise of Ace to hold still when being investigated by the pronghorns. :-}