The Lope: Everybody Loves the Monkey

Everybody Loves the Monkey

"Everybody loves the monkey" quipped the woman who passed me on the sidewalk as I knelt down for another angle from which to see the blue neon simian one crisp October day last year. I gather I wasn't the first person she'd seen photographing this neon masterpiece. 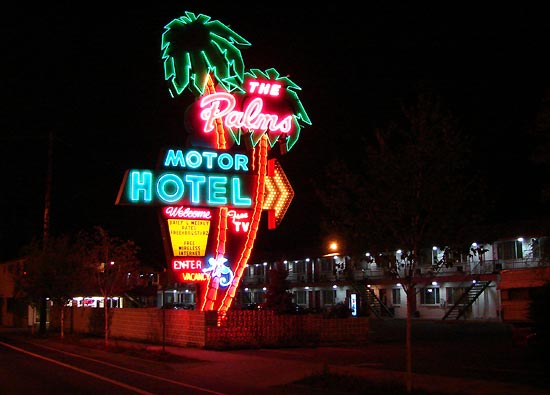 The monkey has been climbing the palm tree for 53 years at, appropriately, the Palms Motel in Portland, Oregon. The motel and the sign were built in 1954. 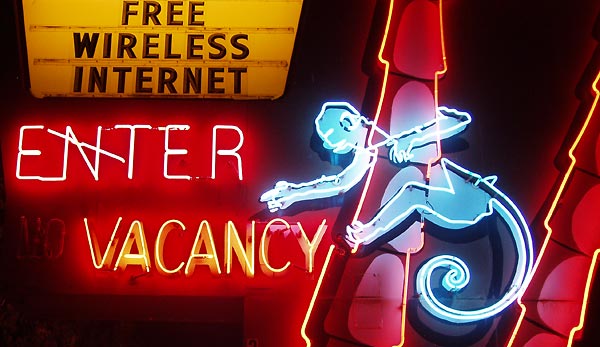 Three little words: free wireless internet. That's what I want to see. Aside from its usefulness, I do love the contrast in eras represented here. 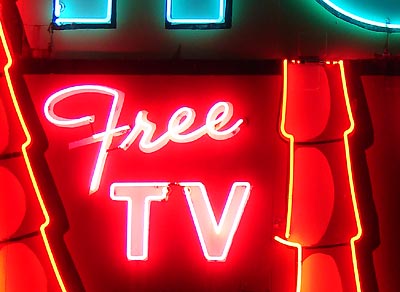 It used to be that "Free TV" would get us excited. Now we need free Wi-Fi. Of course, while "Free TV" and "Pool" were often made permanent neon-scripted parts of a sign, "wireless internet" probably never will be - a sign of these fickle times, destined to be spelled in removable letters and replaced by the next free gotta-have perk. It's a shame, really. There'll be no 50-year-old signs to remind us that we got really excited by being able to scope out a city by checking out the websites of our own subcultural interests from the comfort of our motel rooms.

I suppose that decline began with "Free HBO", which, though sometimes painted on, is seldom a permanent compositional part of a sign. 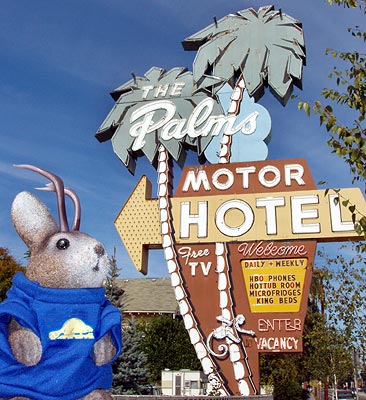 A subtle thing I like about the Palms sign is that the message display part of it looks quite natural. 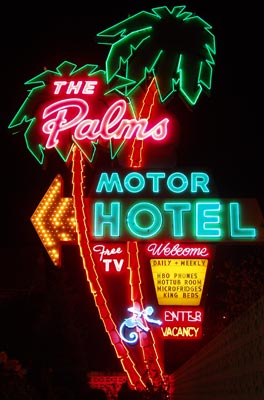 It's not a clunky, too brightly lit add-on as is seen on many motel and restaurant signs and does not burn out in time exposures as so often happens.

I love the term "motor hotel"; it evokes so clearly the car-crazy era in which such places were built. 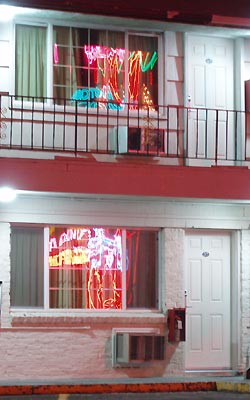 You know you're looking at a really big neon sign when its reflection is two stories tall. 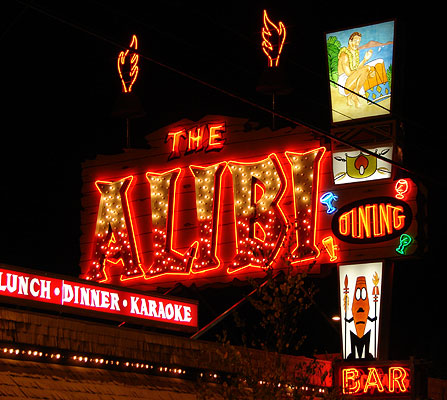 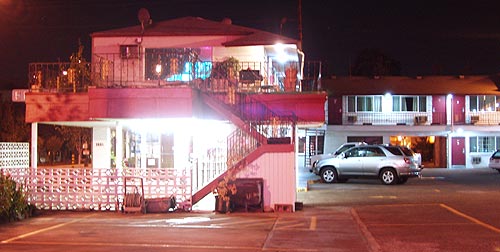 What's the Palms Motel like inside? I have no personal knowledge of this, but mid-century maven Humuhumu shed some light on the Palms' interior in a post to Tikicentral:
"I love the Palms! It's definitely not for everybody, though." 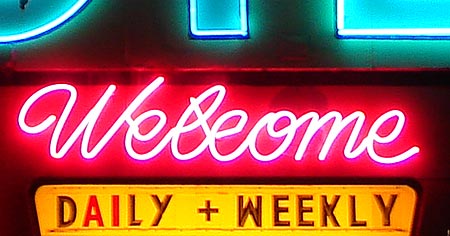 "It's not the nicest digs, to be sure" she said, "When I last stayed there, I was given a room with a deadbolt that didn't line up with the door frame, and curtains that when closed left a 3" gap looking right into the room (the Palms is a courtyard-style motel). The room wasn't the freshest, in either aroma or appearance, but... that sign! That short jaunt to the Alibi! It did the trick for me."

"It's a little gross, a little scary, a little weird" she continued, "but dang if it hasn't given me some great laughs and memories." 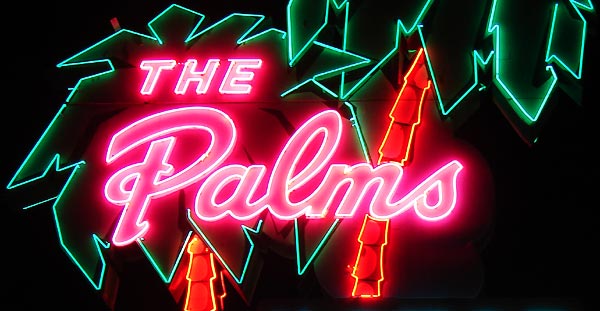 "I have my days where I want something predictable and comfortable, but usually I like a little more spice in my stew. It's for adventurers only," she concluded.

The bathtubs - both regular and the hot tub - have been mentioned as being rather small. "Sputnikmoss", another mid-century enthusiast from tikicental, wrote of a Valentines Day date with her husband that involved the Palms' hot tub: "It was hilarious, especially being that we shelled out an extra 15 bucks for it. I don't think even I could have fit in the tub by myself...and since a dead horsefly was already enjoying it, who was I to kick him out!" Overall, she commented: "It is a dive but in a good way."


All that being said, I'd stay there if I had the chance.


A huge picture I recently posted of a Christmas tree went over well. I don't want to clog the front page with another huge picture right now, but if you want a 700 pixal-wide shot of the Palms' sign, click here. I'll probably add it, and more pics, when this is off the front page. 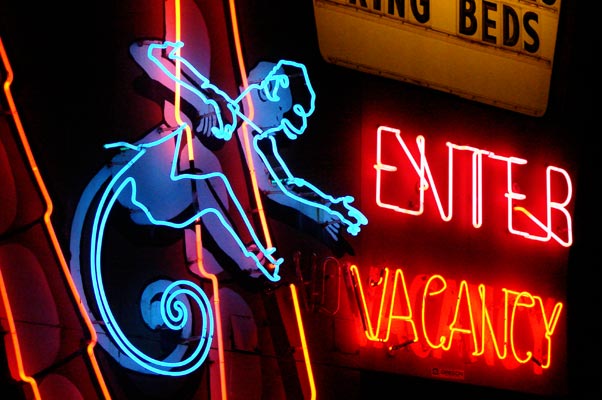 You too can love the monkey at the Palms Motel, 3801 N Interstate Avenue, Portland, OR. Just drive down Interstate Ave; you'll know it when you see it.

Where is Ace Jackalope? (episode 7) - I saw a pink elephant at a car wash.

Where is Ace Jackalope? (episode 6) - Always talk to a giant bunny.

Where Angels Breathe - On the way to Seattle, we look down from on high.

Gorgeous photos. I adore neon. This particular one is new to me!

Love, love, love the Palms sign. Your pictures of the neon signs are great. What are your camera settings? One of these days I might venture out to get some nice night photos of my own.

Phyllis, for neon, I try to go with the lowest ISO I can manage, which still usually allows for a decently holdable shutter speed. Neon is a versitile subject and a sign can usually be photographed just for the tubes, which gives you what looks like a line drawing in very saturated colors. Or, my favorite approach is to expose for the metal just behind and beside the tubes which renders the tubes not as saturated but more then makes up for it in having the colored glow reflecting off the metal. When I shot film, I would carefully spot meter. In digital, I just bracket since it costs nothing. Tulsa has lots of good stuff to practice on; next time you're there, arise, go forth and capture.