The Lope: Eating Our Way Across the Fair

Eating Our Way Across the Fair 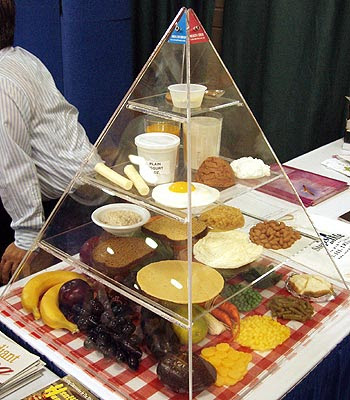 This is a food pyramid exhibit at the 2006 Kansas State Fair; ignore it for a few days if you want to enjoy yourself at the fair. This post is about fair food, and fair food is about excess and wanton consumption. 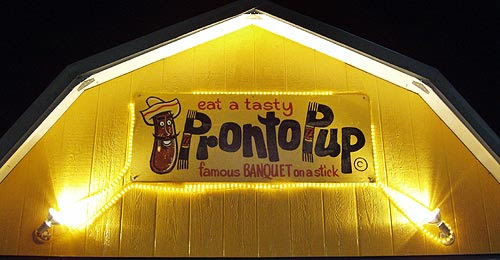 In that vain, I bring you an appetizer, available near pretty much any entrance you'd choose. Yes, the venerable Pronto Pup, that less-course, sweeter cousin of the corn dog that must have some sort of addictive substance inside (legal disclaimer: just kidding about the addiction thing). There's a lot of stuff online about Pronto Pups; google it if you want to know more. 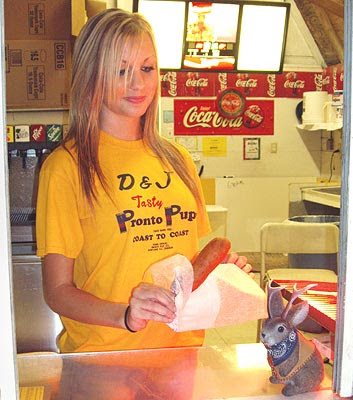 The Pronto Pup is a ceremonial thing to me...it's like the culinary kick-off to the fair. There are five Pronto Pup stands this year at the fair, and the cost is $2.50 for one of those puppies. Pronto Pup stands at least look interesting, my next choice does not. My lunch or dinner favorite is the Central Christian School Help Yourself Buffet; the place is about non-descript as you can get. They used to be the Central Christian Cafeteria when they had a wooden stand-alone building; the fair board ordered it torn down and the space is now occupied by that cool multi-colored fountain/mini water park.

Central Christian and several other vendors moved into the Cottonwood Court, a non-descript food court that used to be called the Commercial Building before the remodel. Although I must acknowledge the utility of the food court (i.e. air conditioning), I miss the character of the old stand-alone restaurant. This is my plate after a trip through their $7.00 one-trip buffet. I like the chicken and noodles and the stew, in particular. A soft drink will set you back another $2, which is about average. For my money, the best drink value at the fair is the $1.50 large root beer at any of the four root beer stands. They have diet, too. Part of what makes them a good value is that they have no ice so that's a cup full of pop undiluted by frozen water; you don't really need the ice, the root beer is plenty cold out of the tap. These root beer stands have been around at least 20 years. I can remember when the small size cups were fifty cents. They've had a problem with bees being attracted to the stands, drawn by the sugar, I suppose, but I've seen little of that this year. You'll need something to eat with that root beer, and I suggest peanuts from Allen's P Nuts. A bag is $1.00 and they have salted, unsalted and hot. Those barrels are warm and fun to stand over when it's chilly. The previous owner was a fair institution for decades and the current owner has kept the age-old signs with the peanut guy on them in order and seems respectful of the heritage of which he is part. Now that you overdid the salt with those peanuts you'll need another drink. May I suggest the lemonade my friend Mark prefers? I like it too, but I am swayed by the novelty lemonade stand. I'm just shallow that way. 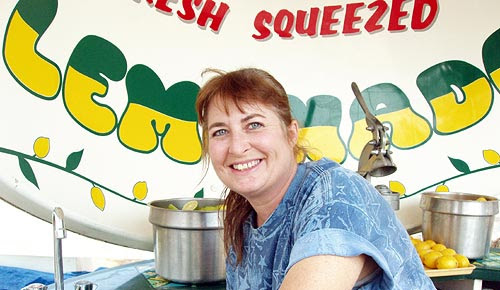 There's just enough room in one of the lemons for the operator to work with his/her equipment 360 degrees around them. The lemons are fresh squeezed; you can see the juicer back there. Ace liked his lemonade shaken, not stirred, and his new friend Micki does just that, then pours it back and forth between cups for a bit and serves it up. It was $3.00. There's only one lemon-shaped lemonade stand, and it closes at night, literally. It reminds me of the orange-shaped citrus stands that used to dot Route 66 in California. I believe only one of those remains, in Fontana, CA, preserved in a Wal-Mart parking lot, of all places. I guess that means the lemon at the fair, even though it is only eight years old, is in a better setting. It's portable, of course, and the Wichita owner totes it other places, too. Another place that friends have turned me on to is the Kansas Dairy Association's Dairy Barn, under the grandstands. Though I'm not researching the history of places too much in this particular post, I did chat with some other customers and apparently it's been open at the fair for at least 30 years. They serve great ice cream, milk shakes, malts, etc., and are a "must stop" for several of my friends. A malt or milk shake is $3.00. 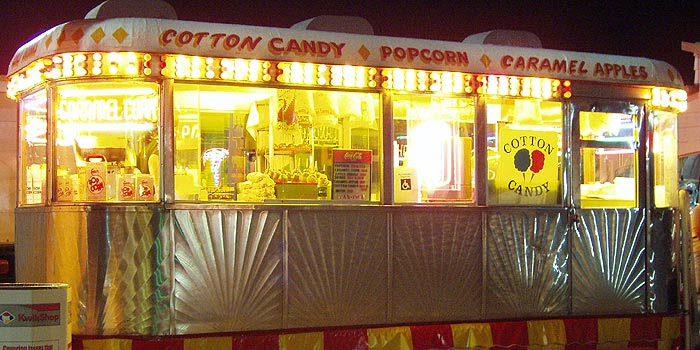 Zag's popcorn was my new food discovery this year. New to me, that is, but the owners tell me it was built around 1952. I was initially drawn by its gleaming stainless steel sides. In previous years, I've seen it near more multi-colored light sources, which made it look even better. I'd never eaten there, though. Zag's is owned by Frank and Glenda Hockridge of Fessendon, ND. That's their daughter, Christina. Glenda refers to the trailer in the feminine, like a ship. They've hauled it to quite a few Midwestern fairs and a she says people have to "come up and touch it like a 55 t-bird." It really is a trailer and she says they pull "baby doll" no faster than 55mph. Christina serves Ace a caramel apple. A friend and I had these and the apples were exceptional in quality; they are $2.50. My favorite food this year has been the roasted sweet corn. It's actually guilt-free, more-or-less. Here, a nice lady named Irene hands me my $3.00 treat. The corn has already been dipped in butter and I have a number of seasonings to choose from. This particular stand is across from the KWCH studio. Every year there seems to be a "shock food" - the thing that people dare each other to try. For the last couple years it's been "alligator on a stick." I thought about trying it but just couldn't; I've had too many pet reptiles. A good last stop for the night is Isabel Burke Salt Water Taffy, home of Norman the taffy puller. $7.50 will get you a plastic box of taffy about the size of the carry-out box restaurants usually give you for a whole dinner. I have learned to buy these last because, even with the sack, they're a pain to carry around. G'night!

Hey Ace, thank you so much for mentioning Isabel Burke Salt Water Taffy. Unfortunately I can't find an email address to contact her. I was told that there is a different substance that's used for display purposes only. It's like taffy, but it can last for ever it the taffy puller machine. Would be great if you could contact me: janosch.parker@yahoo.com