Union Pacific steam locomotive 844 warms up on the morning of May 28, 2006, in Claremore, Oklahoma. 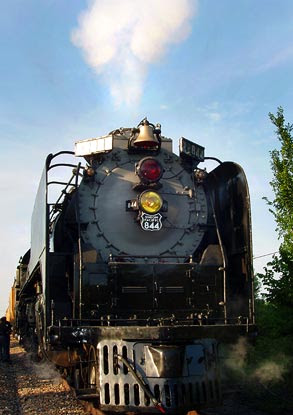 The locomotive and its train, the South Central Heritage Express, was nearing the end of it's 30+ day public relations tour. I had seen it in Kansas earlier as well as in Claremore the day before this.

But today I would not just see it; I would ride it. By the courtesy of the Union Pacific, writer Patsy Terrell and I would ride the train today all the way from Claremore to Kansas City.

I was allowed to ride in the locomotive itself for a leg of the journey, and I chose the first one, from Claremore to Coffeyville, because I had been advised that the cab got quite hot - 40 degrees hotter than the ambient temperature. So the morning was a good time to ride.

The cab of the steam locomotive was in stark contrast to all of the diesel locos I'd seen, the latest of which look more like small computer rooms. The engineer sits on the right, the fireman, on the left; you can see their arms. That's a door into the boiler in the middle. I shoot mostly on digital these days, but had to break out my 35mm in order to use a 20mm lens that gives about a 90 degree diagonal view. That's how small the cab is. 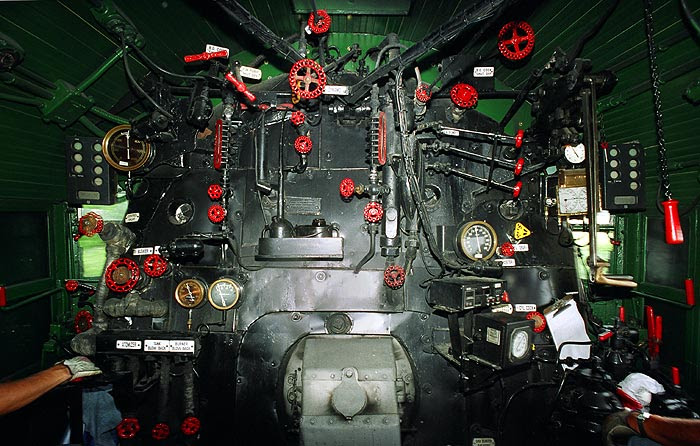 The controls, in this case some of the ones on the fireman's side, really underscored that I was riding in an antique. 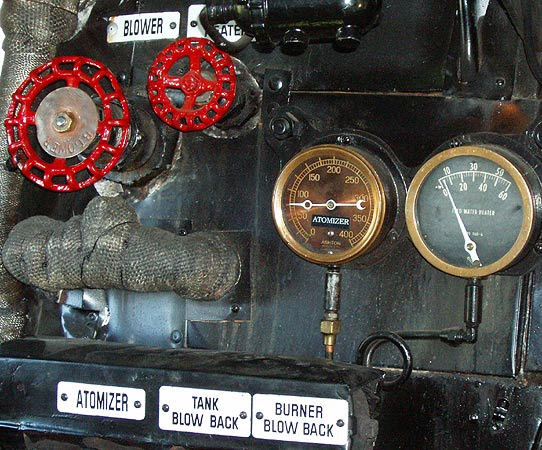 Engineer Lynn Nystrom takes us out as we pass viewers along Industrial Blvd. Although 844 made lots of noise in the cab, I barely felt us begin to move. I'm told this is the mark of a good engineer. 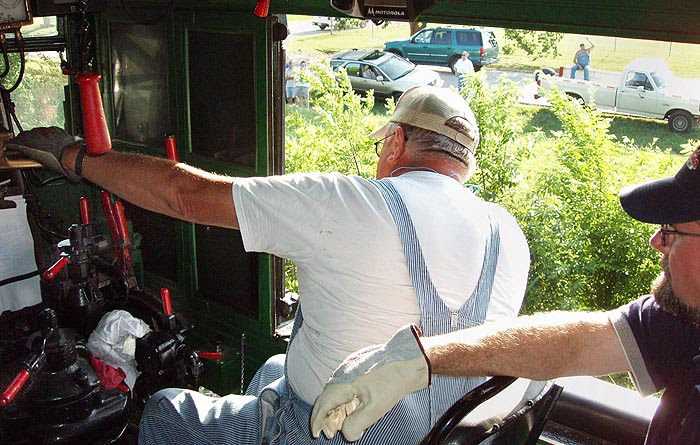 James Barnes, Director of Media Relations for Union Pacific, stands against the tender as we gain speed. Barnes is the person who approved our presence on the train. Speaking of standing against the tender, stability when standing up is a problem in 844; it's a rough ride. When you stand in the cab, there are actually two deck plates to consider. I am standing on the one for the tender. The one beneath is actually the locomotive. Since they are articulated, I sometimes found myself doing a slight version of "the twist" when standing with one foot on one and one on the other. 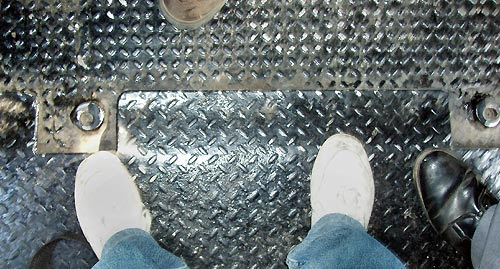 Changing lenses was fun, too...I think I probably looked drunk the times I would start to dock the lens to the camera body and I'd miss when we jolted a bit.

Barnes was the person who advised me about being in the cab in the morning and I think he was right. The breeze coming through the windows sure felt good, and this small skylight in the ceiling probably helped, too. The beadboard and the skylight reminded me of the ultimate kids' clubhouse. Officers of the Claremore police department get their pictures along North Industrial Blvd as we leave town.

Steam spurts from the sides of the locomotive on occasion. I hadn't seen it do this while still and wondered how trackside animals would react. The crew hosted a few other guests in the cab; this gentleman sported a UP engineer cap and the set of earplugs we were all issued. The cab is a very noisy place and made communication, be it "what's that lever for?" or "May I please lean over this way for a shot?", rather difficult. We all got by very well, though. 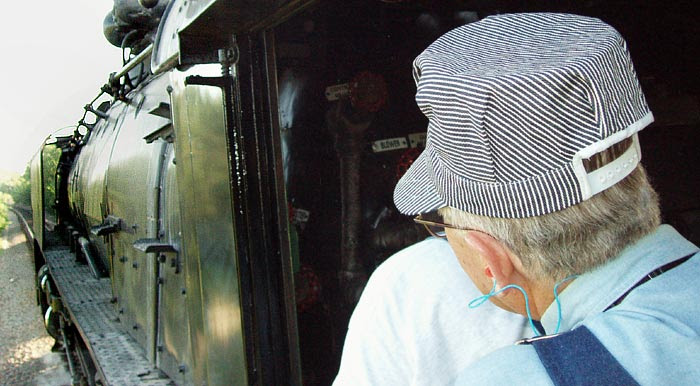 Fireman Rick Braunschweig monitors water, fuel, pressure, fire and other factors that control the steam the boiler produces to run the pistons that run the rods that run the wheels. I kept hearing a line from an old Genesis song, "Suppers Ready": "I know a fireman who looks after the fire." The boiler can be seen on Braunschweig's right. Occasionally, a small amount of sand is thrown into the boiler; this helps keep the flue clean through abrasion. Though the engine is black, it reflects some of whatever color is around it. For the first of many times today, I would see it tinged with green from the foliage. 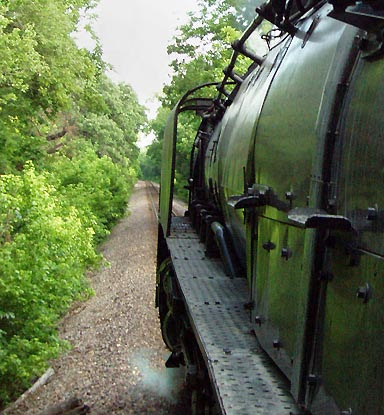 Engineer Lynn Nystrom works the throttle. At times I would see him lift slightly off his chair as if this was something he had to throw his weight into. I've seen diesels operated and this seemed like it required much more attention and sensitive interaction. 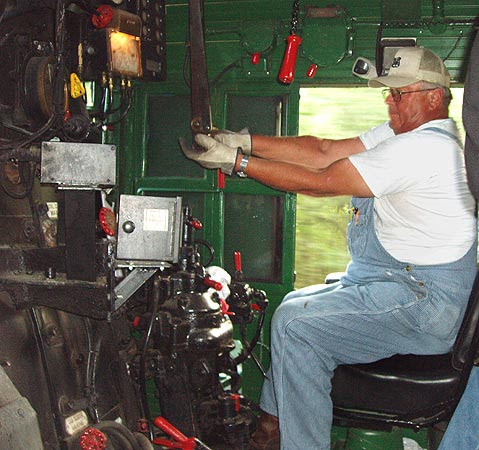 I'm pretty sure this is the Verdisgris River. We would cross over it a number of times today as it serpentines back and forth across the generally straight UP tracks. Did I mention that 844 is FAST? This thing is like a huge steam-powered sports car. I didn't see our actual speed but was told it was just a hair over 70, and 844 can go a *lot* faster if they let it. Its only practical limitation is what the curves and condition of the track can handle.

The wind wings of the engine were not much of a hindrance to the view. Also called "elephant ears" or "smoke lifters", they help channel the exhaust away from air intake ports farther down the train I think this was Oolagah, OK. I was struck by the height of the cab when we looked down on viewers. Of course, the ballast boosted us somewhat, too. Whenever we were alongside a road, there were railfans paralleling us. There wasn't huge mass of them most of the time, though. I saw no near mishaps, despite the amount of railfan-driven cars beside us. This is alongside OK 169. Man, I wish I had a copy of this guy's tape. I had been warned by an editor who had ridden the train previously that it puts out a lot of water droplets. He was right. This is the fireman's view and you can see the droplets on the glass. And always there was the smoke and the sky. Air pollution never looked so good. This guy probably thought so too. Railfans jockey for position alongside 844.

Railroad employees had a more tolerant view of railfans than I expected. None of the ones I questioned said they'd seen any mishaps. This is a view out front with some of the fireman's controls. Was Ace Jackalope with me? You bet. Periodically some of you write to remind me that this is a supposed to be a chronicle of *his* explorations. He doesn't say much, but he observes a great deal. Engineer Lynn Nystrom pulls the chain that activates the whistle as we approach a crossing. We made great time to Coffeyville...too early for my tastes as we made it in about 90 minutes. A friend of mine had missed the train south of town by assuming it'd be on schedule. In fact, it would run ahead of schedule the whole day.

I wonder how many pictures were taken of us that day? After I left the cab, I noticed we'd pulled up alongside a Canadian diesel locomotive. Such "pool units" are common; when railroads need more power, they lease it from others.

My ride inside 844 was over, but I still had a trip back in the passenger coaches, all the way across Kansas, to look forward to. This is the third in a four-part series on 844. Why so many parts? Because shooting on digital is cheap and, even with film, I have no self control.

No self control, my dear??

Ah...but 'tis what we love about you!