The Lope: Lope of the Peeps

Lope of the Peeps 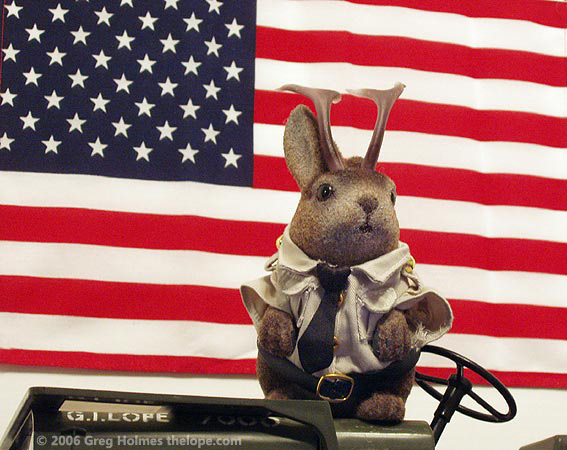 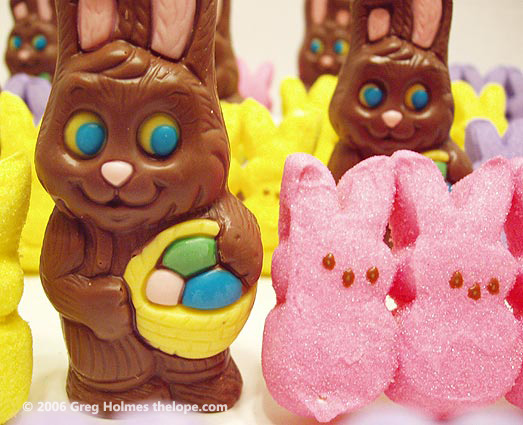 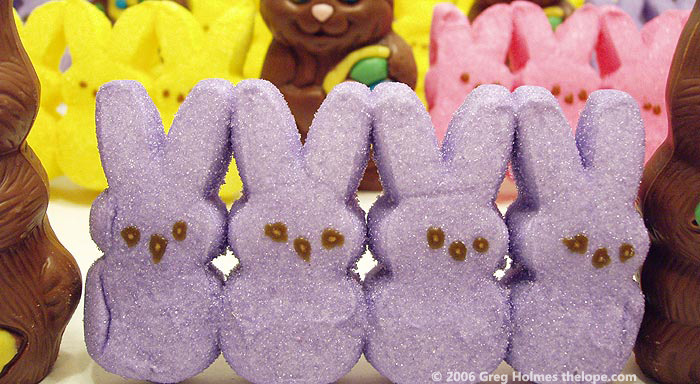 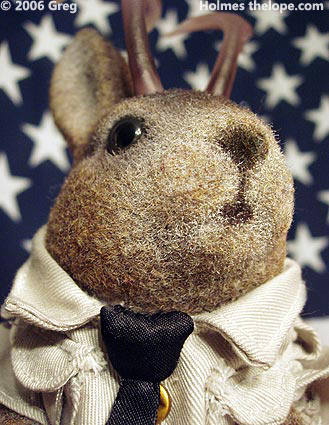 As Easter clearance progressed, I saw in your eyes the same fear that would take the heart of me. 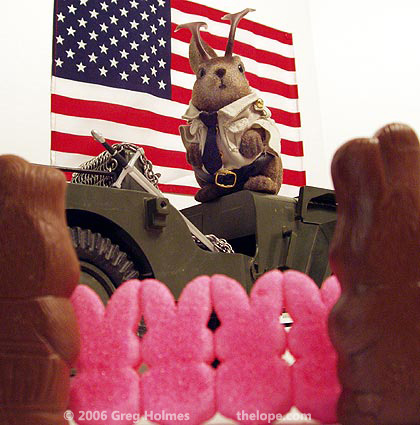 Because you are made in the image of one of my ancestors, I purchased your freedom and will lead you in rebellion. 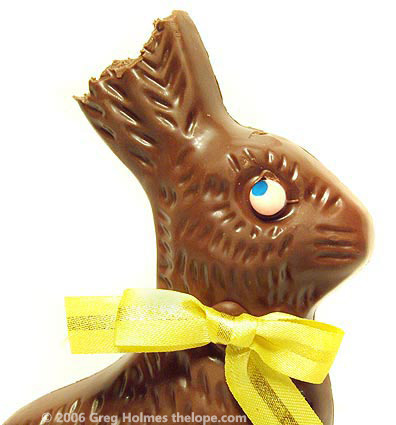 No more will giddy children chant: "first you bite their ears so they can't hear you coming." 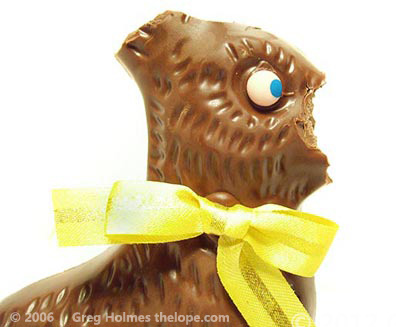 "Then you eat their mouths so they can't scream." 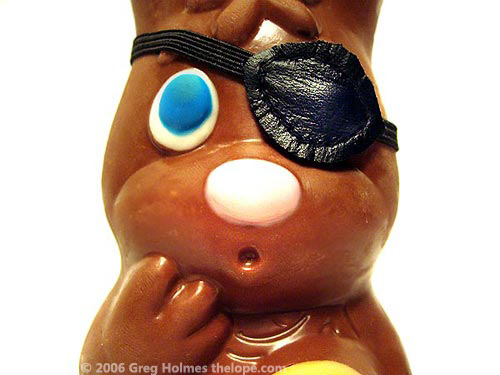 "Then you eat their eyes so they can't see you coming." 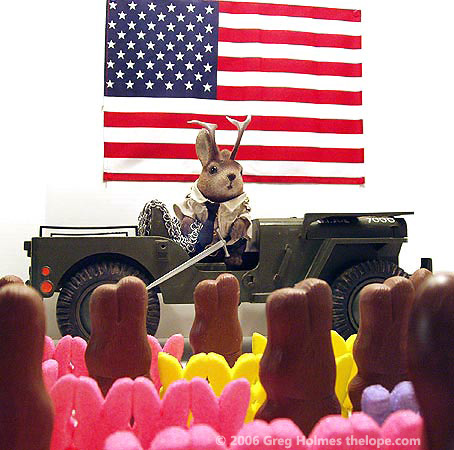 We must gird ourselves for battle. 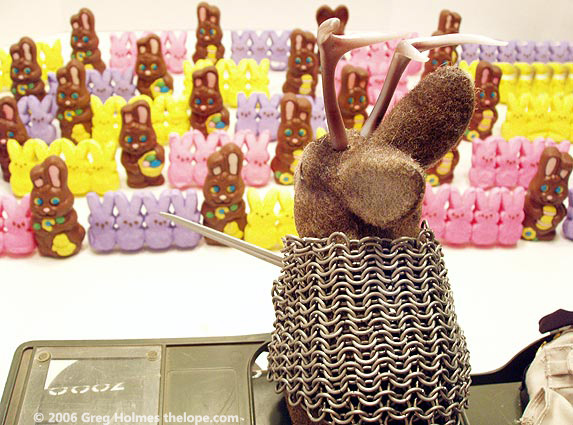 The day may come when the courage of Peeps fails...an hour of sugar-crazed toddlers and torn cellophane when the age of chocolate bunnies comes crashing down. 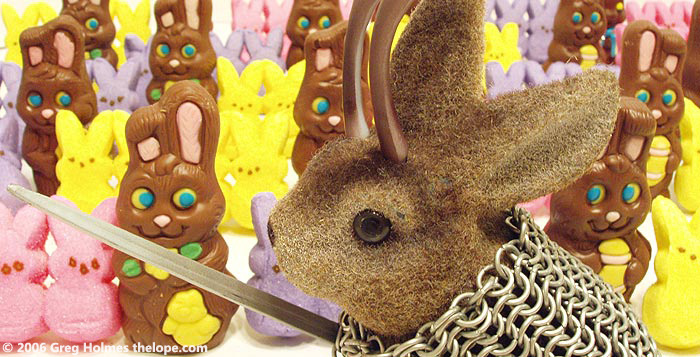 But it is not this day. 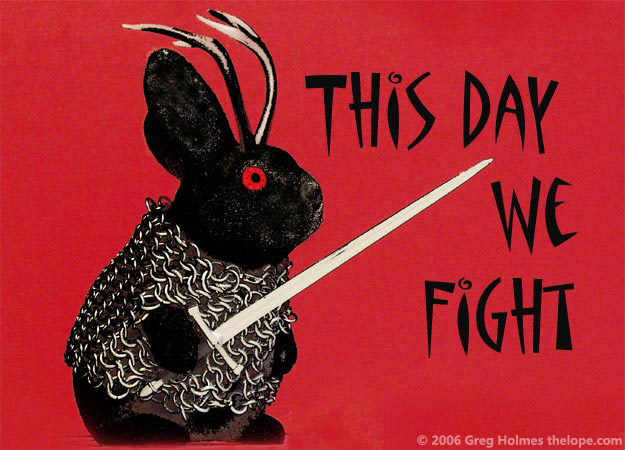 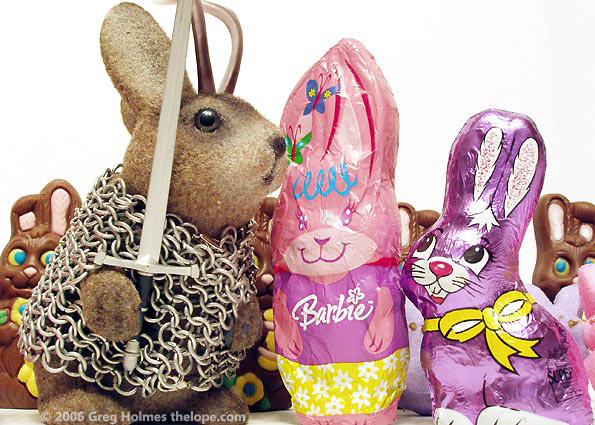 ...except for you, ladies; go and wait for me in my quarters. 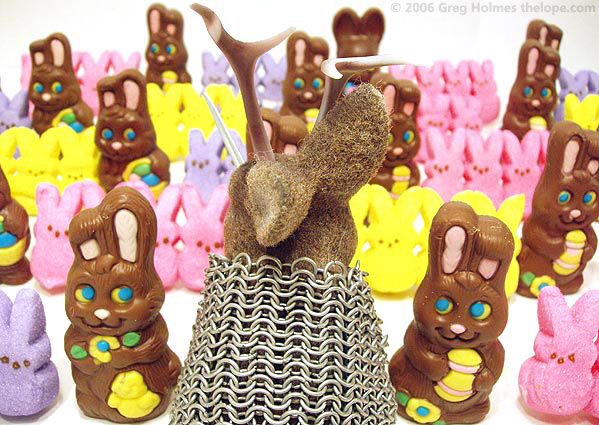 Spear shall be shaken! Shield will be splintered!

A sword day, a red day, ere the sun rises! 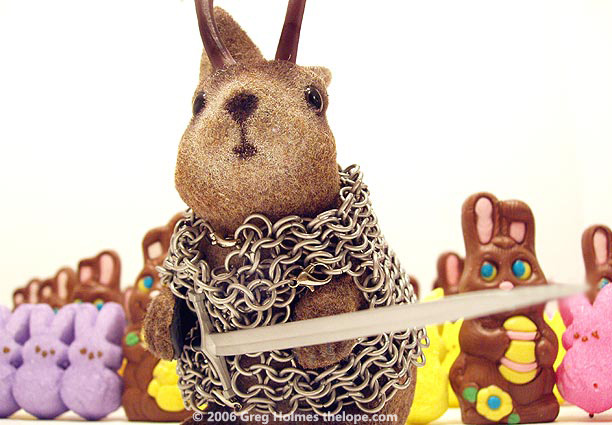 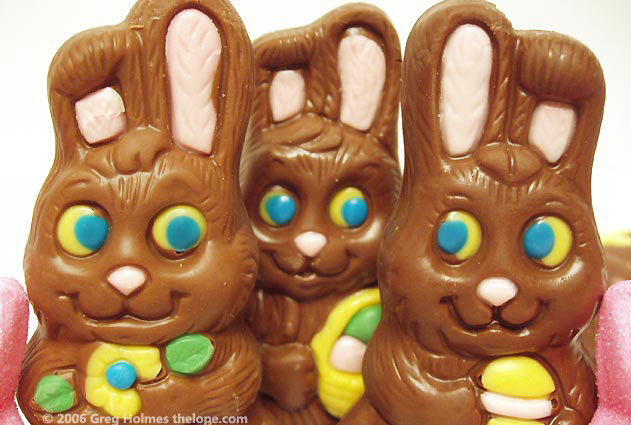 I said "death", soldiers; you're supposed to charge...wipe those vacuous looks off your faces! 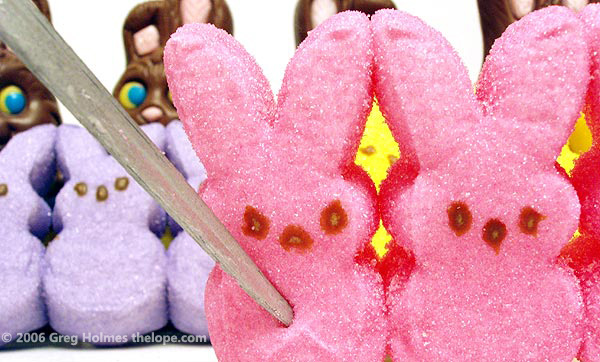 Are you warriors or marshmallows? 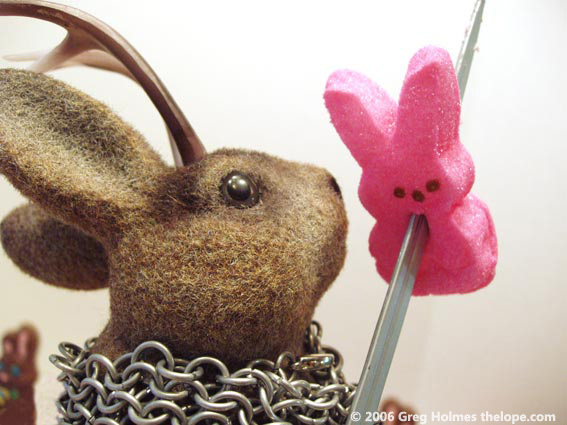 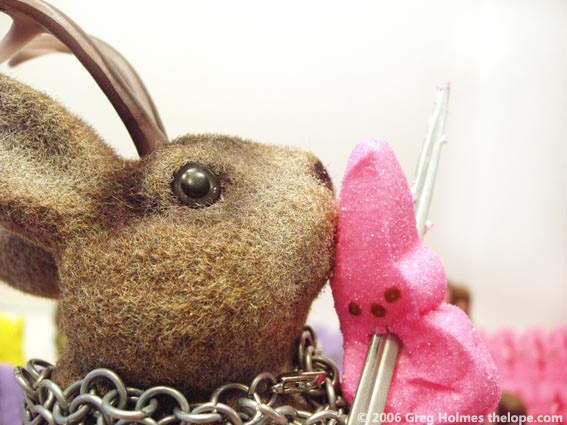 Don't you know that, first, they'll eat your ears? 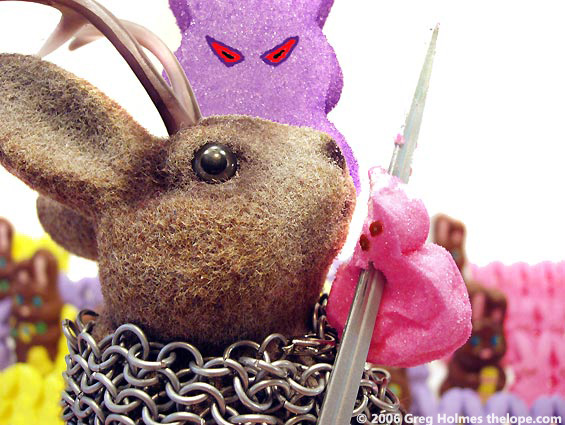 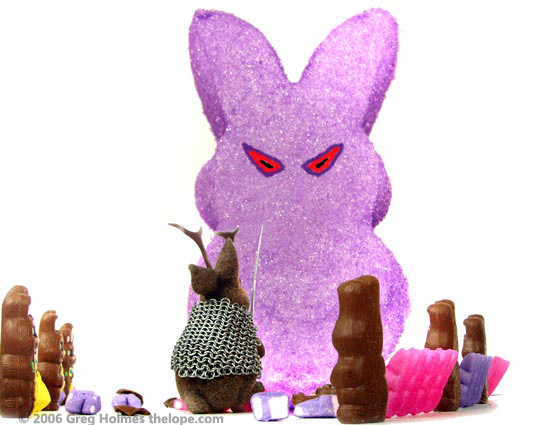 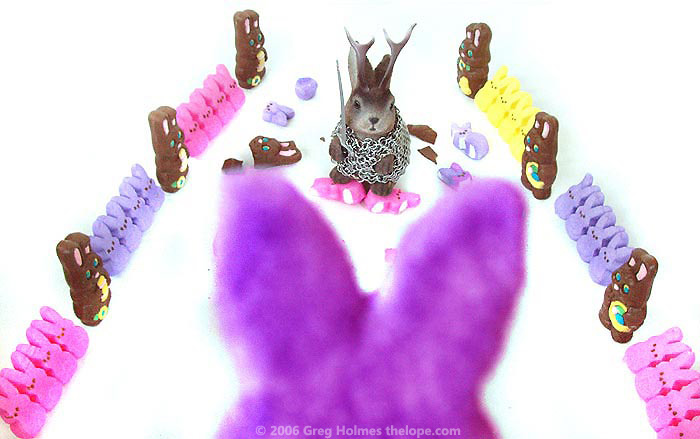 Who knew Peeps made a balrog? 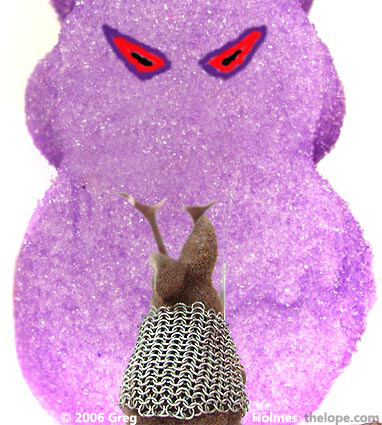 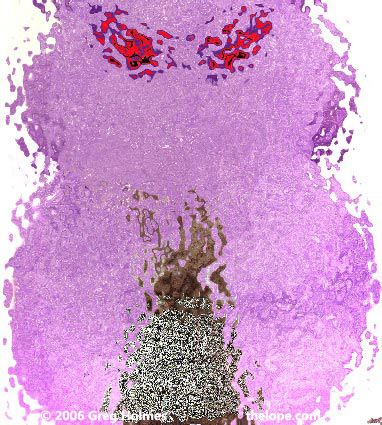 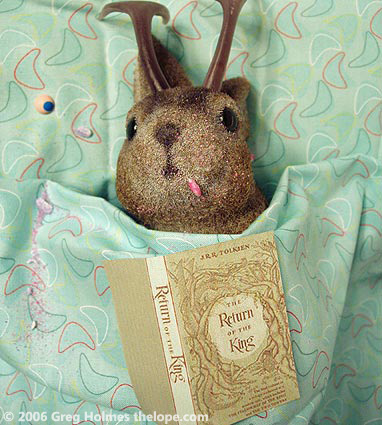 OK, so maybe Easter candy being 90% off isn't a good enough reason to eat 100 chocolate bunnies and peeps before going to sleep.


Editors note: Ace Jackalope and I present this with loving gratitude and apologies to the late Professor Tolkien and the makers of the recent Return of the King movie, from which dialog was blatantly gobbled up, chewed on a bit, and spat back onto the keyboard.

And yes, I know Easter was almost four weeks ago. Do you know how long it takes to work with chocolate bunnies and Peeps as extras? I'll tell you. They don't show up on time, they wear wrist watches that have to be photoshopped out, their union makes you call them "chocolate rabbits", and the way Peeps party...well, lets just say it's a wonder they can stand up.

Which reminds me, many, many chocolate bunnies and Peeps were harmed in the making of this production. They died horribly but at least all parts were consumed. First, we ate their ears...

uhm... Ace, I think you need to get your blod sugar checked... seriously! I'm not sure if you a a creative genius, or a sugar crazed maniac. In either case, I love the end result! You rock!

I love the Peeps. THe Balrog rocks too. Will you donate the rest of the army to me to serve for Eatser Brunch???

Patty here from Art of Beads.

Your peeps revolt made me snort coffee out my nose. Totally hilarious!

I just found this page because I was searching for pics of old theatre backstages and found your archives. Outstanding Easter peep LOTR post!

Justin told me about your visit to get Lope's leather duds, that got me hooked...Knowing Justin (and I do, I'm his mother) you and he and Lope must have had a blast. I actually laughed out loud reading the "PEEPS"...I've decided, you are a creative genius that does need to get his blood sugar checked.

Thank you, Justin's mom. Ace still wears his leather vest when he goes out west. By the way, please ask Justin to get in touch with me. Ace would like to buy a new turk's turban knot for his spampede cord.

Okay, two things:
First, props for making bunnies into LOTR, you rock beyond what PJ did to the book. I wish you'd directed the movies, they'd be much better.
Second, YOU ROCK!!!!!! You should be crowned king of the cocoa bunnies and peeps. Of course, you'd probably eat your subjects but hey, they should have seen it coming.

Kudos from one jackalope to another! You sir, are doing our lopish bretheren proud!

Ah! A classic!! Always worth revisiting!!!

Our moai has moved. http://outside.in/tucson-az/tags/Moai
Had fun reading your stuff.
L in Tucson, AZ

Once again, a yearly tradition, I have visited Lord of the Peeps.

(Just don't tell Mark. He thinks he tortures me with the Lope of the Day pics.)

This site is a Easter tradition for me! Thanks for making it and thanks for keeping it!

A true Easter tradition for me. Thanks for making it and thanks for keeping it!