In attendance was Dean Walker, President of the Kansas Historic Route 66 Association. Dean is credited with being a large part of the inspiration for the personality of Mater the tow truck, a character in the Disney/Pixar film. 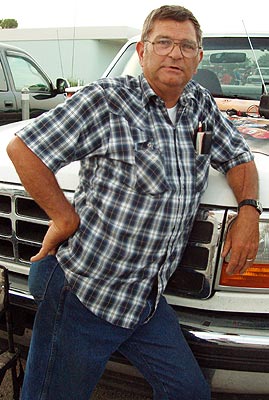 He and his wife, Paula, are among the people thanked in the closing credits of the film. I found them to be a wealth of information on Route 66, not only in the MO-KS area but westward as well. 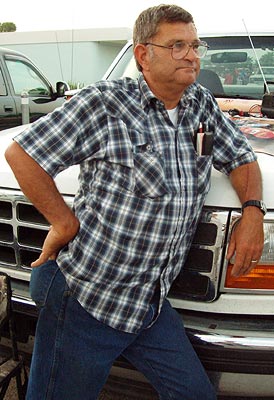 Dean Walker demonstrates the reason they call him "crazy legs" and poses with Ace Jackalope and fellow movie-fan, Landon Mynatt. 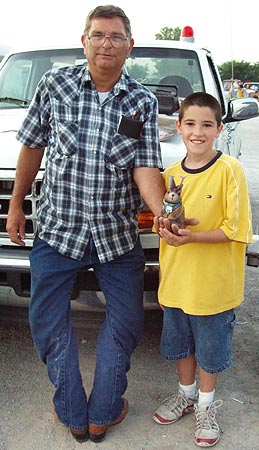 I asked Dean if this was uncomfortable. He replied: "Would you believe in ten seconds I'll start telling people to start taking all the pictures they want before I count down to ten...you'll see the pain in my face but where it really gets me is in the hip sockets." 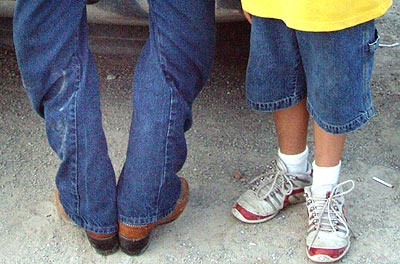 The idea for the "Mater" character began when the film makers saw a rusty old tow truck in Galena, KS on a scouting trip for the film several years ago. Walker told me that, unfortunately, the actual tow truck on which Mater was based is no longer in Galena; the property has been cleaned up and the truck was gone as of April 10 of this year when another film crew looked for it.

Here, Dean has signed a McDonalds Happy Meal toy for me.

Paula Walker is writing her own book: "To Hell and Back on Route 66." Dean referred to their dog as "Rosco the Route 66 Mutt." I seem to run into transportation-named dogs of late, having just met "Barley the Choo-Choo Dog" last month while photographing a train. 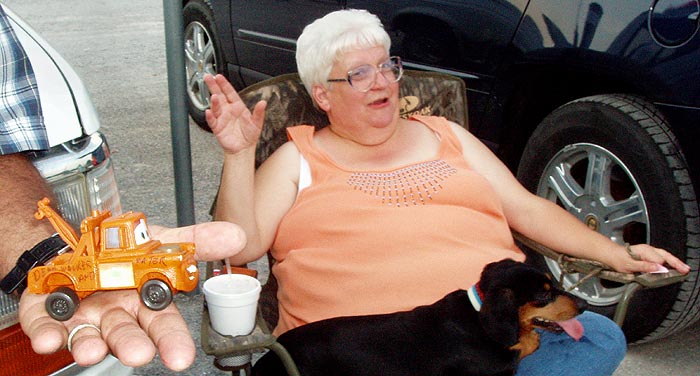 A nice little Americana moment at the drive-in: Before the movie, the Star Spangled Banner plays.

posted by Ace Jackalope at 9:33 AM

Myself and three friends met "old crazy legs" while bicycling down the '66 (we just happened down this famous route while biking our way from Canada to Mexico).

We were pedaling along when we noticed a white pickup pulled over ahead of us. Thankfully it wasn't some yahoo about to yell at us for cycling on the shoulder as we had half-expected.

The fellow was strange but very friendly, and he turned out to be very interesting as well. He got one of us to kick his legs backward and said a Disney character was based on him. He said he was waiting on the shoulder for 25 Norwegian Harley riders.

We took our picture with him and got ready to continue on our way. As we were leaving, sure enough, a convoy of Harleys whiz past carrying large Norwegian flags.

We really enjoyed meeting this interesting man - Glad to hear that we're not the only ones!