We've long been anticipating the opening of the Disney/Pixar movie, "Cars", ever since we learned that John Lassiter and crew had traveled Route 66 seeking material and inspiration for the film. In fact, we had seen graffiti and certificates left behind by Lassiter last August when we traversed a good portion of Route 66.

We had chosen to see the film at the 66 Drive-In Theatre on Route 66 just west of Carthage, MO. It seemed the only fitting choice for us.

We arrived 50 minutes early for the 9:05 PM showing; as we approached from the west, this is what we saw ahead.

Cars...so many of them pulled over and driving along the shoulder of 66 toward the theatre that you could barely discern the theatre itself in the distance. While my lovely significant other and fellow 'lope driver saw to the foreword progress of our car, I walked down for a closer look and to get a few pics. If we weren't going to get in, I was at least going to leave with something.

This is the view from in front of the theatre, looking west down Route 66.

And here's the fabulous place, itself. Just look at it. Does it not bring back a flood of childhood memories to the average baby-boomer? 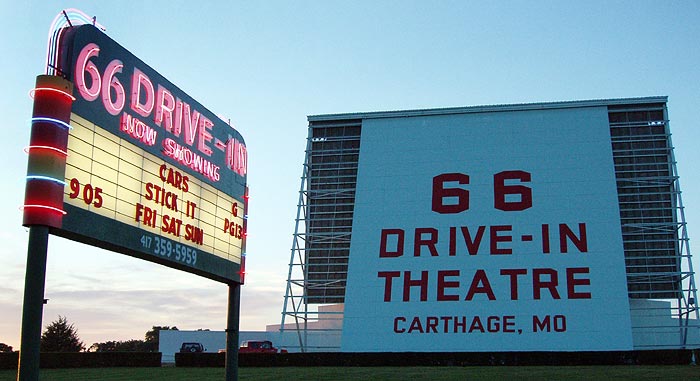 Here's a better look at that marquis with the traffic behind.

An employee told me that the boxed portion of the screen is original to the 1949 opening of the theatre and that the two 14-foot extensions were built on the sides in 1955 to accommodate CinemaScope wide-screen movies. 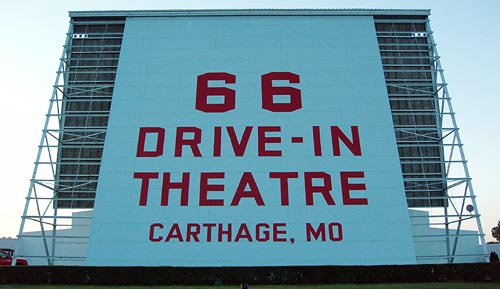 A plane circled overhead; no-doubt they had an amusing view of the duel lines of cars trickling into the grounds. 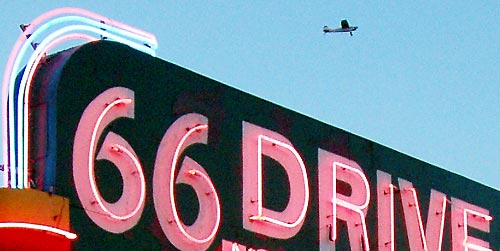 I watched as car after car entered, each taking a precious parking space. Finally, I spotted our car at the ticket booth and hopped in. We forked over $5 each to see the double feature - a bargain, if you ask me.

After we settled in a spot in the last row (best we could find), I walked back out to admire the ticket booth. I got just a couple of pictures and was still playing with the exposure when the ticket booth and the marquis went dark. There was no more space and an employee estimated that about 200 cars had to be turned away. 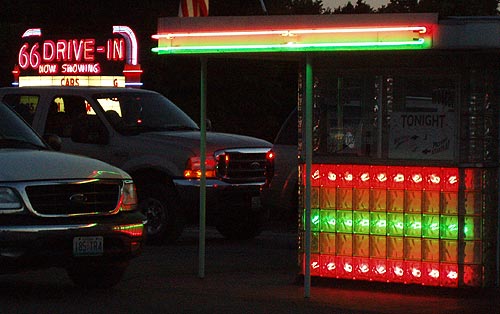 On the way back in, I noted the nice retro graphics on the audio announcement.

Back inside, I had forgotten that drive-ins had playgrounds. 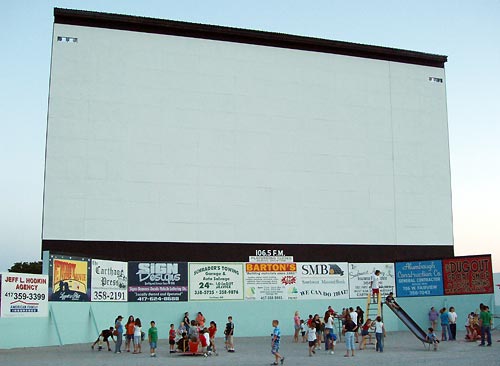 I took a few of these cloud silhouette shots before heading back to the car.

Back near our car, I admired the way this family had colonized their space. According to co-owner Wes Alumbaugh, The width of space is now twelve feet and is intended to hold only one car and the accompanying lawn chairs and such; originally it was eighteen feet and a space housed two cars. This has had the effect of shrinking the capacity of the theatre from 540 to 400 spaces. 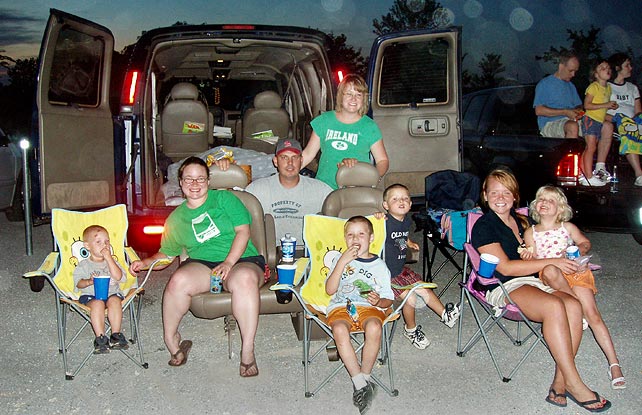 The movie was thoroughly enjoyable and lives up to the hype given it by Route 66 aficionados these past few months. 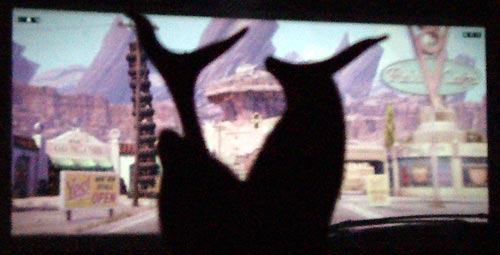 The flavor of many locations along the mother road, along with the general feel of traveling the southwest portions, was well conveyed. Ace and I have been many of these places with friends, and met a few people that inspired characters, but that is another post.

In the meantime, I highly suggest that you check out a post called A Route 66 guide to the Cars movie over at Route 66 News.

As the movie concluded, the clouds that had been to the west started doing fun things in front of the nearly full moon. We had actually seen a meteor earlier, too...what a bonus! 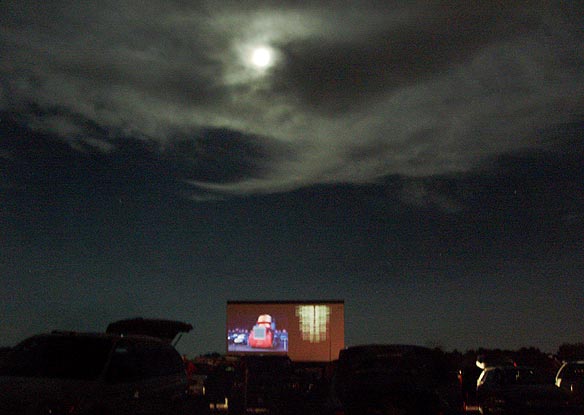 We skipped the second feature and lingered outside to admire the place. 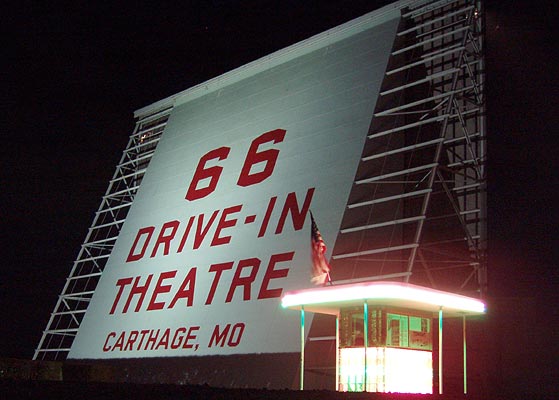 You couldn't ask for a cooler ticket booth. 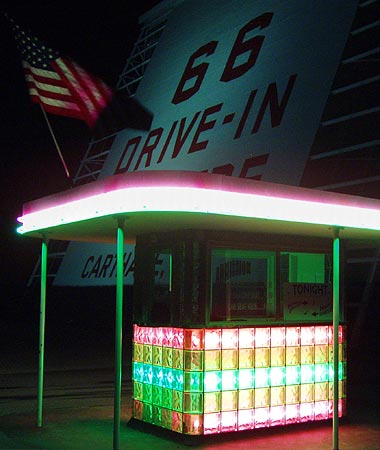 I don't know why they had turned it on again, but I was happy. Maybe they had shut off the lights earlier just to signal waiting motorists that it was sold out. 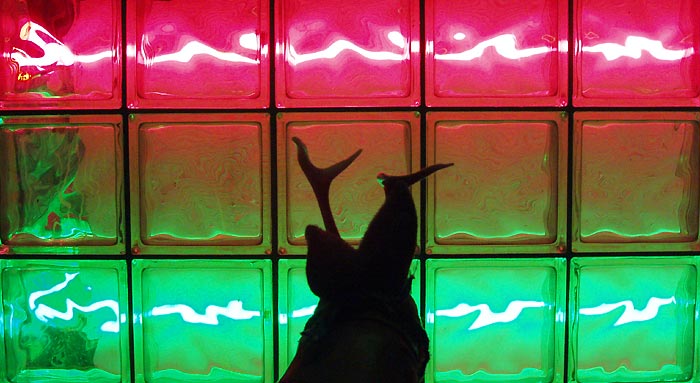 A group of classic cars (oh...and the people driving them...sorry, was caught up in the idea of anthrpomorphic cars in the movie) exited the theatre after "Cars." I don't know much about automobiles, but I know what I like, and I like old, cool cars parading past neon. This was a group of Norwegians which you can read more about in this article in the Springfield News Leader or at the website for Cruise66, the name of the Norwegians' four-week Route 66 tour. 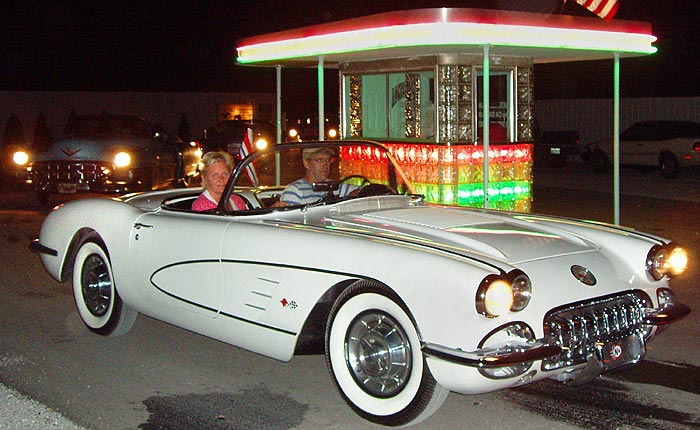 Update: We went to the 66 Drive-In again on Sunday night and met Dean Walker, who furnished some of the inspiration for "Mater" the tow truck...more to come.

UNBELIEVEABLE!!! This is my hometown!!
Graduated in '65. Can't tell you how many times I was here. Great place for making out!!
The stories I could tell.
Maybe I will if there is any interest.