The Boots Court, a restored 1939 motor court on Route 66 in Carthage, MO, hosted a celebration April 9, 2016, to commemorate the recent installation of green architectural neon that resembles what it had in earlier decades.

"Architectural neon" refers to neon lighting that, rather than being on a sign, is used to decorate or to outline the form of a building. This design was above many of the Boots' windows. 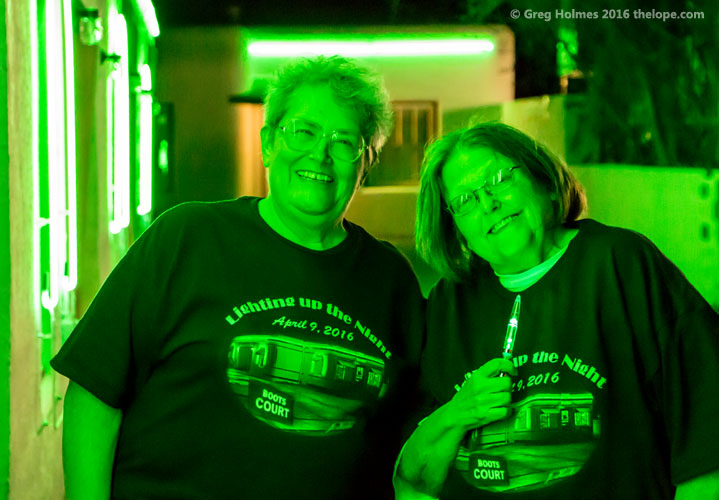 Sisters Deborah "Debye" Harvey (left) and Priscilla "Pixie" Bledsaw bought the motor court in 2011 and have been very efficient in step-by-step restoration of the place to its 1940s appearance. 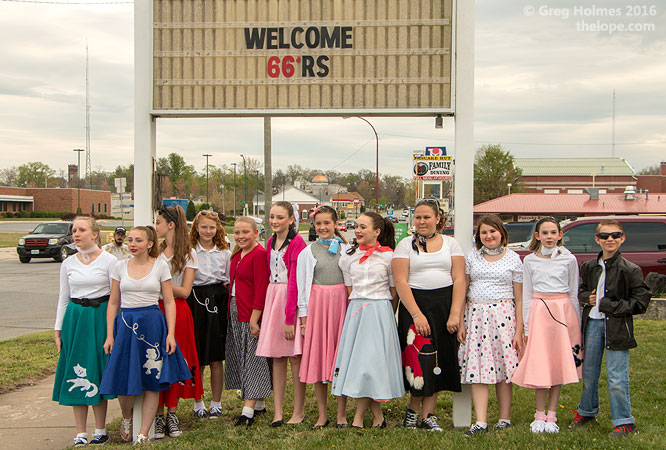 About 220 people attended from several states. In pre-dusk festivities, there were kids in stereotypical 1950s attire. I guess it's easier than say, 1939 attire. 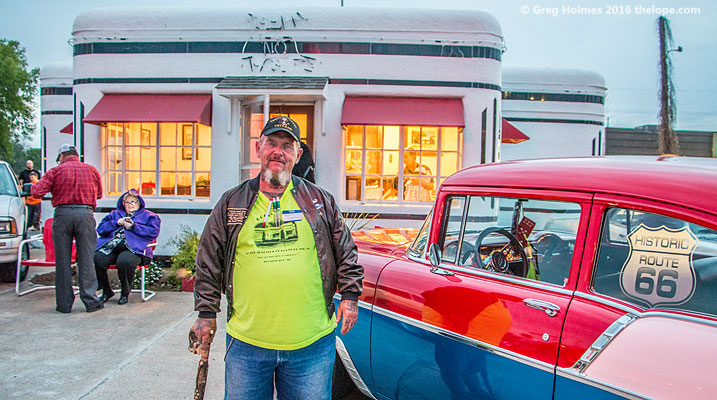 I ran into an old friend from several previous Route 66 gatherings. Ron "Tattoo Man" Jones stands by his Route 66 themed car. He is known for over 80 tattoos on his body that depict Route 66 landmarks, including the Boots. 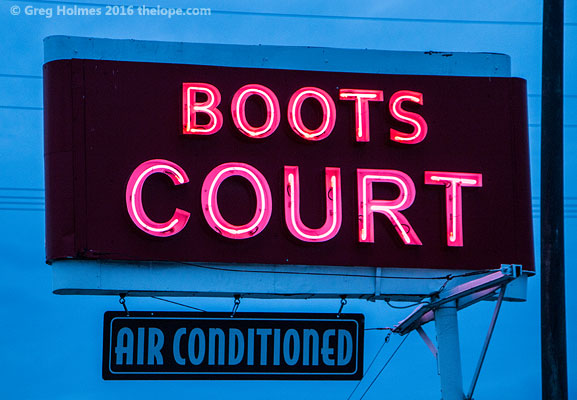 In a previous step toward the Boots journey to its classic appearance, Ron paid for restoration of the Boots Court neon sign. He told me he had inherited a bit of money and thought this would be a good thing to do. 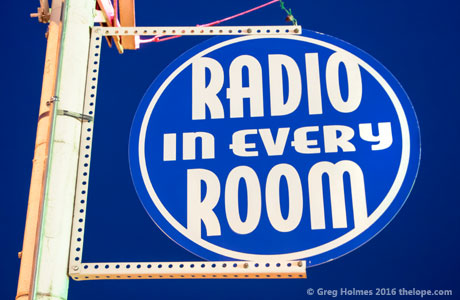 A metal sign on the pole promises a radio in every room. 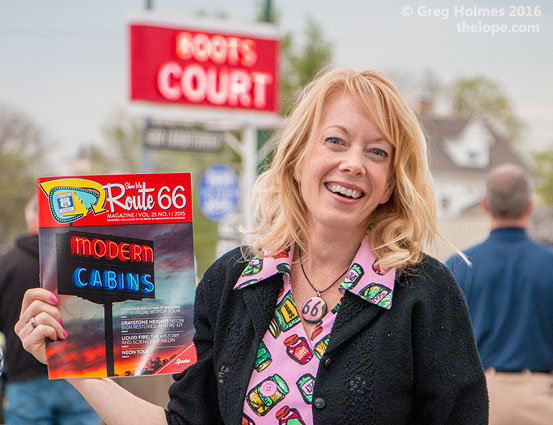 I met some new people as well. Jennifer Cox, supporter of the Neon Heritage Preservation program of Missouri, holds an issue of Show Me Route 66 Magazine that features articles about neon along Missouri's stretches of Route 66. 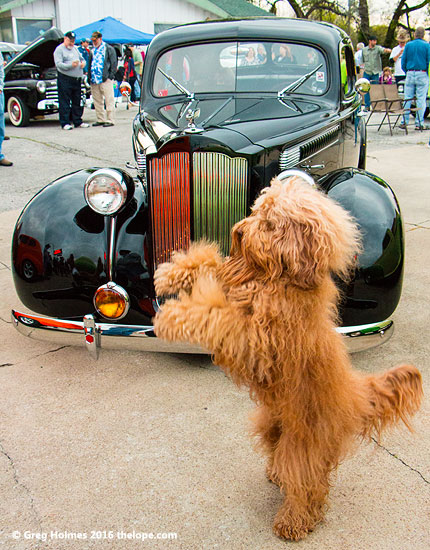 Pitot (named after part of an airplane), nicknamed "Pete," entertained the crown by standing on two legs. Pete is an Australian cobberdog, a type bred for people who need guide dogs but who are extremely allergic. I was told Australian Copper dogs do not shed. The car behind him is a 1939 Packard 6 Sedan (highly modified) owned by Dale Janssen of Joplin, who is also one of Pete's humans. 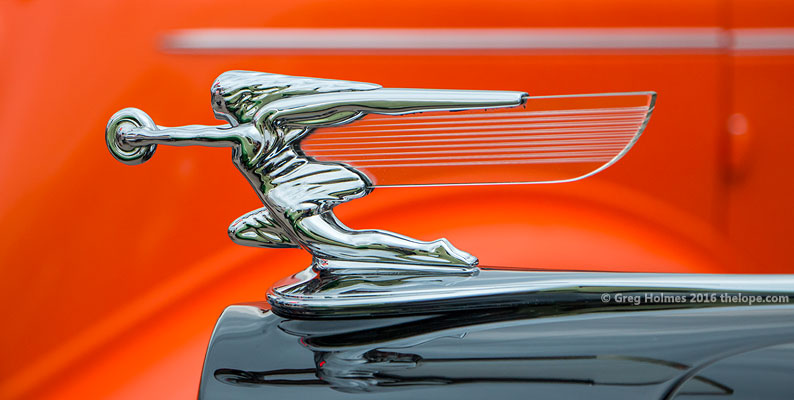 I quickly became infatuated by the Packard's hood ornament. 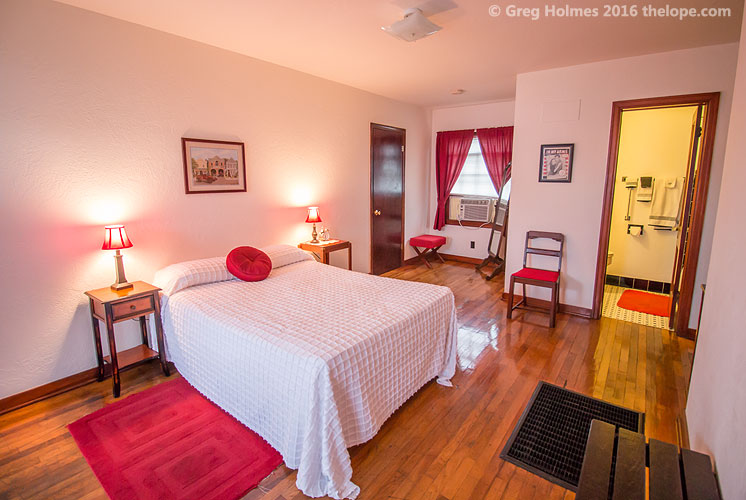 A room at the Boots was open for touring. They only rent five rooms for the time being and they were booked up for this night. 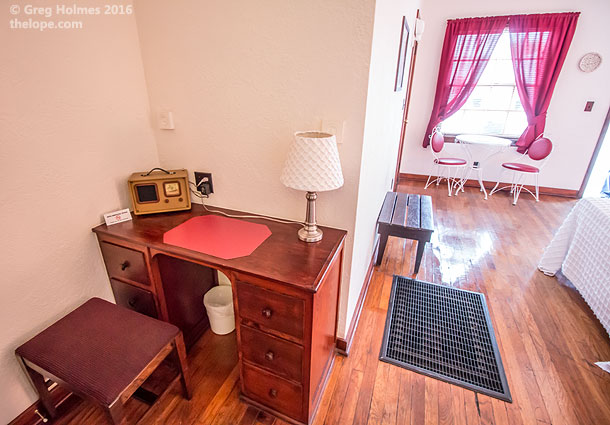 The "radio in every room" is on the desk.

Commemorative green LED pens were given out with the request that they be held aloft when the switch was thrown to turn on the new neon.


And here's a little video I made of the countdown and the actual lighting. 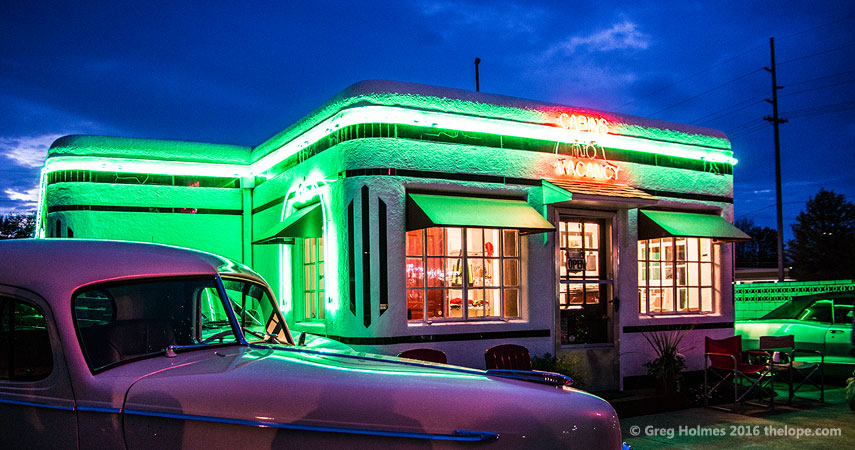 After the neon was turned on, I scrambled to get as many angles as I could before it was truly dark, a condition accelerated by an impending rain storm. 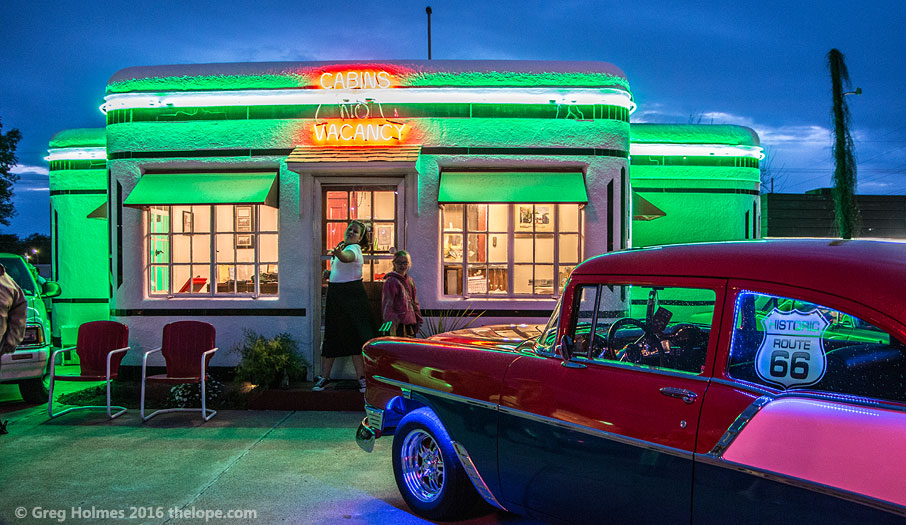 Ron's car has color-changing lights so I had fun with that. 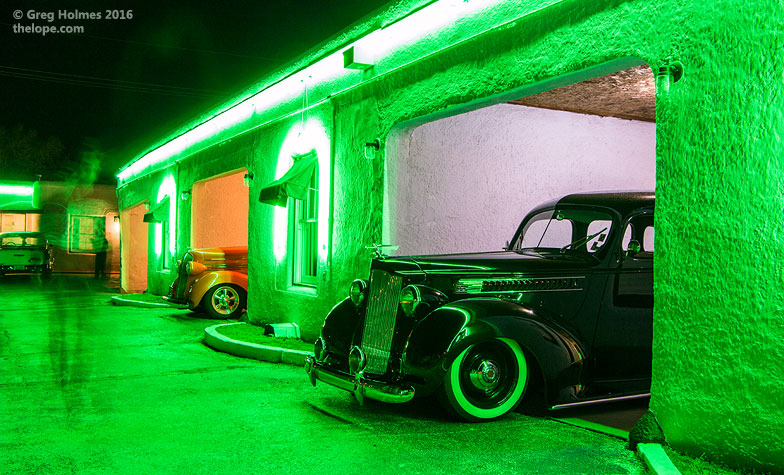 Is that a ghost? Nope; someone just walked through one of my time exposures.

...more of my infatuation with that hood ornament. 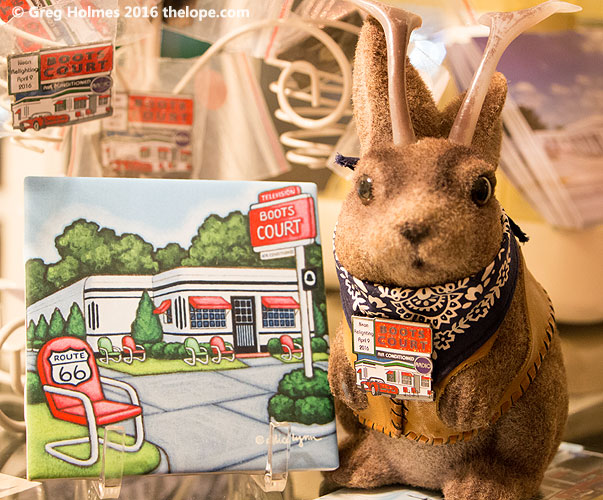 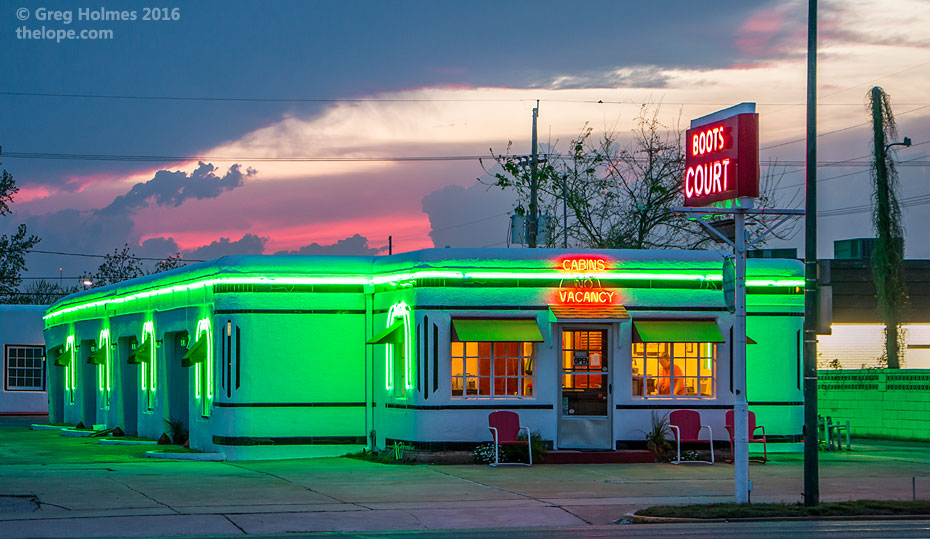 I came back the next night (April 10), and the western sky was generous.

And the night after that (April 11), I returned to chase the crescent moon. But this wasn't quite what I wanted so I went home and came back a couple hours later. 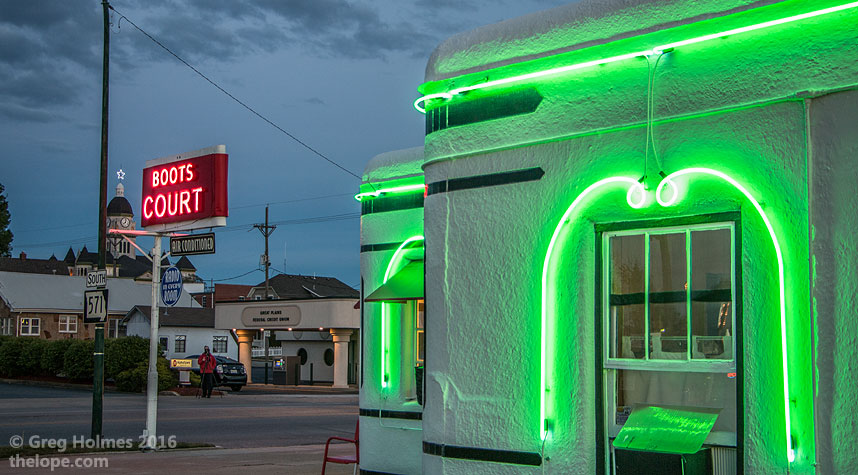 In the background you can see the Jasper County Courthouse with the star atop it. I had thought the star was only there in the Christmas season. 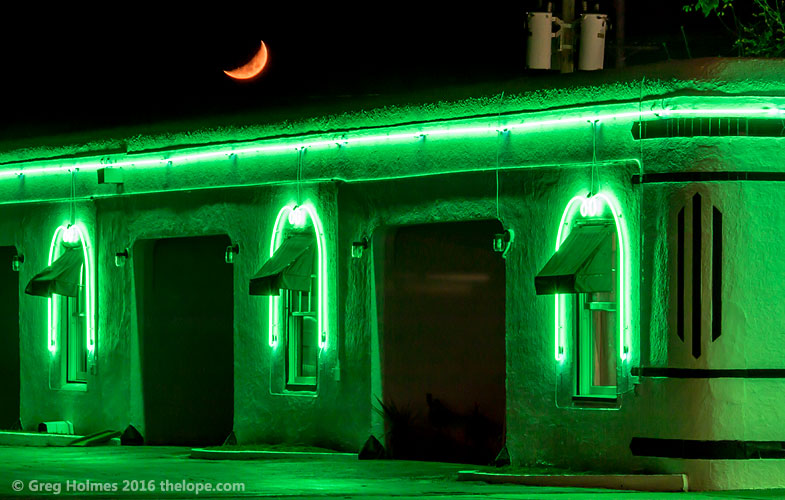 I got what I wanted much later, when the setting crescent moon had to shine through layers of Kansas smoke.

posted by Ace Jackalope at 1:53 PM

Very nicely done. This was the first I'd heard of the lighted pens.