In 2006 I went a little crazy and used dozens of Peeps and chocolate bunnies in a table top epic, starring Ace Jackalope. It was also a great way to reuse my childhood G.I. Joe jeep. The result was Lope of the Peeps. Many peeps and bunnies were injured, but they would have been eaten anyway. 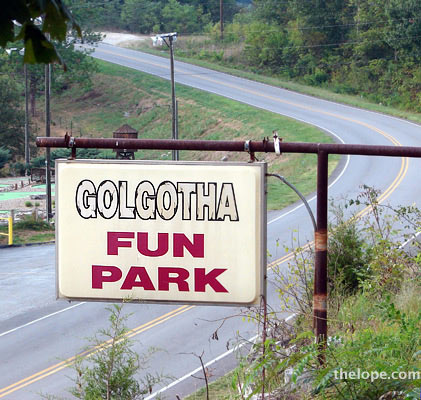 Yes, someone actually named their mini-golf course after the hill upon which Christ was crucified. Visit Golgotha Fun Park.. 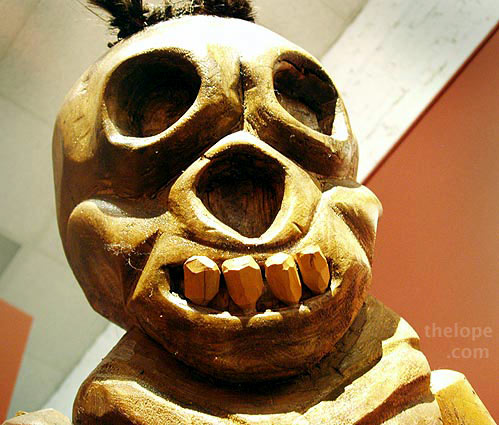 Easter - a time of Spring and renewal...what a lovely time to think about death. Read about Doña Sebastiana in Death Cart. Better yet, go visit her at the Hutchinson Art Center.

Please enjoy this Easter egg tree in Joplin, Missouri. The house at which these trees reside was heavily damaged, but survived the 2011 tornado. 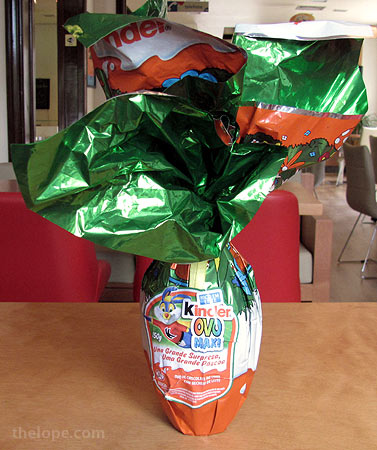 Two years ago, Ace journeyed to Brazil and Argentina with film-maker Steve Holmes. Among other things, they encountered the delicious prize-filled chocolate Kinder Surprise eggs that are sold in many countries but not the United States because they have a "non-nutritive object" - a toy, inside. See Ace's travels in Ace Does South America and read more about Kinder eggs here. (photo by Steve Holmes) 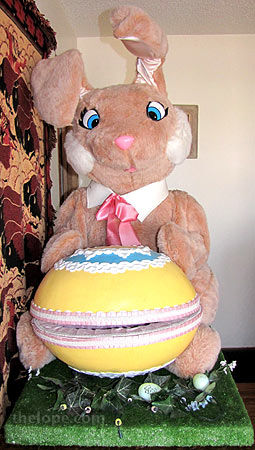 One of my hobbies is documenting animated store window holiday displays. Here are a few motorized Easter automations. 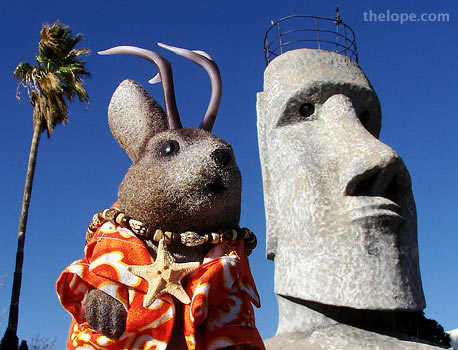 It's been a tradition here to run photos of Easter Island moai on Easter. Please enjoy Happy Easter Island and More Easter Stuff. 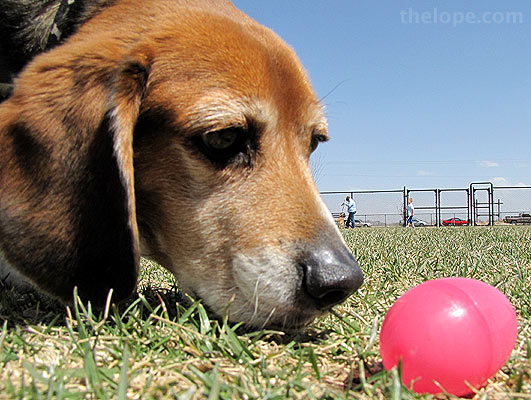 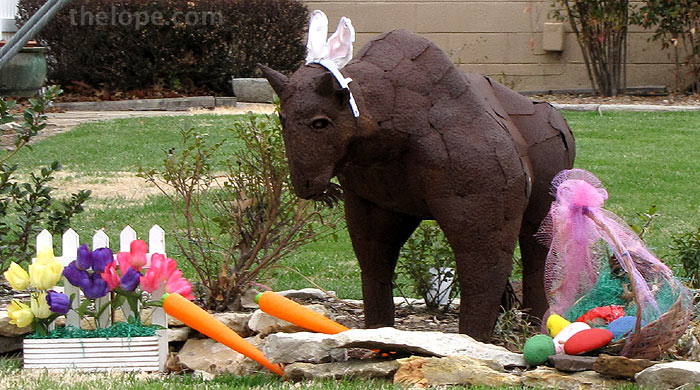 The folks on the northwest corner of 30th and Adams streets in Hutchinson, Kansas, often decorate their metal buffalo for holidays. This is their 2009 Easter Bison. 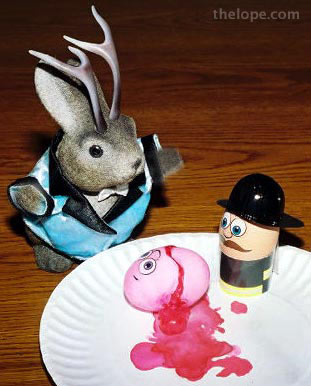 I hope your Easter eggs coloring went better than did Ace's.

And now, some images for the more religious aspects of the holiday...

This is an early 17th century German (probably Bavarian) ivory crucifix in the Phoenix Art Museum. The artist is unknown and the cross and nails are modern. 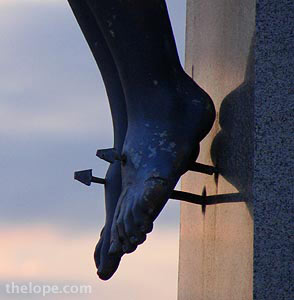 Groom, Texas, above and below 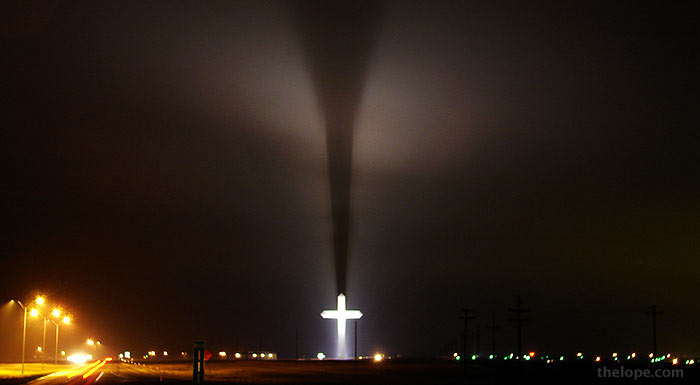 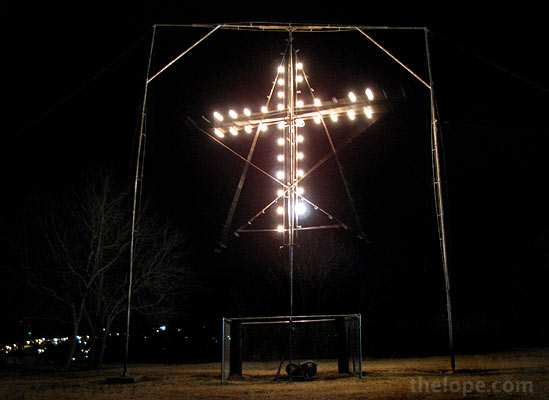 The city of Fredonia, Kansas, has an illuminated framework on a hill that can be used as a star at Christmas or a cross at Easter. 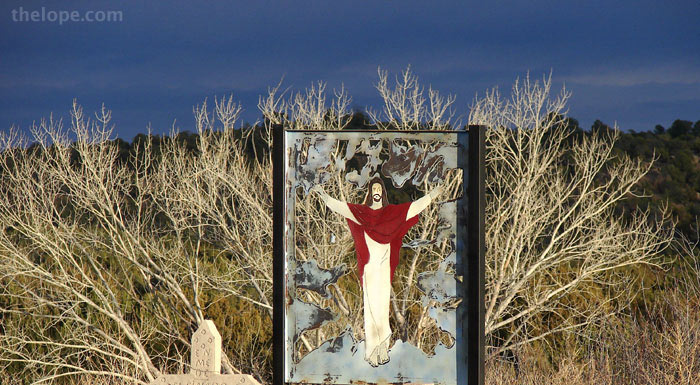 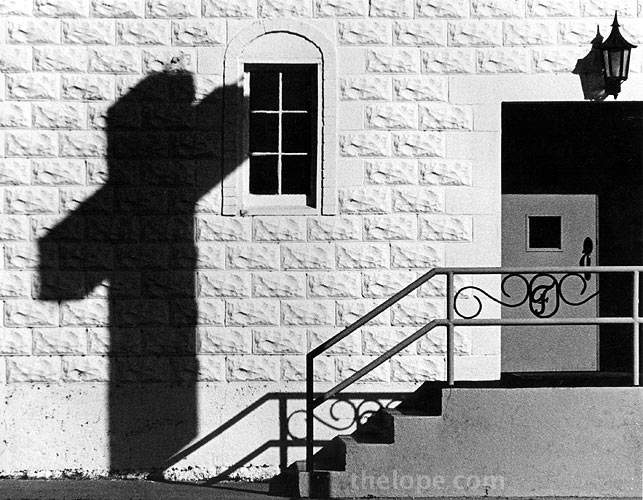 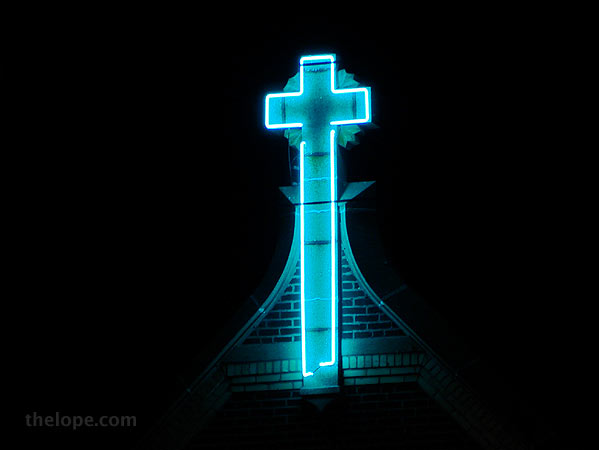 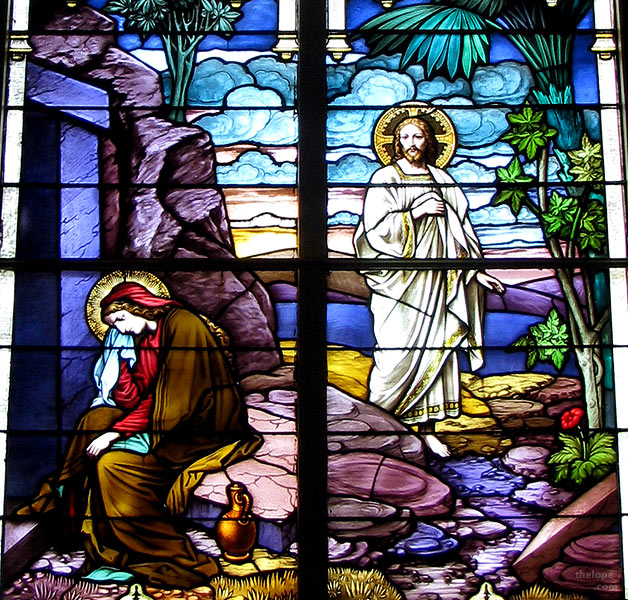 Here is a detail from a window of St Teresa Catholic Church in Hutchinson, Kansas. 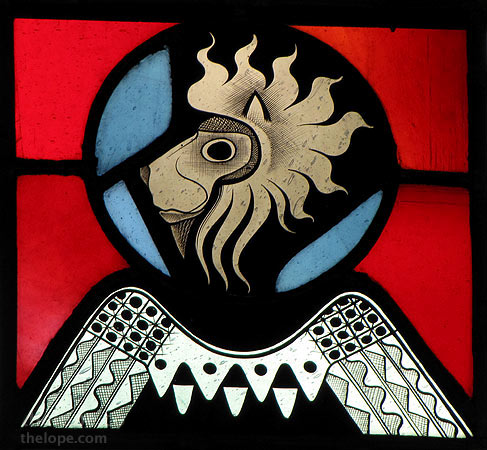 Three Easters ago, I was greatly relieved at the news that Patsy Terrell did not have cancer. She'd been hospitalized in Wichita's Via Christi hospital, which has a wondrous chapel at its core. I stayed with her in the hospital and visited the Chapel of the Sorrowful Mother often during that anxious time. Happy Easter, and please enjoy the hidden chapel.

posted by Ace Jackalope at 1:33 AM