The Lope: Yes, and Yes again this Summer

Yes, and Yes again this Summer 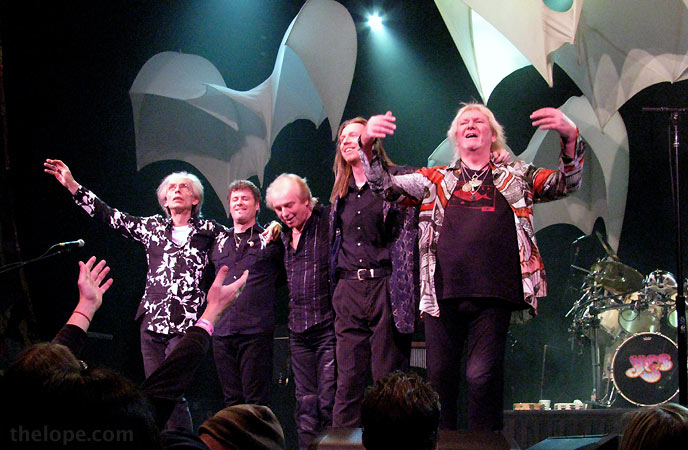 I saw my umpteenth Yes concert Tuesday night in Dallas at the House of Blues. The band served up tasty helpings of prog rock goodness, despite some audience members who bellied up at the table more for the beer.

Band members told me that plans are being made for a Yes U.S. Summer tour in June.

(updated March 4: Peter Frampton is scheduled as co-headlining the tour, the first dates of which are now posted on the Yes website.)

I'm crossing my fingers for some Midwest dates, including, I would hope, the untapped-for-years markets of Wichita, Tulsa, Little Rock and Omaha as well as tried-and-true Kansas City and St Louis. C'mon guys, give my friends and I another excuse for a road trip.

(Update: May 21: they're doing an Oklahoma show at the Lucky Star Casino in Concho. Tickets are available through ticketstorm.com.)

Oh, see that backdrop above them? It's by artist Roger Dean, which means you shouldn't be surprised to see a similar design show up uncredited in the next Avatar movie.

posted by Ace Jackalope at 5:48 PM