We've been favored by a hoar frost twice in January here in Reno County, Kansas. First on the 12th, and again today. 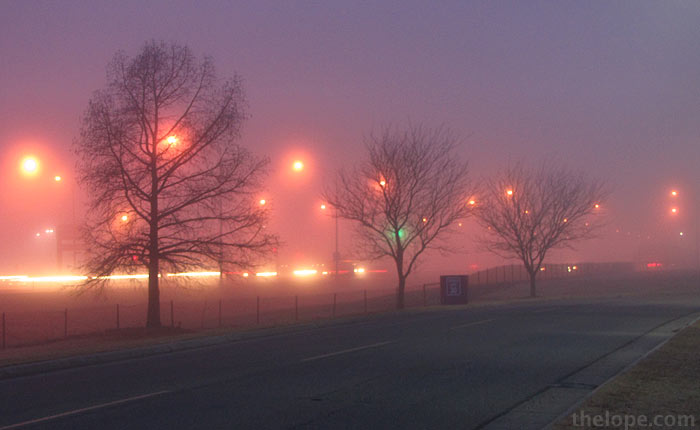 For a hoar frost, you need moist air and we've had lots of fog this month. Hoar frost happens when the freezing fog condenses on things that have lost enough heat to be below the dew point of the moist air. I've also heard this referred to as "freezing fog", but "hoar frost" is more specific for what's happening now. A hoar frost isn't your standard fuzzy little coat of Winter white. The crystals are substantial and spiky or feathery. Around here, it has the advantage of being beautiful but not particularly dangerous in and of itself. The road in this picture on the 12th was not iced, but the tree was frosted. Today, however, many of the streets here in Hutchinson are still icy from the weekend's snow so if you drive out to see the frost, be careful. It looks like the trees have been flocked, as if for Christmas decoration. I've read about advection frost, which occurs when cold wind blows over branches and crystal direction is influenced by the wind. Since these crystals were somewhat sideways as if shaped by the north wind, I wonder if that was what was happening here. Perhaps a meteorologist could comment? And here's some of that sideways action on a seed pod. 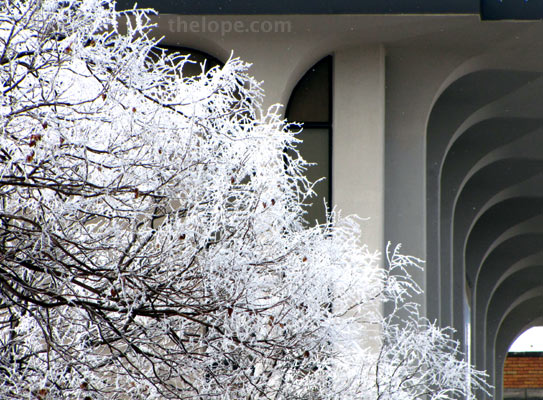 It can be a fleeting thing. A few minutes after I took this picture in downtown Hutchinson, the sun came out enough to warm the branches and the frost was gone within 30 minutes. Hoar frost looks great in the sunlight against a deep blue sky, but I was not able to be out and about during that brief window on the 12th. Here are trees beside the Arkansas River. It's a wondrous effect. If the hoar frost is still out there when you read this, grab a camera and go outside. Remember to play with the exposure compensation a bit in favor of more exposure as there is a lot of white in such photos.

It strikes me that the term "hoar frost" is best spoken in a pirate voice: "Arr, thar be a hoar front upon the mizzen mast." Try it; it's fun.

posted by Ace Jackalope at 9:12 AM

wow...... I spent the last three to four hours going through your blog.... i could never find a well photographer to show kansas area more down and personal. you take great pictures of the things i been wanting to capture for awhile.... of things i try to find online to show with friends that don't live in this area. there is way more to kansas.... yet no one see's that.... but maybe if they come here to your page... mad props~